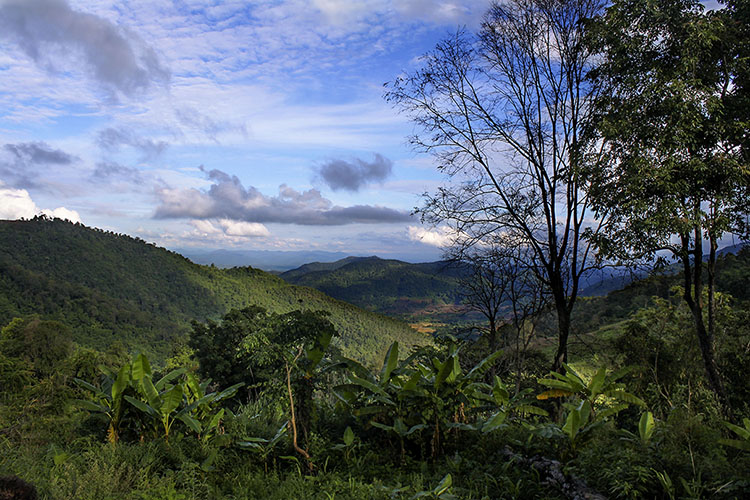 We’re back! Still alive and fairly unharmed from our 3-day jungle expedition (a few mosquito bites more, a pair of shoes less – bringing our trip shoe casualty count up to 3). The trip was a lot of fun and well worth it! 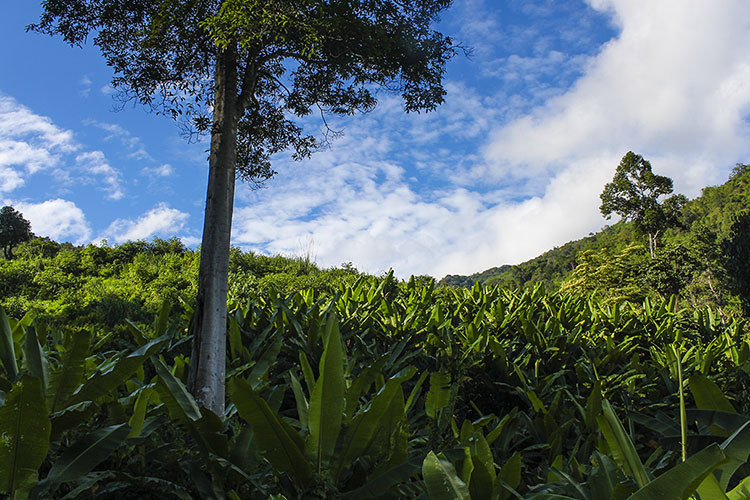 Meet our crew: an Irishman who loved to chat about drinking, a delicate girl from California, a German fellow who took pictures of flowers for his grandma (and was much suprised by our ability to speak some German) and a British girl studying “fashion” who hiked in her converse shoes. And then our guide, Noomthai, who was a jungle warrior himself. He trekked through every type of landscape in flip-flops, carried a handmade slingshot, and had a machette that he could do EVERYthing with – including fashioning us shot glasses out of bamboo. He wore an army wife-beater, bandana, and would bathe naked in the river in the evenings by candlelight. BA. 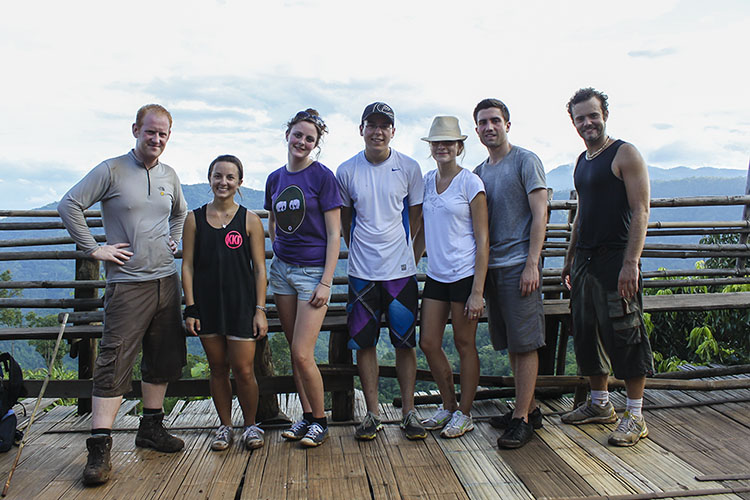 On our first day we rode elephants. This would have been fun, but I felt bad for the elephants so I didn’t get much enjoyment out of it. They were chained at the neck and feet, spent the day walking the same track, and were repeatedly hit with a sharp instrument to keep moving. It was heartbreaking and I felt guilty doing it. 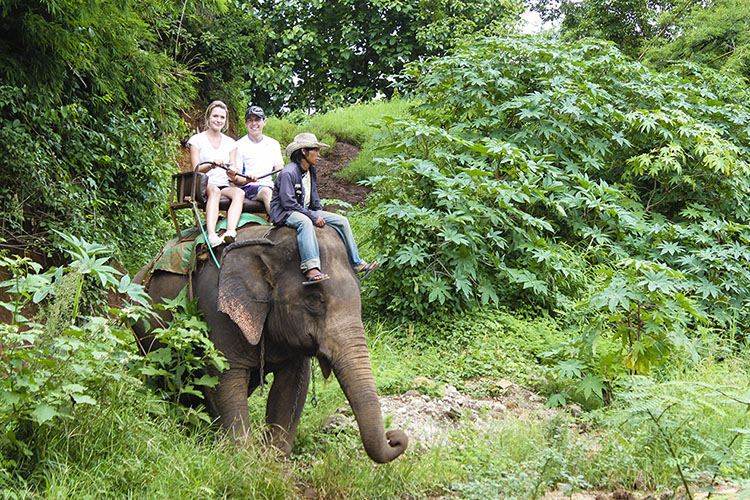 After this we did a gorgeous 3 hour trek through the jungle to get to our hill tribe, where we’d stay for the night. It was all uphill, so the views were great. Noom found us Venus fly traps to play with and showed us how to blow bubbles out of plant stems. We also gained a traveller, Bow Wow, a raggedy dog from the forest that led us most of the way.

The Lahu hill tribe was nice to visit – it’s always interesting to see how well people can live off the land and be so innovative with what they have. Everything is made out of bamboo – the houses, utensils, ladders, bridges. And their “farm” animals are everywhere – pigs and chickens wandering all around the village. We were very lucky, and had a gorgeous view from our hut: 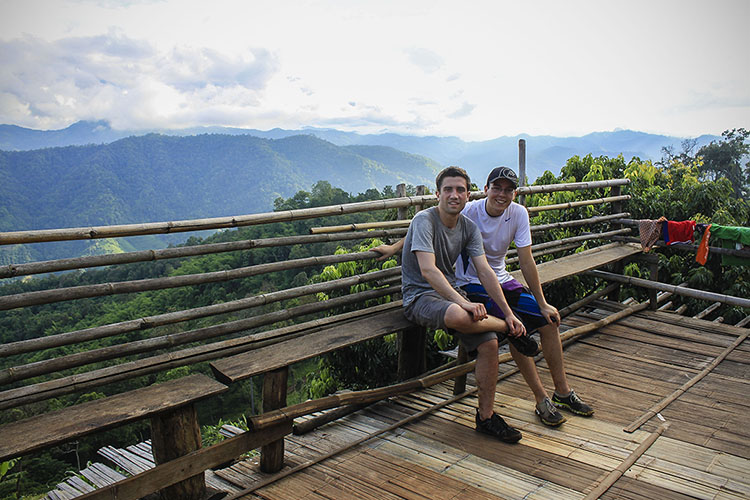 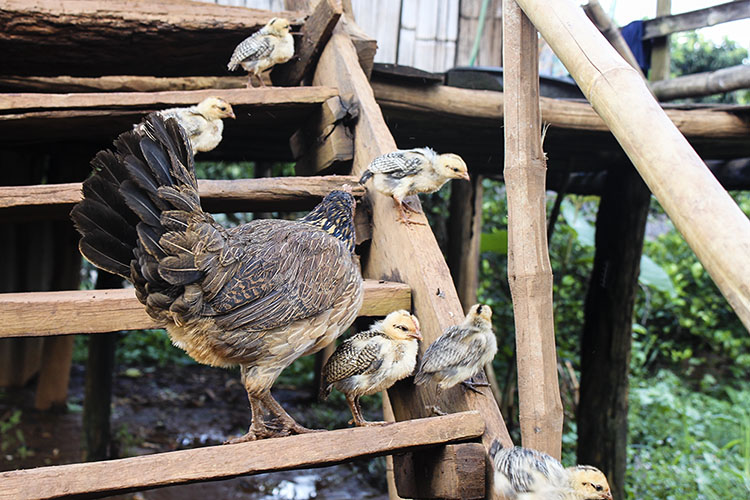 After dinner, we relaxed in candlelight and listened to Noom serenade us with his guitar, trying to sing songs in English. He started off with playing “Zombie”, and the night was made already. He ended up passing around some village moonshine to share as well. 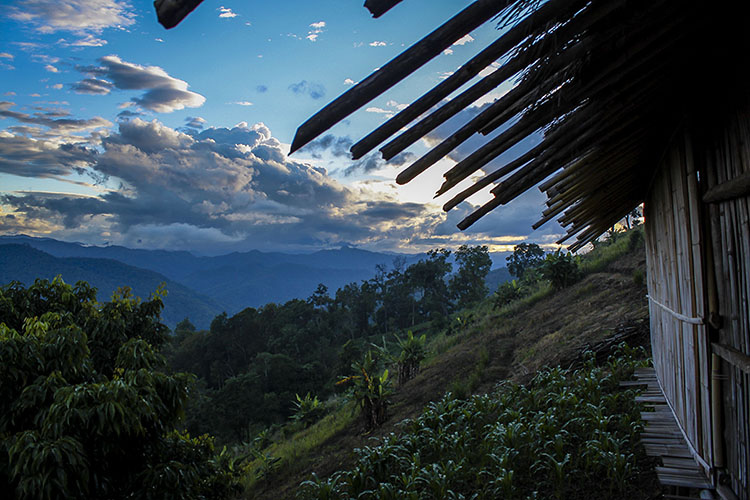 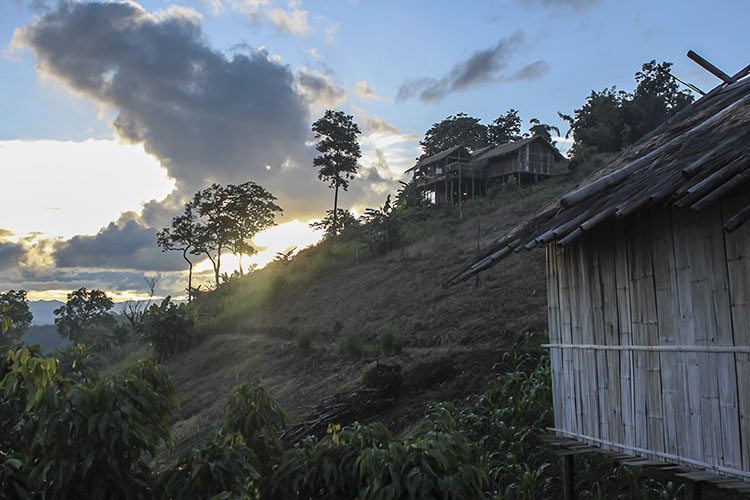 Our ‘hotel’ for the night was a hut made out of bamboo. I’d describe it as sleeping on a deck. Thankfully we had mosquito nets, not only for malaria but to keep out the other bed bugs as well… you know how bugs and I do not get along. 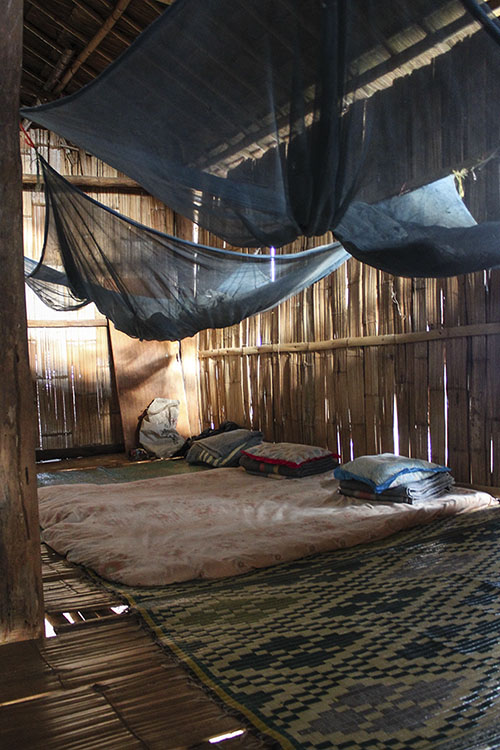 The next day was waterfall day – we spent the day hiking to various waterfalls in the area and going for a swim. Some falls you could stand right under, and others had good areas for mini ‘cliff-diving’. Shane was even able to use one waterfall as a slide. Eventually we got hold of Noom’s slingshot and had a beer-can hitting competition. (The German guy won – in case you were interested). Noom was talented enough to hit us down some fresh mangoes from the trees around the waterfall, so we were able to enjoy these as an afternoon snack! 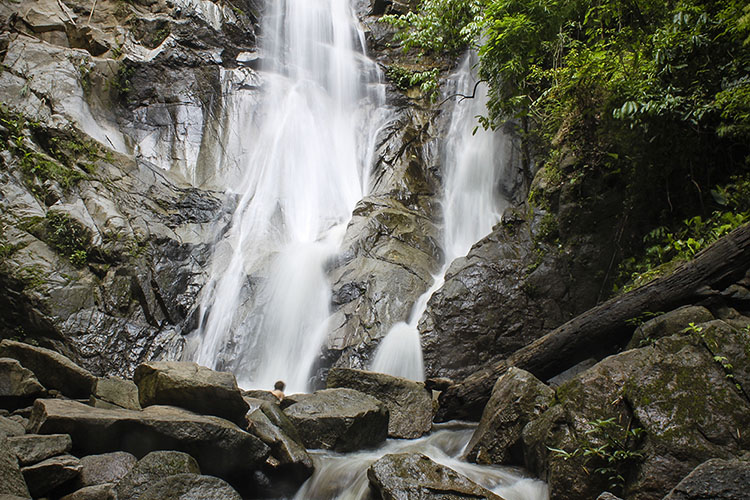 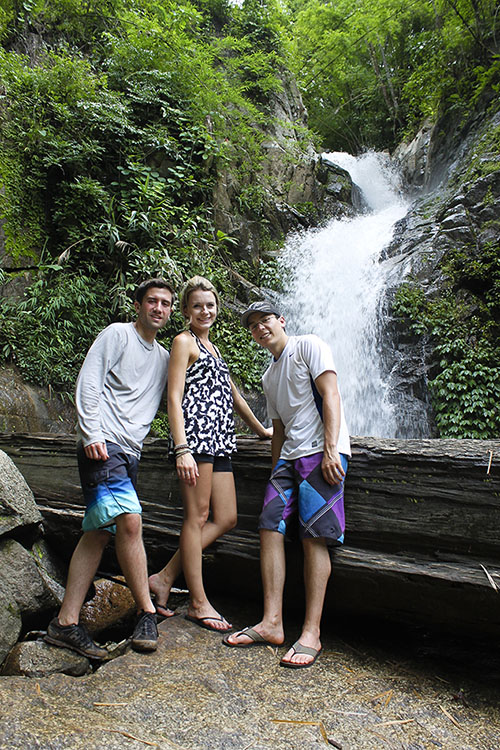 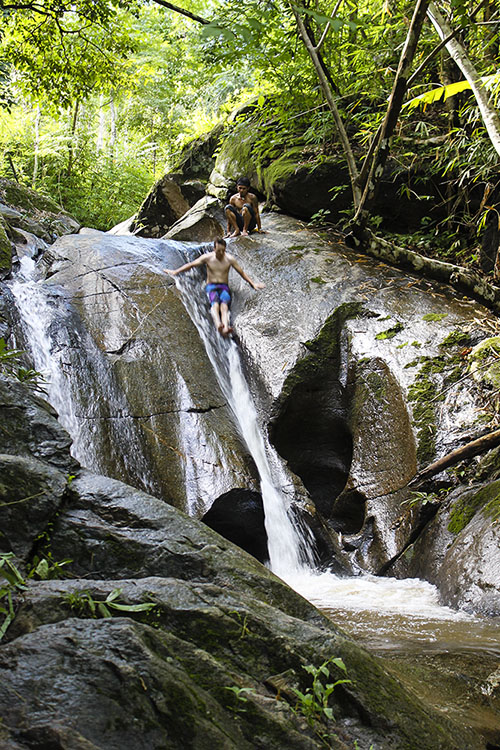 After our day of bathing, we stayed in a small camp along the river. We had a lot of friends here – five baby kittens (you would have loved them Cloe!) and a toad named Franklin. The hut was a bit more ghetto than last time, and our Irish friend unfortunately woke up realizing he was sleeping on top of an ant nest in the middle of the night! No fun. We made a campfire out of bamboo (that’s a first!) with some dranks, and chatted while listening to Bob Marley all night.

Our last day started off with a small hike again. The morning fog was quite pretty: 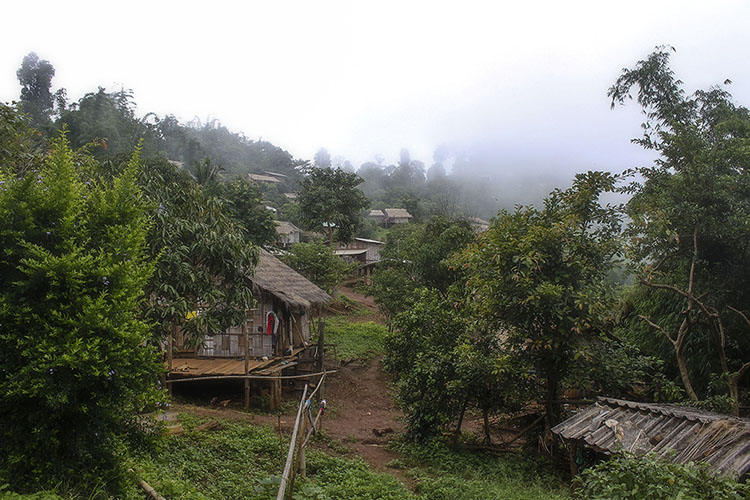 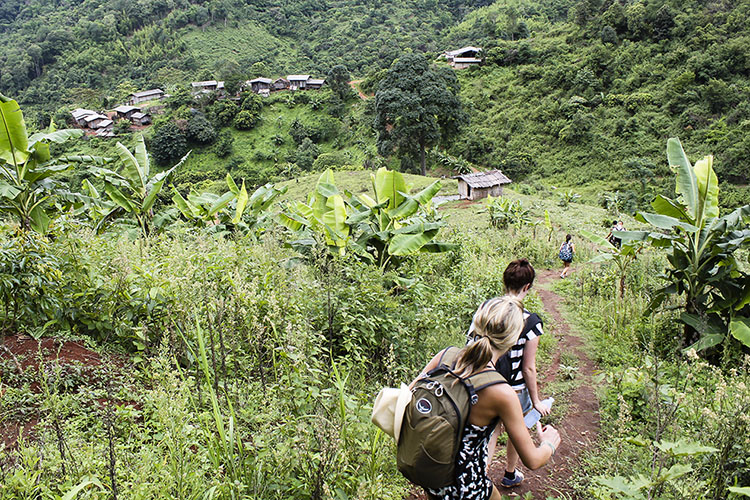 We stumbled across quite a bit while trekking: random green tea plants, lychee trees, chili pepper sprouts, and rice fields. And all sorts of brightly colored bugs I’ve never seen anywhere else. Not much wildlife though, which was suprising… just plenty of dogs and cats. 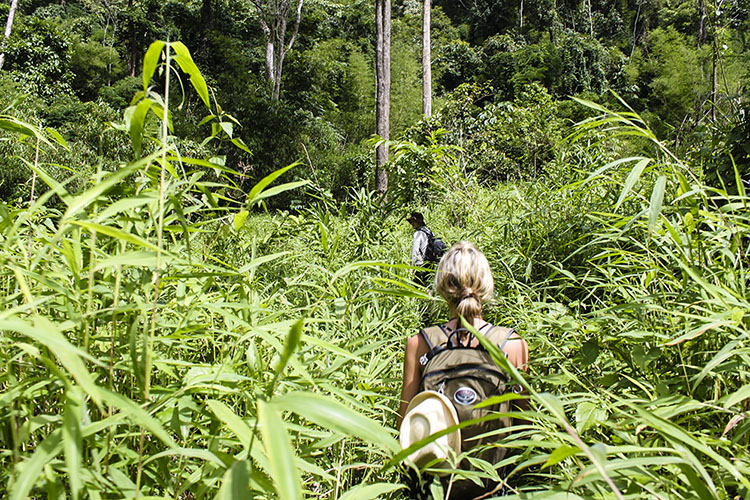 The end of our hike took us to white water rafting down the river. It was Andy’s first time so that was fun! We went bamboo rafting right after this, which Shane directed by standing at the head of the raft with a huge stick of bamboo.

Sadly, this wrapped up our trek and we were dropped back off at MD House to have the best shower of our lives. We’ve since done our laundry and are now getting ready to go out and meet our trekking buddies for a drink. I learned not to try to save money by buying the local vodka… it is absolutely terrible. Back to Smirnoff it is!