Slovenia has only 50 km of coastline, and its seafront jewel is the town of Piran. Piran is like the mediterranean city equivalent to Rovinj and – like Rovinj – Piran was also part of the Venetian empire. This means that a visit to Piran gives you the taste of Venice with lower prices and fewer tourists.

Piran is a small town (population of 3800) built onto a narrow peninsula that juts out into the sea. The town is almost entirely car-free, which makes sense when you meander through the maze of tiny alleyways which seem to make up the majority of the town. 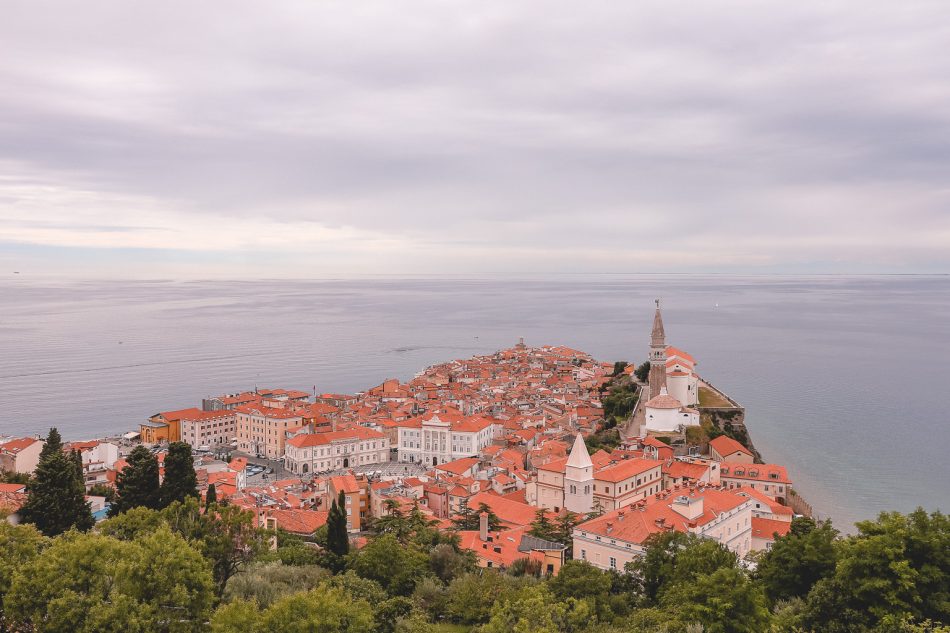 The most beautiful parts of Piran are composed of the waterfront promenade, which you can use to walk around the entire peninsula. From the promenade you can reach the boat-filled pier in one direction, or endless coast of pebble beaches in the other. 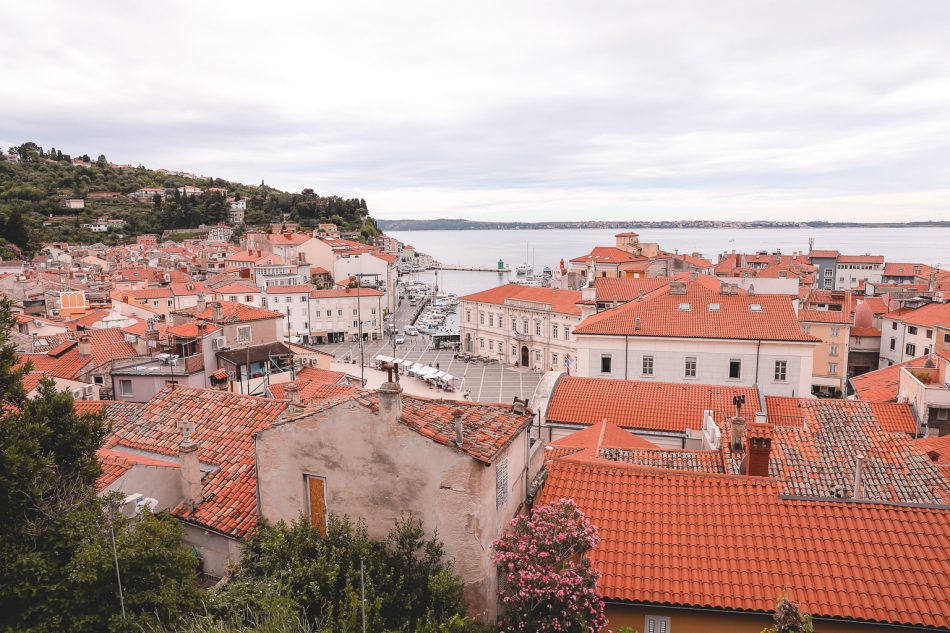 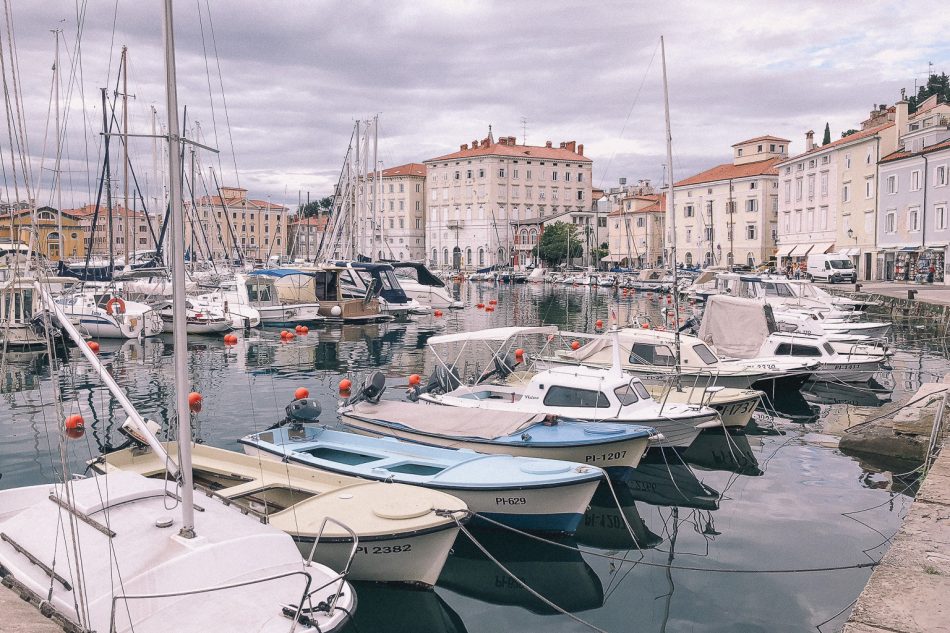 Though there are no true sandy beaches in Piran, you’d never know that by visiting. Locals and visitors lay all over the large rocks that make up the coastline. A short walk outside of town will bring you to some rocky beaches, which we made sure to enjoy. Although if you venture too far, you do enter nudist territory… (I’ve warned you). 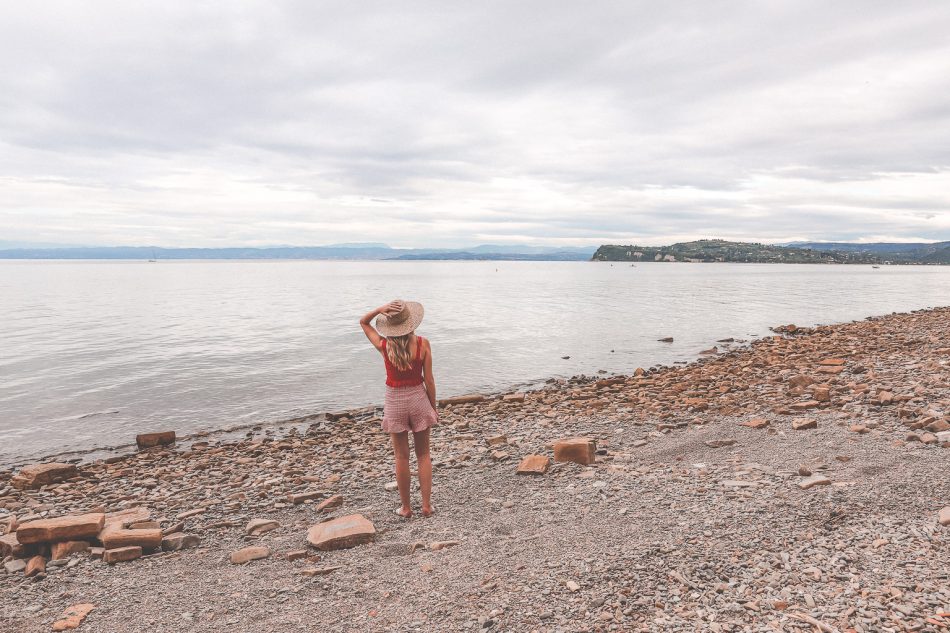 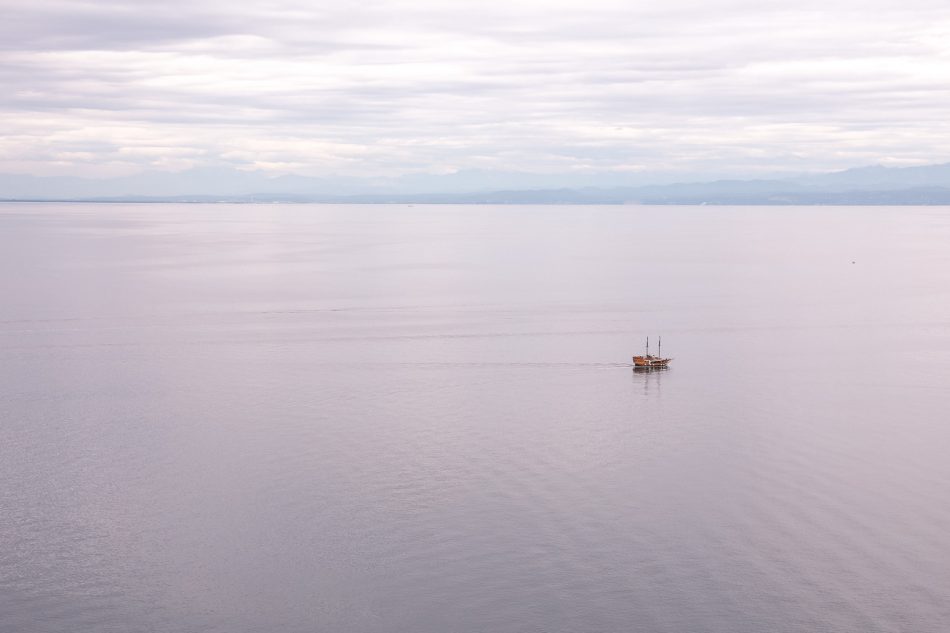 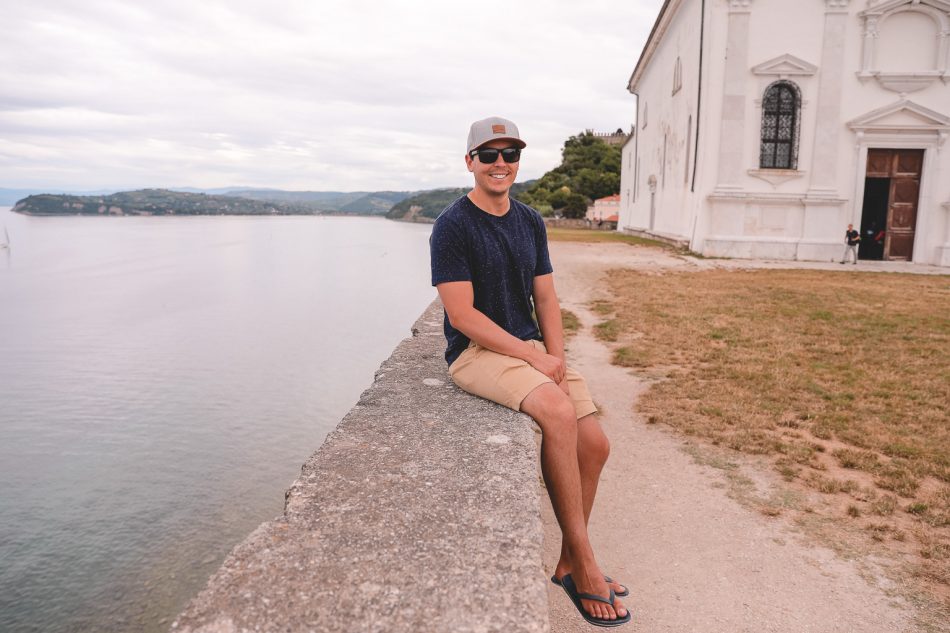 Most of Piran’s town centre buildings are a little dilapitated with a rustic Venetian feel. On the other hand, Piran’s main square (Tartini square) is a large, beautiful marbled plaza lined with pastel coloured buildings. It’s filled with patios from nearby restaurants, musicians, and children playing in the large central plaza. 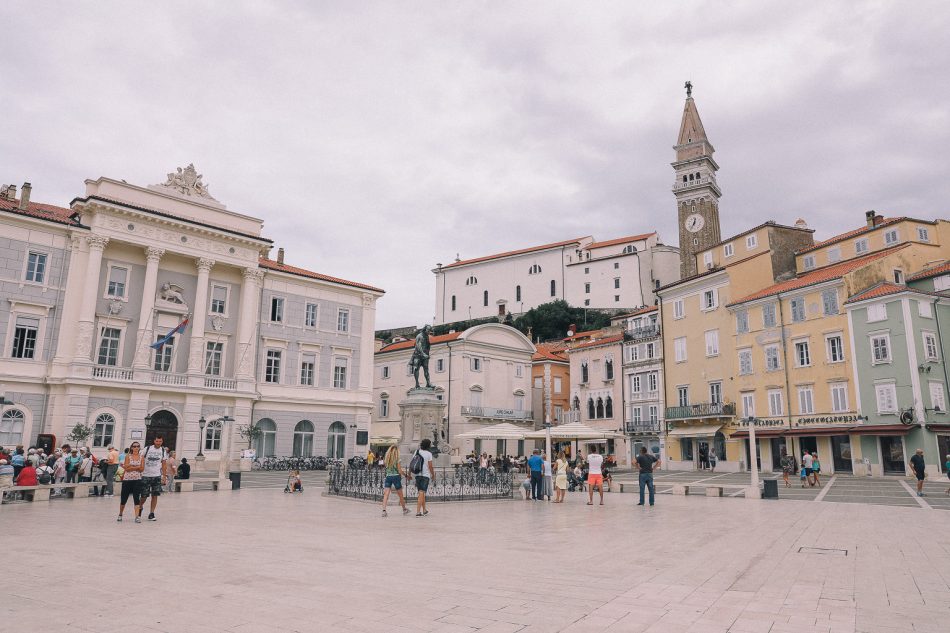 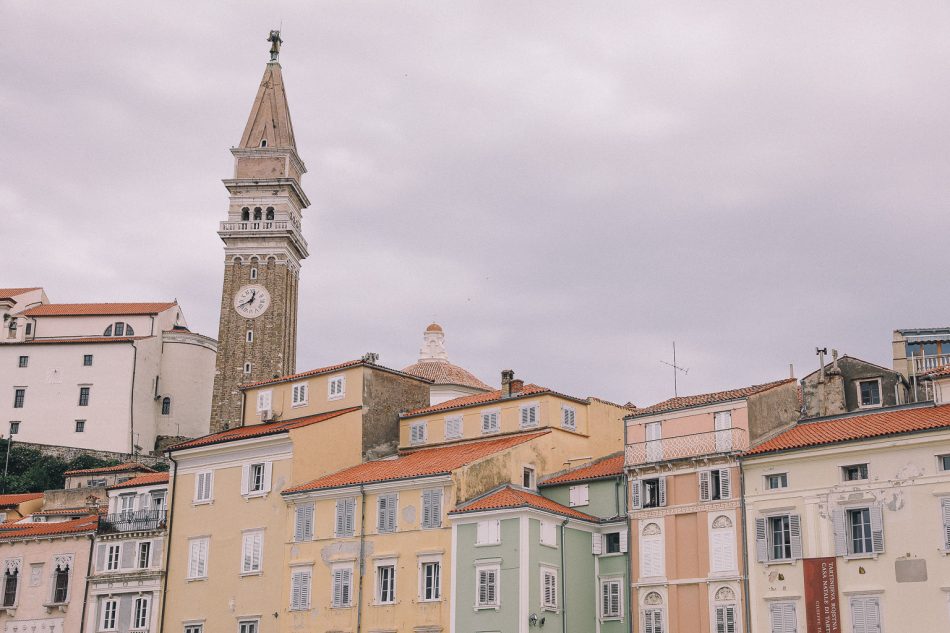 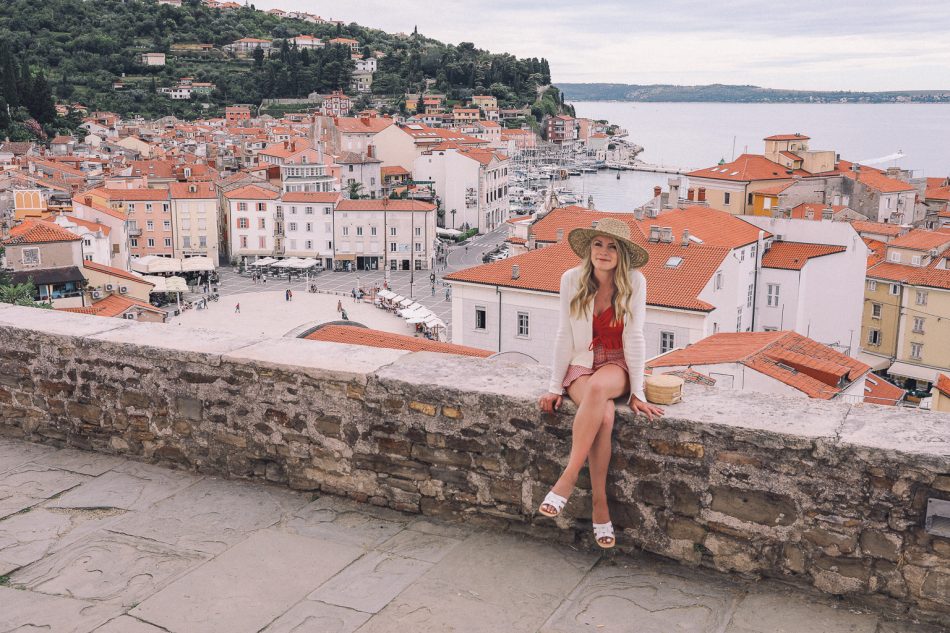 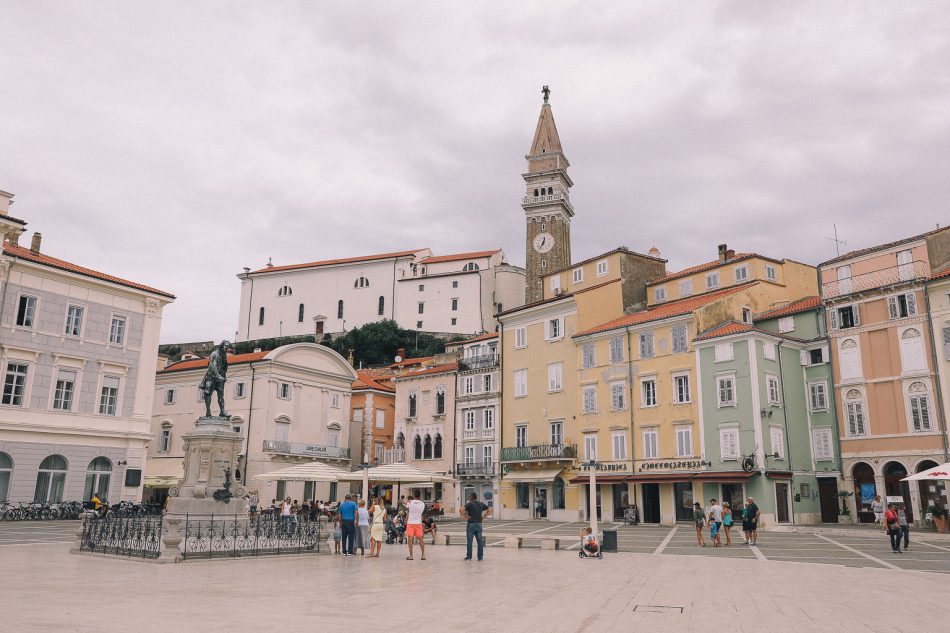 Piran is a town made for meandering, with little on the “must do” list. A perfect day would consist of people watching with a coffee in the morning, an afternoon dip in the sea and stroll through old town, and an evening enjoying fresh seafood on the waterfront watching the sun go down. 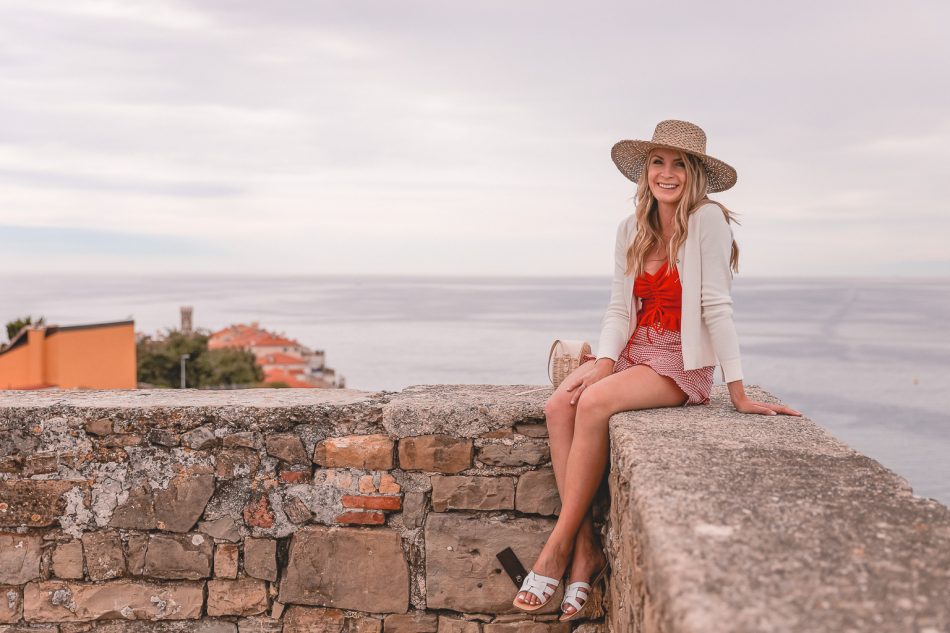 Our highlight of Piran had to be Shane receiving some great news. While we were planning on celebrating in Ljubljana (where we are headed next), he received news of passing his licensing exams one day early while in Piran. After so many years of training, he has officially completed residency! 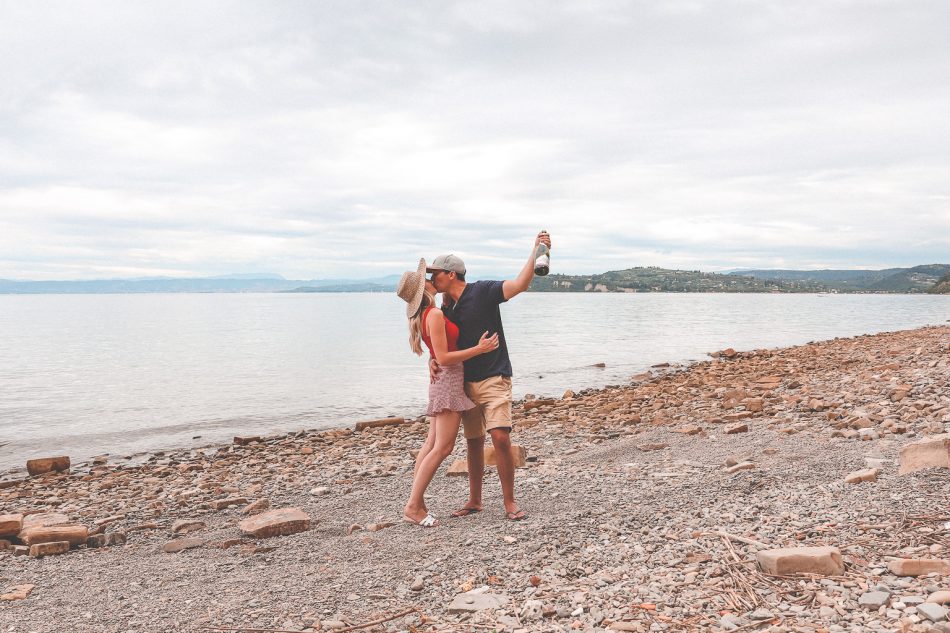 We popped champagne on the beach, and celebrated late into the evening watching the sun set from our balcony. It was a wonderful day!

By the way, I should also states that this part of our travels officially kicks off our tour of Slovenia, where we will be spending the majority of our trip! 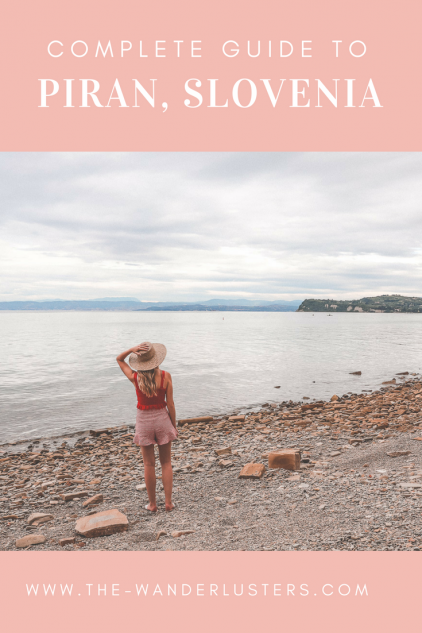