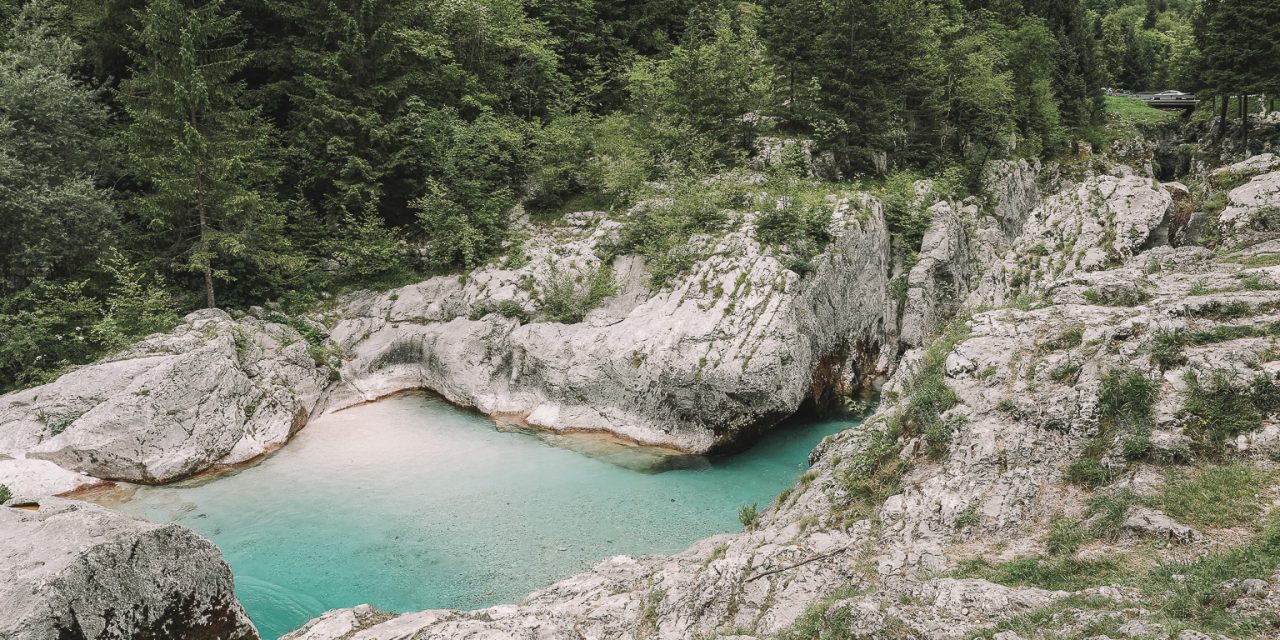 In the Alps of northeastern Slovenia is Triglav National Park, named after Mt Triglav, Slovenia’s highest mountain. The park is full of rocky mountain peaks with pretty valleys, alpine meadows, gorges, and waterfalls in between.

While we could have spent an entire week exploring the area, we drove through the park over a couple of days while staying in Lake Bled. 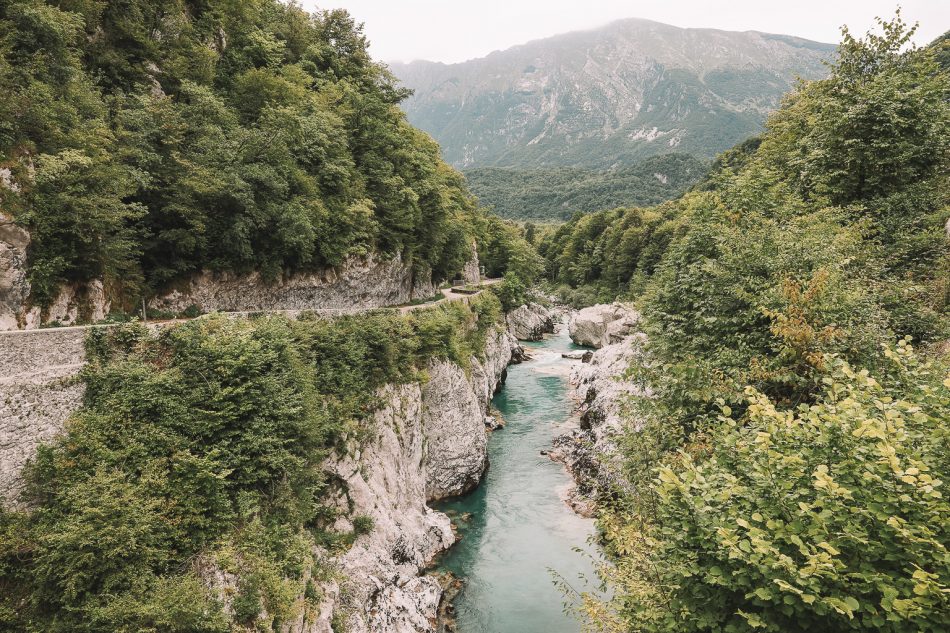 We’ve mentioned the Soca river already, but this emerald green glacial river courses through Triglav National Park, carving canyons and pools along its way. The river draws many for adventure sports like kayaking, rafting and canoeing. We kept it simple given our limited time, and did a short hike along the Great Soca River Gorge. 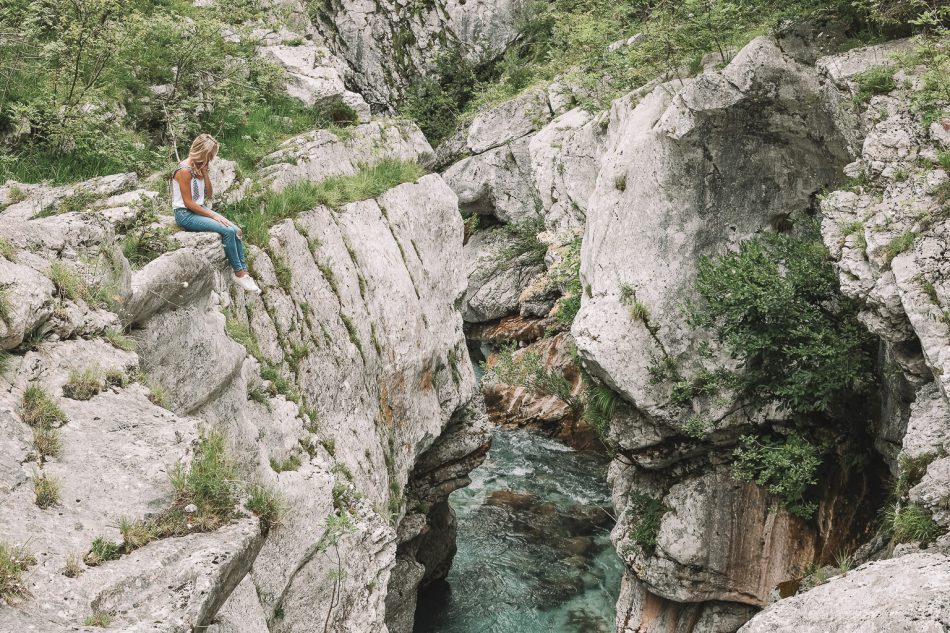 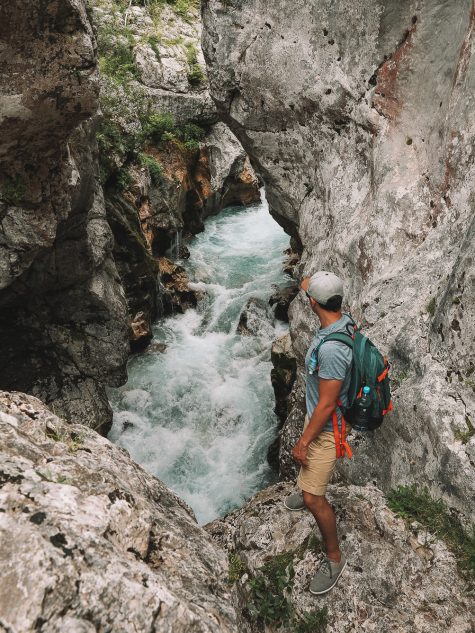 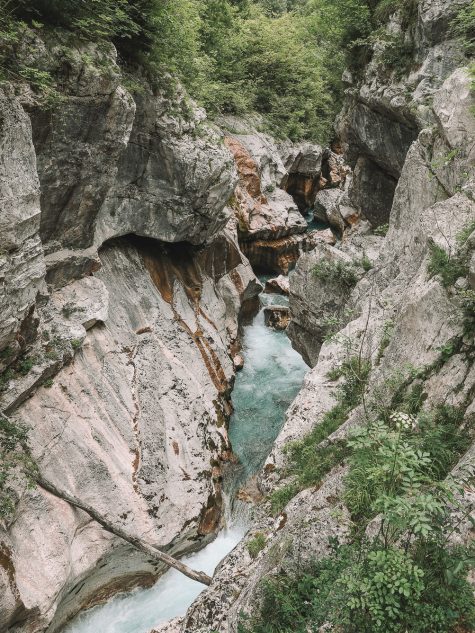 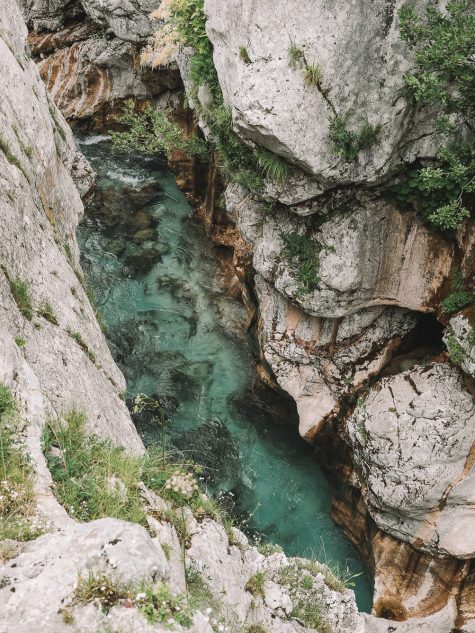 At the end of our hike was an open area where the river slowed and people were cliff diving into the cool refreshing water. We wished we had packed our swimsuits to join them! Instead, we enjoyed lunch on the rocks while critiquing who had the best dive in. 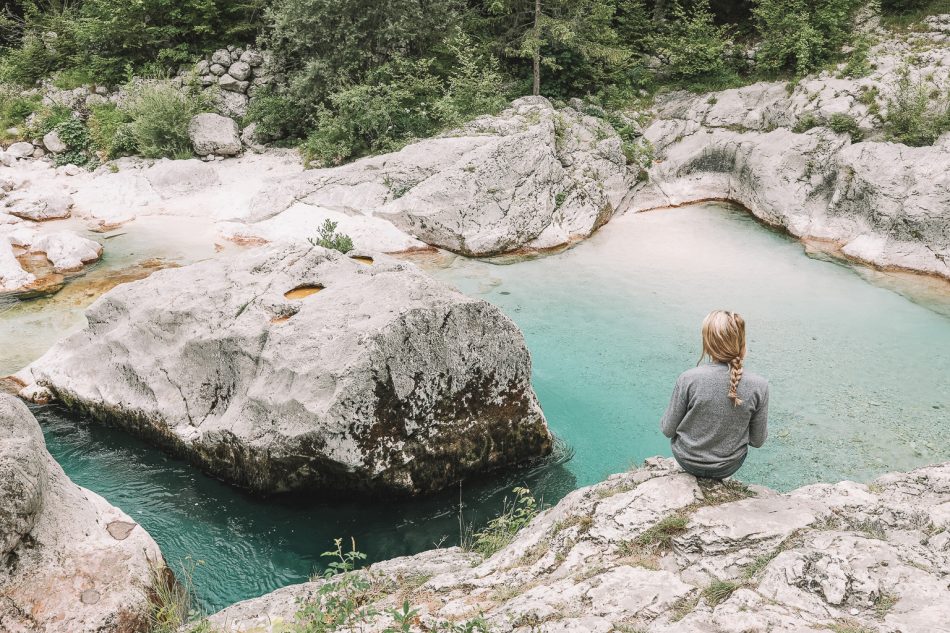 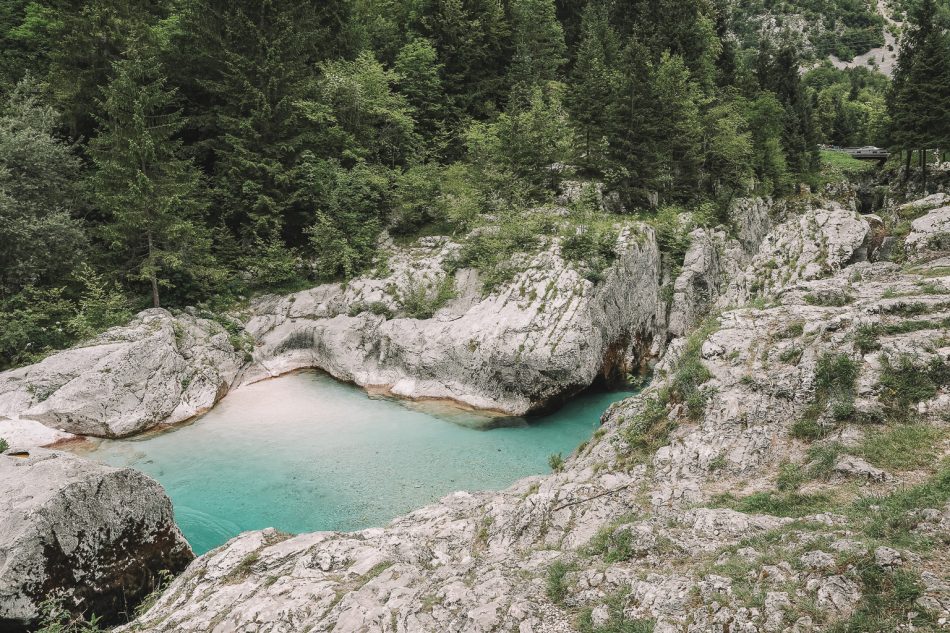 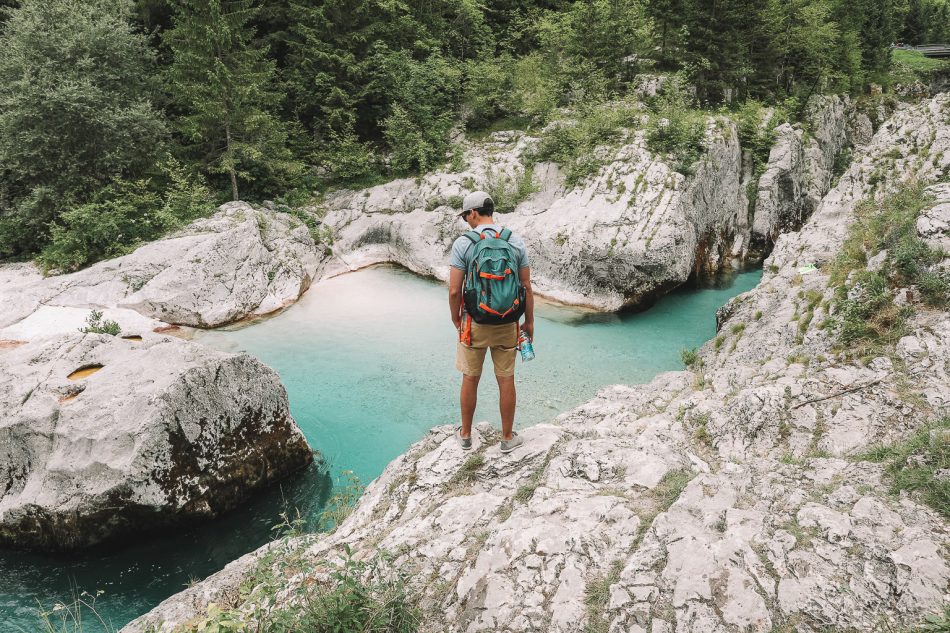 Extending over a narrow portion of a Soca river is the stone-arched Napolean Bridge, aptly named because Napolean and his troops marched across it. However, the bridge was built long before Napolean, likely dating back to 1616. Over the course of both World Wars, the bridge was destroyed and rebuilt multiple times. It is now a Slovenian cultural heritage site.

Looking over the edge to the river below makes the structure seem even more impressive! 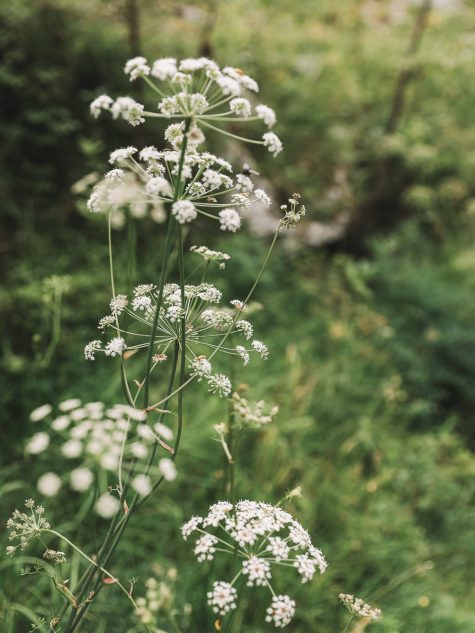 Anywhere you have mountains, you are bound to have a mountain pass. Triglav National Park is no exception; often named one of the most beautiful mountain roads of Europe, Vrsic Pass runs right through the park over the Julian Alps. The pass has exactly 49 sharp hairpin turns (with signs to help you countdown every single one) to make the 1611 meter climb over the mountains. 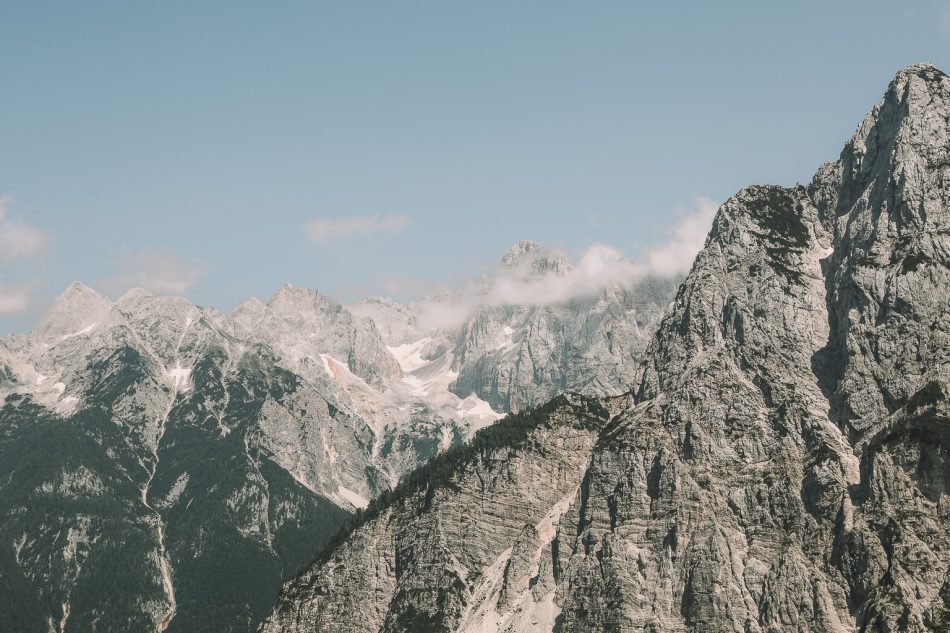 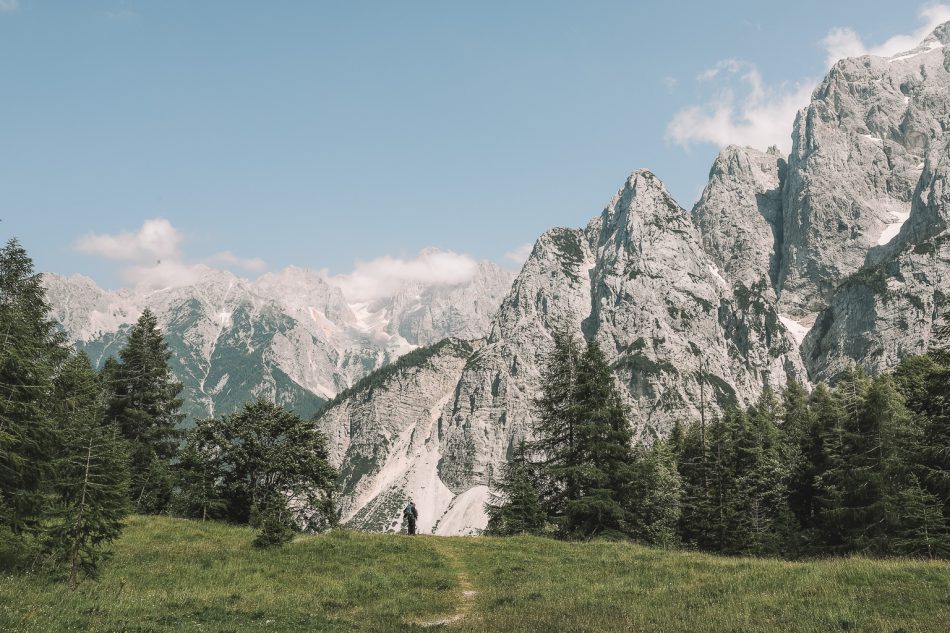 Only a few kilometres after finishing the impressive Vrsic Pass you are greeted with a calm lake at the base of the mountain. Lake Jasna is actually made of two artificially made lakes connecting two mountain streams.

And what we thought might be a remote mountain lake turned out to be a popular spot for sunbathing and swimming. It was tempting to sit at the little lakeside bar and have a beer, but we had other sights to see! 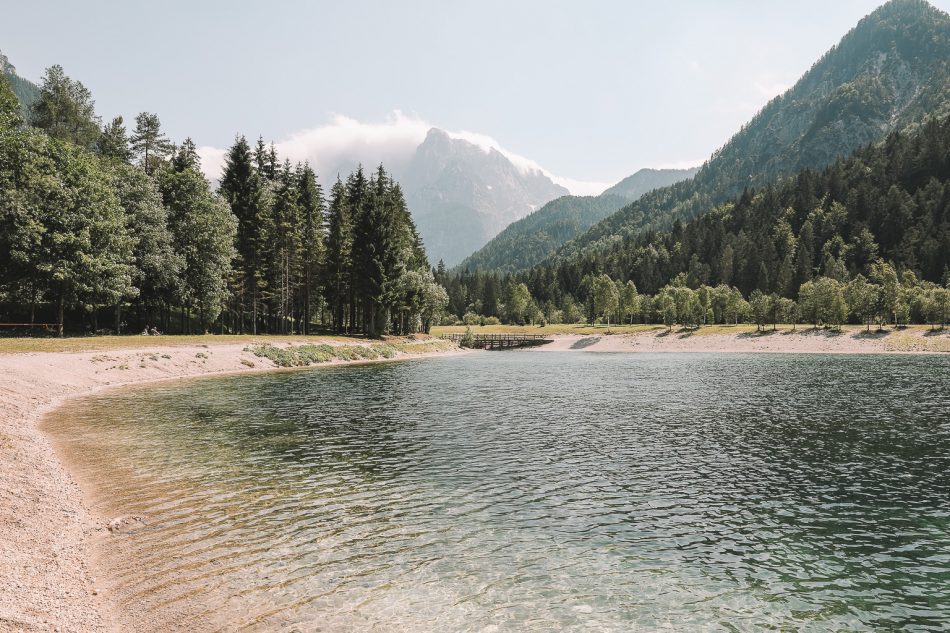 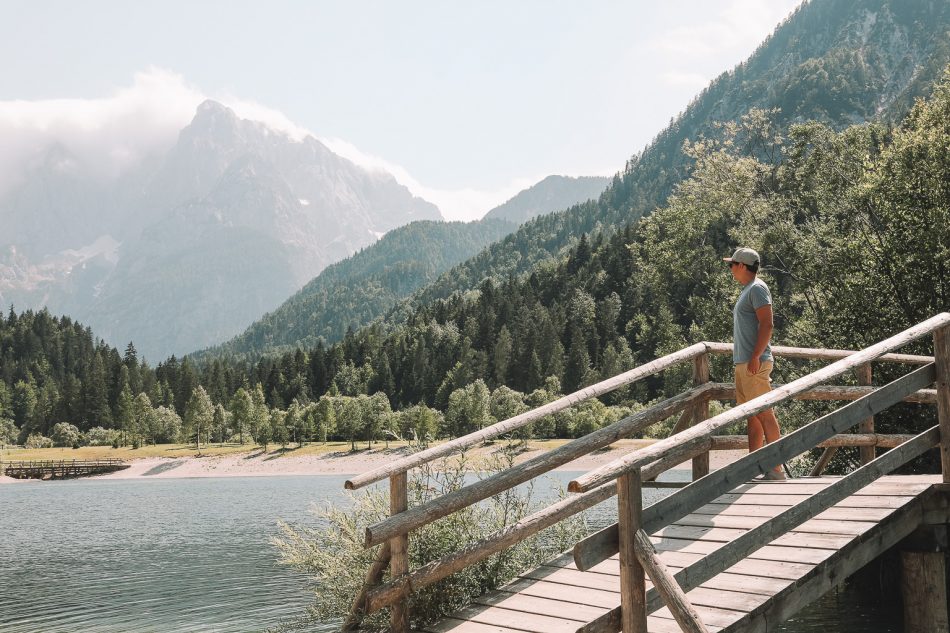 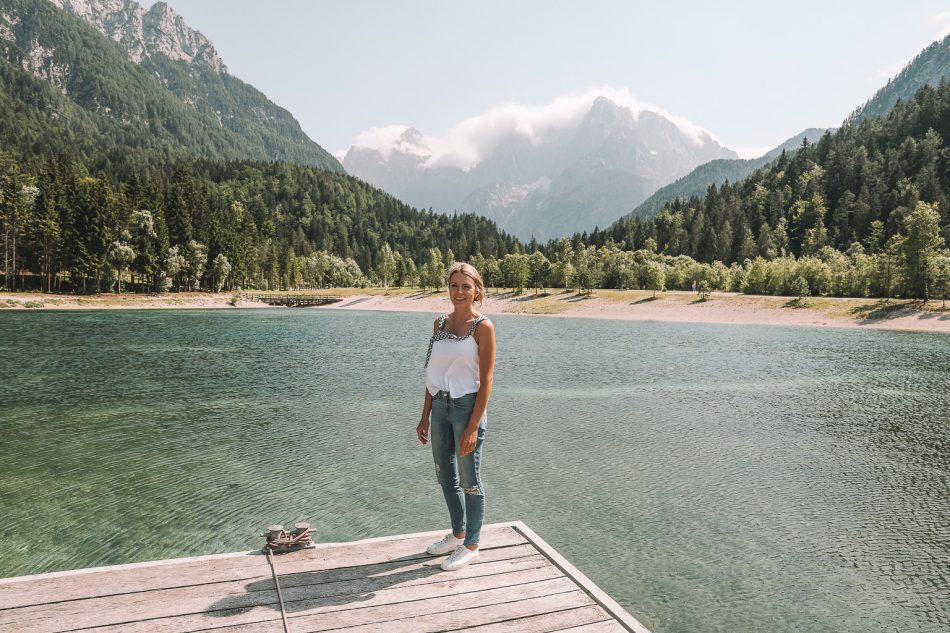 Not from from Lake Bled is Vintgar Gorge, a canyon carved by the river with a series of waterfalls, rapids and pools. Of everything in Triglav National Park, this is the most developed sight for tourism. The gorge, originally impassable, is now accessible via a series of boardwalks built into the canyon walls. It’s reminiscent of Johnston Canyon in Canada. 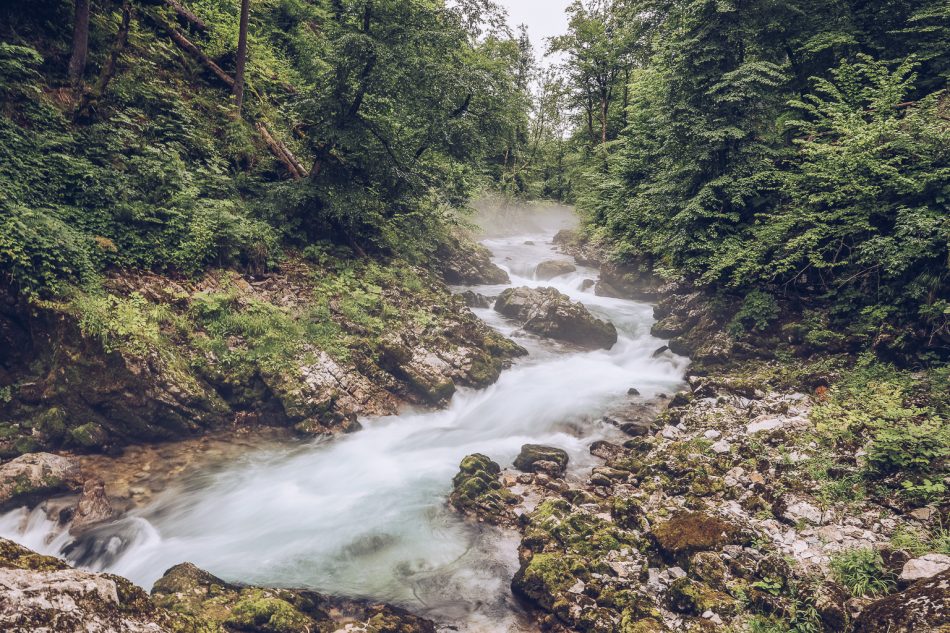 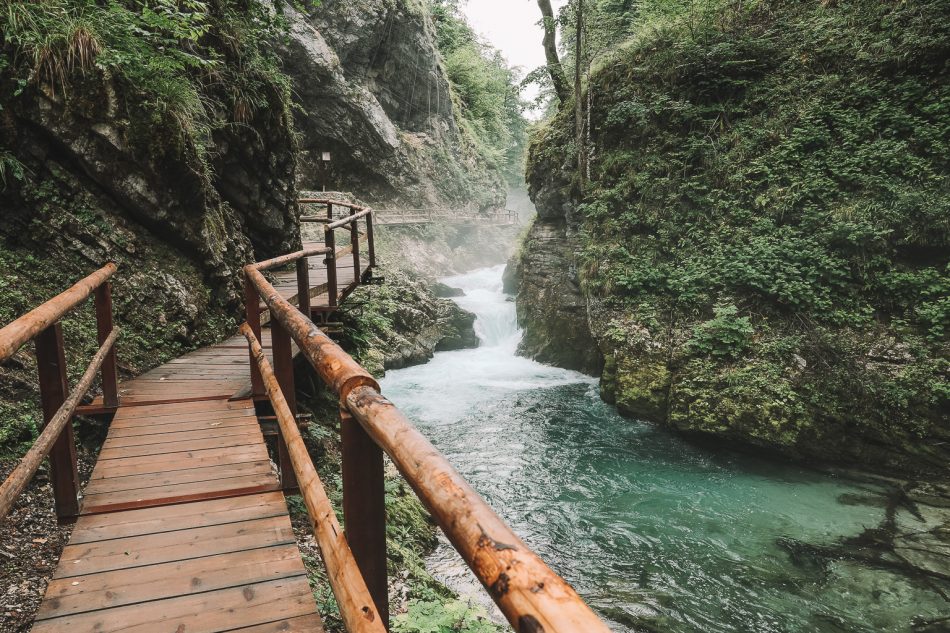 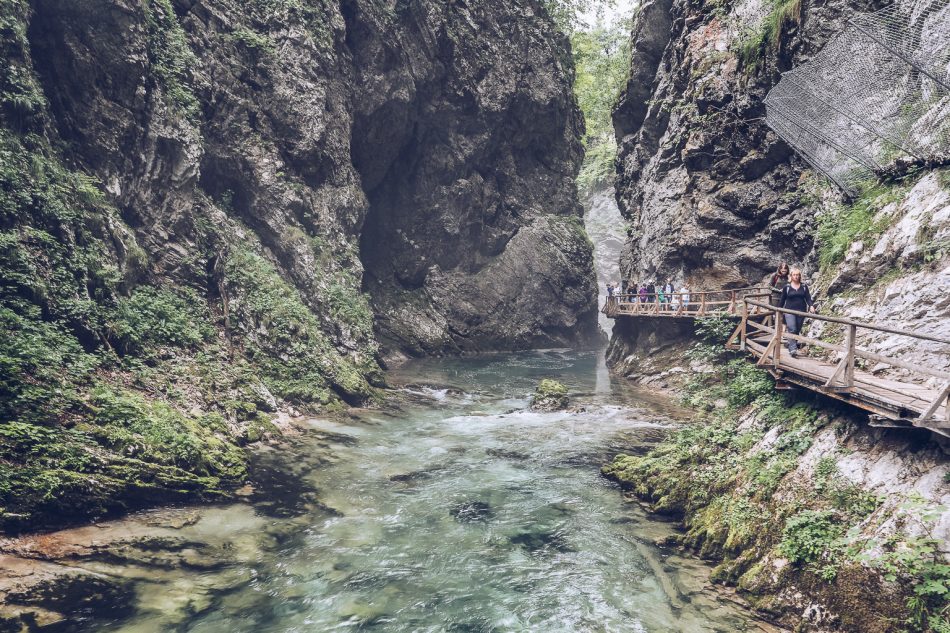 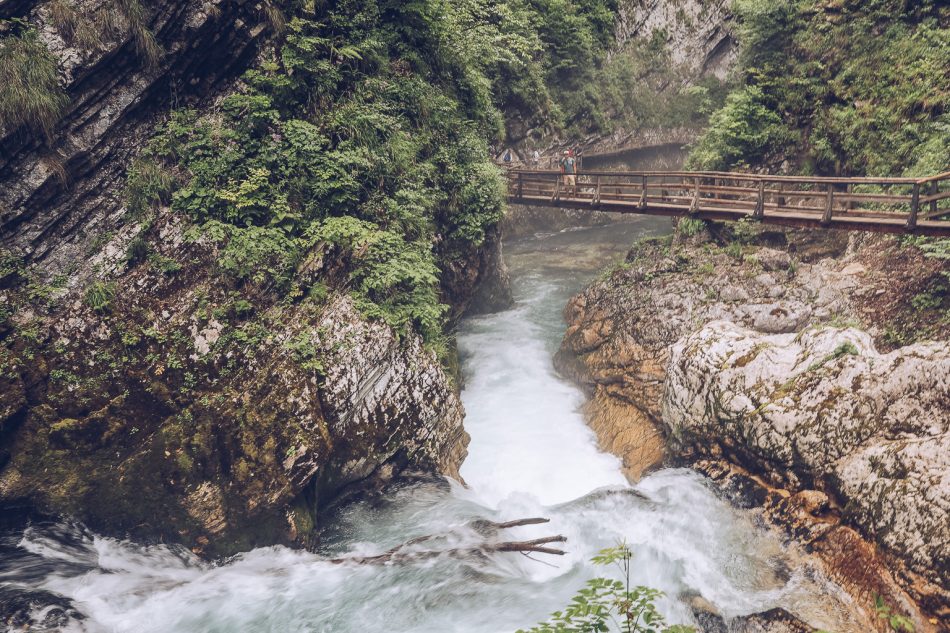 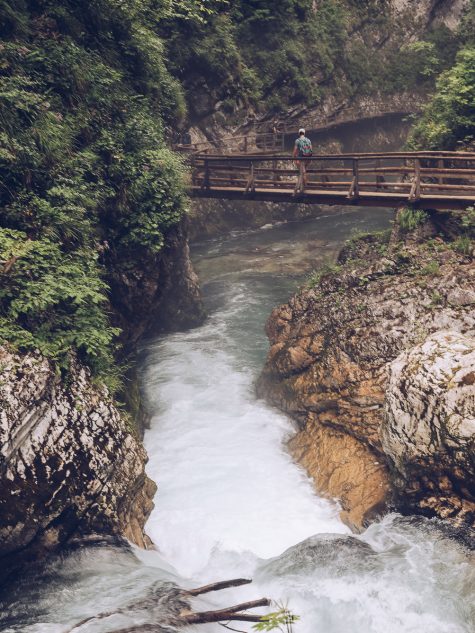 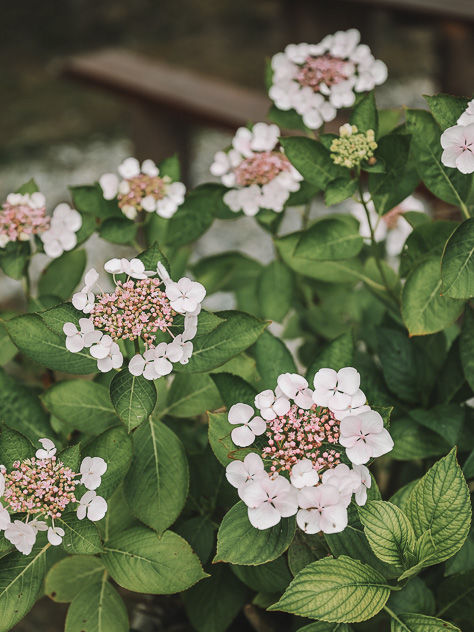 The gorge is a 1.6 km walk in total, ending with a 13 meter high waterfall. We’d recommend going early in the morning, as I can imagine the boardwalk would get very crowded as the day goes on.

Battle of the Lakes: Lake Bohinj

Lake Bohinj is the rival to Lake Bled, with some saying it is even more beautiful than the latter. Though we think Lake Bled still takes the cake, this lake is definitely worth a visit. It is the more natural and less crowded of the two. Sadly, we were rained out for the day, limiting our ability to enjoy the lake and its nearby attractions. 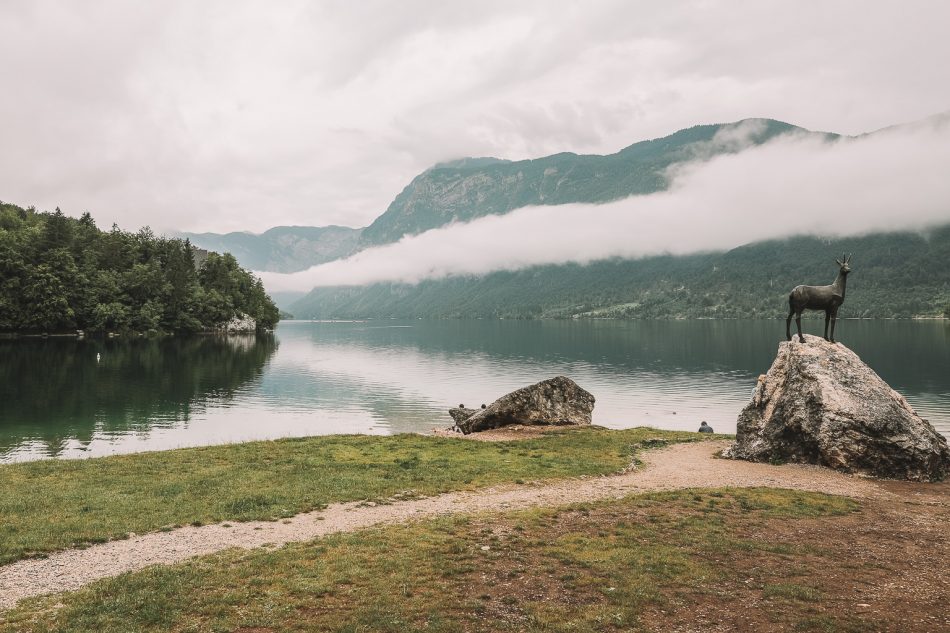 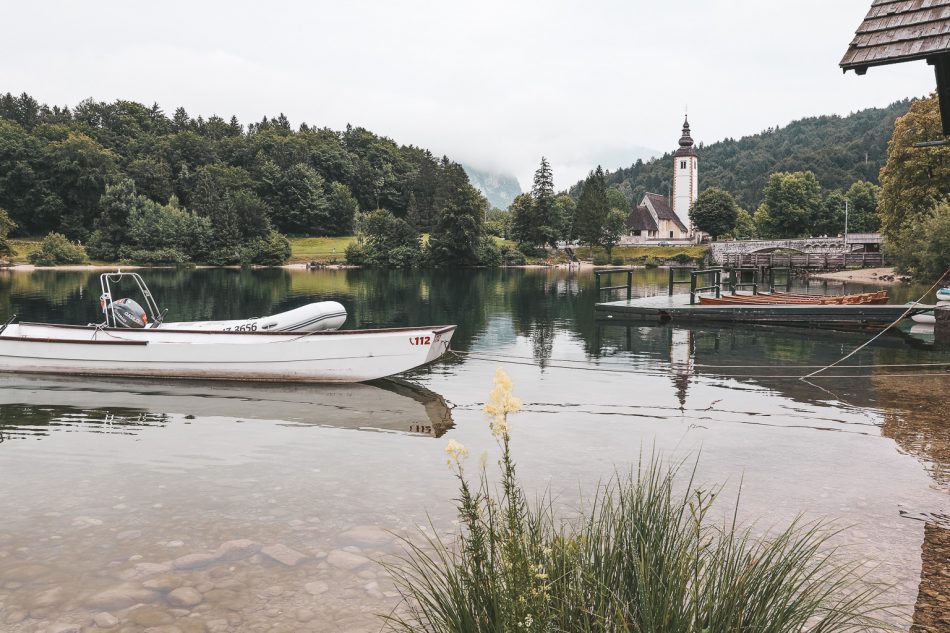 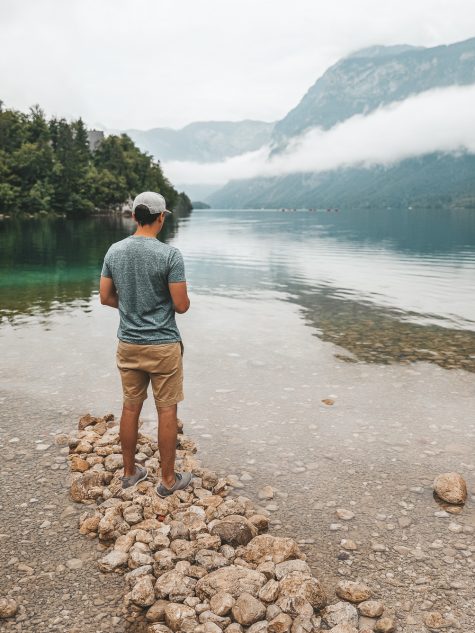 Ribcev Laz is the hamlet at the base of the lake, with a number of small sheep and goat-herding villages nearby. This would be a great area for hiking or biking on a warm summers day to take in the beautiful countryside. 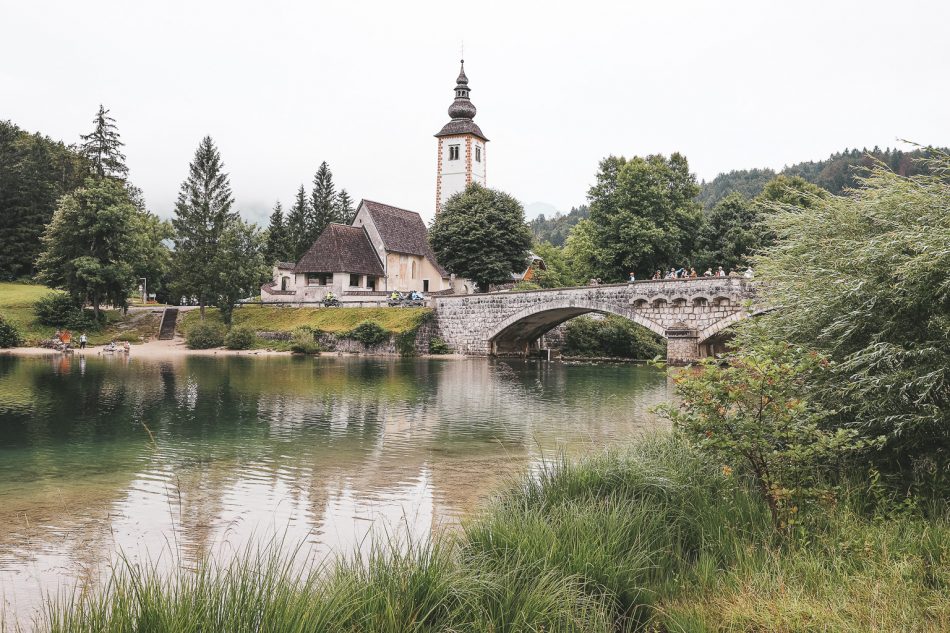