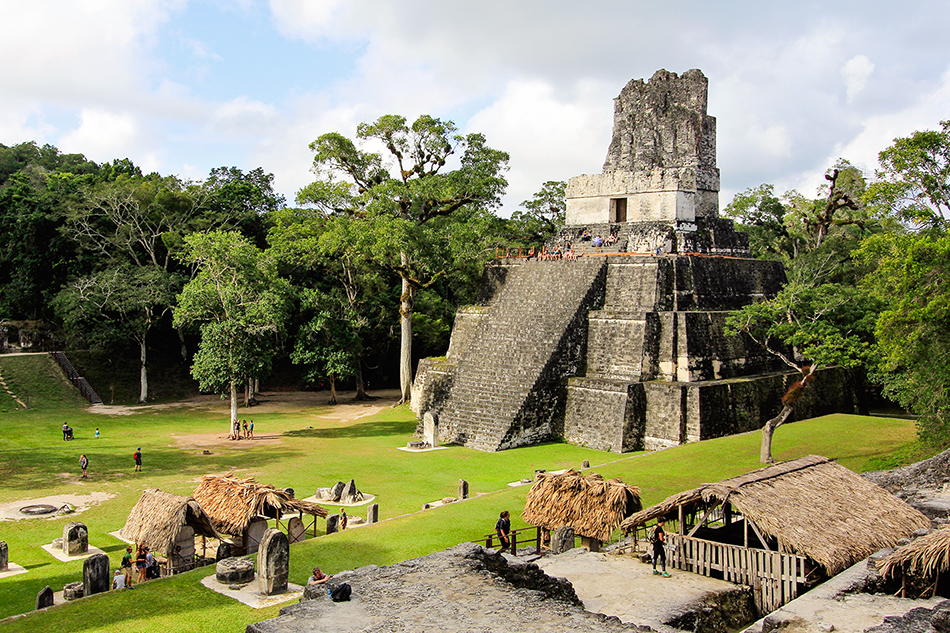 Another UNESCO world heritage site in Guatemala is Tikal, one of the largest and most important ancient Mayan cities.

These ruins are located in the northern part of Guatemala, close to the borders with Belize and Mexico. We had a few options to get there: take a 16 hour crammed bus ride or a 45 minute flight.

We chose the flight.

When we got off the plane we were hit with a blanket of warmth, and so much humidity it was almost suffocating. This is the tropical part of Guatemala, with Tikal located completely within the rainforest.

We stayed the night and left our hotel room at 3 AM the following morning to watch the sun rise over Tikal!

What’s the Deal with Tikal?

Tikal is an ancient Mayan city, and one of the largest in the world. The site is 16 square kilometres in size and contains more than 3000 buildings. The pyramid temples of the complex rise up into the sky, towering over the tree tops of the surrounding jungle. 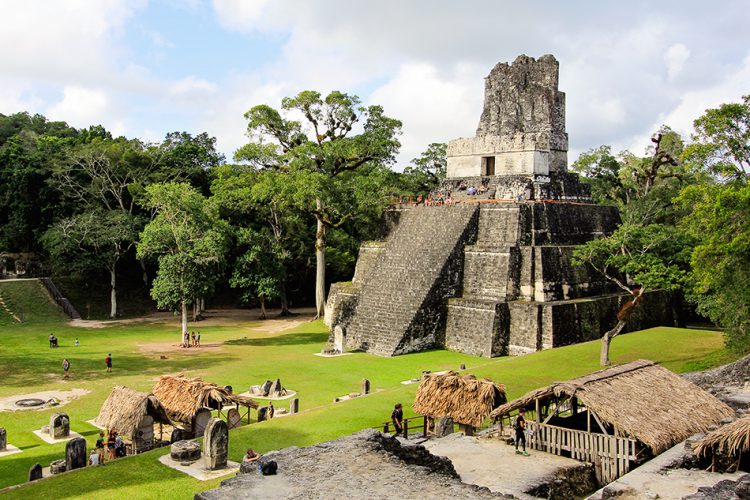 It is believed that the first inhabitants of Tikal occupied the city over 3000 years ago and lived there for about 100 years. The reason the city was abandoned is unknown, though believed to be due to drought due to lack of rain and poor growth of crops after deforestation. The people just kept cutting down the surrounding jungle to make way for their city, likely unaware of the consequences.

As a result of the drought,  the people of Tikal fleed to some of the newer and better known Mayan sites, such as Chichen Itza in Mexico. With the city abandoned, Tikal slowly became overgrown with trees and forest once again. 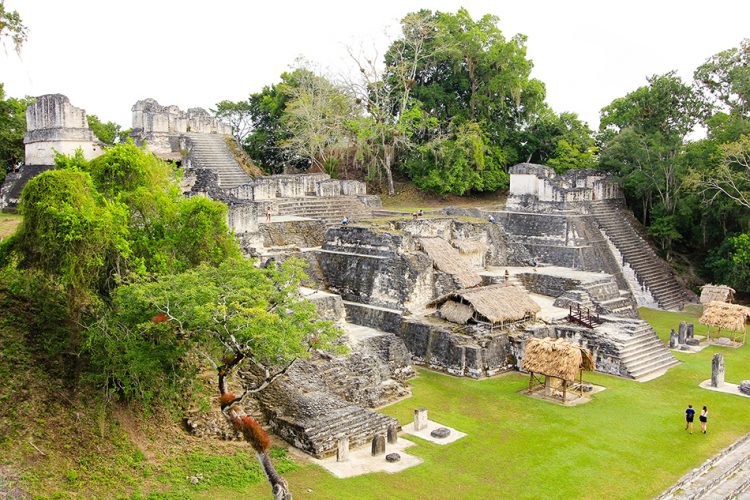 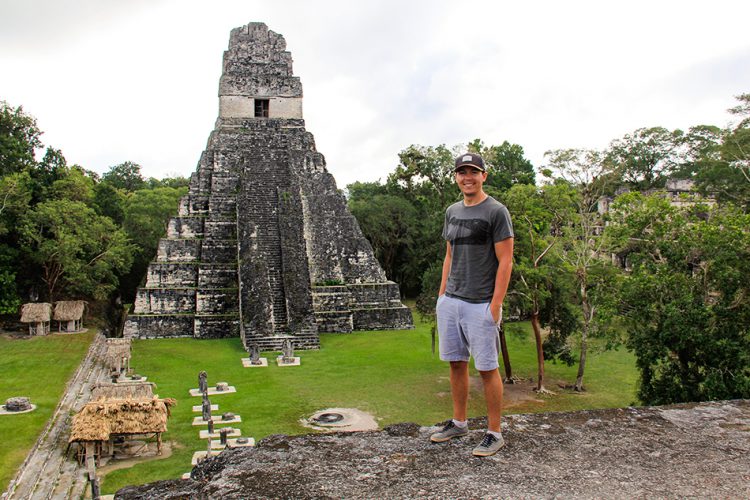 After centuries, Tikal was discovered  in 1848, and since it has since been slowly and laboriously unearthed. 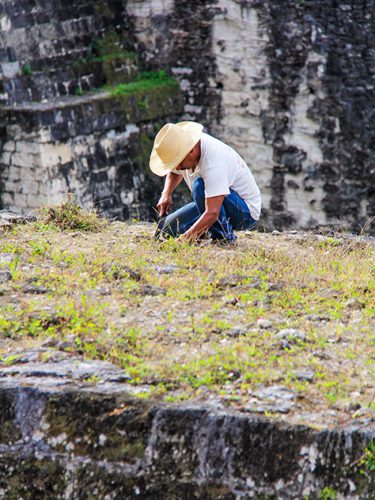 One of the most amazing parts of Tikal for us was seeing how such a massive site can be entirely hidden within the jungle. Tikal remains almost completely enshrouded by rainforest. While some of the major buildings and central plaza have been uncovered, the majority of it remains unseen.

Sometimes we would walk by what appeared to be a simple hill full of trees. But if we looked closely, features of a hidden temple would be spotted: a small limestone rock peeking out, or the tip of a temple just barely poking out at the apex of the hill. The previous Mayan or Incan sites we’ve seen have been completely restored and uncovered, so it was neat to see what nature can do.

It’s estimated that it will take at least another 10 years to complete excavating the site!

The Sounds of Dinosaurs

Getting to Tikal for sunrise meant arriving in the complete darkness. We trekked a couple kilometeres in the dark through the jungle (stumbling upon only one tarantula with our headlamp…), until we reached the tallest temple in the complex.

We climbed the 190+ steps to the stop, sat down and waited for the animals of the jungle to awaken.

This was one of the most unique things about our visit to Tikal, and one of the most memorable. Rarely do we close off all senses except for one – in this case, sound – and pay particular attention to only that. We listened for an hour as the sun rose, and heard the jungle come to life.

The most memorable sound was that of the Howler monkey. These monkeys roar to one another, and their loud, booming howl sounds like the shriek of a Tyrannosaurus Rex. It’s a noise you cannot miss, and sounds like something out of a movie.

The weather changes by the minute in the rainforest, and the last few days were known to be rainy and overcast. Today was no different, and we weren’t left with much of a view at sunrise apart from the tip of a single temple poking out from the canopy of the trees. We didn’t terribly mind, as the sounds were more than enough!

As mentioned, Tikal is located in the sub-tropical rainforest of Guatemala, and much of the forest is still there. This also means seeing many animals in their natural habitat. The jungle is a noisy and active place!

Apart from the howler monkeys, we also spent much of our day scouring the jungle treetops for spider monkeys jumping from branch to branch. They’d dangle by only their tail and eat the vegetation of the lower branches, and then swing easily with agility to the next tree. They often travel in packs, so it wasn’t unusual to spot one spider monkey and quickly find another one or two nearby.

We also eyed this fancy turkey, known as the Ocellated turkey, with its vibrant colors and iridescent feathers. These colorful creatures are only found in the Yucatan peninsula of Mexico and in parts of Belize and Guatemala.

After a morning of discovery – which wasn’t nearly enough time to visit all the sites – we headed back to the town of Flores, just outside of Tikal National Park. More on that tomorrow!

There are many ways to visit the Tikal site in Guatemala. Tours can be arranged from Mexico, Belize, or Guatemala. The site can be seen at many different times throughout the day and there is even the possiblity of camping in the ruins.

We chose to book the sunrise tour which leaves Flores at 03:00 AM, which we would highly recommend as we loved listening and watching the jungle come to life. Despite what you pay for the tour, you will still be required to pay an entrance fee to enter Tikal National Park, which will vary depending on the time of day you wish to enter. Sunrise is the most expensive time to visit, costing 250Q.

We booked our tour through Los Amigos hostel and paid 100Q for transportation and an English speaking guide. Our tour guide was great, but if given the choice we would likely not book through them again. We felt lost among a massive group (at least 20-30 people) and found we spent a lot of our time waiting. Instead, we would have preferred to book with just a single guide or in a much smaller group.