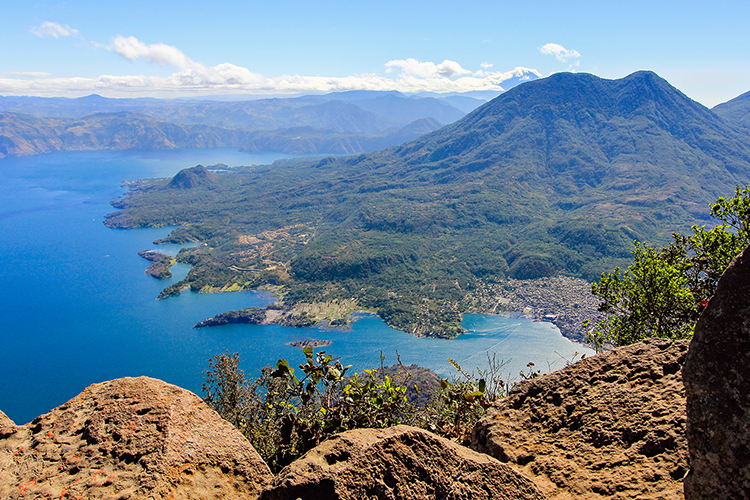 San Pedro is one of the larger towns on the lake, known as the backpacker mecca. Prices are low and hotels are aplenty, which draws many tourists to this town. While not the most authentic of experiences, this village has a lazy beach-town vibe about it, and we couldn’t help but be lured by the numerous lakeside restaurants and cafes to lounge in. 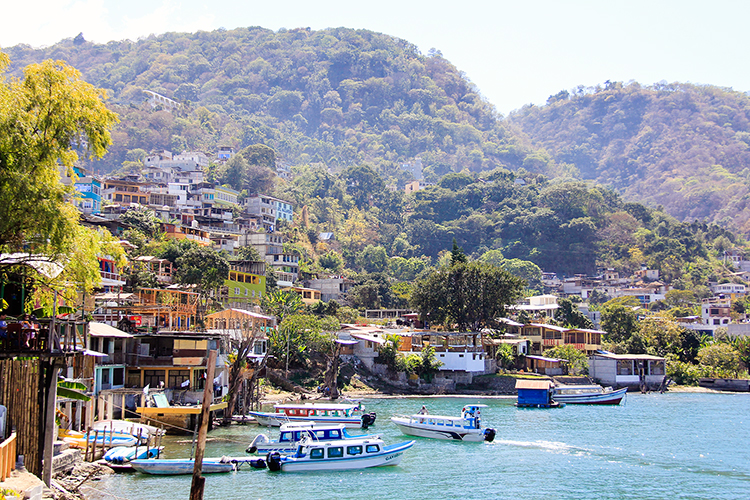 It seemed that every place we passed had an even nicer balcony than the last, which meant we spent much of our time hopping from one place to the next. Some of the balconies weren’t balconies at all, but openings that let you fall right into the lake if you so choose. 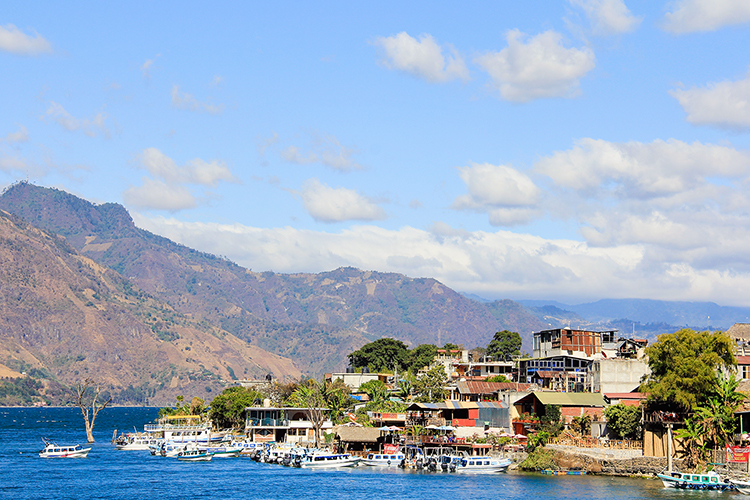 The town is not all gringos though. If you are willing to venture a short distance uphill you’ll find yourself transported into the local culture and colorful neighbourhood streets. Every afternoon a street market would magically appear, with locals selling homemade goods and homegrown vegetables, and then hours later it would dissolve as quickly as it came to life. 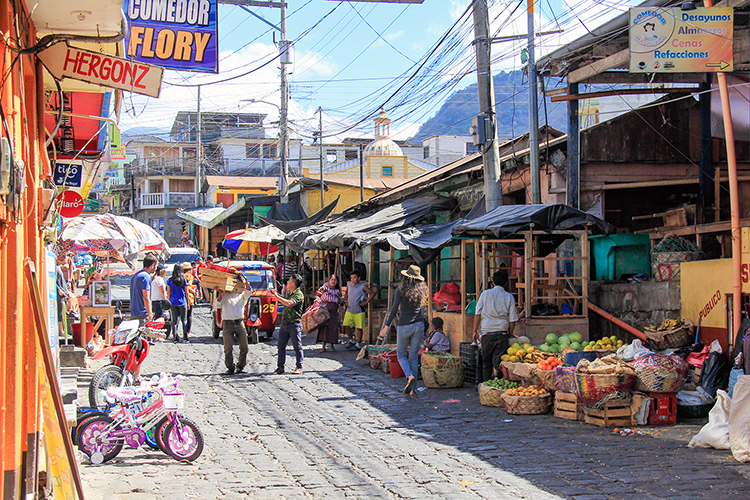 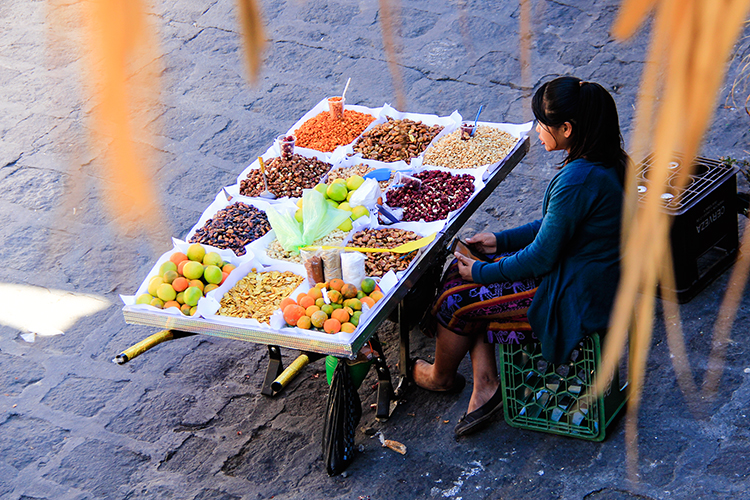 As all of these towns are built up into the hills, the roads are steep and many people use little red tuk tuks to get around. Though sometimes it seemed the two stroke engine in the tuk tuk would struggle to get up the hill just as much as any unfit person would; I swore sometimes they’d just stop and start rolling backwards down the hill. 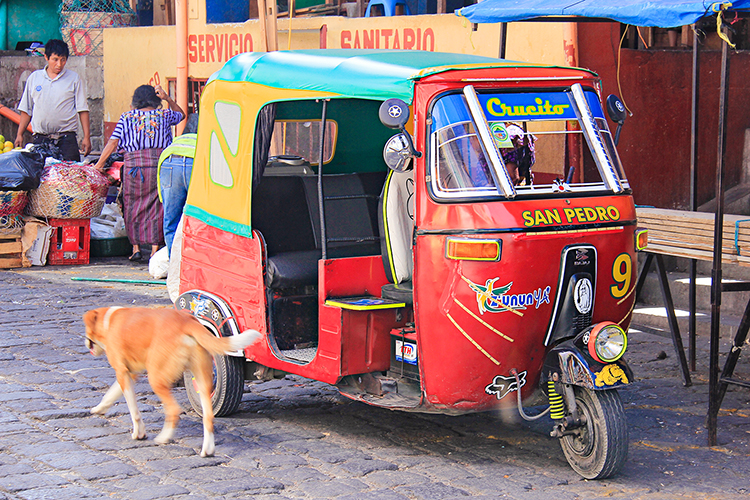 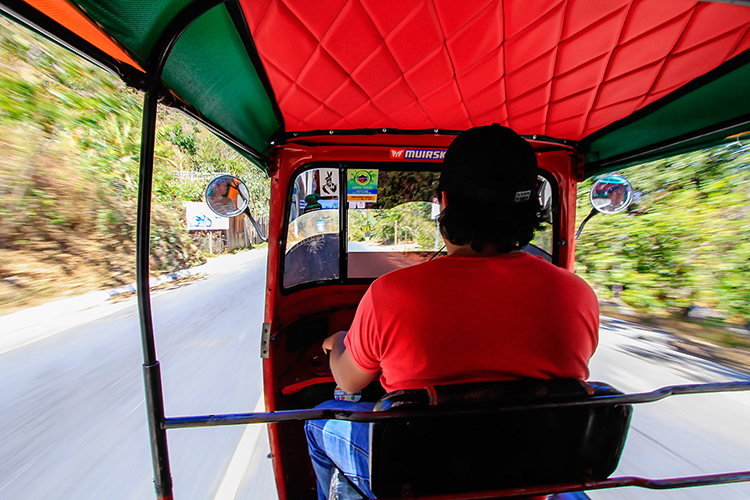 As you’ve probably already noticed, Lake Atitlan is all about the volcanoes, and looming over San Pedro is the San Pedro Volcano. We knew we wanted to climb it as soon as we saw it, and planned a hike early in the morning on our last day to avoid the heat. With a vertical of over 1200m we had flashbacks to Lone Cone.

The hike took us 2-3 hours, and took us through a variety of landscapes including coffee plantations and lush green forest. We even went through corn fields which, when dried, looked like something out of a halloween movie: 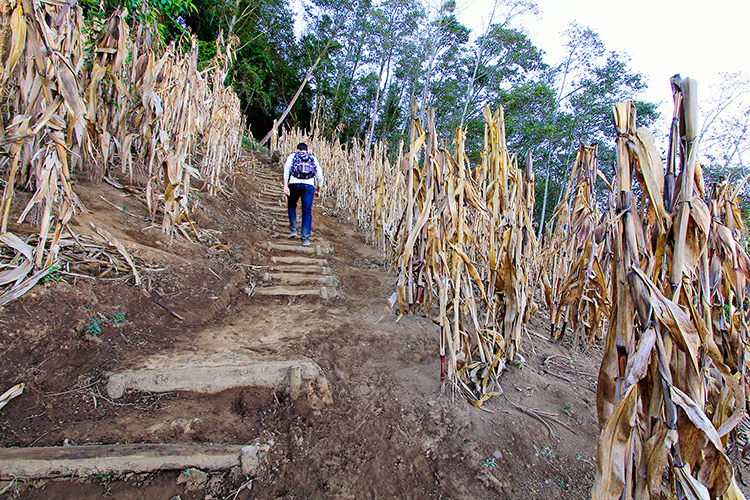 The hike even included an impromptu rope swing on the way up. If only every hike included one of these! I think we got distracted on this for so long that we added 30 minutes to our hiking time. Don’t worry though, I gave it a few solid tugs to make sure it was sturdy before we swung out over the edge. 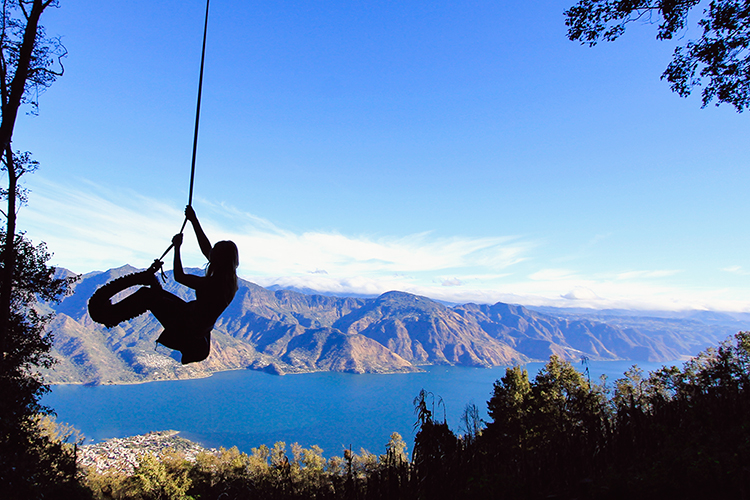 The views from the top were worth every bead of sweat, as we overlooked the entire lake, the town of San Pedro, and the other two volcanoes on the horizon. 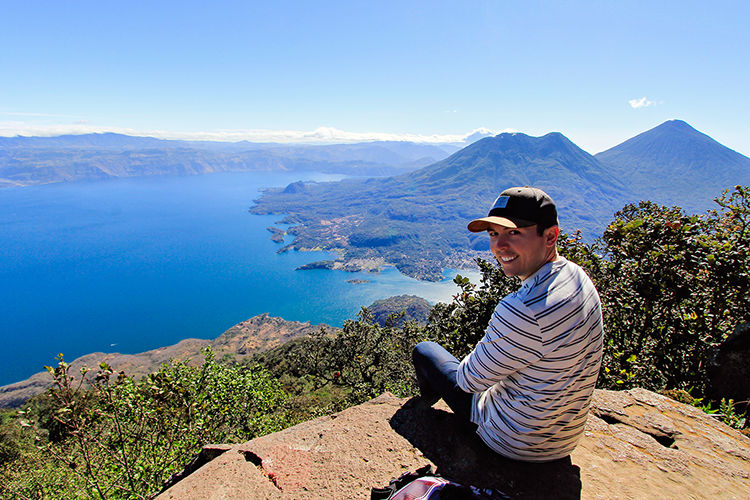 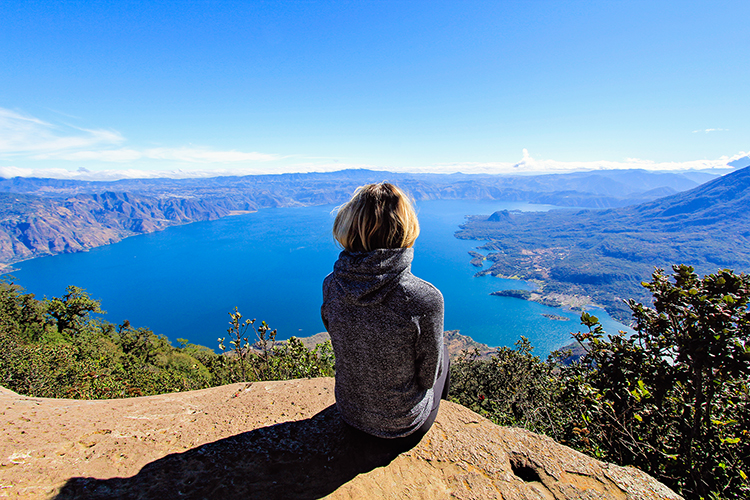 To pay for hotels here, we have been asked several times now to take a selfie instead of providing a signature. The hotel clerk hands over a phone with an official-looking banking app. When you look at it, your face is looking back at you and the app tells you to “Take a Selfie”. So you smile stupidly and hand the phone back, somehow having completed the transaction.

After completing our hike and being dusty from head to toe, we took our last taxi boat ride across the lake to our final destination: Santa Catalina Polopo. We stayed in one of the four hotels in this town, which had an amazing pool with probably the best view of the lake yet. 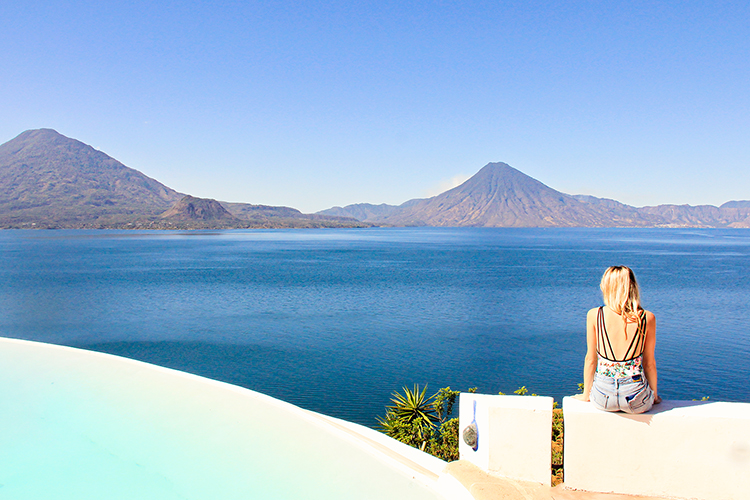 We spent our final night on the lake relaxing by the pool and taking in the views. The owner of this resort had a similar story to our first rental, being an architect from Italy who ended up in Guatemala as a young man when he thought he booked a Caribbean getaway for him and his wife. He ended up in Guatemala, disappointed by his mistake, but quickly fell in love with Lake Atitlan. 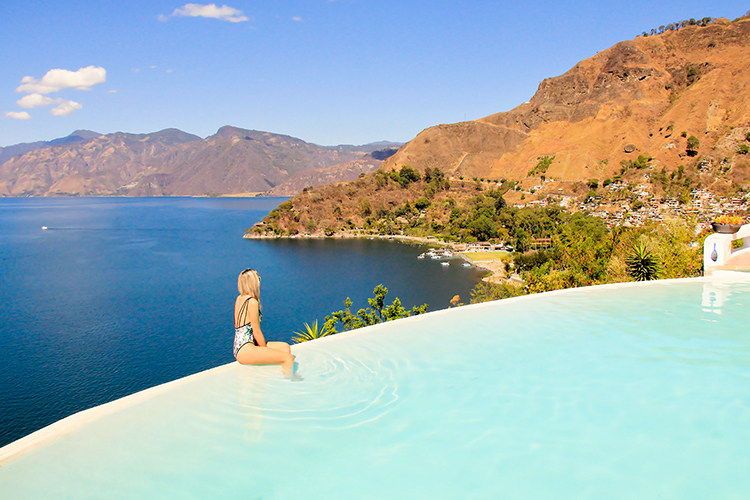 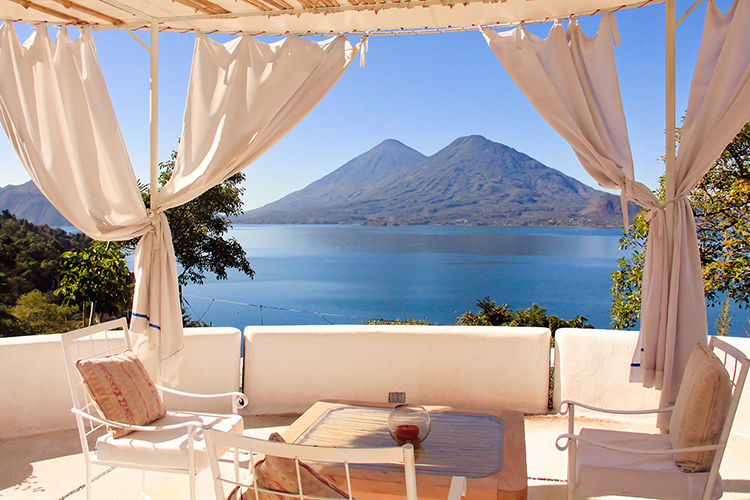 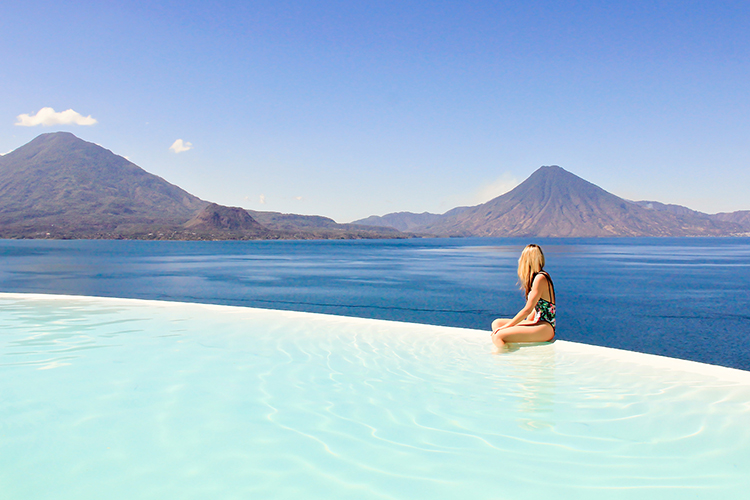 The owner is now in his 80s and owns the resort primarily for a place for his friends to come visit him. As we were rare strangers to show up at his front door, he spent much of the evening watching the sunset with us and regaling us with stories of his past. 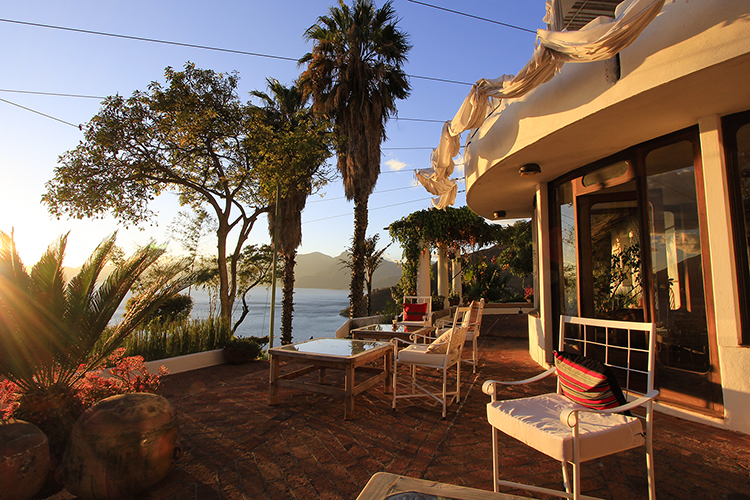 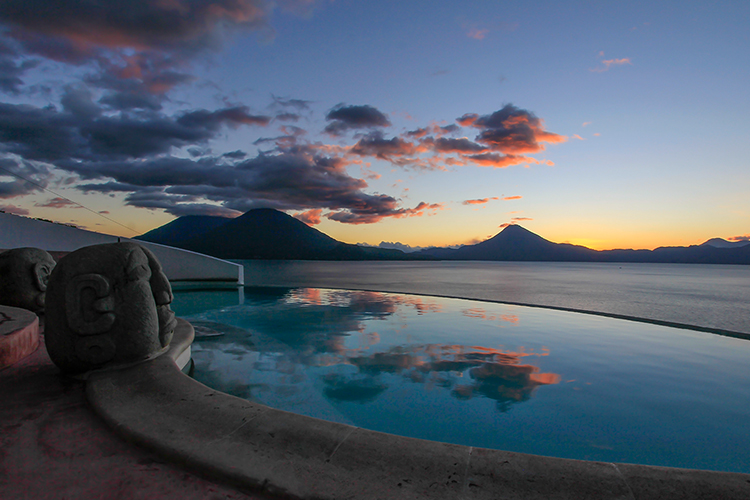 The San Pedro Volcano is a 2-4h hike that takes you through coffee and corn fields before lush vegetation and the viewpoint. It is located in the national park which has a fee of 100Q to enter. This entrance fee gives you a guide that starts you on the right path for the first 20 minutes. The rest of the hike is well signed and easy to follow.

We recommend doing the hike early in the day to avoid the heat and to get the best views of the lake, since the clouds usually obscure the view in the afternoon. There are tour companies that offer guided tours from San Pedro but this is unnecessary as the hike is safe and easy to follow.