Apart from our adventures down south in Patagonia, we couldn’t visit Chile without a stop in the Chilean wine region. Chile is known for producing Cabernet Sauvignon, Merlot, and its signature grape: Carménère.

Wine first came to Chile when the Spanish colonized the region. However, the industry didn’t really thrive until centuries later when a number of French families immigrated to the country. At this time, wine grapes in Europe were being destroyed by disease (phylloxera) and people were desperate to find new areas to grow their grapes.

Chile was one of these areas. Given that Chile is a long and skinny country, bordered on one side by the ocean and the other by the Andes mountains, it is very isolated. This prevents the spread of mildew and other diseases, keeping Chilean grapes safe and healthy. This naturally made Chile a promising spot for wine production. 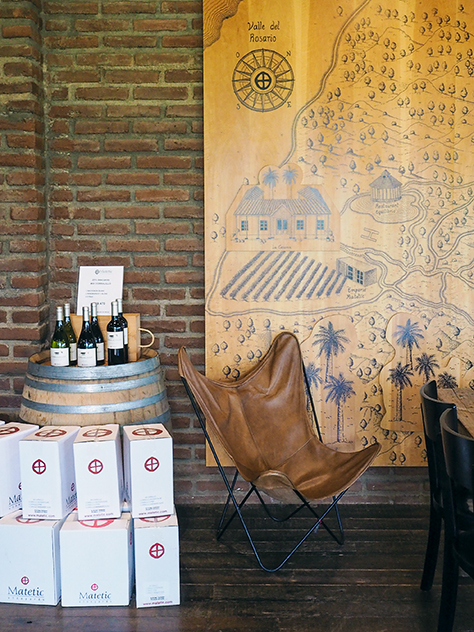 For centuries it seems as though the country struggled to produce quality wines. A combination of civil unrest, political instability, and a lack of local interest in wines resulted in the production of lacklustre wines. They were known to be “cheap but decent”.

In the last couple of decades this has all changed, mostly as a result of foreign investment. And now since the 1980s, Chilean wine is being exported around the world. 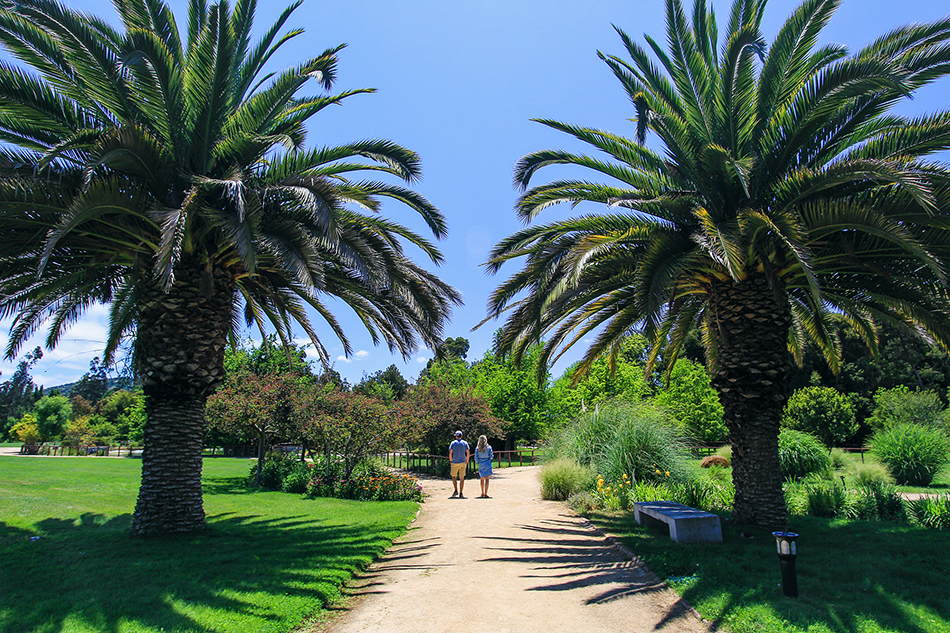 There are a number of wine regions around Chile’s capital city of Santiago, including Maipu, Colchagua, and Aconcagua valleys. We chose to visit one of the closest: Casablanca Valley.

Casablanca Valley is relatively new to wine production and is known for producing crisp whites and heavy reds. It has been often compared to California’s Napa Valley.

Carménère (meaning “crimson“) was initially a French grape produced in Bordeaux. For a long time this grape was part of every great Bourdeaux blend of wine.

However, the grape was very difficult to work with as it was susceptible to mold and mildew. An epidemic of an aphid-like bug called phylloxera wiped out the majority of Carménère from France, and it was never replanted. The French chose to go with more resilient grapes instead.

When the French moved to Chile they brought Carménère plants with them. Soon many Chilean wineries adopted this grape. With Chile’s isolation, the Carménère plant thrived. And today, Chile remains one of the primary and only producers of Carménère wine.

We honestly barely touched Chile’s wine region. With a one day tour in Casablanca, we visited three wineries, a tiny sample of what Chile has to offer. However, we had a few unique stops.

One of the most interesting stops was at Emiliana, the world’s largest organic and biodynamic vineyard. 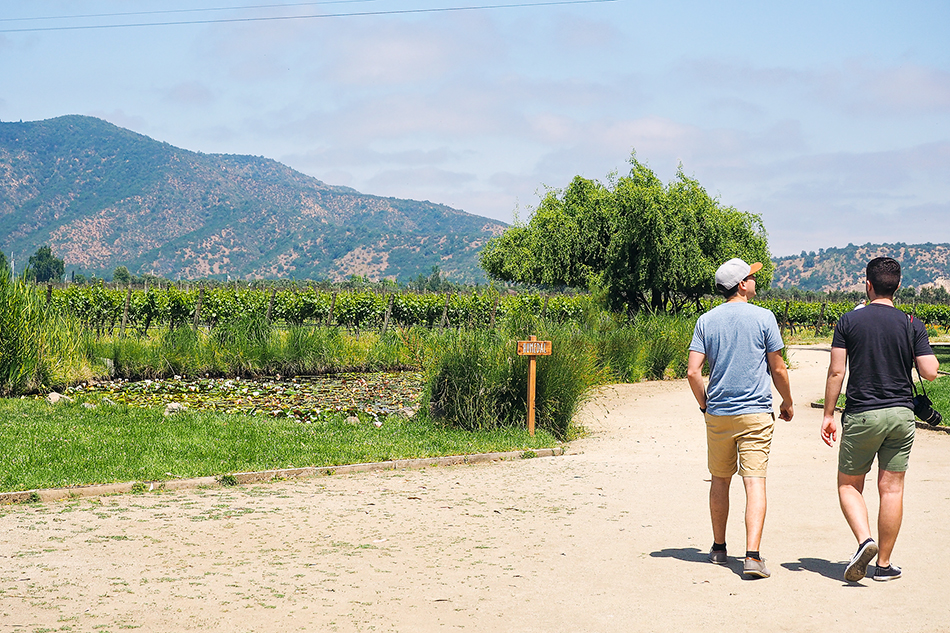 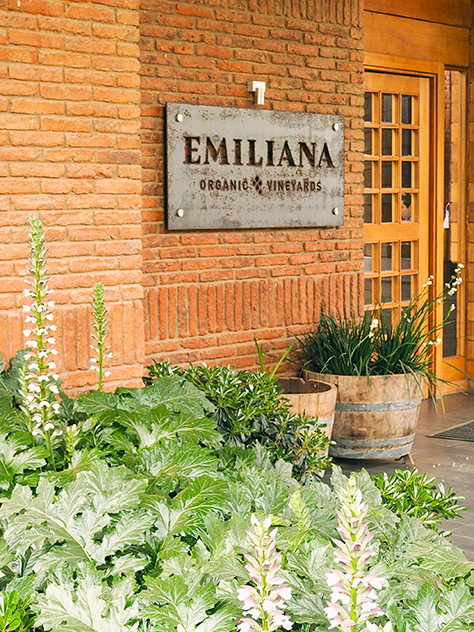 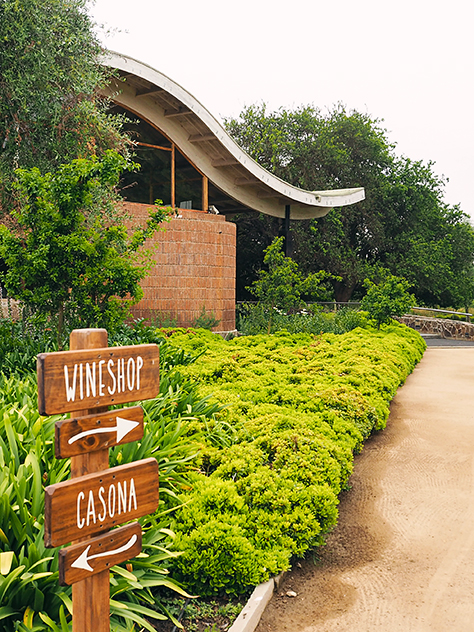 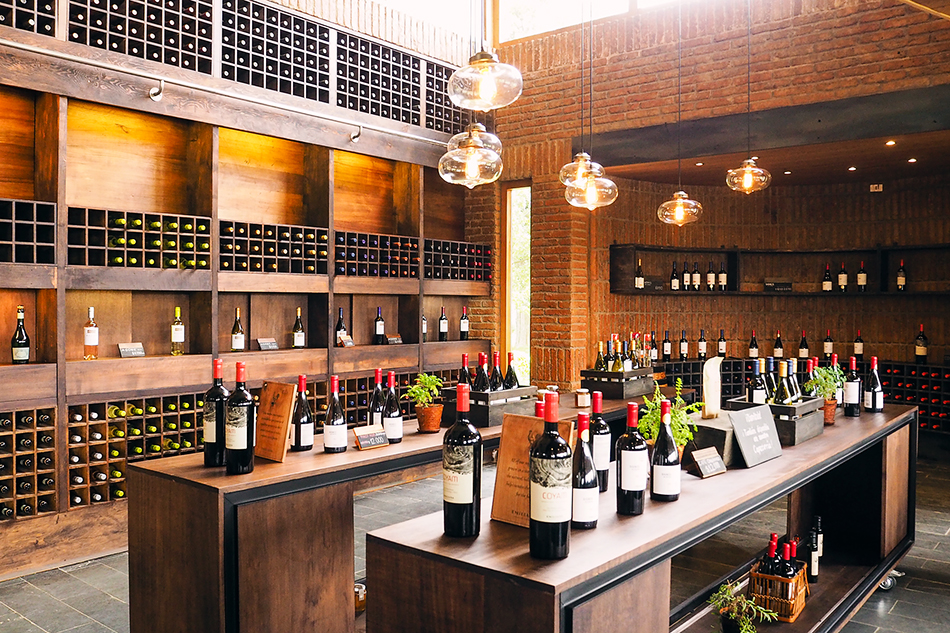 What is the difference between organic and biodynamic wine? “Organic” wine means the grapes are organically grown, without the use of pesticides or additives. “Biodynamic” takes this a step further, treating the vineyard as an ecosystem. The winemaker avoids manipulating the landscape (such as adjusting acidity or yeast), uses organic farming methods (using compost as fertilizer), and even takes into account astrology and lunar cycles. The end result is a self-sustaining vineyard with little external input.

It was interesting to learn about the process of creating biodynamic and organic wine at Emiliana. Among the vines are numerous other flowering plants and trees, whose purpose is to attract pests away from the vines. Wildlife is aplenty, and when pesty bugs are getting out of control, a coop of chickens is unleashed from their mobile pen to take care of the problem. Resident llamas protect the chickens, munch on the intrusive weeds, and provide natural fertilizer.

One of our other interesting stops was at the Bodegas RE winery, the first ever winery in the Casablanca region. For one, we learned that the eccentric winemaker combines various grape varietals to create unique flavors with distinct names: “Pinotel” (Pinot Noir and Moscatel), “Chardonnoire” (Chardonnay and Pinot Noir), and “Cabergnan” (Cabernet Sauvignon and Carignon).

Apart from his creativity, the winemaker at Bodegas RE also prides himself on thinking outside of the box and reinventing traditional methods. Bodegas RE is one of the few wineries in the world to use clay pots to ferment wine – a method used by ancient Greeks and Romans. In the true hipster spirit, old things have become cool again. 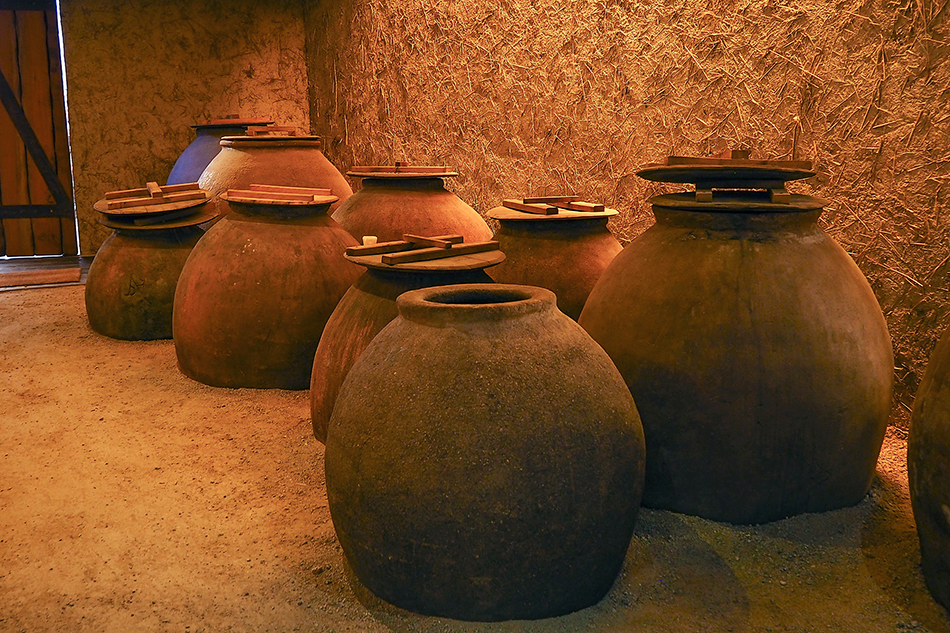 The original clay pots are seen above, small and partially dug into the ground to keep the temperature cool. The up-to-date version is seen below, big pots that hold 13 000 litres of wine. These are used instead of wine barrels to ferment and age the grapes.

The benefit of using clay pots is that this allows a more natural process with little intervention. In modern wine making, the wine is tested regularly, the temperature tweaked, and substances added as needed. In the clay pot method, you put the grapes in and hope you get something wonderful out at the end. The argument is that there is little intervention in the natural fermentation process.

Burying the pots underground lets the wine sit at Earth’s relatively stable ground temperature. The porous nature of clay allows oxygen to get into the wine, aging it faster. This means the winemaker can make a lot more wine in a shorter period of time.

We learned all this in a matter of one short day trip. Imagine how much more there is to learn about Chilean wines?! Next time…

There are many wine tours available from Santiago to the various wine regions surrounding it. They are available to book in advance or last minute from various tour organizers in town. We chose to go with a private driver: Christian “the van man”. We found him to be very knowledgable and he gave us great recommendations on which wineries to visit and which wines to focus on at each destination. Contact us if you would like his information.