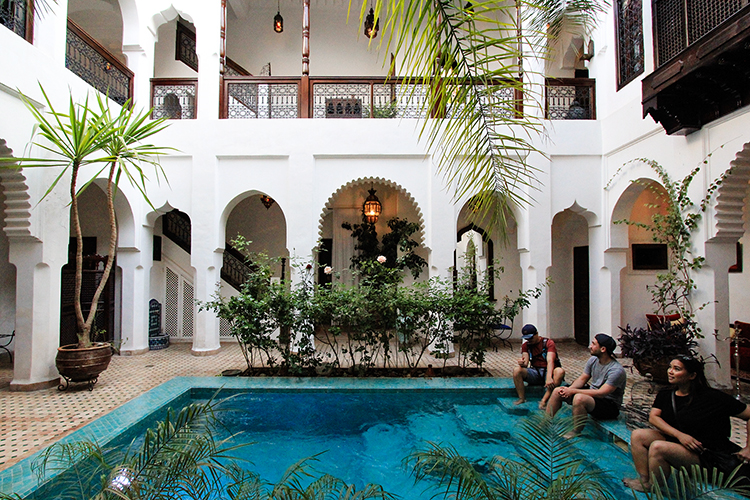 Our introduction to the African country of Morocco started in the vibrant city of Marrakesh. The city is known for its ancient medina: a winding maze of souks, artisan shops, shrines and riads, all contained within red dyed walls of stone. Just outside of the medina is the modern world of Ville Nouvelle, built by the French with trendy cafes, boutiques and gardens.

The equivalent of Europe’s old towns are Morocco’s medinas. Medinas are fortified ancient town centres, traditionally with many narrow winding alleys you can get easily lost in. The streets are packed full of street vendors and markets, and often feel only wide enough for pedestrians and motorcycles. 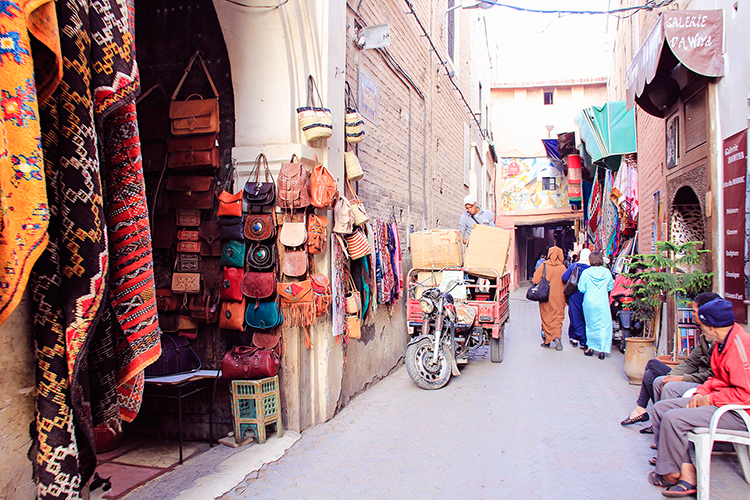 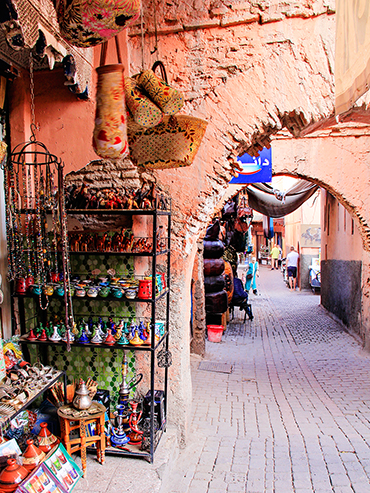 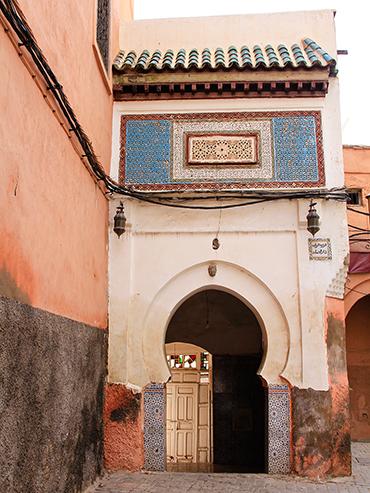 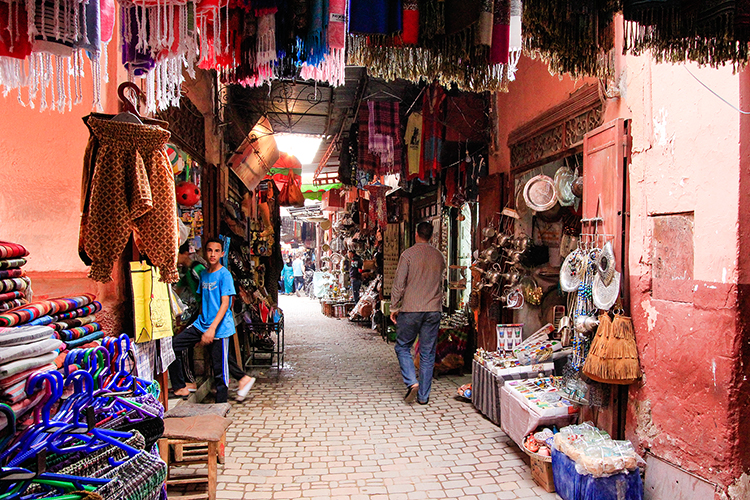 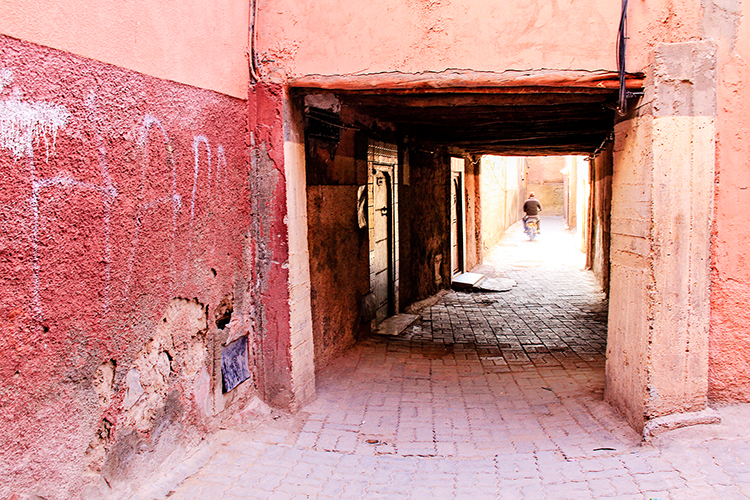 We stayed within Marrakesh’s medina and spent days wandering around the markets, feeling like we stepped back in time. Popular products include leather goods (specifically camel leather), rugs/carpets, spices, and cosmetic argan oil. I won’t lie and say we didn’t get drawn in to buy an item or two.

You have to haggle hard here, often starting at 50-60% below asking price. If you don’t, or if you ignore the calls from the shopkeepers on the streets, you should be prepare to be insulted. One of our favorites, to Andrew, was: 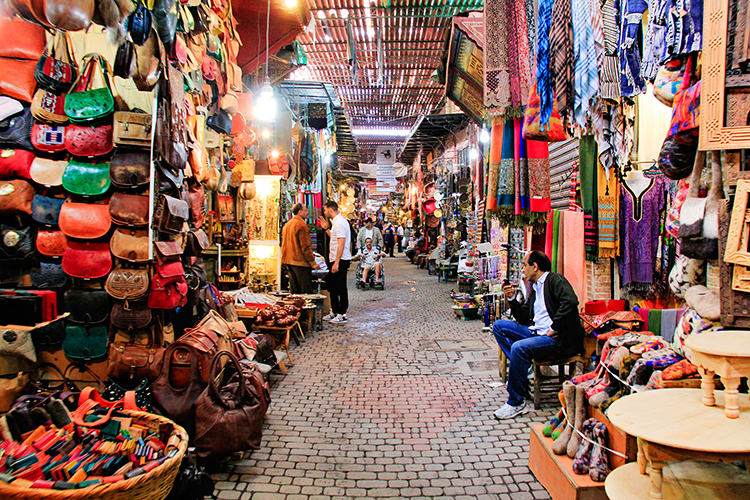 At the center of the medina is the largest town square in Africa, Jemaa el Fna. No matter where you stand in the square, you can never quite see the other end. You will find everything here from snake charmers, to wagon stands selling fresh orange juice (a type of delicacy here in Morocco!), to touts forcefully selling their goods. 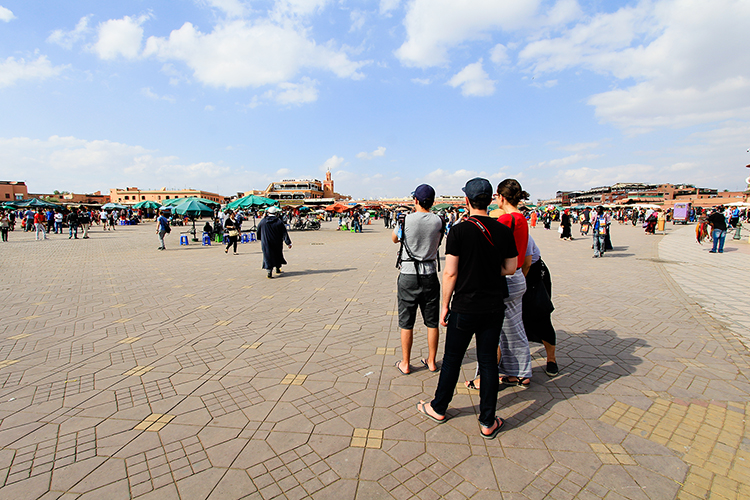 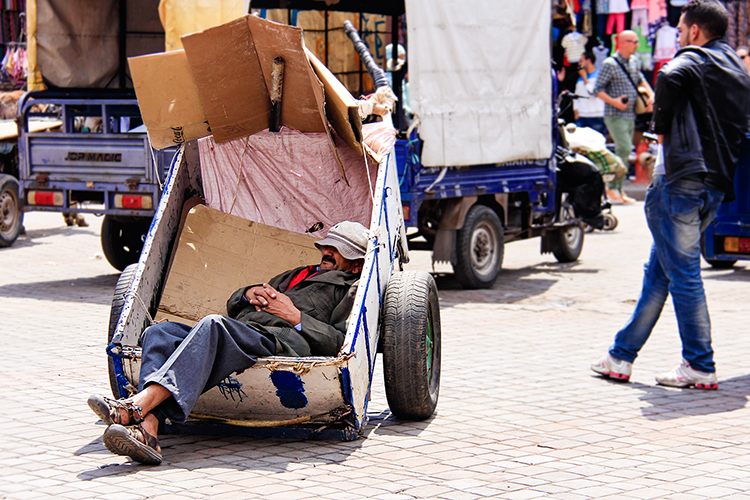 You know when you’ve left the medina when you hit one of these ancient old town walls, which outline the entire perimeter of the medina: 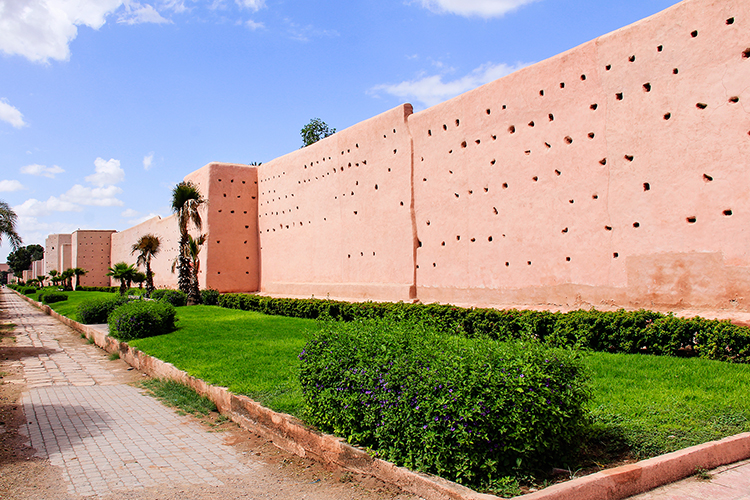 A riad represents a traditional Moroccan home with an interior courtyard. It is often multiple stories tall, with all windows opening into the inner courtyard. The courtyard itself usually consists of a pool or fountain surrounded by orange or lemon trees. 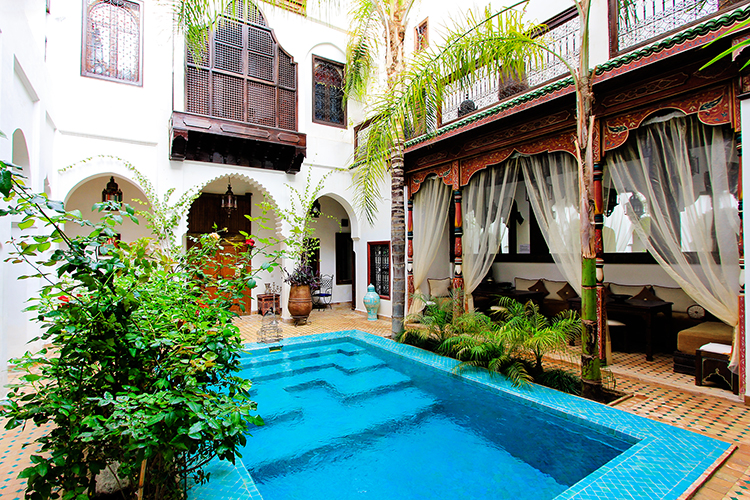 In older times riads were homes for the wealthy. Recently, many have been restored to their former glory and function as homes or guesthouses to welcome visitors throughout Morocco.

Riads are incredibly peaceful (intended to reflect the privacy of Islamic culture), and are the perfect refuge after a day out in the chaos of the medina.

There are many examples of traditional Moroccan colors and architecture all around Marrakesh. This is part of the fun of exploring the city. As non-Muslim visitors to the country, we are generally not allowed to enter the mosques, but there are plenty of other colorful and historical sites to visit.

Ben Youssef Madrasa is one of these, the largest Islamic college in all of Morocco. 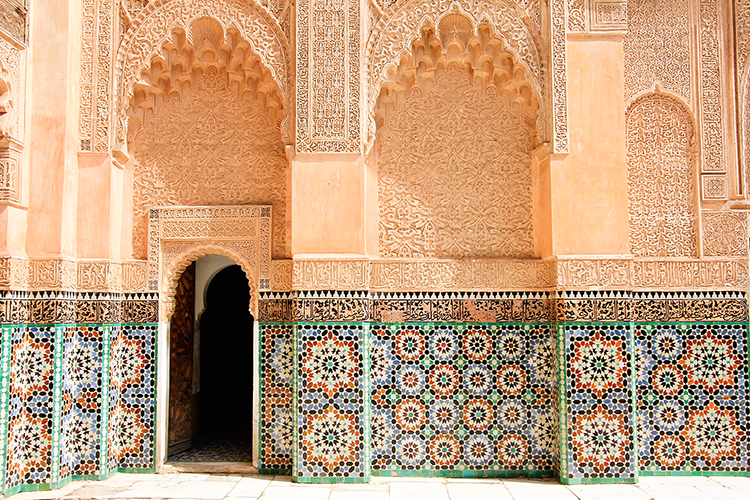 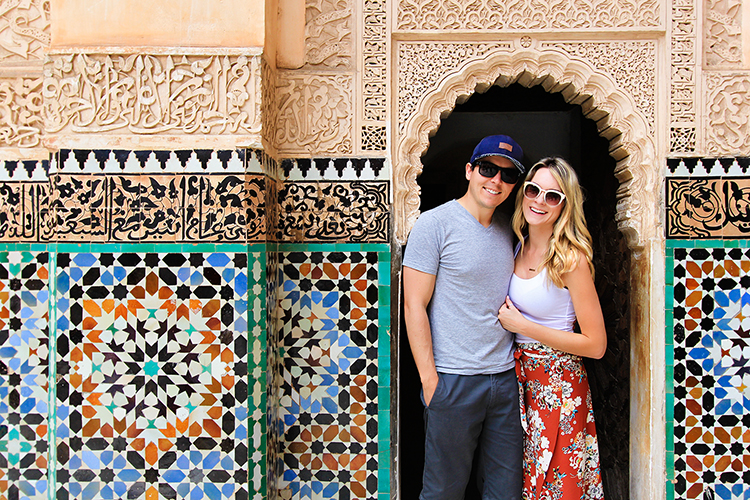 Though no longer functioning today, the school remains a beautiful work of architecture: 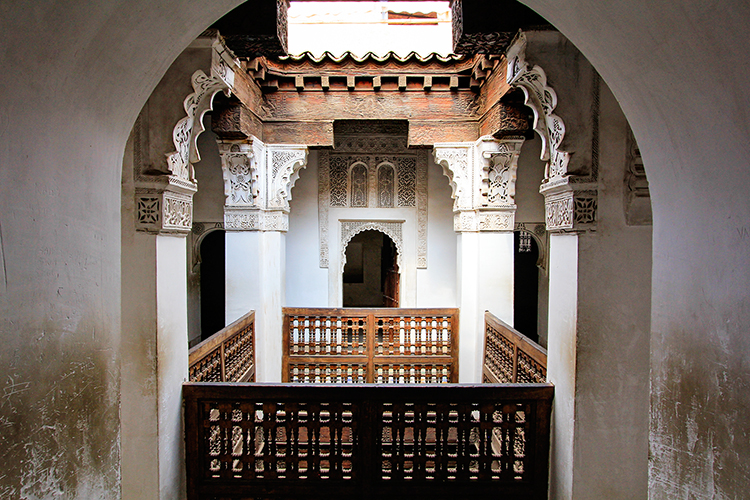 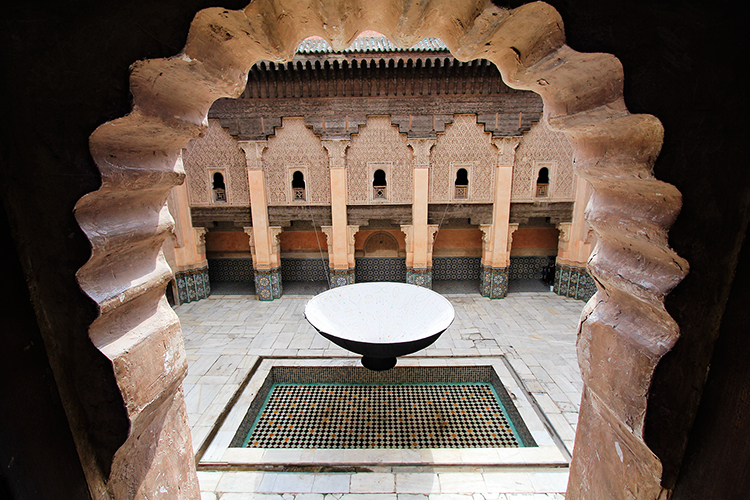 Additionally, there are two palaces in the medina of Marrakesh. The first being Palais Bahia, another work of traditional Islamic and Moroccan architecture: 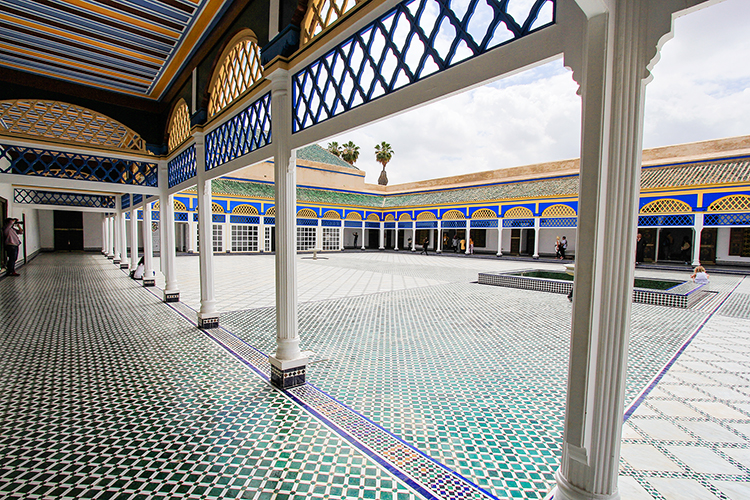 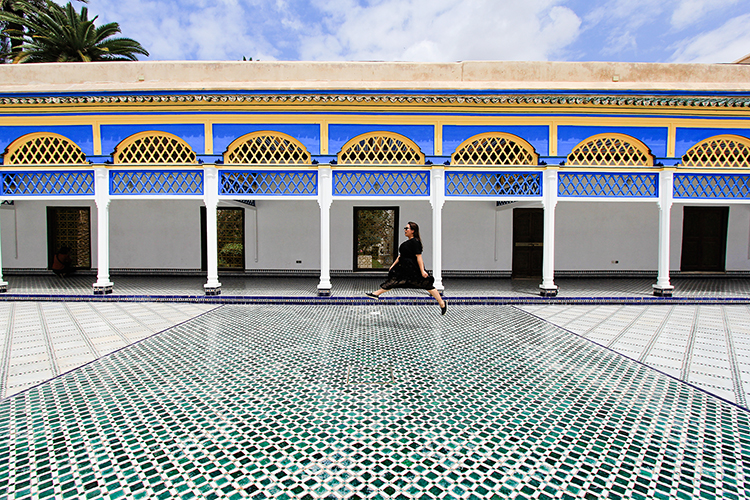 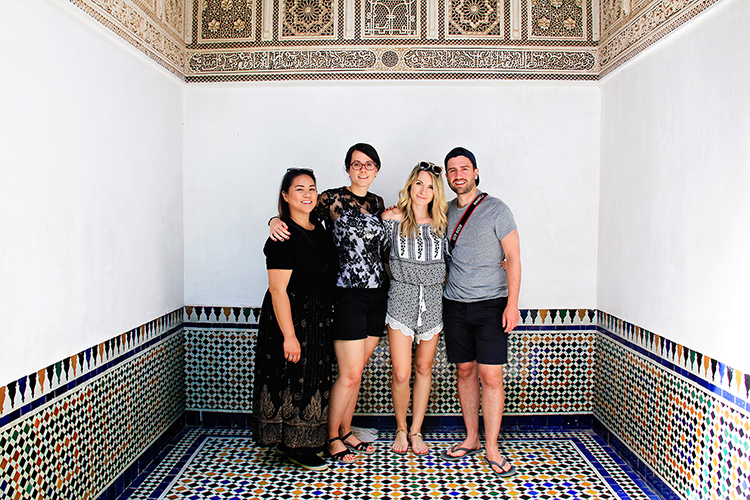 The other is Palais El-Badi, a palace which, 75 years after it was built, was looted and left for ruin – which is mostly what it consists of now. 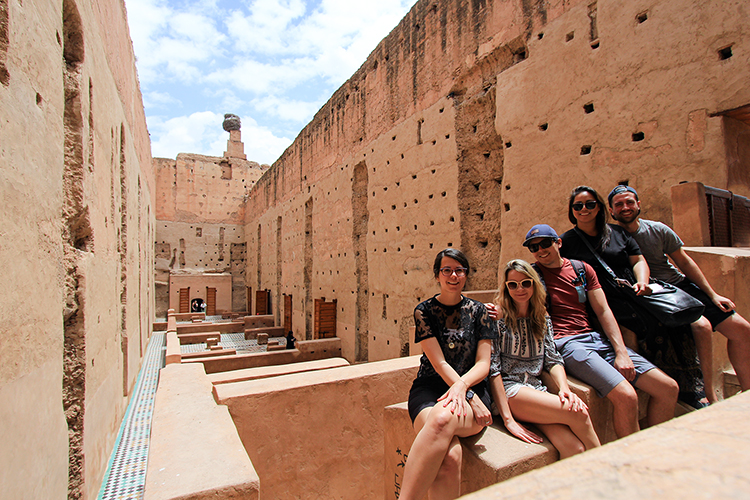 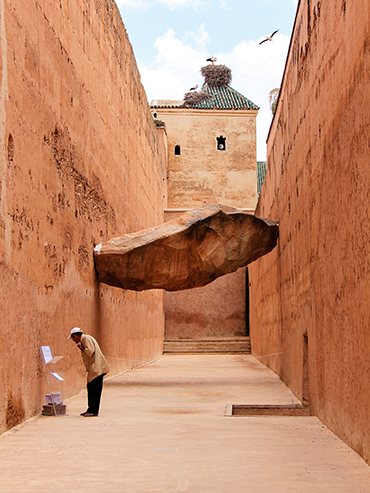 As mentioned above, Nouvelle Ville is the modern and trendy part of Morocco which was built by the French. The perfect representation of this are the Jardin Majorelle. These gardens were designed and owned by fashion designer Yves St Laurent, and have resulted in a modern garden full of electric-blue colors and cacti from around the world. 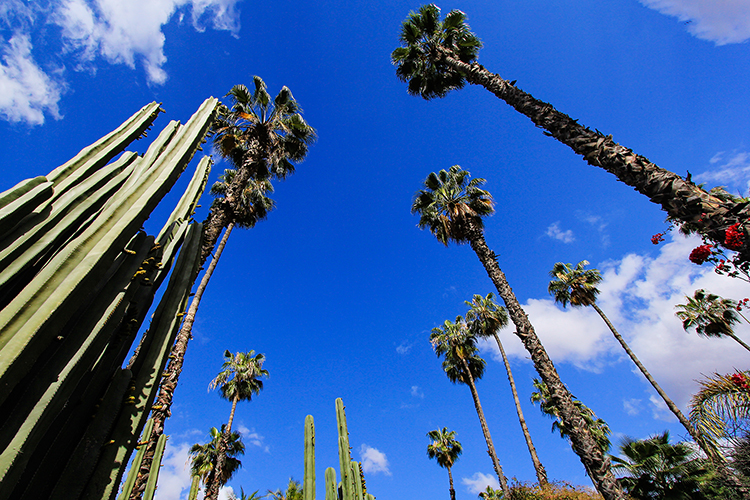 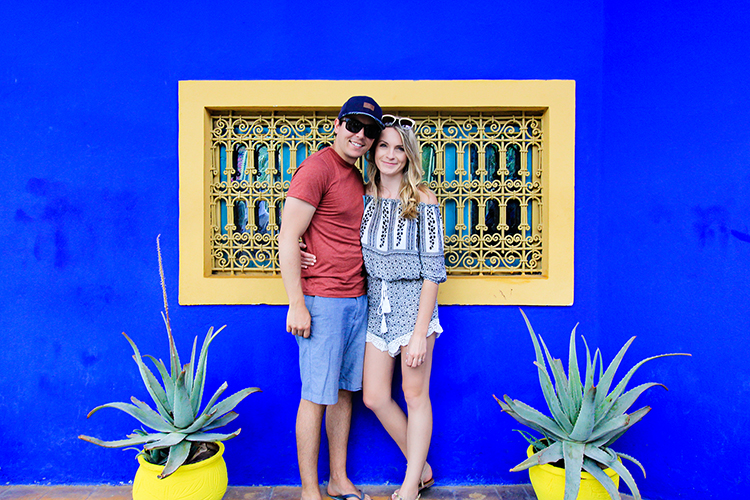 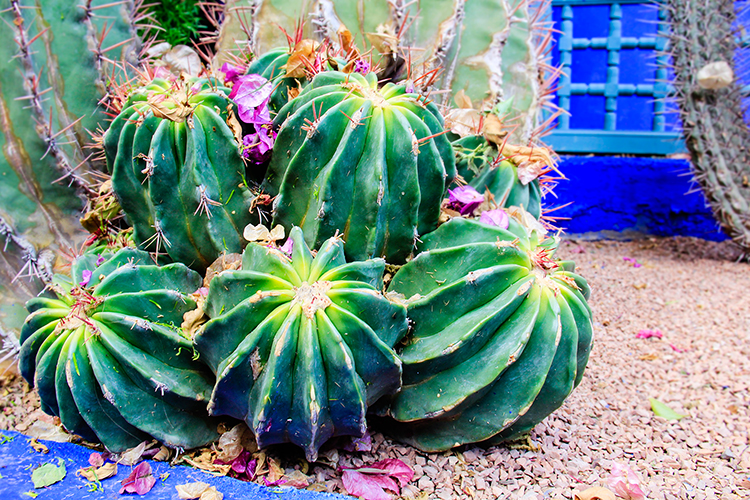 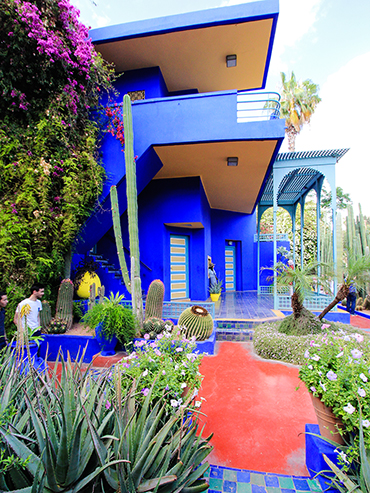 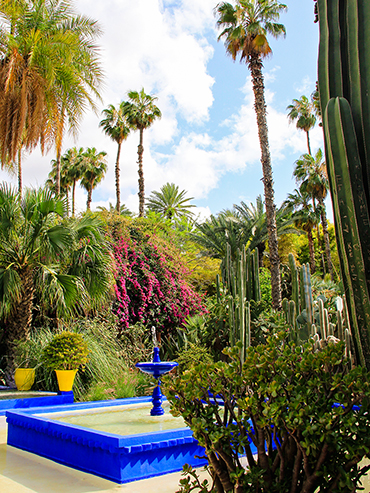 Next up we pick up our car rental and hit the road to explore Morocco! 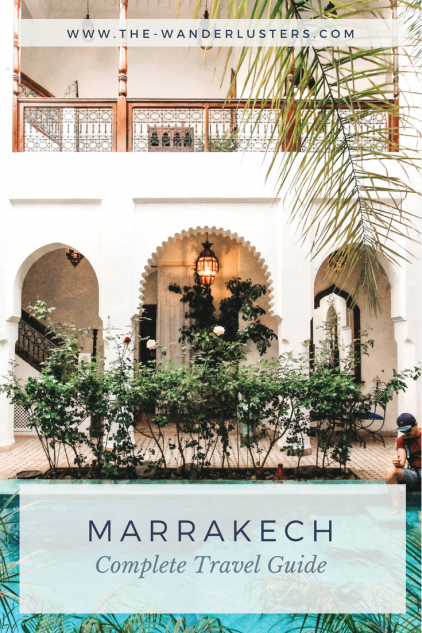