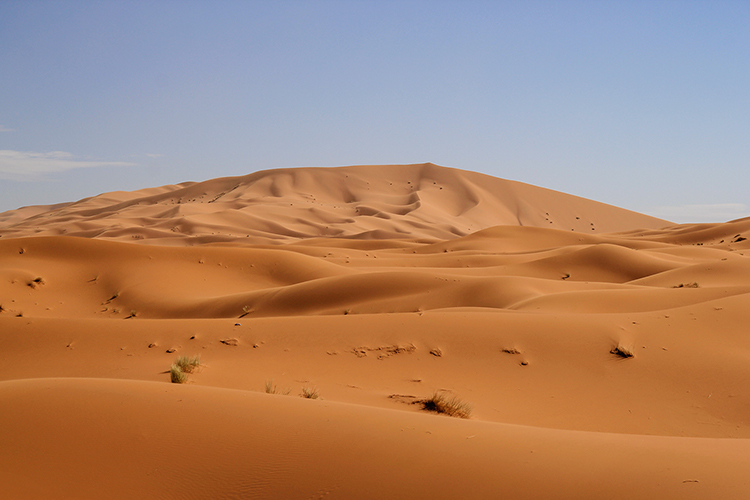 After leaving the mountains, we entered the Moroccan portion of the Sahara desert – the third largest desert in the world.

The rugged mountains slowly turned into soft dunes of sand, with streaks of sand blowing across the road with every gust of wind (reminding us of the snow drifts we’re used to seeing in Canada). 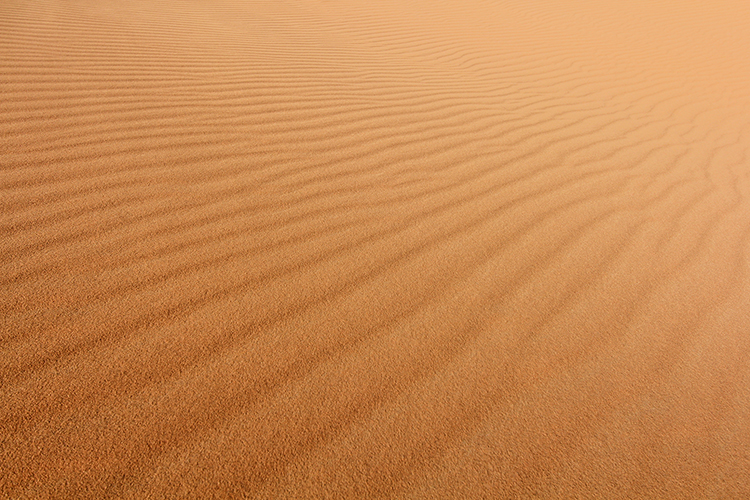 The towns, built out of mud and straw as we mentioned previously, were difficult to make out on the horizon – blending in well with their surroundings. Few inhabit this area due to the harsh living conditions. 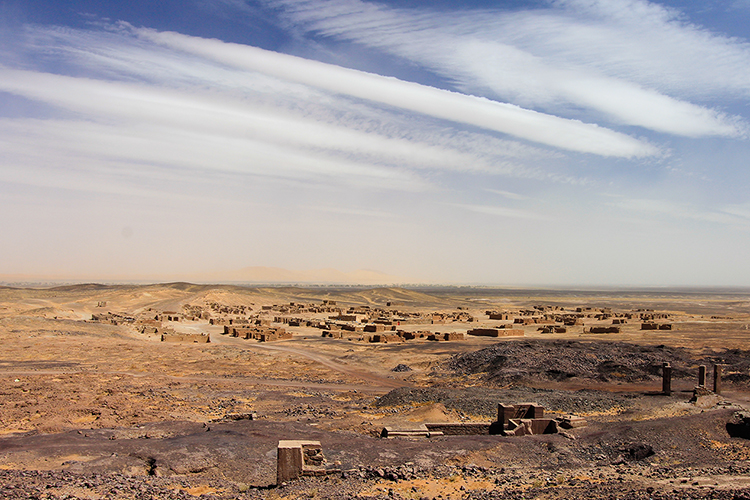 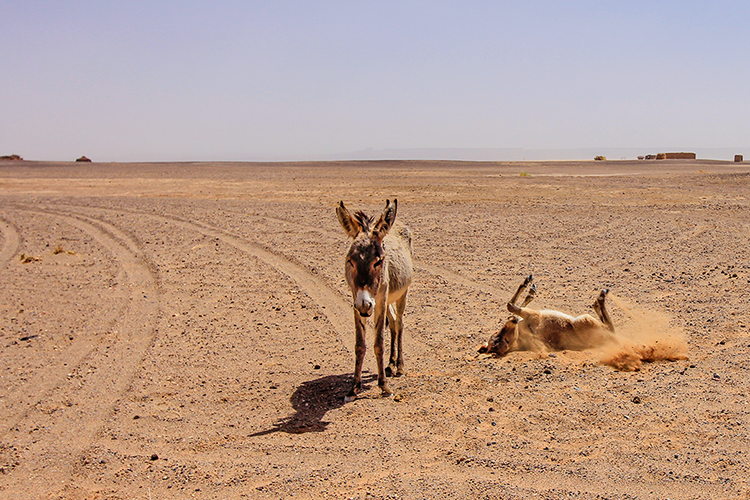 We settled in the tiny village of Hassilabied, just outside of Merzouga, as a base for our upcoming trek into the dunes.

The Saharan desert covers the majority of North Africa, spreading over a huge area of 9.4 million square kilometers.

Perhaps I was the only one naive enough to imagine the Sahara as a neverending area of sandy dunes. However, the majority of the desert is instead composed of barren rocky plateaus and gravel plains. Sandy dunes (“ergs“) actually only make up a small proportion. 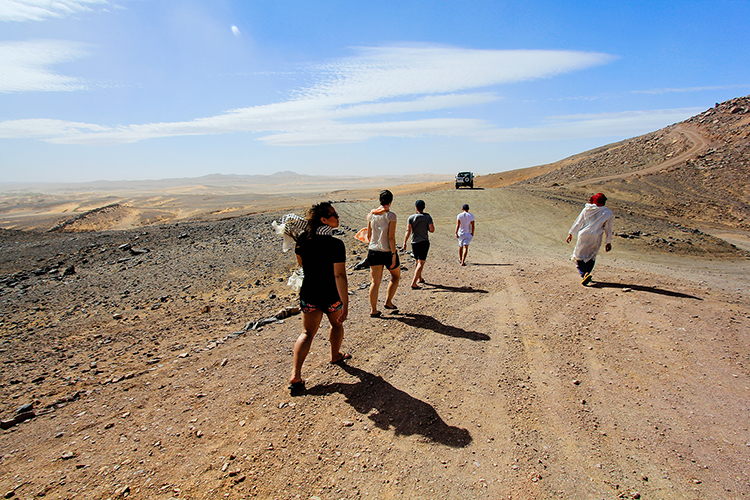 This became quickly evident to us, as the majority of our time in the desert was spent on gravel plains. The people here term this the “black desert”. 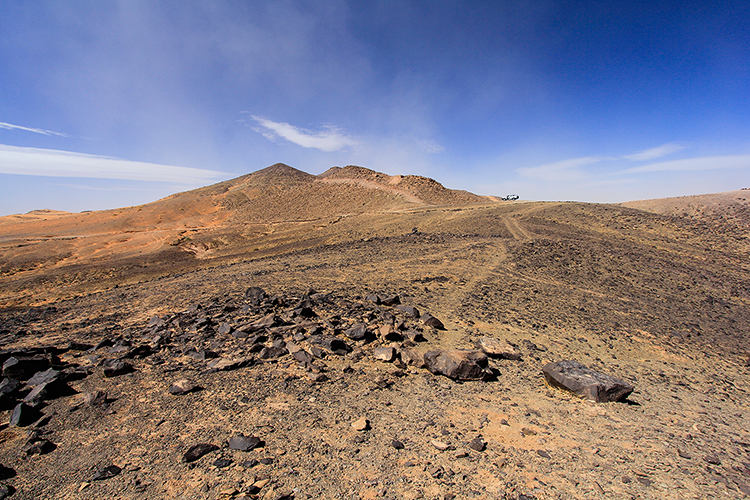 “Ergs” are large areas of sand dunes, or “sand seas”. This sand is mobile, moving with the wind and ever changing. The Sahara consists of multiple ergs; we visited one of two ergs in Morocco – the Erg Chebbi. 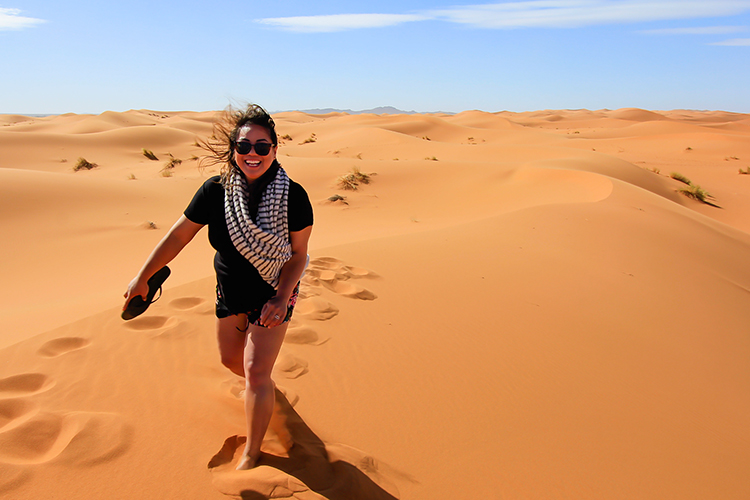 Apparently for the majority of the year the sand dunes are completely still, with no wind. As summer approaches, the winds of change begin. The locals here see this is a blessing, as the winds are seen as a way to clean the dunes and start anew. For us it meant quite the opposite – gusts of wind would blow sand into our faces and pelt against our bare legs. We came quickly to understand why the people here dress as they do… 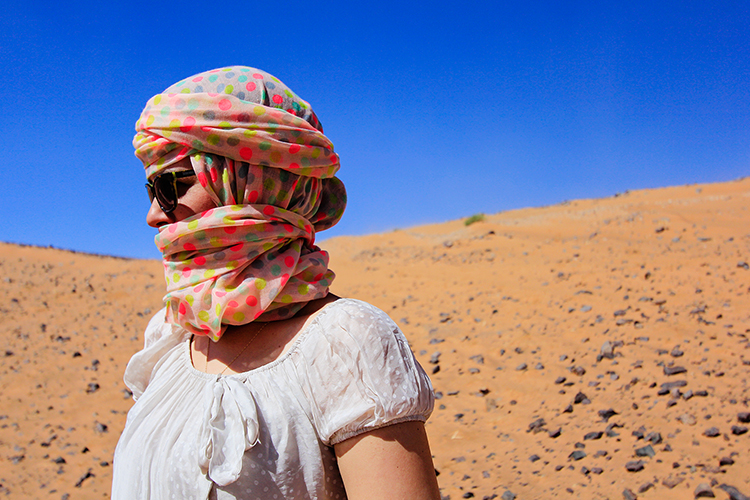 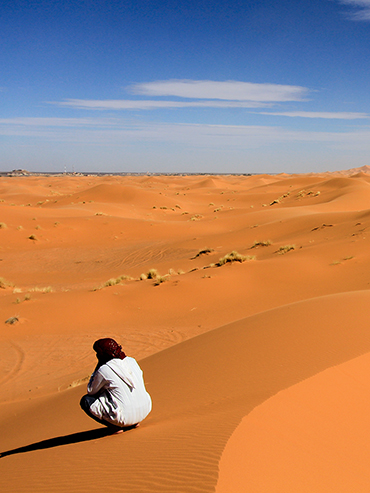 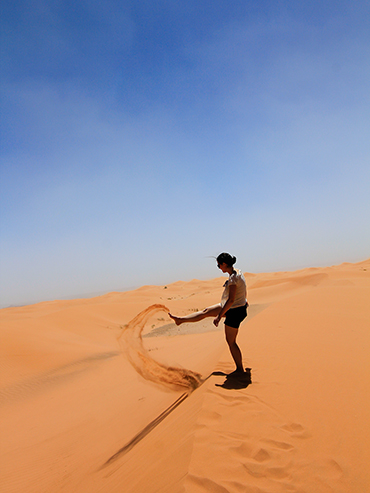 The desert is home to many Berber nomadic tribes. They settle along the plains of the desert in blanket covered tents, dressed in long Berber scarves wrapped around their faces. Women tend to the children and goats, the latter of which are watched closely by herding dogs. Camels or mules are used to transport goods. 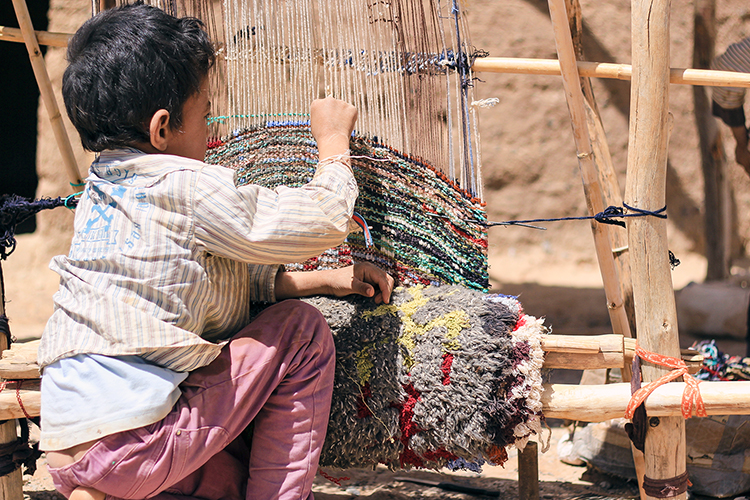 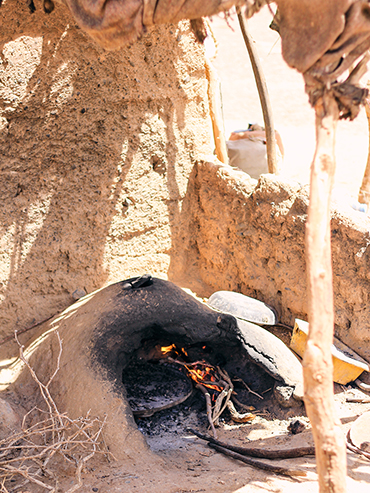 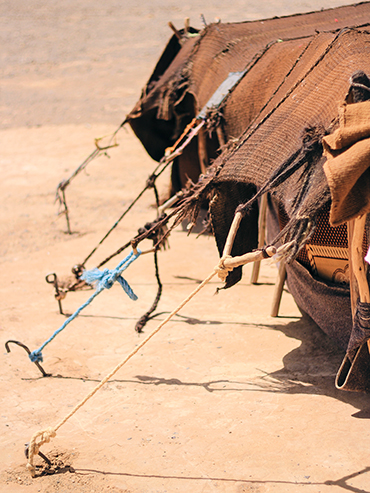 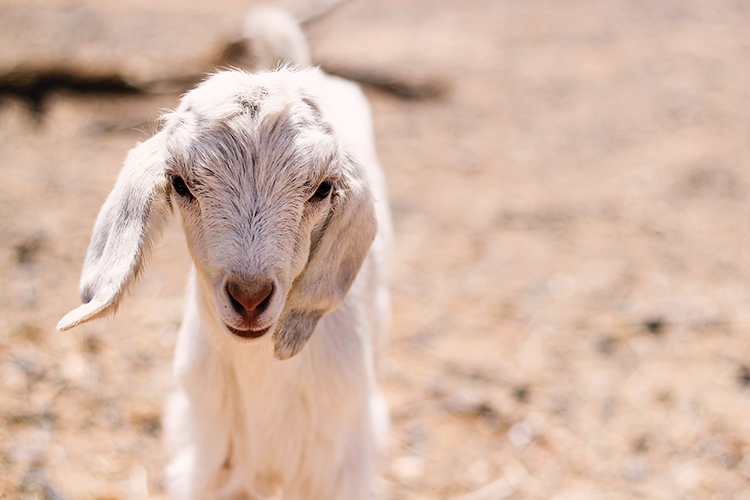 This region of Morocco has the largest underground water body in all of the country, which is partly why these nomadic tribes can survive in such harsh conditions. 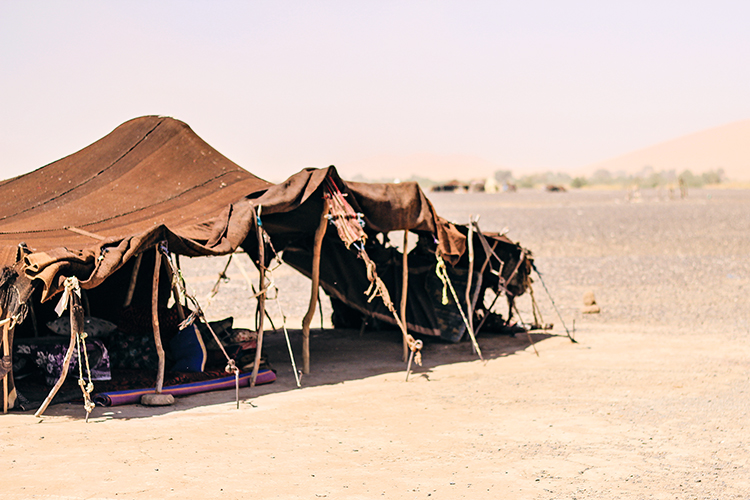 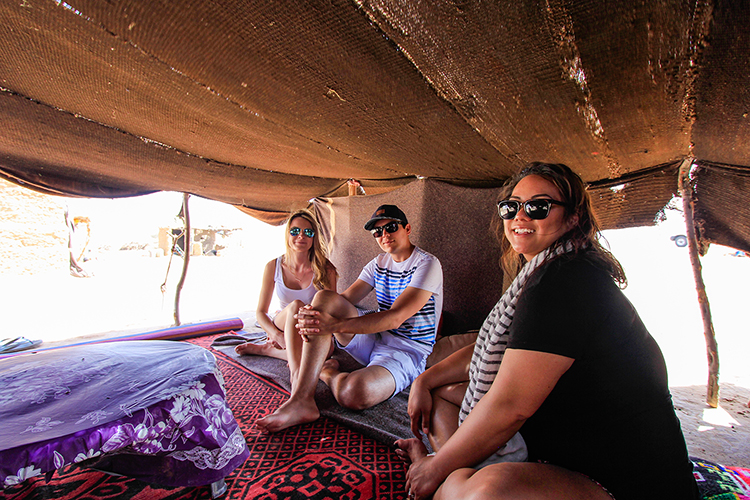 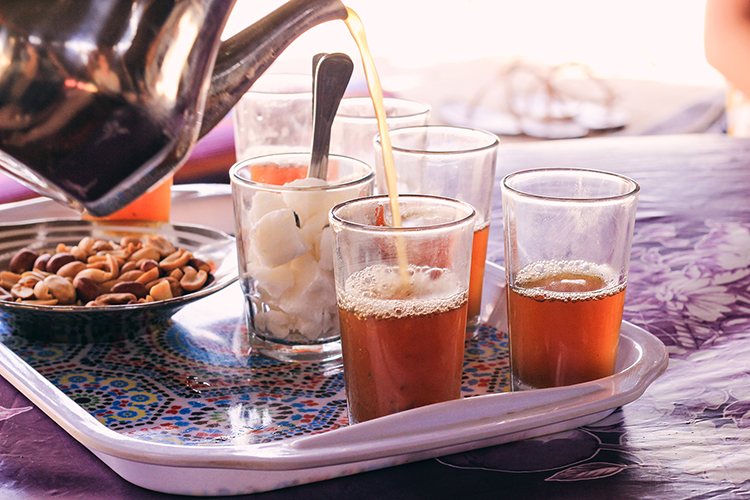 The nomadic people believe in a life of moving with the wind and flocks, and don’t believe in life with a job or fields to tend to. Though conditions are harsh and poverty is the reality, they believe their life to be rewarding and satisfying.

A nice thing to think about, isn’t it?

We booked our 4×4 excursion through the hotel we were staying at “Maison Merzouga”. The hotel is owned by a family who have been around for generations. They run the 4×4 tour out of their own hotel. Initially we did not know what to expect from the tour but it was very informative about the desert and we could ask our guide (one of the family members) any questions we had.

Overall, it was an eye opening experience and we learned that the desert is so much more than just sand. We were taken to different mines (active) and through old abandoned villages. We would highly recommend taking this tour if you are staying at Maison Merzouga; more information here.