Singapore is a city-state in Southeast Asia, and one of our stops on the way home from our honeymoon to complete our “trip around the world”.

Singapore is one of the world’s newer countries. It was initially a British trading post in 1819, and only started doing its own thing as a country when it became independent in 1965.

And somehow, in those 50 short years, Singapore has become one of the world’s most prosperous countries. It ranks as one of the highest in the world for education, healthcare, quality of life, and safety. The country is also fairly innovative in terms of its design and architecture. 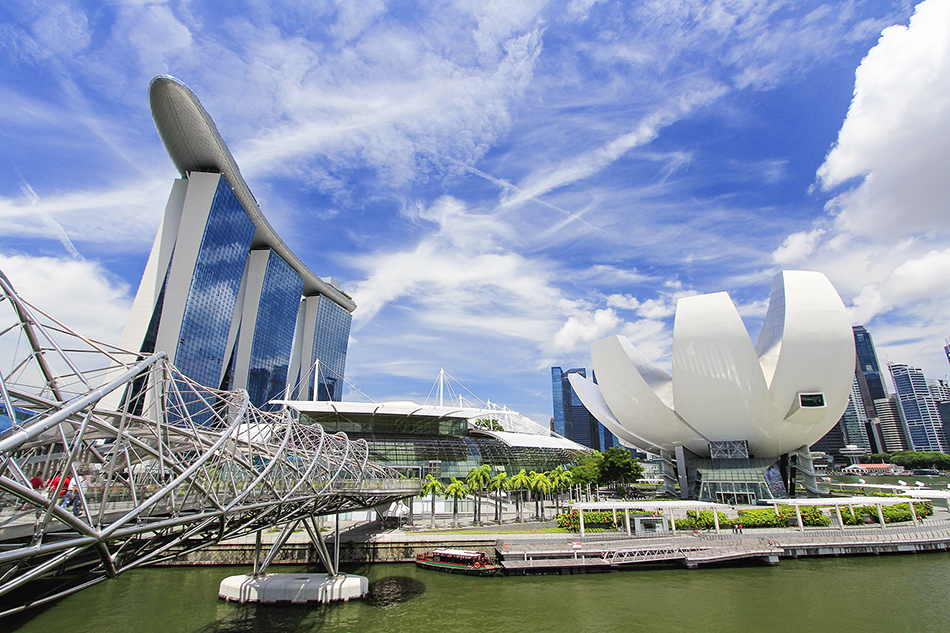 Plus, being a “younger” country, Singapore has been heavily influenced by its various Southeast Asian neighbors. Over 50% of the population are immigrants, which means it’s a bit of a melting pot. Just like Canada!

While we thought a couple day stop-over in Singapore would be enough, we quickly realized we were very wrong. There is so much to do in this little country: from the modern big city life, to taking a step back in time to the charming streets of Chinatown and Little India. Singapore needs much more time than we gave it, and we’re already looking forward to our return! 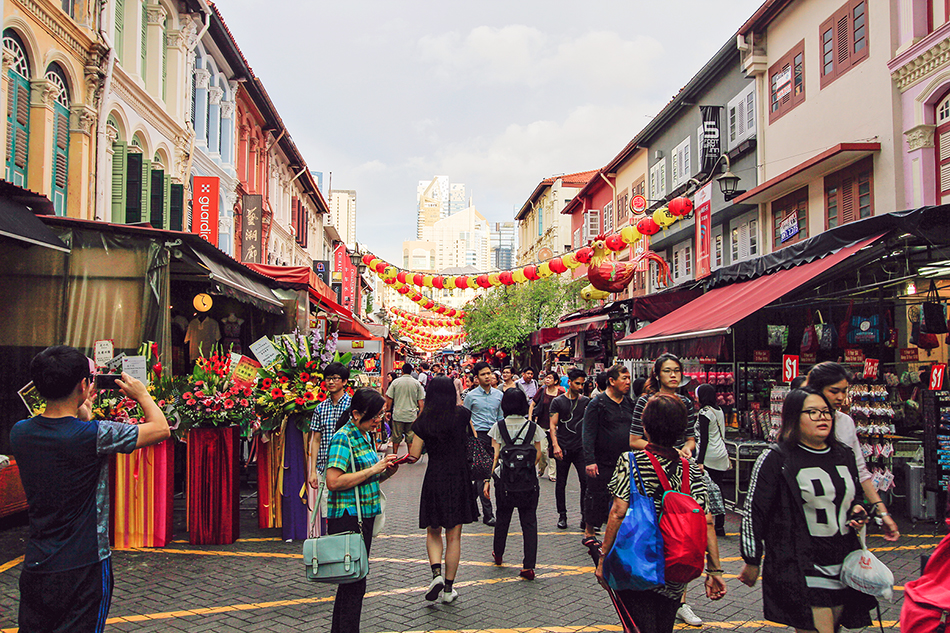 Singapore is a small island just south of Malaysia. With its 5.5 million people crowded into what is essentially just a big city, it’s the second most densely populated country in the world (right after Monaco). The entire country is smaller than New York City.

But what happens when you have a tiny peice of land and an enlarging population?

You need to make more room! Singapore has already increased its mass by 22% by reclaiming land. This basically means going out into the ocean to dig up some sand, and then dropping it into the sea beside your country to make new terrain. For example, this entire piece of land was made with reclaimed sand: 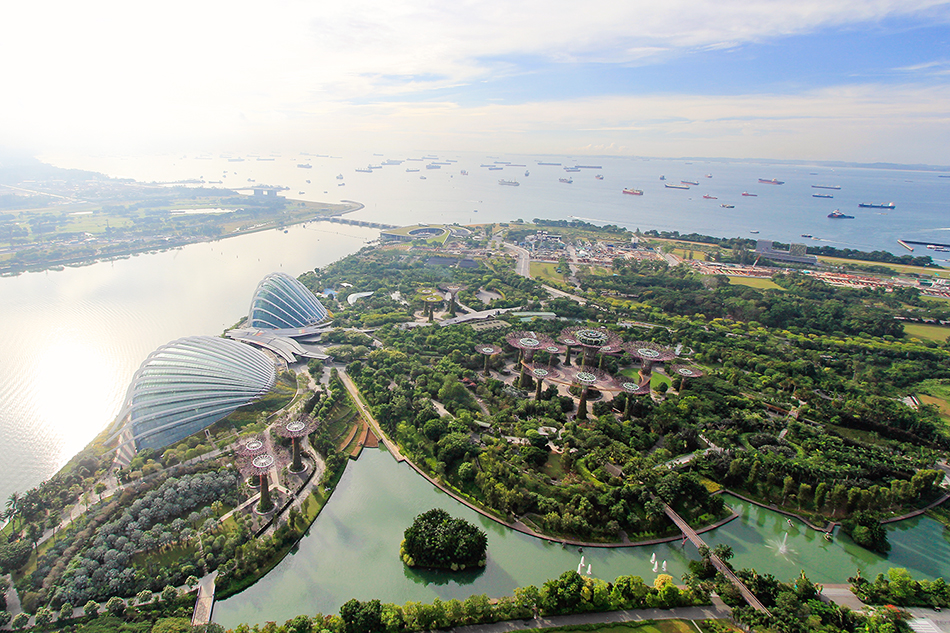 Singapore has been reclaiming so much land that it has run out of its own sand. The country has resorted to buying sand from its neighbours, making it the largest importer of sand worldwide.

Unfortunately that didn’t last for long. The other countries have gotten fed up, and Cambodia, Malaysia and Vietnam have all banned Singapore from buying any more of its sand. Which environmentalists are happy about, as there are numerous concerns about shifting the ocean floor…

In other efforts to make efficient use of space, Singapore has also resorted to developing its underground world. Multiple floors below the ground are dedicated to the subway, underground roads and walkways, and even one for military and ammunition storage. 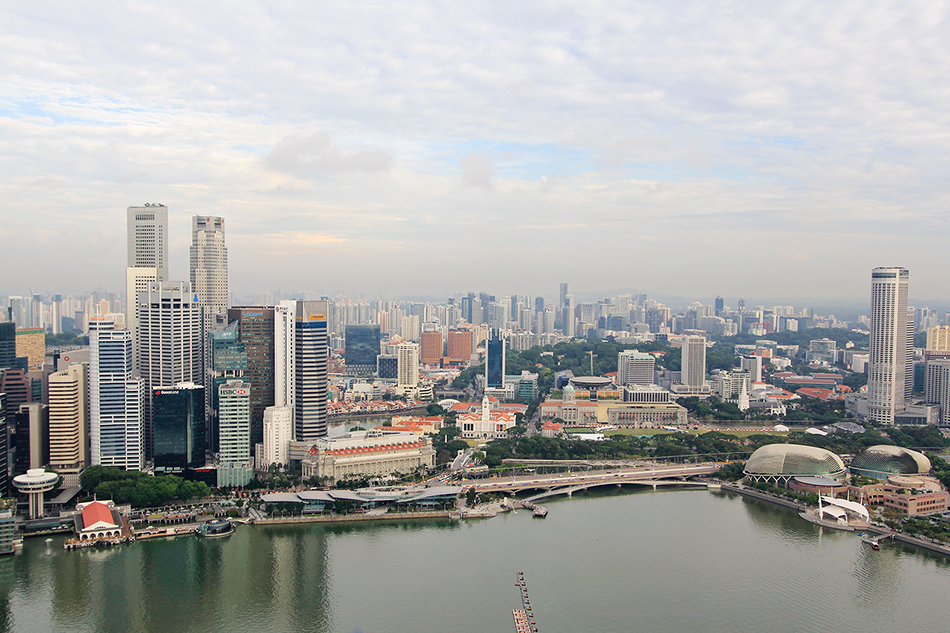 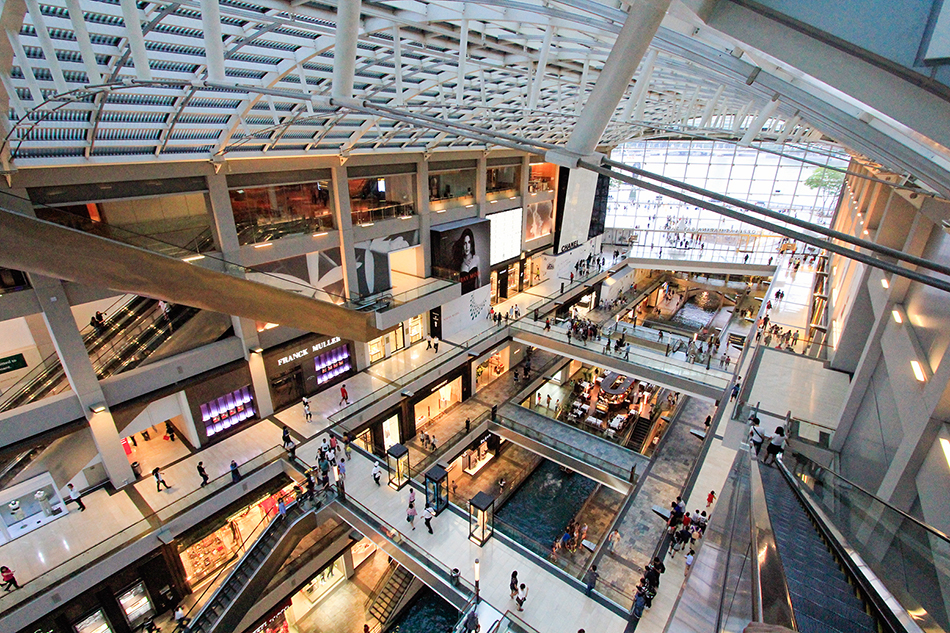 Singaporeans are also clever with the space they do have. For example, the underground subway stations are built in massive dimensions so they can act as underground bunkers if needed in a time of war.

Despite being tiny, somehow Singapore has managed to cover over 50% of its land with gardens and green spaces, giving it the name “Garden City”. The city’s motto is not to “build a garden within a city”, but to “build a city within a garden”. 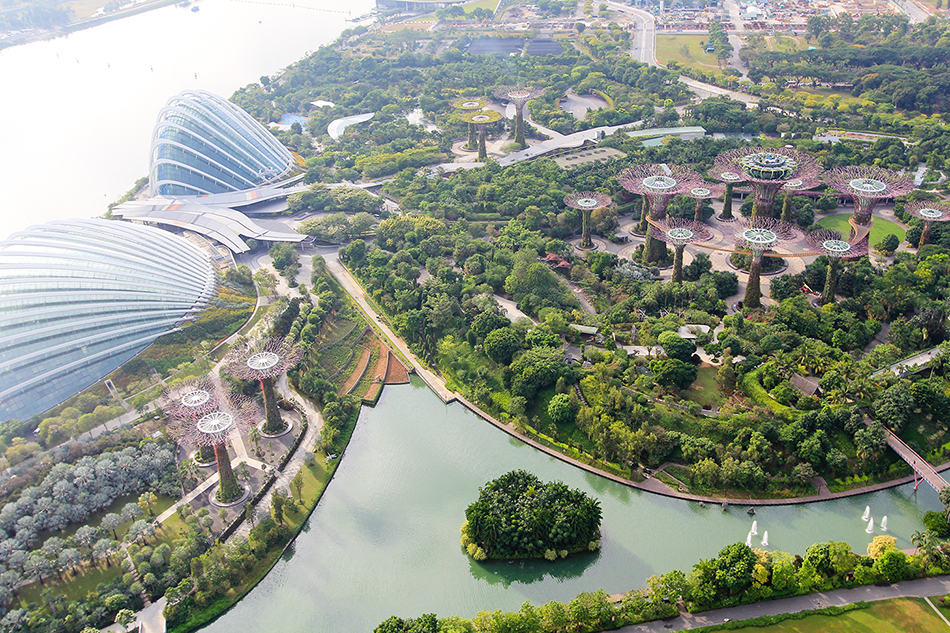 One of the most popular garden spaces in Singapore are the Gardens by the Bay. This 250-acre park was created on some of Singapore’s reclaimed land and is full of greenery and gardens. The most striking of their flora are these man-made “Super Trees”: 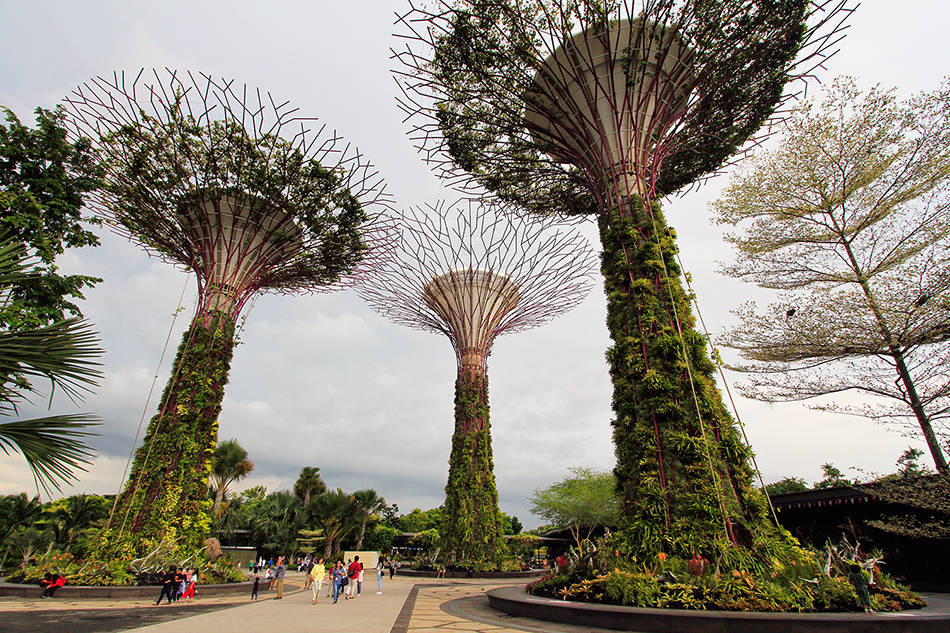 Super Trees are man-made structures that tower up to 50 meters in height, and are covered in vines, mosses and exotic orchids. They are made to function like real trees. They harness solar energy, collect rainwater, and even serve air intake and exhaust functions for the buildings within the park.

The Gardens by the Bay is also home to two conservatories: the Flower Dome and the Cloud Forest. 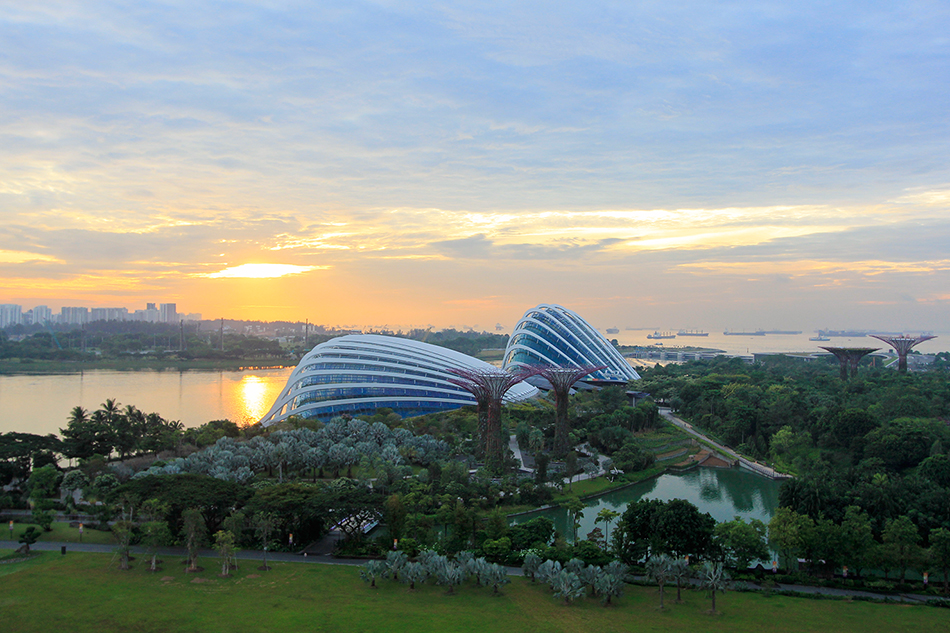 The Cloud Forest was our favorite, a glass covered dome with a large mountain of greenery in the center and a large waterfall cascading down.

You start your way at the top, and wind down the “mountain” while seeing the varying plants that grow at different altitudes. Every now and then the sprinklers turn on and the shroud of mist makes it feels like you’re walking through a fluffy cloud! 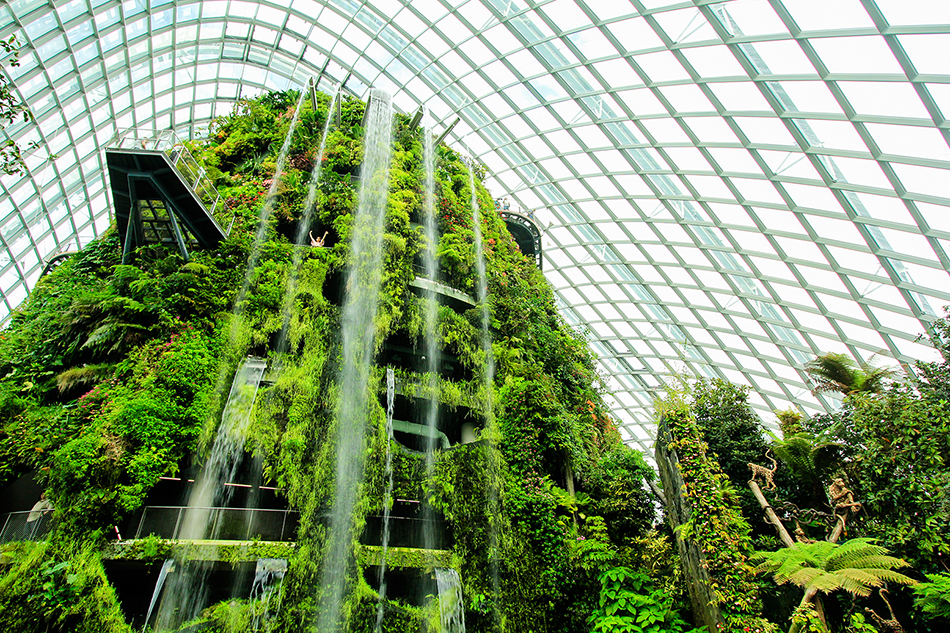 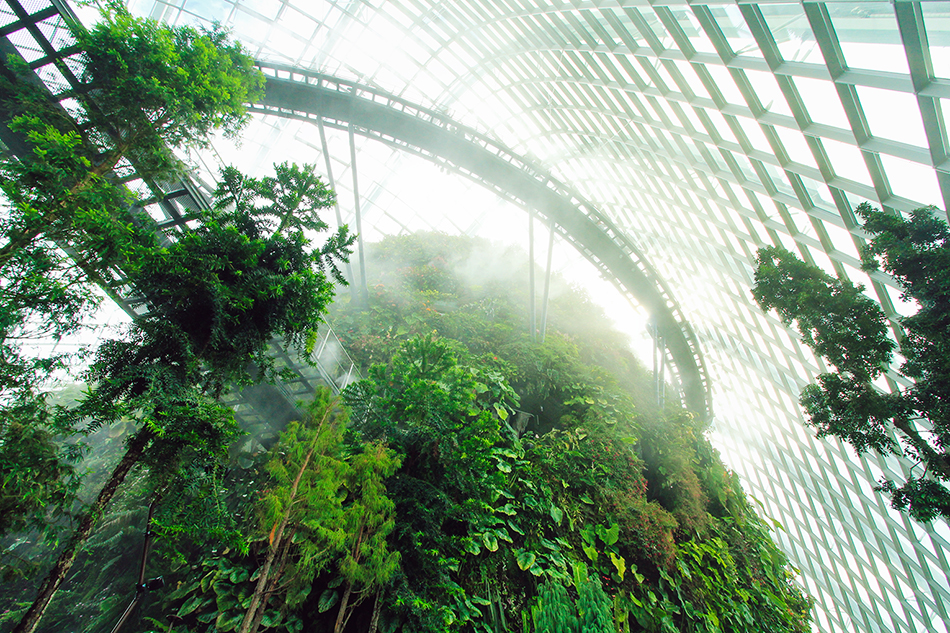 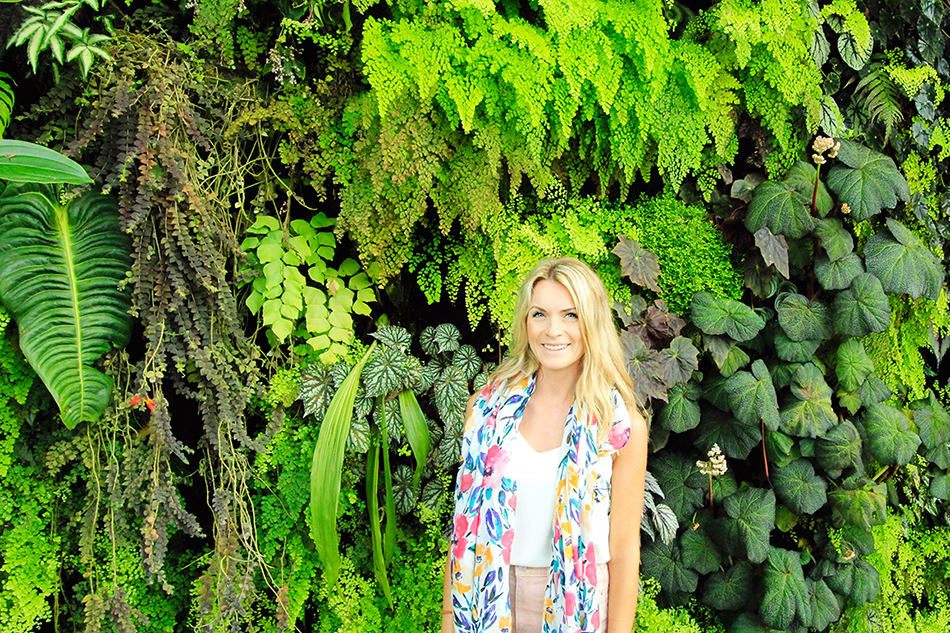 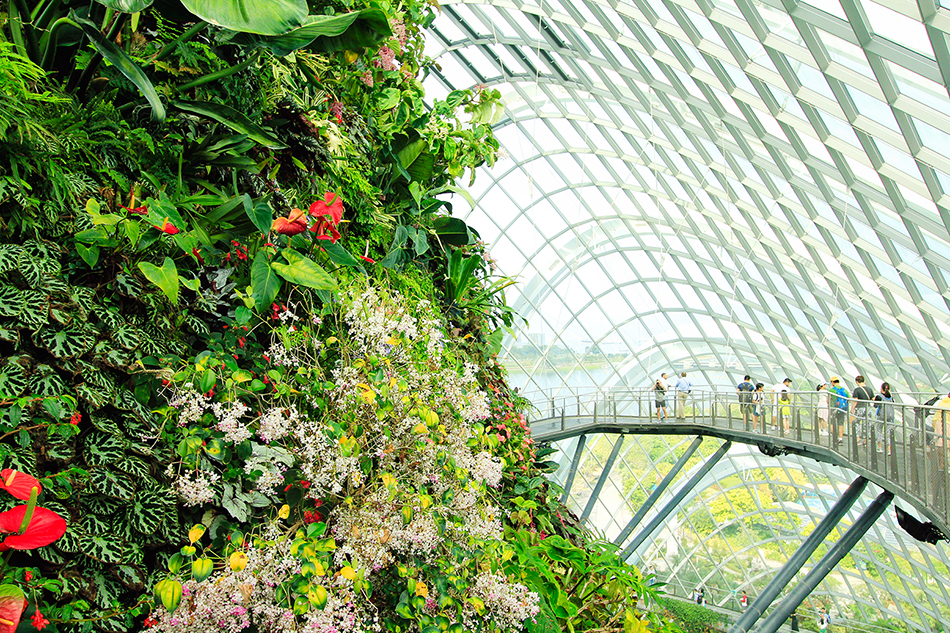 The Highest Infinity Pool in the World

On the same land that the Gardens by the Bay were created is the Marina Bay Sands Hotel. This 5-star hotel is the iconic landmark of Singapore with it’s 3 tall buildings connected by a large aerial platform made to look like a boat: 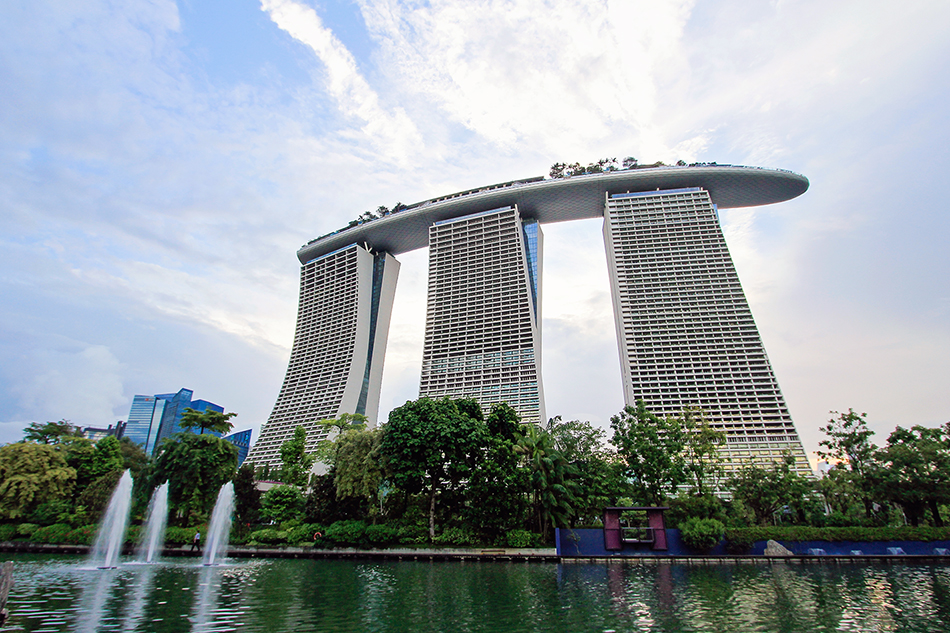 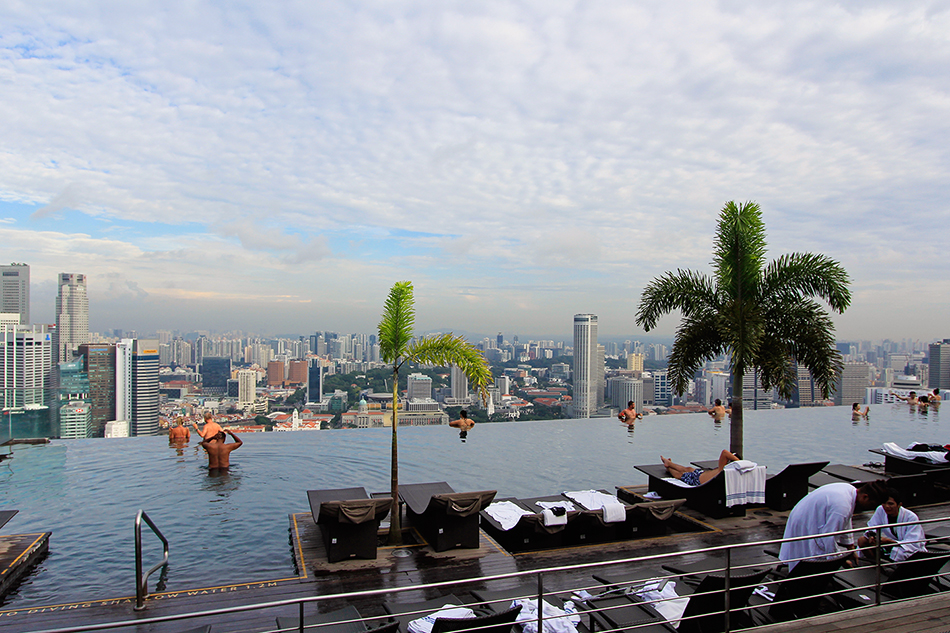 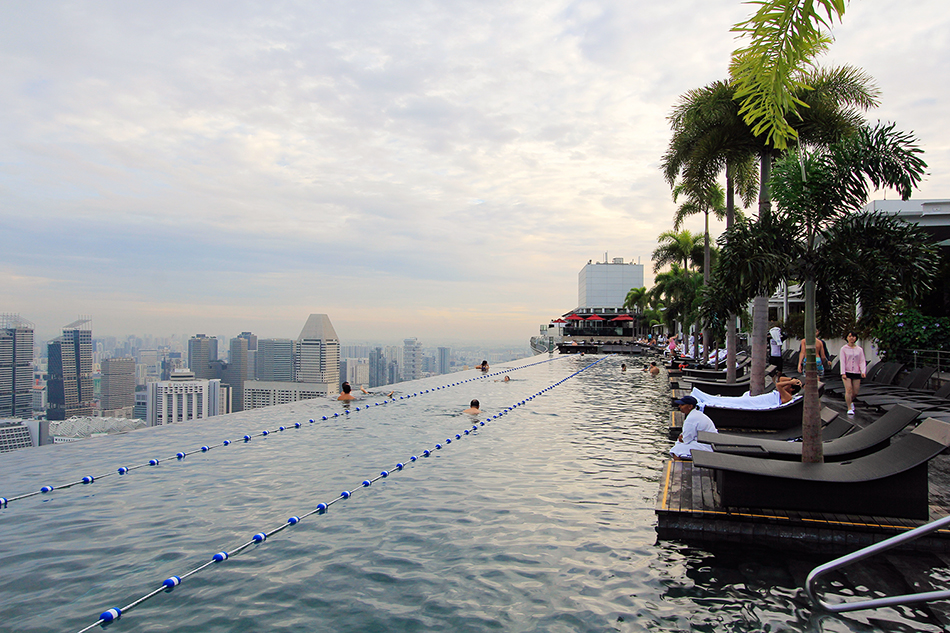 The only way to visit the pool is by being a guest at the hotel, and we figured our honeymoon was the perfect excuse to book a night’s stay. Though we are normally not “morning people”, our early morning flight got us into Singapore at 6 AM and we used this as an excuse to get into the pool to watch the sunrise. 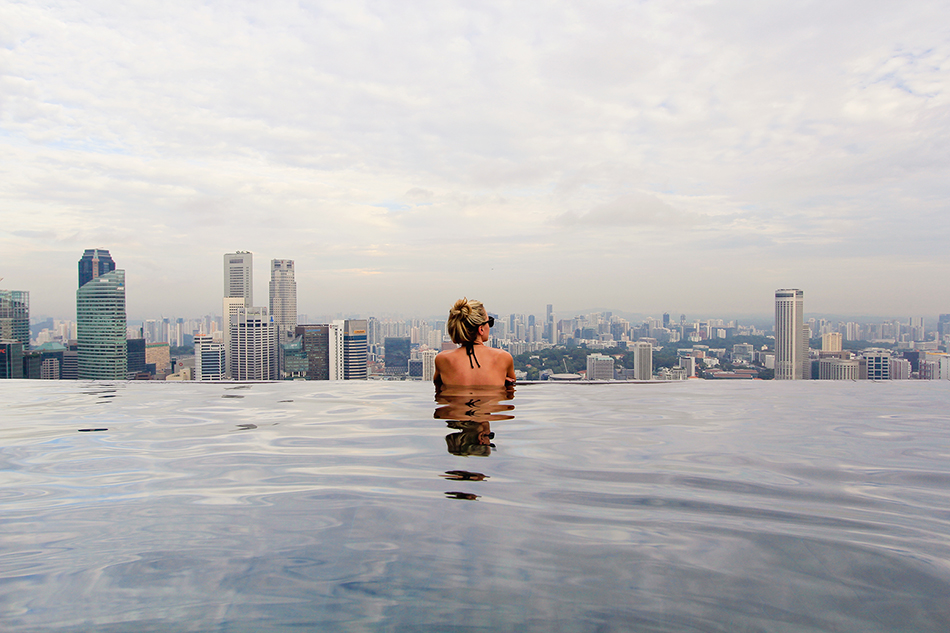 Which was a brilliant idea, as there were only a few others who dared to wake up that early and we felt like we had the whole place to ourselves. Which you only come to appreciate when you return later in the day and realize that the pool is an Instagram haven.

From the pool, the views of the city are amazing, and its definitely worth a stay at the hotel to take a swim. We even ended up coming back to the pool at night to watch the city light up right before us.

Street Food is Kind of a Big Deal

I don’t know if you can read or talk to anyone about Singapore without talking about the food. Singaporeans pride themselves on their food culture, and it’s hard not to take part while you’re here.

Something unique to this part of Asia are “Hawker Centers”, which are basically open-air food markets with multiple street stalls selling quick and inexpensive food. In this case, cheap food doesn’t equal poor food: some of these stalls are Michelin-star rated! 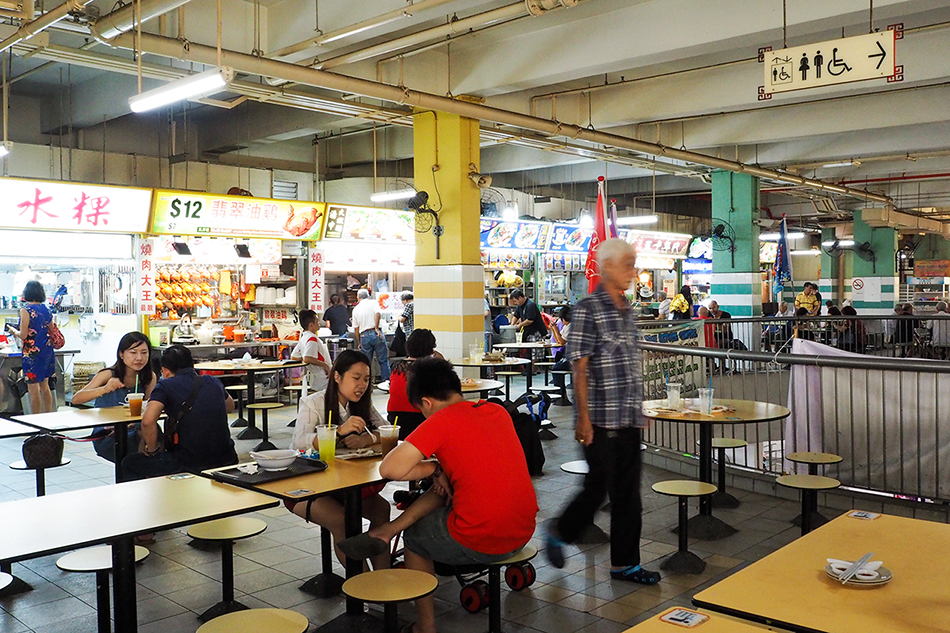 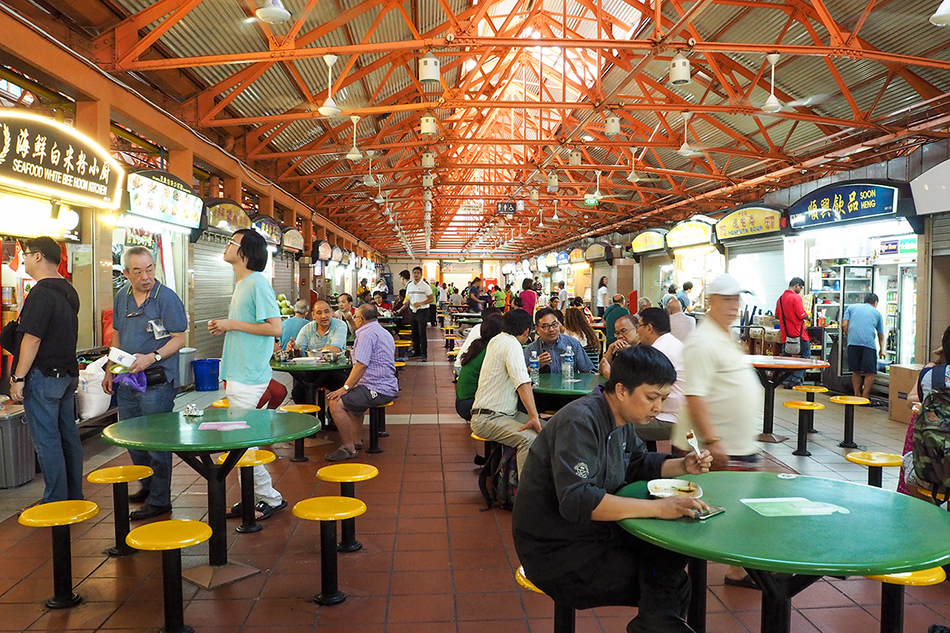 With our limited time in the country, we figured a food tour would be the best way to experience as many of the highlights as possible. We tried a number of tasty dishes, and watched huge lines form outside the popular stalls. 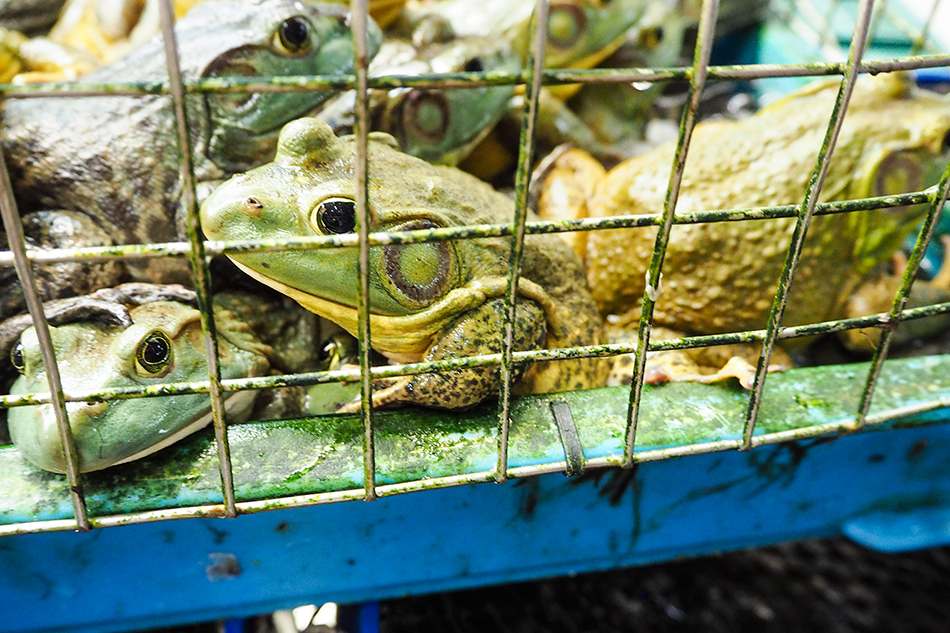 A Trip Into Space

One of our favorite stops was the ArtScience Museum, full of interactive artwork that kept us both entertained for hours. 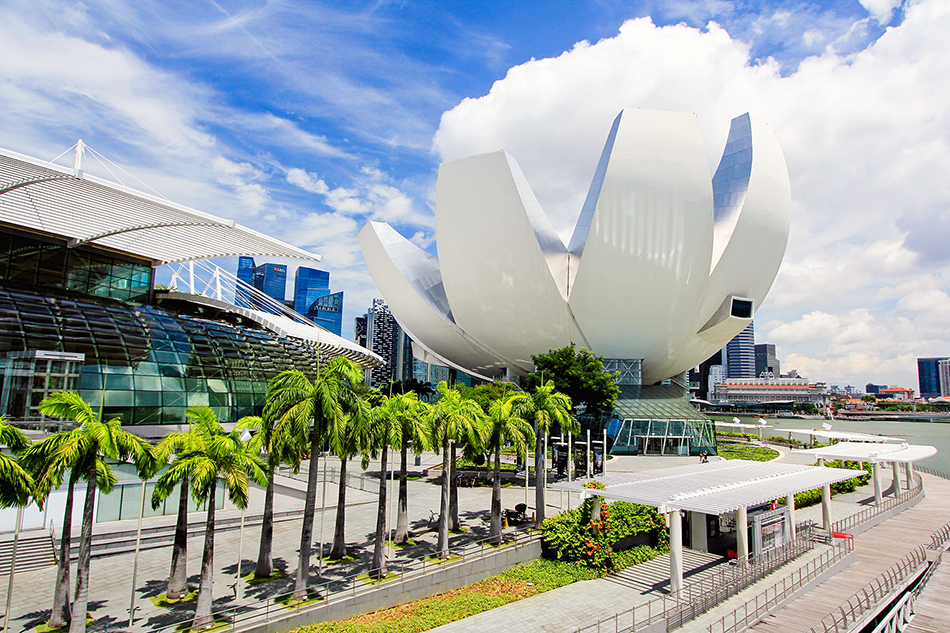 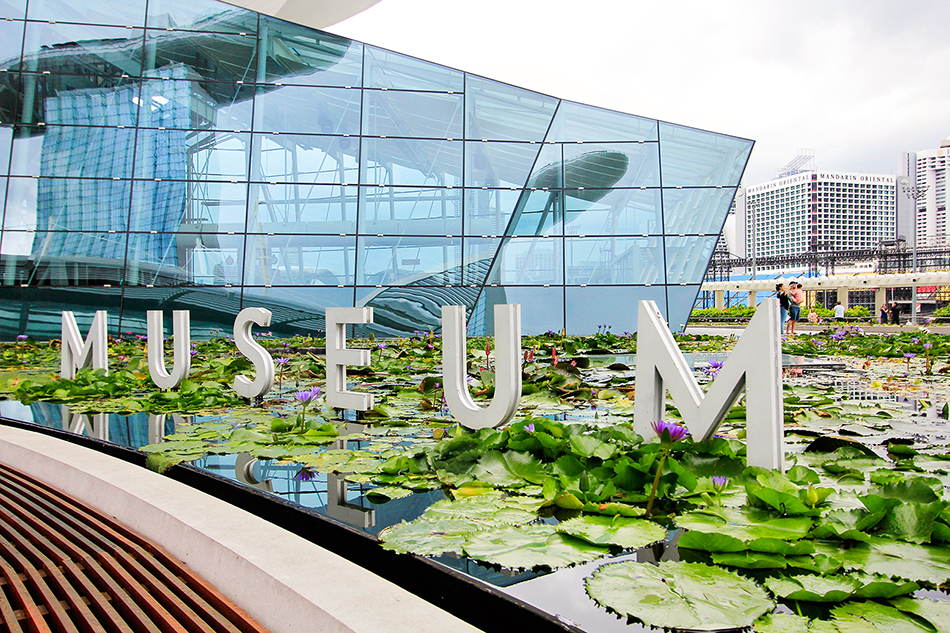 “Crystal Universe” was my favorite exhibit: a room meant to take you on an otherworldly experience into space. You stand in the center of a room full of 170 000 LED lights that swirl, dazzle and move around you. It was incredibly cool, and though I’m sure we were meant to spend 5 minutes in the room, we were there for nearly an hour. 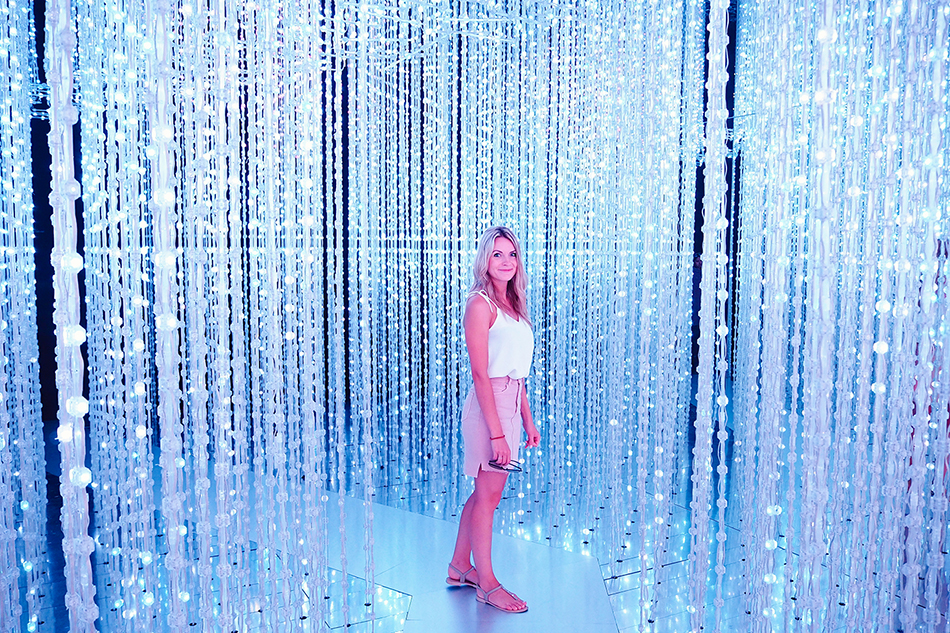 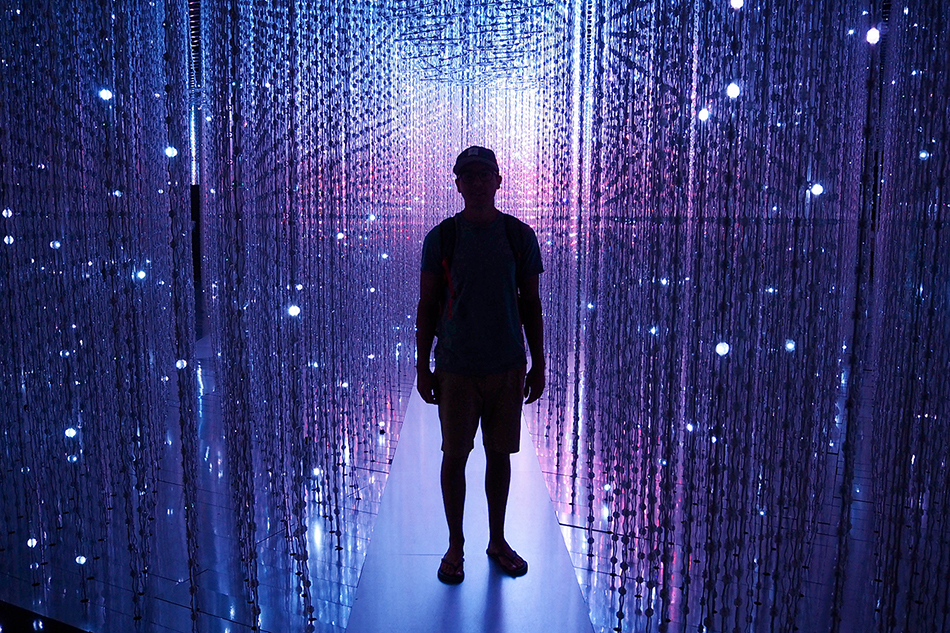 There are numerous activities to partake in in Singapore at night.

With their downtown full of skyscrapers, rooftop bars are a popular late night hang out spot. And the views are incredible from 282-meters above the ground. Especially if a glass railing doesn’t freak you out. 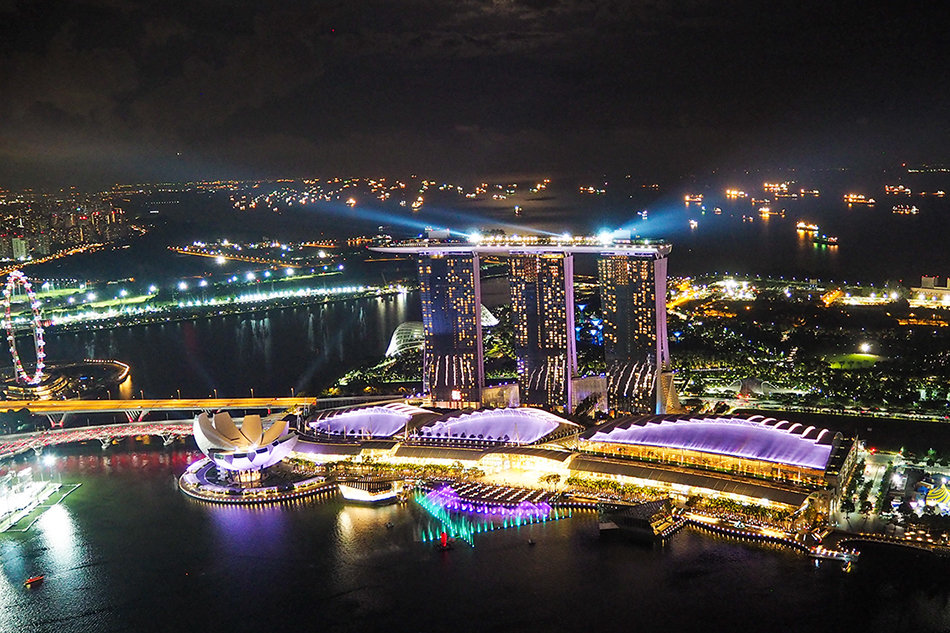 We talked about the Super Trees already. And though they have important jobs during the day, these trees know how to party. Every night the “Garden Rhapsody” begins, where the trees come alive with a light and music show: 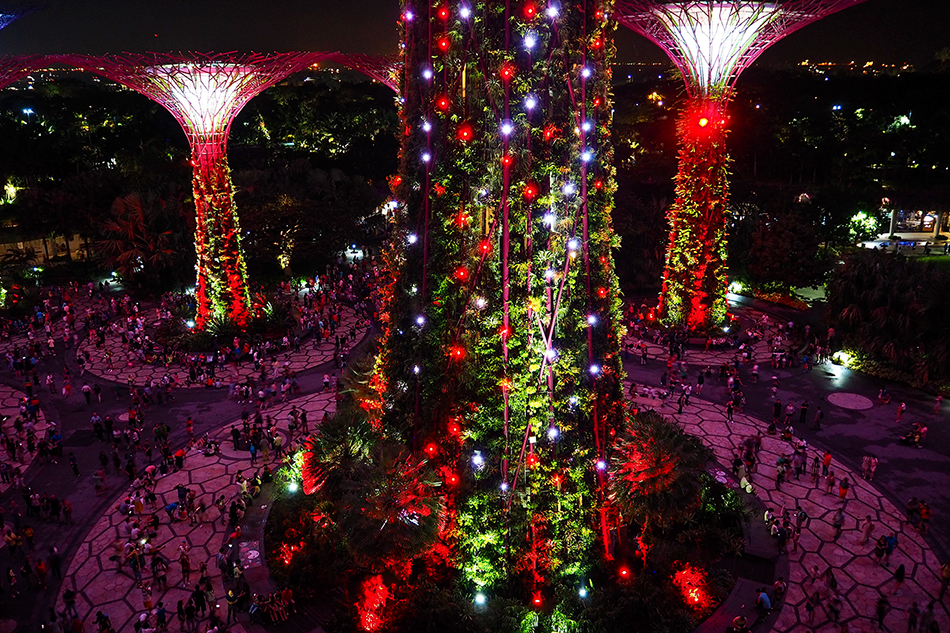 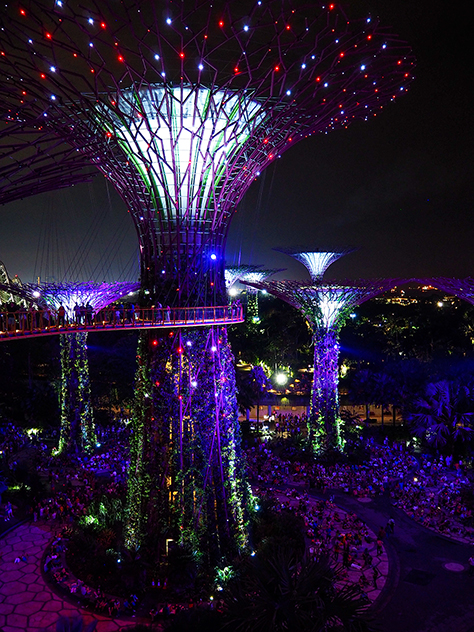 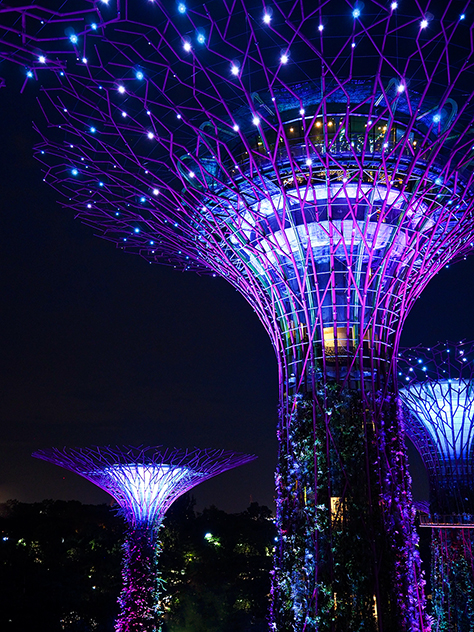 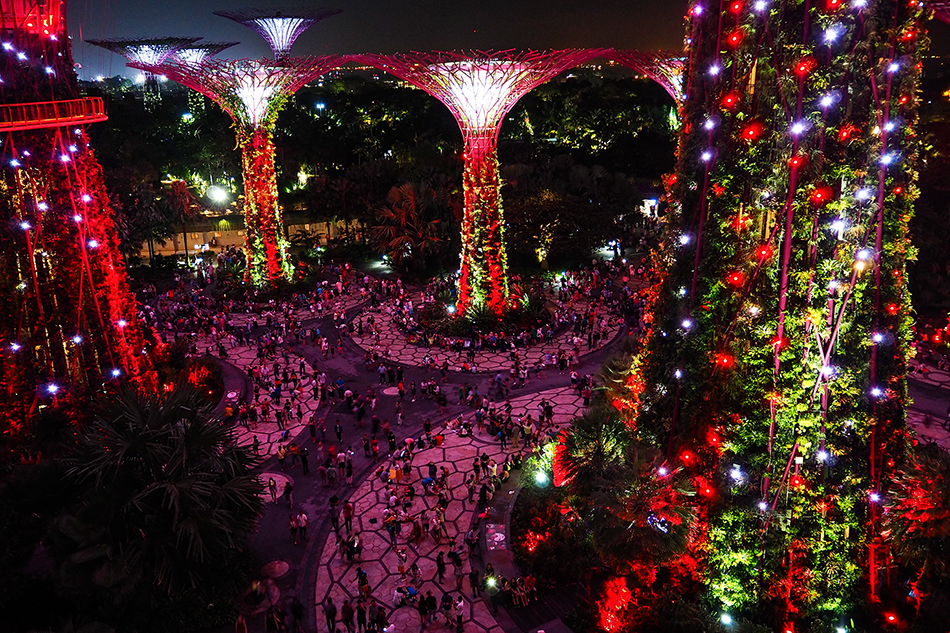 And not far away, along Singapore’s shore, is a large water fountain which places a music & light show every evening. It’s a great show, and should not be missed. Our recommendation? Pick up a bottle of beer and a glass of wine from the nearby subway 7-eleven, and you’ve got it made: 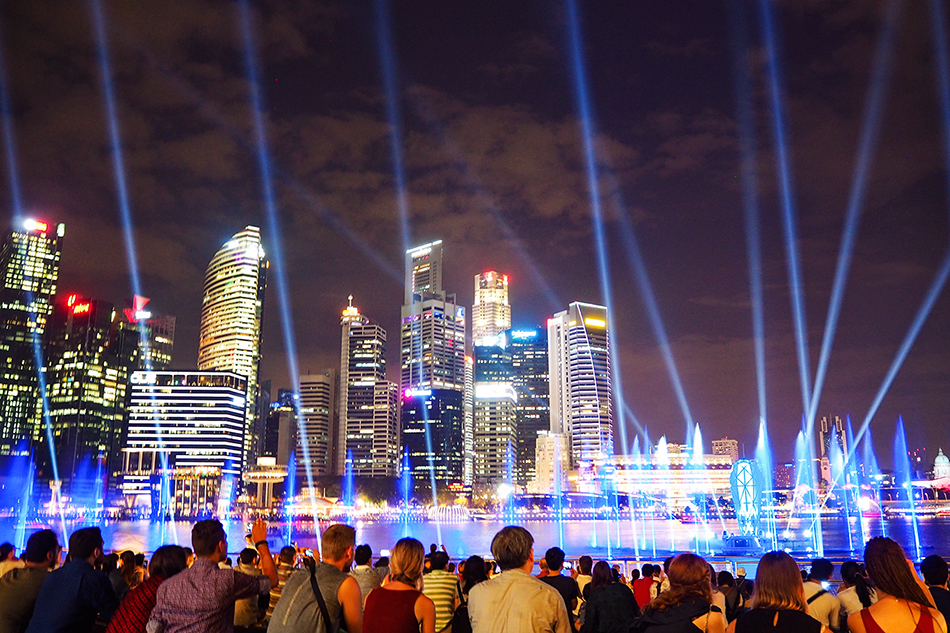 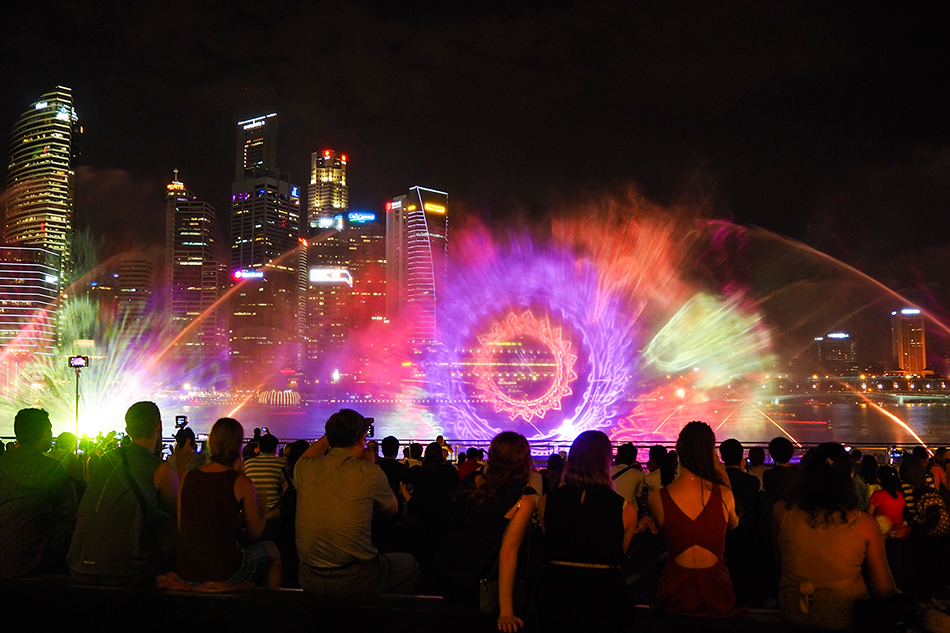