How Swiss Cheese is Made 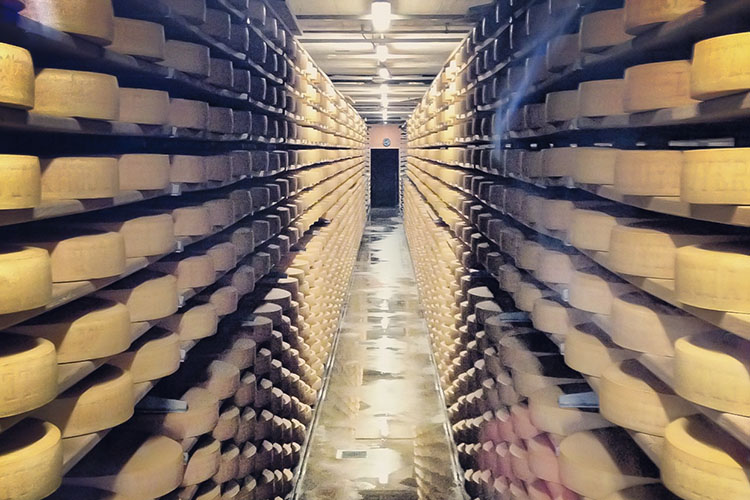 Having now visited two cheese-making factories in Switzerland – one in Appenzel and one in Gruyere – we figured we’re pretty much experts on cheese. Well, not really, but either way we thought we would summarize our findings into a post dedicated just to cheese. Because I figure some people are as nerdy as we are, and if not, I figure who doesn’t love cheese?

By the way, this always confused me (I guess I’m now making the assumption it confused you too): When people in North America say “Swiss cheese” referring to the yellow cheese with all the holes, they are actually speaking of Emmental cheese. But, the many cows of Switzerland make much more than just Emmentaler cheese: other Swiss cheeses include Appenzeller, Jarlsburg, Tilsiter, Sbrinz and Gruyere.

Our favorite? The cave-aged Gruyere cheese. Hands down. 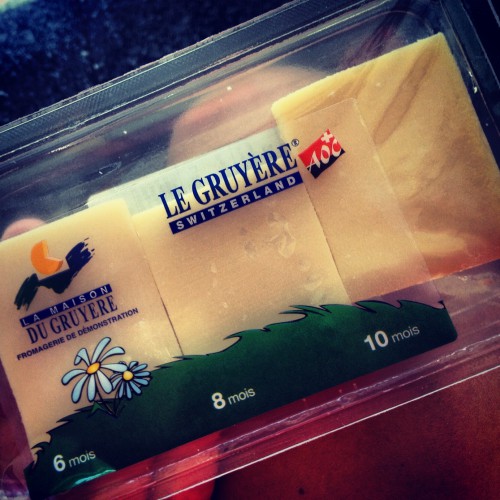 Based on our factory tour at Gruyere (each cheese-maker’s process will vary slightly), here is an overview of how Swiss cheese is made:

Once the milk is gathered, it is placed in a large vat at the cheese-making factory and stirred constantly to a warm temperature. A skilled cheesemaker is responsible for looking after all steps of the cheese-making process and ensuring the right temperature at each stage, as well as recognizing when the cheese mixture is ready for the next step in the process. 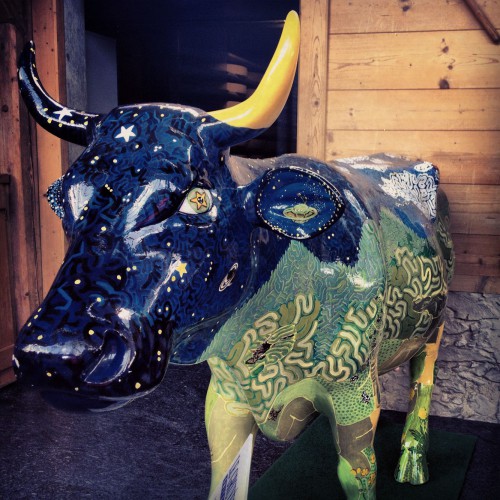 Once at the right temperature, two substances are added to the milk:

The combination of these two takes an expert eye as this is what determines the quality of the cheese.

Step 3. Cutting of the Curds

Once the milk thickens to a custard-like texture, large rakes stir the mixture and break it up into tiny grain-sized pieces. This process separates the water (whey) from the curds.

The whey is then drained off and used as pig feed. The curds are transported via a large pipe and poured into cheese forms or wheels.

Once in their wheels, the cheese is placed in a hard mold and pressed by a hydraulic press exerting pressures from 300-900kg. This further removes any liquid.

At this stage, the cheese is also imprinted with an identifying mark which enables each one to be traced back to its manufacturer.

After about a day, the cheeses are removed from their molds and each wheel is immersed in a brine water bath (20% salt). This is what makes cheese so salty: here the cheese absorbs half its final salt content. This is also the stage where the cheese rind forms.

Each type of cheese has its own secret brine bath recipe, as this is what gives a cheese its particular aroma. Soft cheeses stay in the bath for only 2 hours, while hard cheeses can stay up to 72 hours.

In the final stage, the cheese wheels are matured in cellars with humidity over 90% and well controlled temperatures to allow the cheese to acquire its full flavor. You can’t just leave the cheese and forget about it; this is as much of a job for the cheesemaker as the beginning steps!

At this time, the cheese wheels continue to be rubbed with salt and turned. In Gruyere, the wheels are turned and rubbed daily for the first 10 days, then twice weekly for 3 months, and weekly thereafter. Again, this salt recipe tends to be specific to each type of cheese. For example, Appenzeller cheese is rubbed with a salt mixture of white wine, herbs and spices. 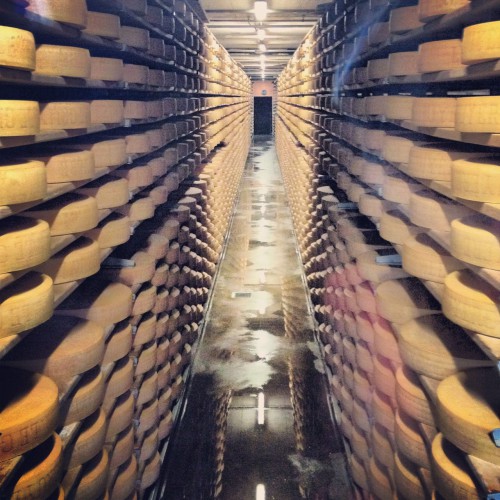 Throughout the whole process, the cheese is consistently inspected for quality. Inspectors use coring probes to take small samples to check taste and texture, and even use tuning forks to check for cracks beneath the rind.

Now that you know all about the process, which Swiss cheese should you try?

Gruyere: As mentioned above, this is our absolute favorite of the Swiss cheeses. It is made in the town it’s named after. It is a mixture of salty and sweet with a nutty flavor. It is a hard cheese, but melts well making it great for cooking.

Emmentaler: This classic hole ridden “swiss cheese” is a mild and fruity soft cheese. Made in the Bern region of Switzerland. Pairs well with light wines or beers, and good for use in sandwiches. Used in traditional swiss fondue.

Appenzeller: A slightly spicy cheese with fruity sharpness. Made in the region around Appenzel. Goes well with apples and other fruits.

Other types include Sbrinz, Tilsiter, Tête de Moine, Vacherin Fribourgeois, Vacherin Mont d’Or and Schabziger. The fact that we haven’t sampled them all makes me feel justified in returning for another trip around Switzerland.