Predjama: A Castle Built into a Cave 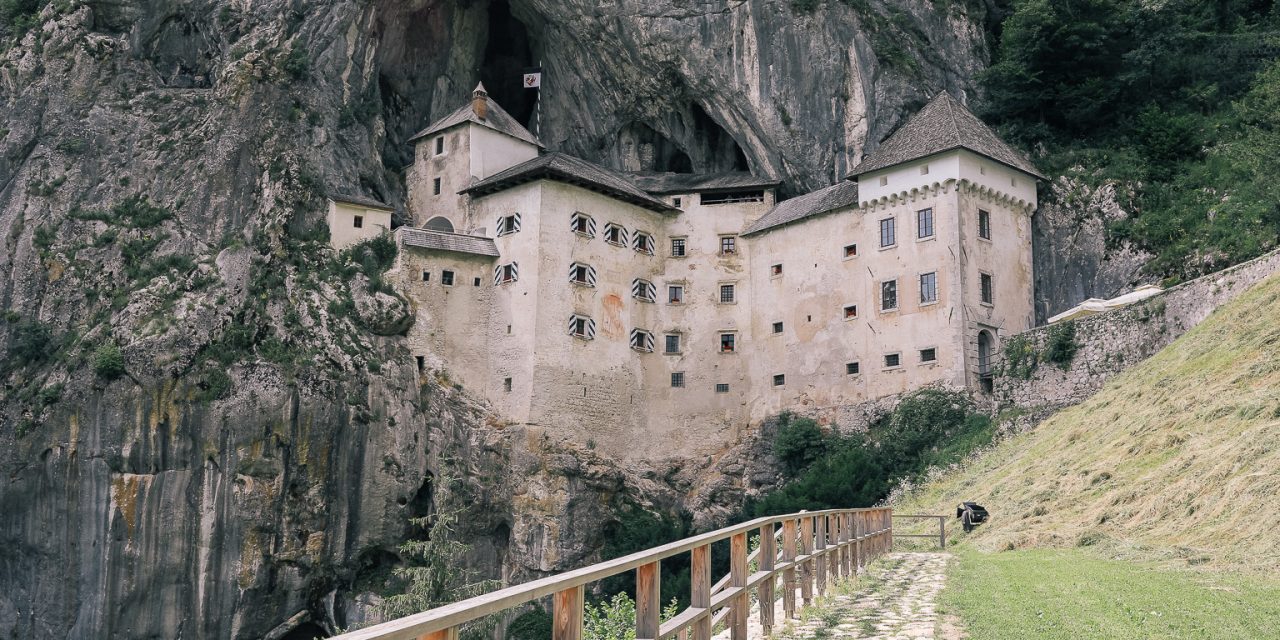 Predjama Castle is likely one of the most dramatic castles you’ll see, built into the mouth of a cave, 132 m up the side of a cliff. It looks impenetrable! 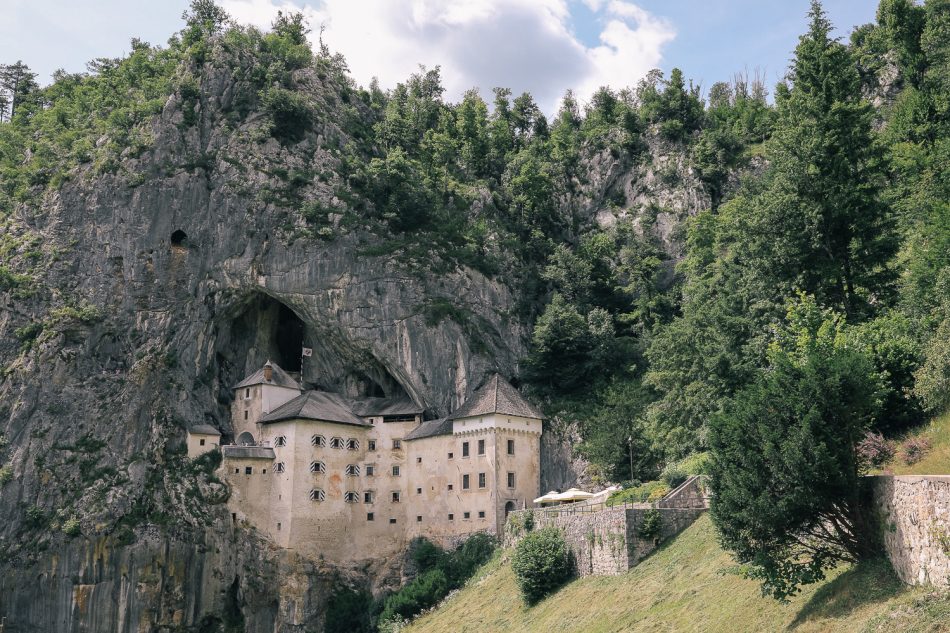 The castle originally dates to 1202, but was expanded over many years into the castle it is now. It was the former home of Erazem, a guy who was basically the Robin Hood of Slovenia. He stole from the King and gave money to the poor.

Eventually the King got tired of his actions and sent his whole army to destroy Erazem. Little did the King know that Erazem had built a castle on the side of a cliff with a secret escape route into the nearby cave system. 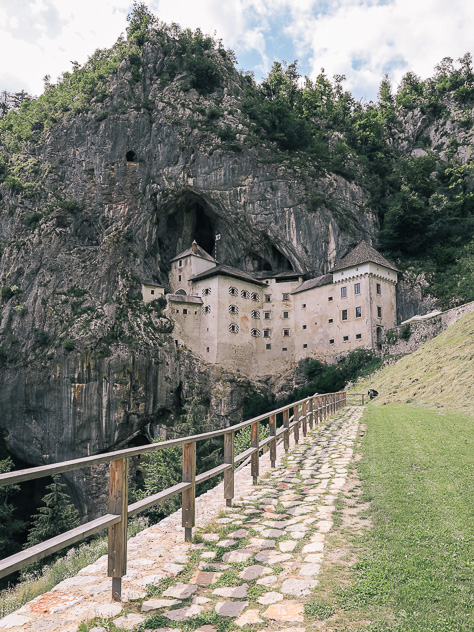 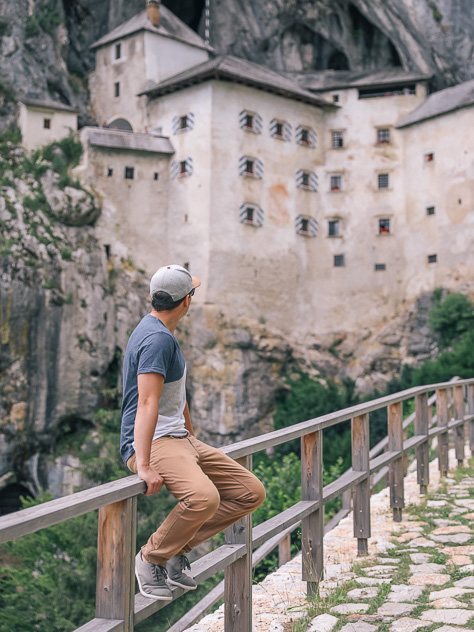 The army fought him for over a year and could not understand how he continued to get supplies. Erazem was sneaky and went through the cave to get fresh food, letting him hide in the castle for endless days. Which is pretty handy when you’re trying to fight off an army by yourself!

Unfortunately, Erazem built his bathroom along an exposed exterior wall of the castle. One night, when he went to use the toilet, a cannon ball blasted through the wall, killing him instantly. Oops. 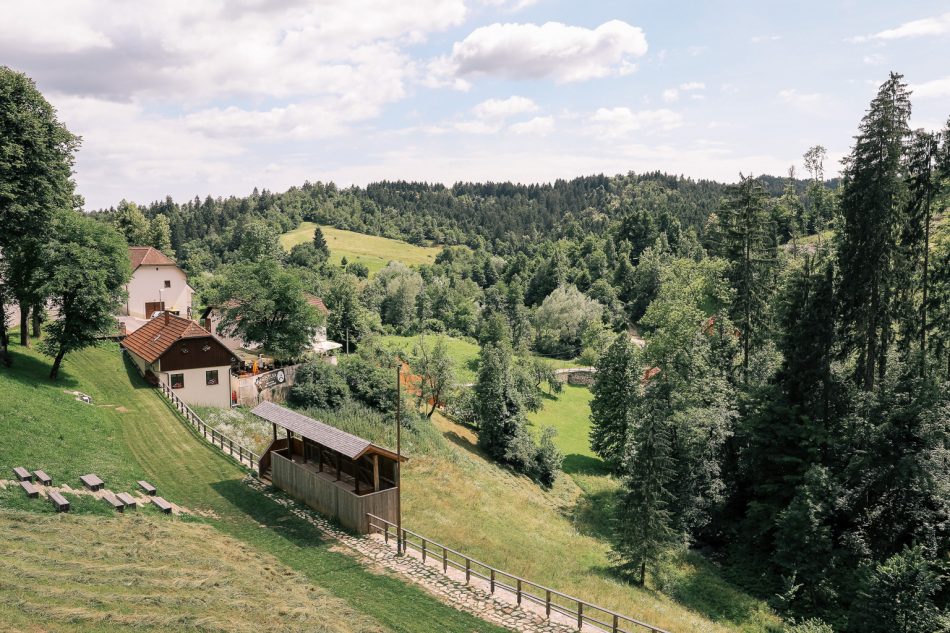 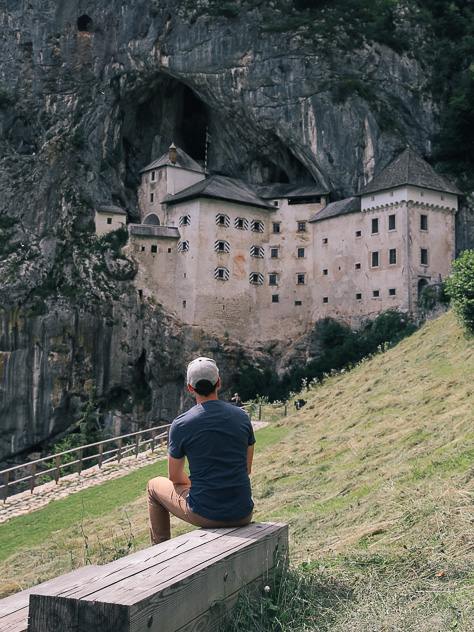 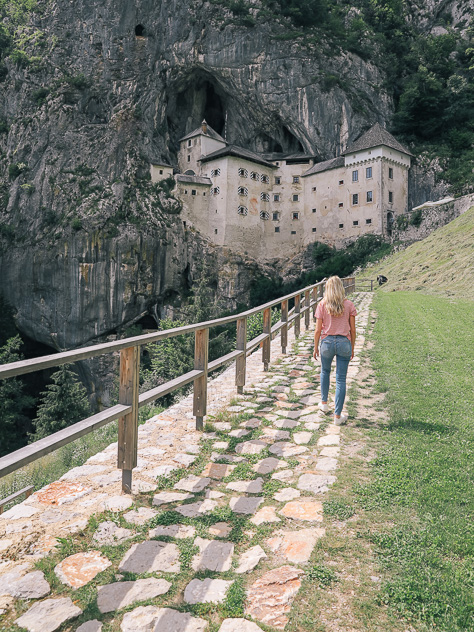 Despite the ironic story, the amazing part of this castle is its secret passageway connecting it to a large 14 km underground cave system. And luckily for us, a portion of these caves are open to visitors…

Slovenia is located on a large slab of limestone bedrock, making it the perfect habitat for the formation of large and complex cave systems. Since limestone is soft, it is easily eroded by water leaving large canyons and caves in its path. 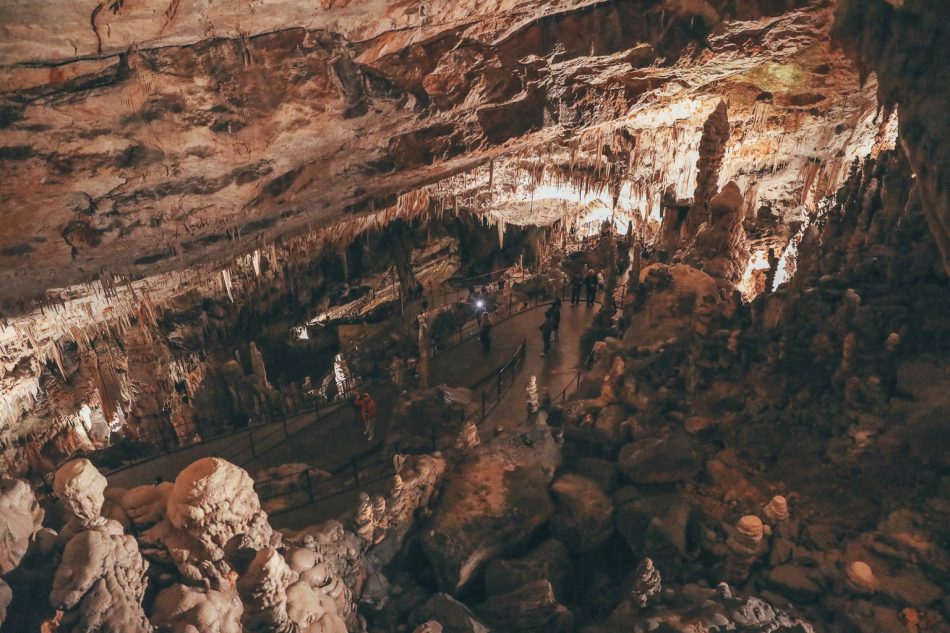 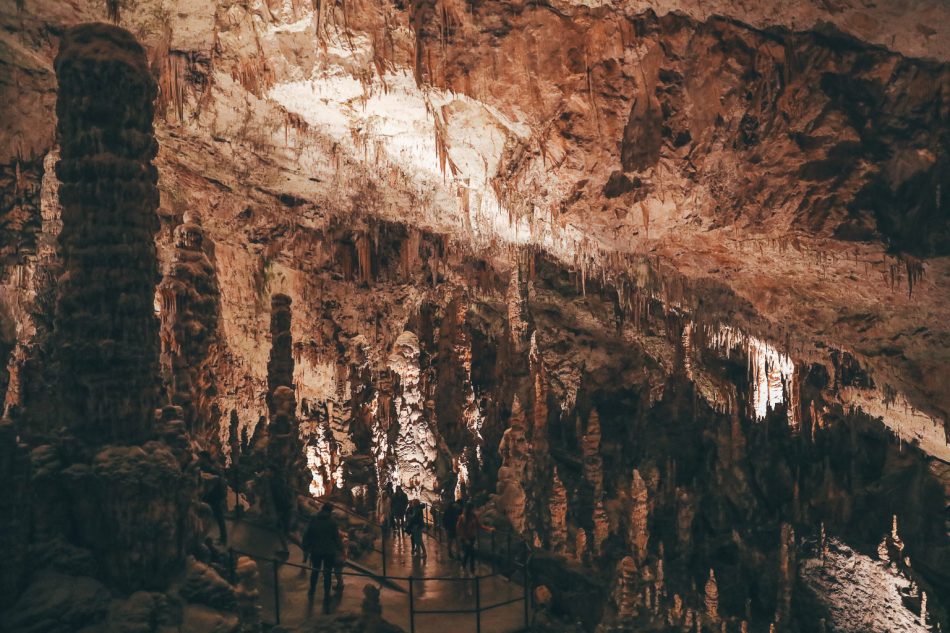 Postojna Caves are part of the cave system used in Ezarem’s escape. Perhaps because of its link to Ezarem’s tale and the Predjama Castle, these caves are now very well developed for visitors. It’s like a Disneyland for caves, with a hotel, multiple restaurants, and souvenir shops located at the mouth of the cave. Even the ride down into the depths of the caves are via an amusement park-like train ride. 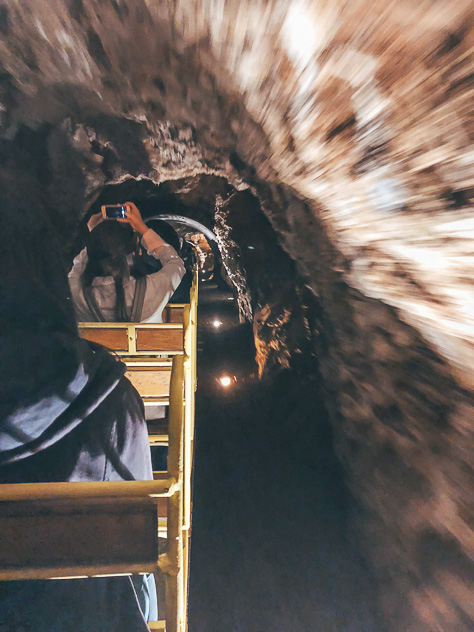 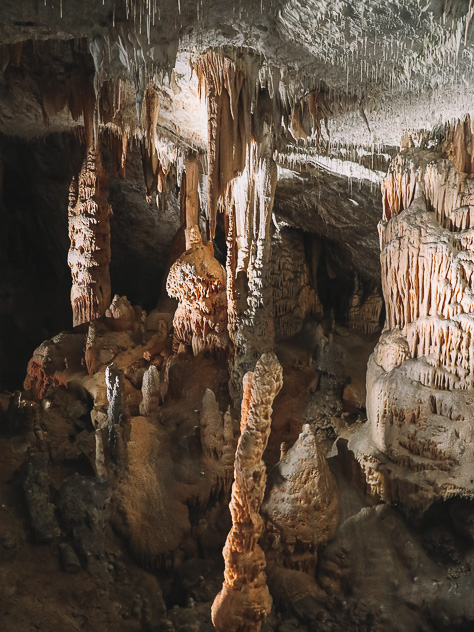 The downside? You have to maneuver through hoards of people once you get into the caves. The upside? The caves are very impressive, with massive stalagmites and stalactites, and even a large concert hall that can accommodate 10,000 people.

As if we hadn’t already done enough spelunking for a day, we decided to visit another cave system nearby: Skocjan. And we were so glad that we did, because this was the most impressive cave we have ever seen.

Though less about the formations, what was so amazing about Skocjan was the sheer depth of the cave, measuring over 60m in width and 140m in height. It felt out of this world. 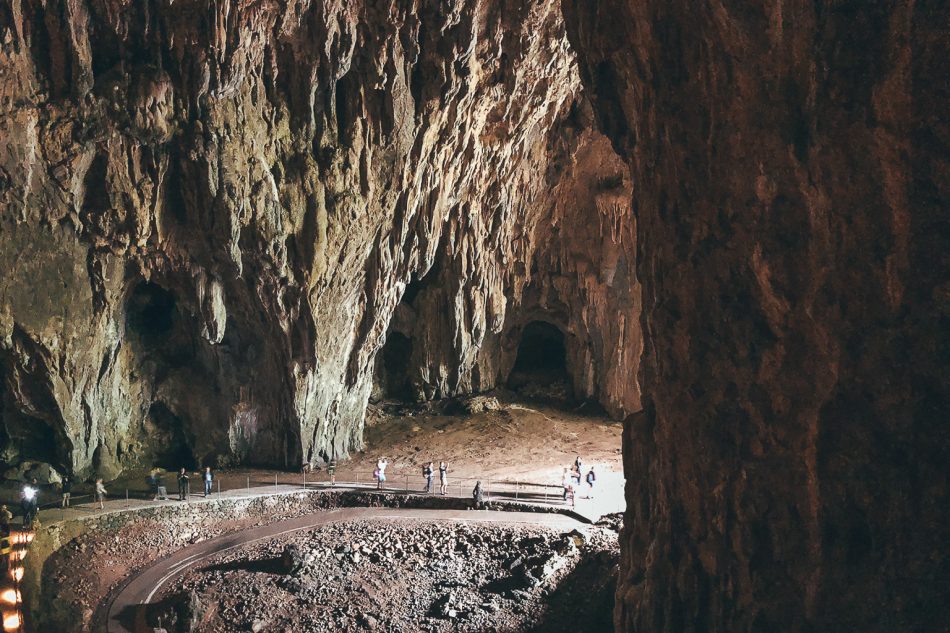 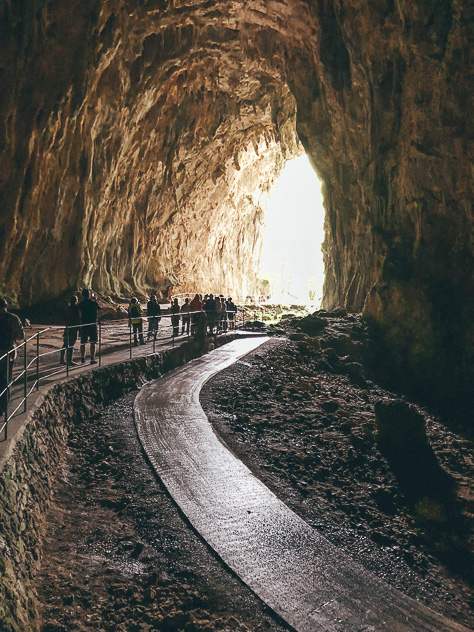 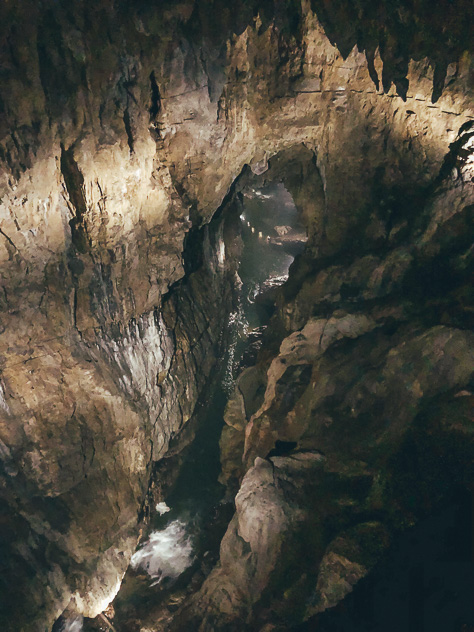 Our visit of the cave took us on a catwalk suspended 100 m in the air with the river roaring down below. The highlight was walking across a suspension bridge over the canyon, which looked straight out of a Lord of the Rings movie: 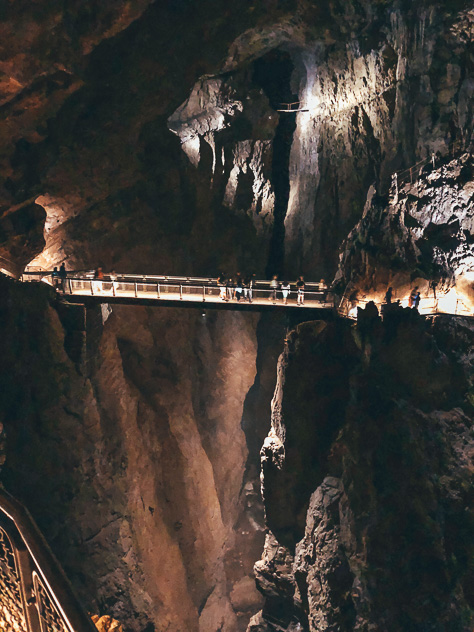 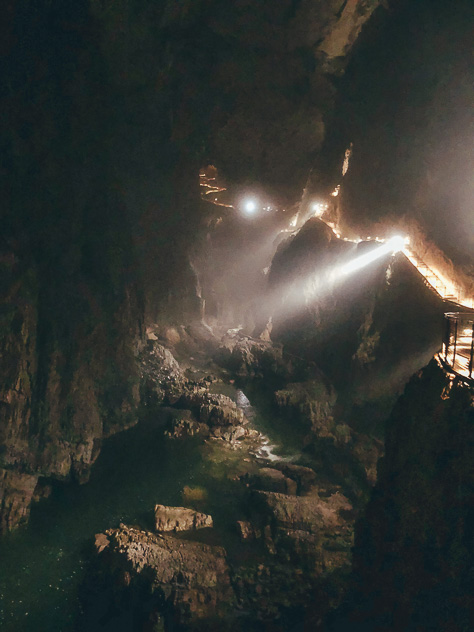 Why do we have to be so high up? The outlet of the cave is quite small so if a large amount of water enters the cave (rainfall or snow melt), the river can rise dramatically over a short period of time. This last occurred in 1996 and flooded a portion of the walkway. The rebuilt walkway is now much higher, hopefully avoiding similar issues in the future.

Now that it’s safer than ever, there is really no excuse to miss out on these caves. We doubt you’ve ever seen anything better!

If you were like us, we initially struggled to choose between visiting the Predjama Caves or Skocjan Caves. If you were unlike us, and did not decide to see both, here are some details about each to help you decide:

Predjama Caves: This cave system is impressive, and has many more formations (stalagmites, stalactities) than the Skocjan Caves. You walk through several different chambers of formations composed of various minerals, giving them slight variations in color. The area is very well developed with a nearby hotel and several restaurants. This, plus the train ride into the caves, makes it very kid friendly. The main downside is that they take huge groups of tours in at once, which we think took away from the experience. Adult ticket: 28 Euro (though a discounted price may be obtained in combination with a ticket to the Predjama Castle). Click here for more info.

Skocjan Caves: This cave system was the most dramatic, given its size, elevated walkway, and bridge over the river below. The area is much more natural as compared to Predjama, with a short nature walk into the caves rather than a train ride. The groups are significantly smaller as compared to Predjama, making it feel less touristy. Adult ticket: 16 Euro. Click here for more info.

Our favorite between the two? Skocjan Caves. Overall, we found these more impressive and enjoyed the more natural approach to showcasing the caves. However, both are amazing and worth a visit. To better enjoy Predjama, we would recommend taking the self-guided audio tour. You are let into the caves before the remaining tour groups and can walk through at your own pace, without being in a large group of people.

If you do choose to see both, these can be easily done together in one day if you so choose as the caves are only a 30 minute drive apart from one another.