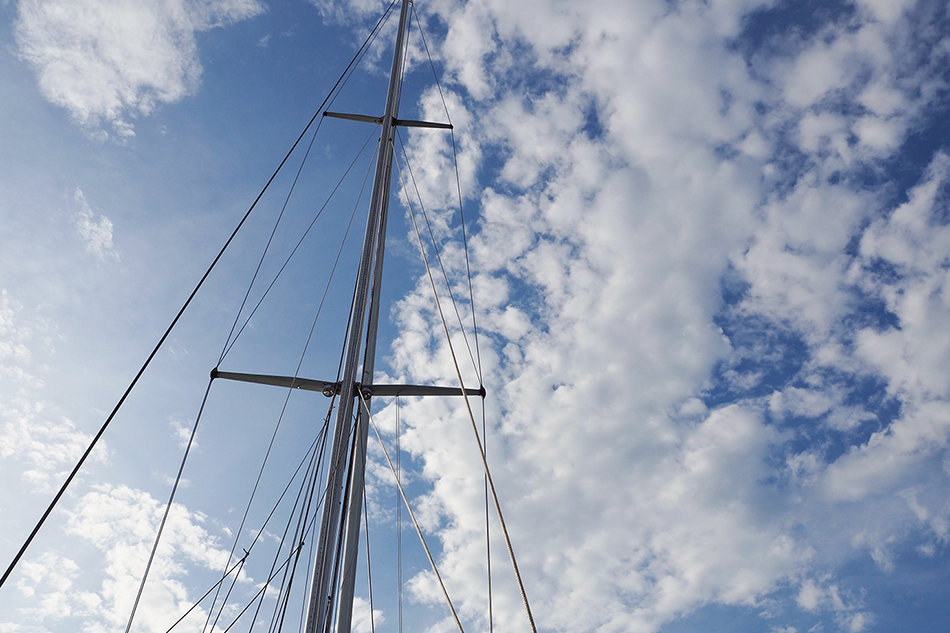 While everyone was flocking to Cannes for the annual film festival, we took the short 10 minute train ride from Nice with the plan of spending the day sailing!

We pushed through the crowds of people trying to catch a glimpse of celebrities, and detoured around the numerous white tents set up for the festival. We just barely saw the red carpet, with the paparazzi snapping photos of Bill Murray as we walked by.

Relieved to be out of the chaos and finally on the dock, we found our boat and captain Pierre. He agreed to take us 12 friends aboard, accepting our arms full of rosé, gin, and whisky. 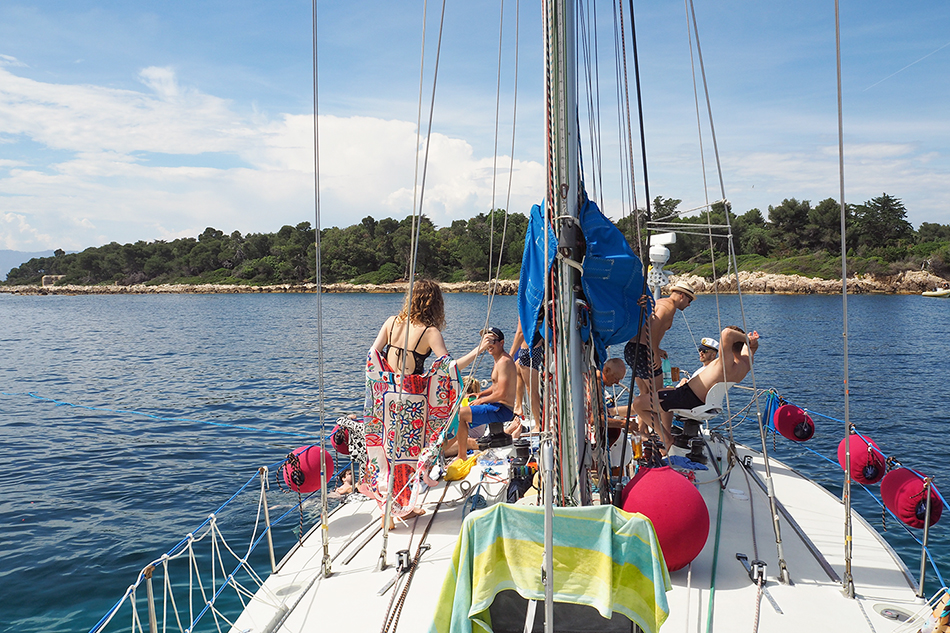 As we set off aboard, we watched Pierre and his second hand man opening the sails of our boat. It wasn’t long before we were all put to work, appreciating the handling required for such a vessel. 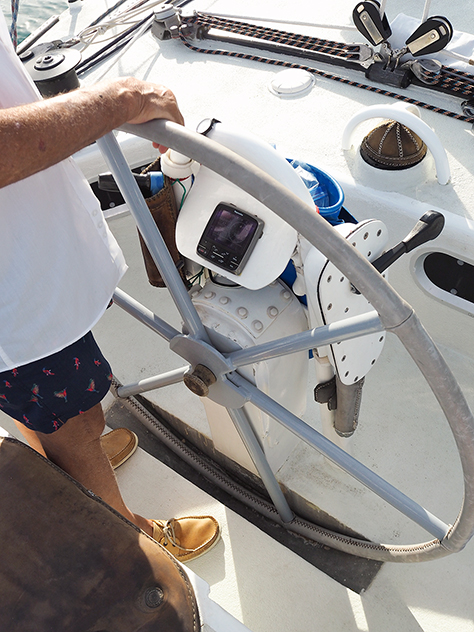 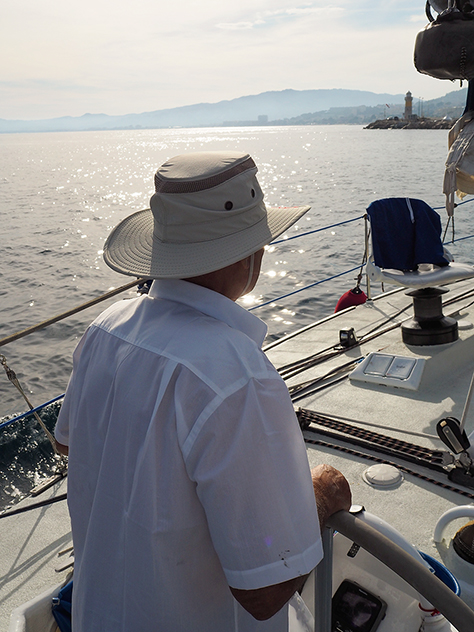 As our sail caught wind, our boat tilted to the point that the deck was almost under water. We all ran to the opposite side of the boat and found ourselves laughing while trying to hang on. Pierre, on the otherhand, calmly navigated us out to sea. 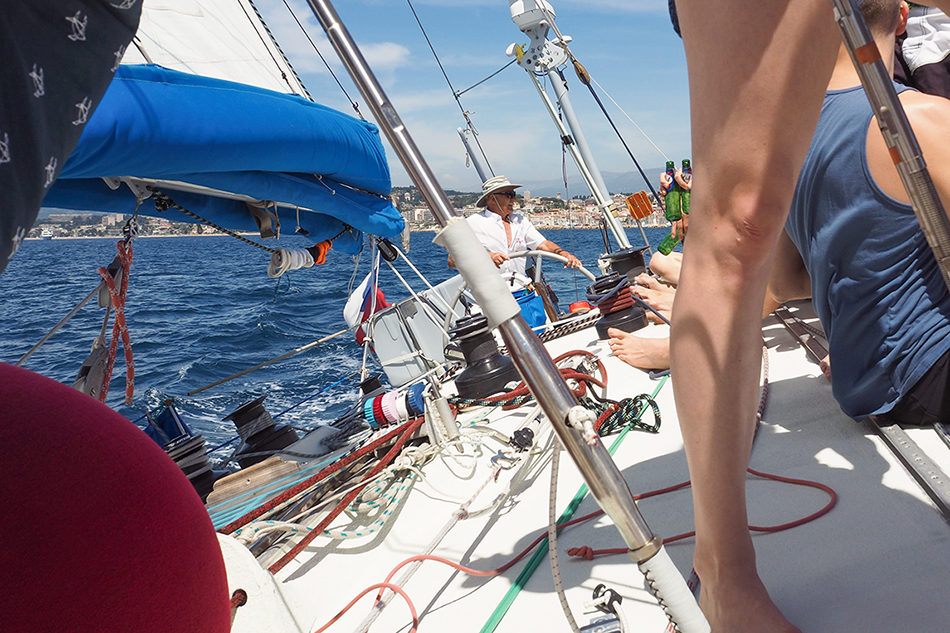 Pierre eventually settled us in a calm bay where, given the lovely weather, it didn’t take long before the first people jumped into the clear blue (but cold!) water. Pierre had a few surprises up his sleeve, pulling out a paddle board and a rope to tow us behind the boat. Eventually, a couple of hammocks even magically appeared at the front of the boat. 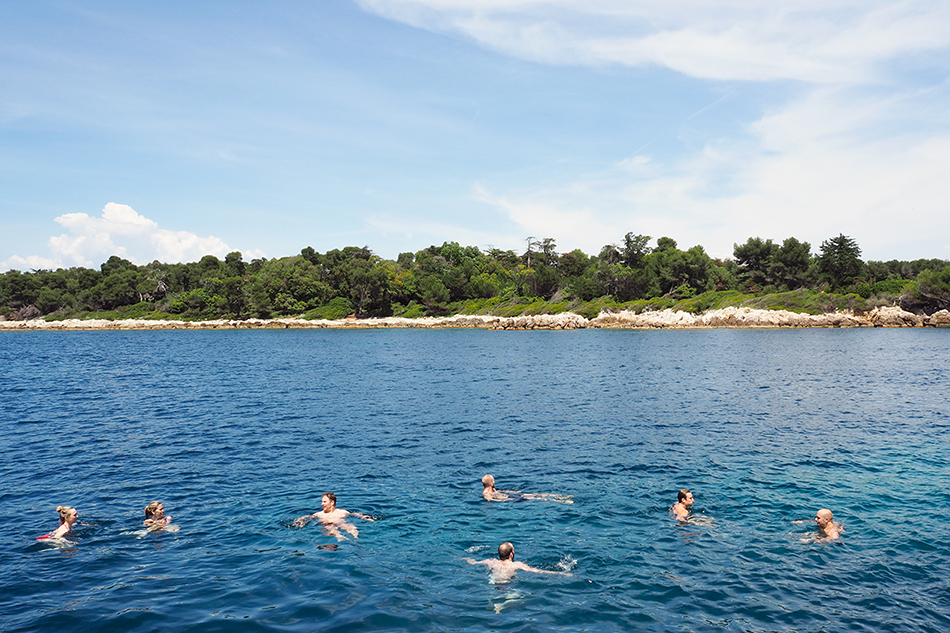 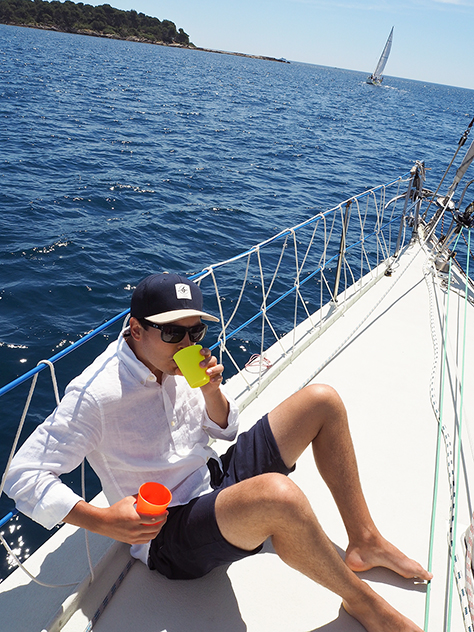 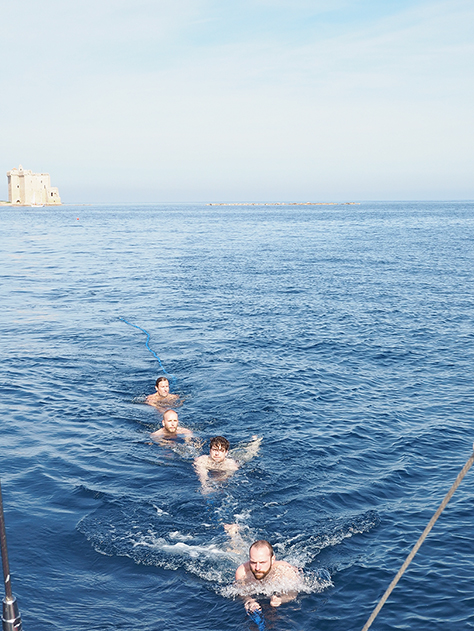 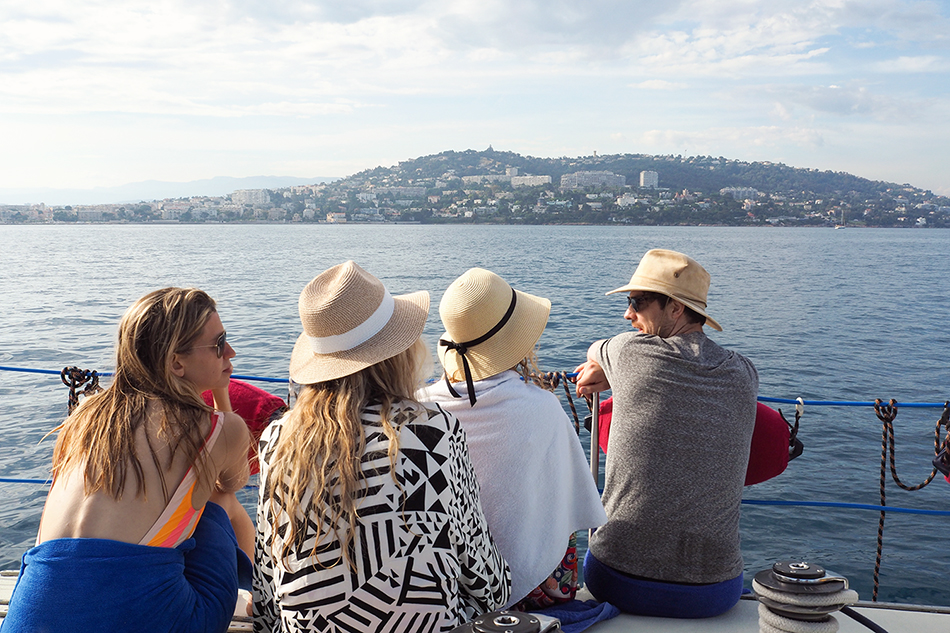 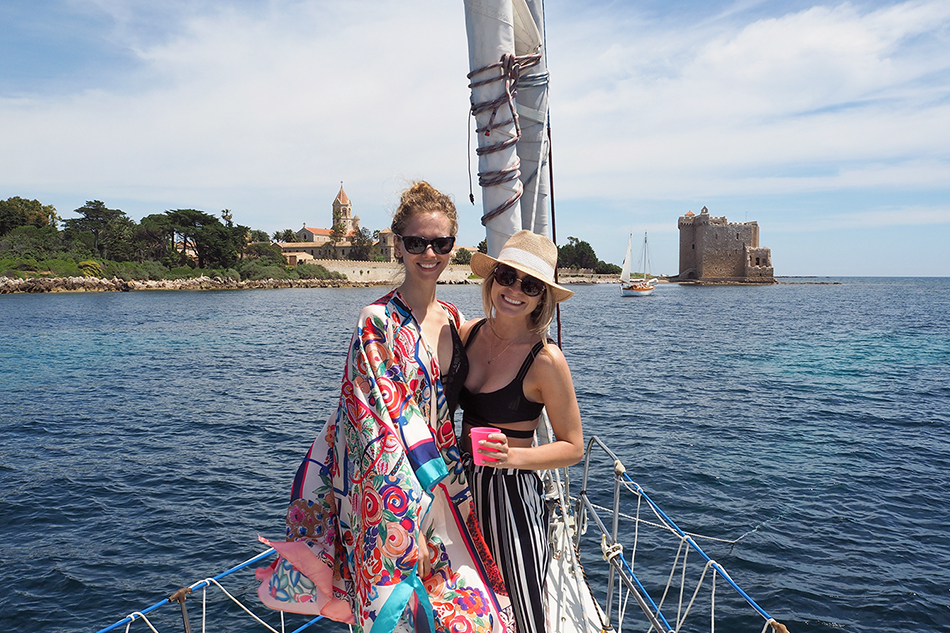 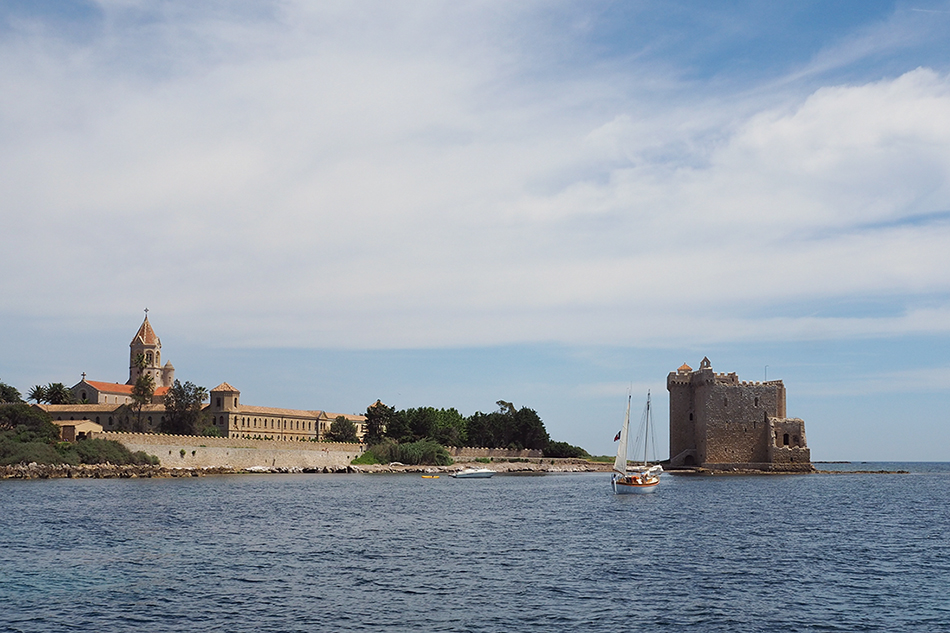 Lunch was another nice suprise, with fresh food and a huge loaf of delicious homemade bread (baked right on the boat!). 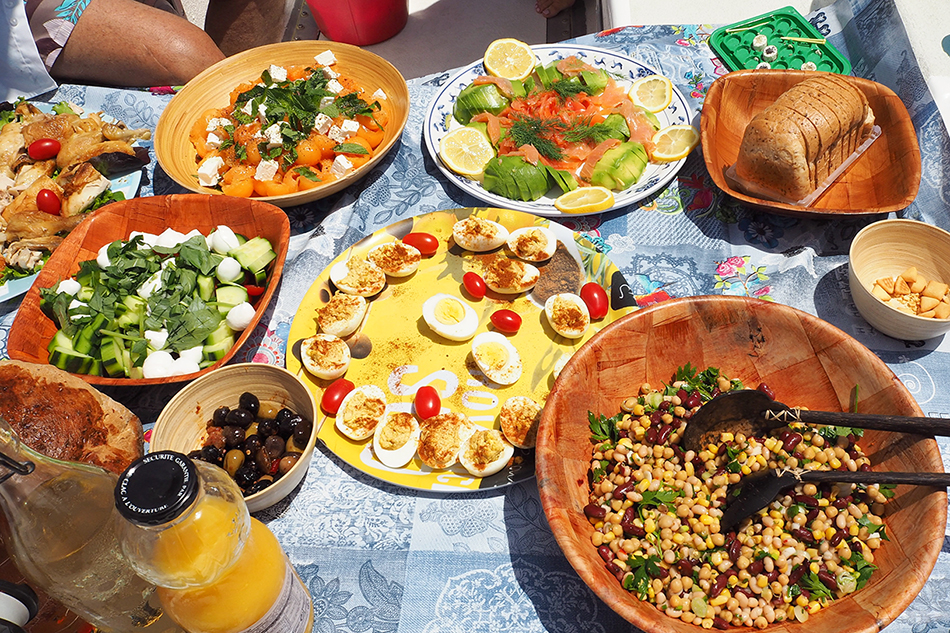 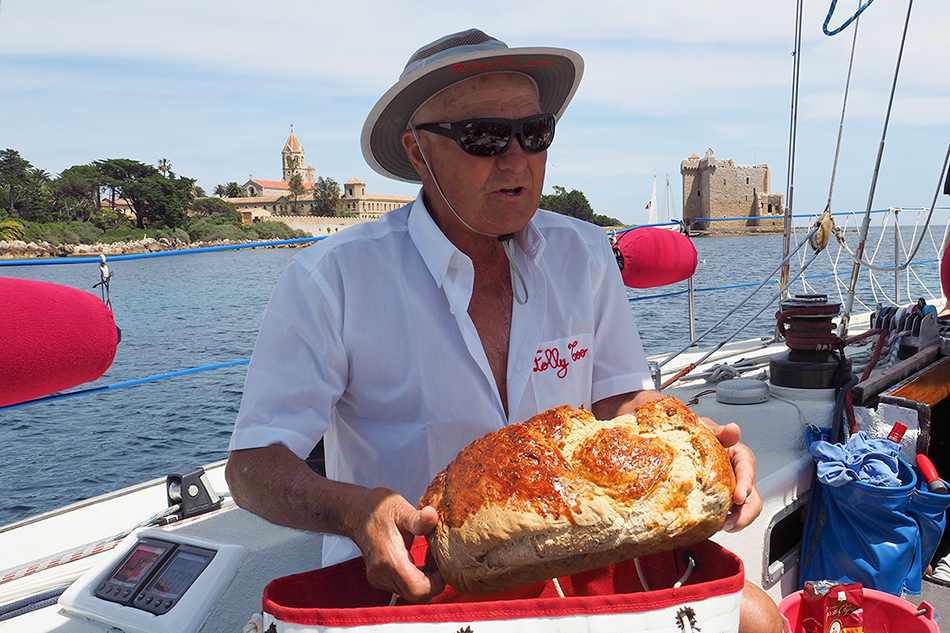 We thought our sailing boat was pretty fancy, until we sailed by this fancy boat. This is the largest sailing superyacht in the world, worth $450 million CAD. The boat is taller than London’s Big Ben, and longer than two Boeing 747 planes put together. It costs over $3 million CAD in maintenance and staffing per year. 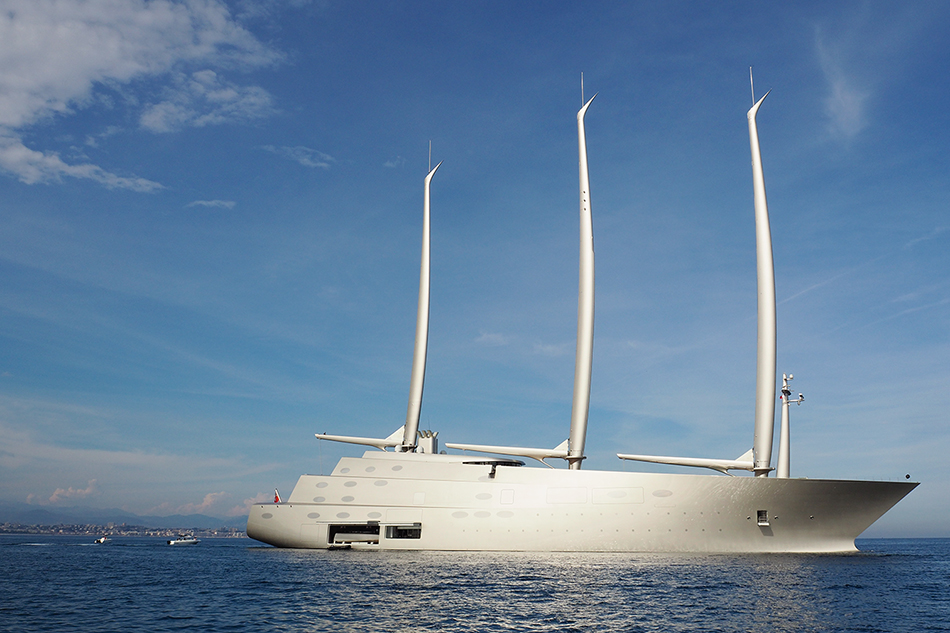 The boat houses a helicopter and several smaller boats within it. The masts are the tallest and strongest free-standing composite structures in the world (large enough that there is an actual room within the middle mast). Oh ya, and the whole boat is bomb proof. Leave it to the French Riviera to put you in your place – this area is a whole new world of fancy!

To get a sense of how large it is, look closely and you can see a man (black dot) on the leftmost sail.

After eyeing this yacht up close, we headed back to harbor. Spending our whole day on the boat, we were pretty tuckered out by a day of fun in the sun!

The sailing company we went with was Folly Too. Information about the cruise and different itineraries can be found on their website. We did a simple single 7-hour trip from the Cannes harbor. However, there are many other options available, including trips from Monaco, Corsica, Greece, Turkey, Croatia, etc. Trips can be anywhere from one day to one week.