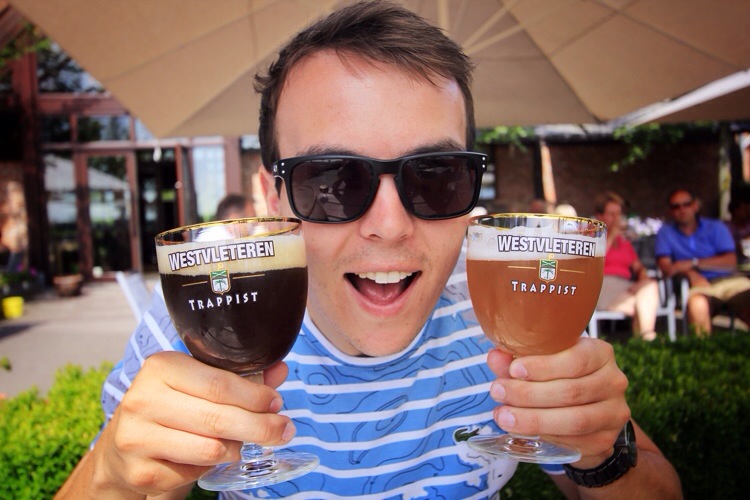 This beer is a great introduction to the world of Belgian brews. Brewed in the Trappist Abbey of Westmalle, this ale has many of the features of Belgian beer without being too strong in flavor or alcohol content. This beer also has the reputation of being the first tripel ever produced. It smells of hops but then has a complex spicy taste that is typical of Belgian trappist beers. If you try one Belgian beer, this is the one to try.

The reputation of this brewery precedes itself. Consistently rated as one of, if not, the best brewery in the world, a stop off at this brewery is a must. It’s a little bit out of the way but the beer is divine. For those who love their beer strong, jump straight to the Westvleteren XII which packs a strong 10% alcohol content. You would never guess the strength of the beer by taste though as it is smooth and tastes like a dark caramel. For those who like something a little lighter on the palate the Blonde is a great alternative.

This brewery puts all of its attention into one beer known simply as “Orval”. Their ongoing commitment to perfecting this one beer shines when you open the bottle and smell the aromatic hops. Don’t let this fool you though as it tastes more of yeast and citrus. Pick up a bottle if you can find one.

This beer is distinctly recognizable by the cute little gnome adorning the label. Technically it is a blonde ale and definitely one of the better ones. If you close your eyes and drink it you could fool yourself into thinking you are actually having banana bread with a little spice kick.

If for no other reason, you should drink this beer solely for the glass it comes in. Legend has it that the beer is named after the noise the beer makes when it “kwaks” out of the bottom bulb of the glass (actually it’s named after the original brewer Pauwel Kwak). It has a strong malt flavor that is nothing special but you will definitely turn heads and make others jealous with this order.

Another of the true trappist beers in Belgium, this beer is brewed exclusively to support the monastery and all of the water for the beer is drawn from a well inside the monastery walls. They brew three varieties, but look for the blue cap if you want their shining jewel (classified as a quadrupel). This beer is very complex and tastes of dark dried fruits.

The jolly monk on the front of this beer has become one of the poster boys for Belgian beer. The blue label of the abt 12 lets you know you are in for a beer that packs a 10% ABV punch. This beer manages to be very well balanced however with sweetness from malt and a bitter hoppy finish. It is such a staple that no Belgian beer experience would be complete without it.

This beer holds a special place in my heart as it is named after the golden dragon at the top of the Belfry in our favorite Belgian town of Ghent! The dark ale people out there will quickly fall in love with this beer (technically it’s a barley wine). Gulden Draak can easily take the place of a meal with how heavy it is; by the time you’re done you will feel like you have had coffee, steak, and dark chocolate for dessert.

One of the pioneers of the stubby bottle Duvel (or devil) is a lighter Belgian beer more suitable for serving cold on a hot day. It is lighter on the palate and not as heavy as some of the darker ales (although it still packs the strong alcohol punch typical of Belgian beers). Interestingly enough it also brews a few beers under American labels, I’ll leave the detective work up to you…

I am pretty sure the mascot of this beer spawned the pink elephant shirt hipster revolution. Known throughout the world and named after a condition caused by alcohol withdrawl this is the perfect beer to round out a top 10. Beware of how much you drink as it goes down very easy.

While more of a sour drink than a beer, I have to mention this in the countdown. It is definitely a taste experience. The unique brewing methods of this beer are specific only to the Brussels area. It has been expanded to a larger group of beers that have taken on many different forms with the most popular being Kreik and fruit lambic. Wander your tastebuds on over for a little walk on the wild side.