A Weekend in Montreal

Sadly, this year has been too busy with school to be able to escape on any wild adventures, so we made do with the time we had and planned a friendsies trip over a long weekend in Montreal. The main focus of the trip was the Osheaga music festival; however, in our usual fashion, we did lots of exploring and much eating.

An interesting thing about Montreal is that there are many people who do not speak English. Which seemed surprising to me, as it almost made me feel like we had left Canada. A second thing I noted is that all their signs/labels are only in French… how come the rest of Canada has to have French AND English written on everything and they don’t? 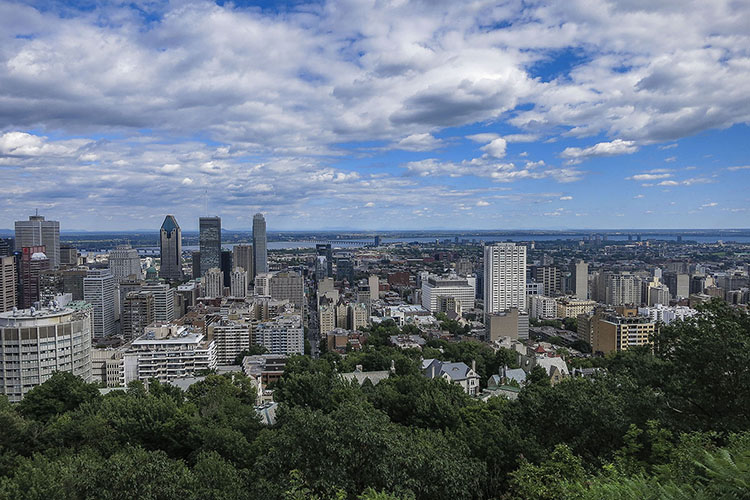 I could almost trick myself that I was in Europe.

Montreal’s old town is apparently is one of the oldest areas in North America, and you do truly feel like you’re somewhere in Europe as you walk down the cobblestone streets and see buildings like the Notre Dame: 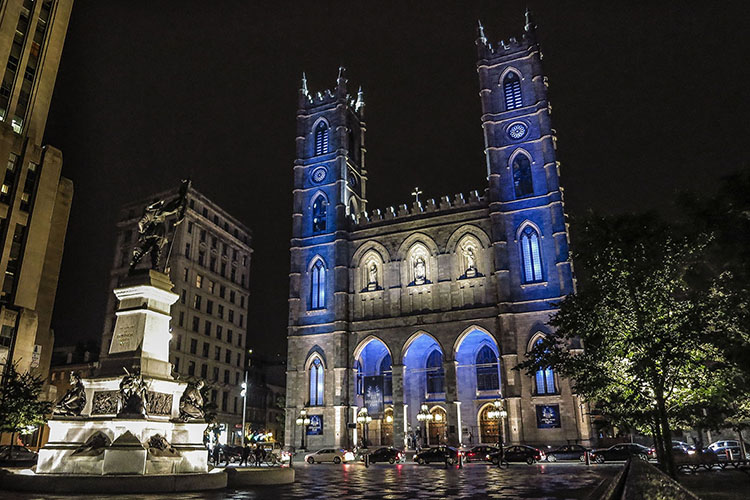 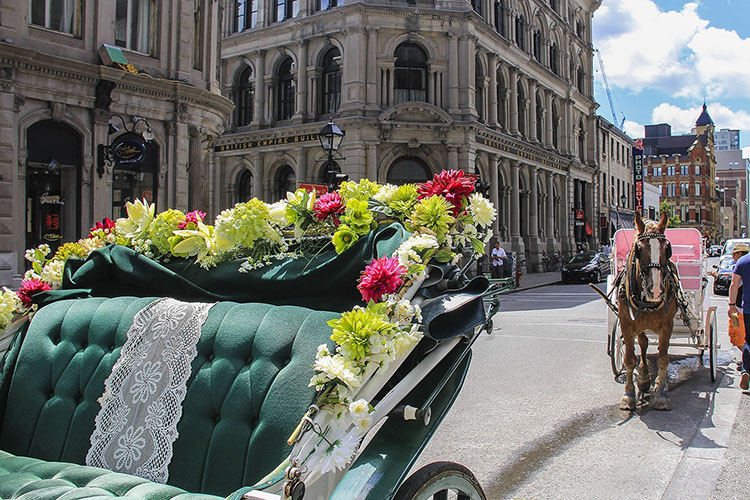 It’s nice to see areas in Canada with such history and character… it’s unfortunate that these places have to be as far away and as French-speaking as Montreal (not my strength, though maybe I should do as Shane does and just use my Italian pronunciation for all French words). Not to mention that it’s a “have-not” province… so every time I complimented a building, Andrew or Shane would be quick to remind me that we might as well own it. 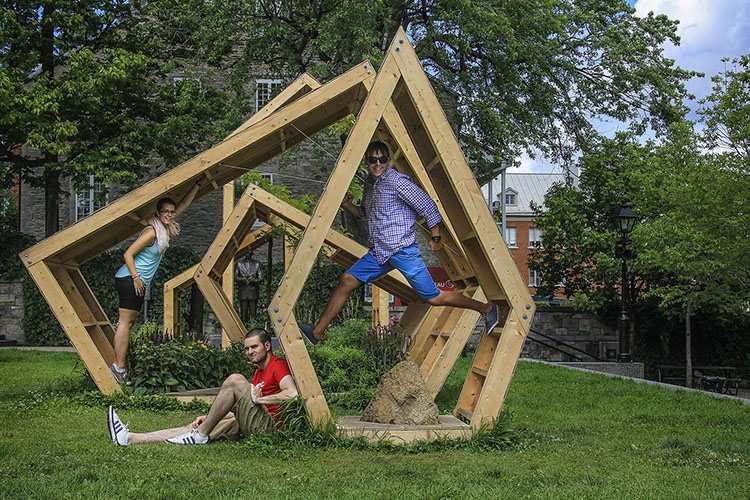 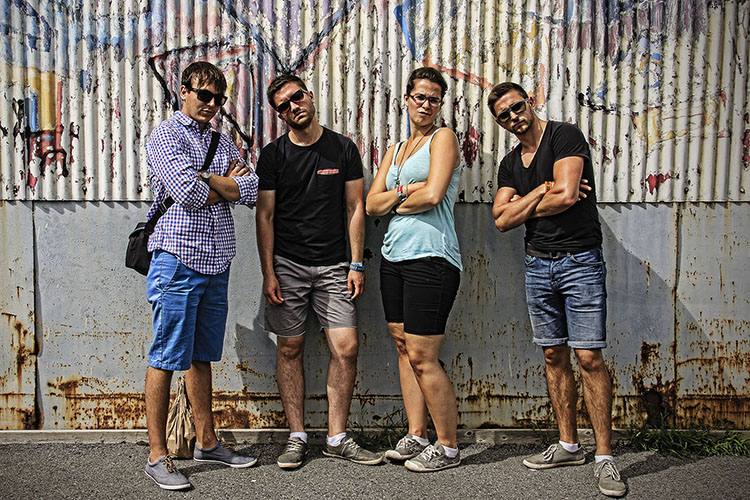 We dedicated one entire day to being secluded on an island with 5 music stages and bands playing back-to-back from 1 to 11 pm. We wandered from stage to stage, sometimes to listen to our favorites, and other times just to discover something new (like Robert DeLong, an electronic DJ who used a Wii remote on stage to add beats to his music). 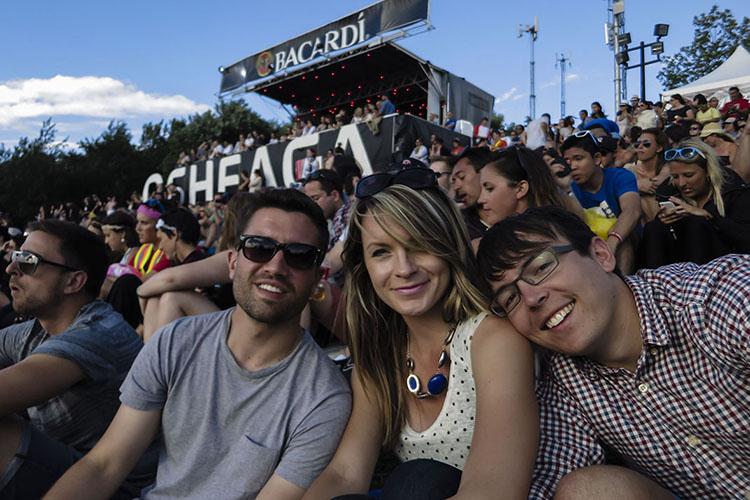 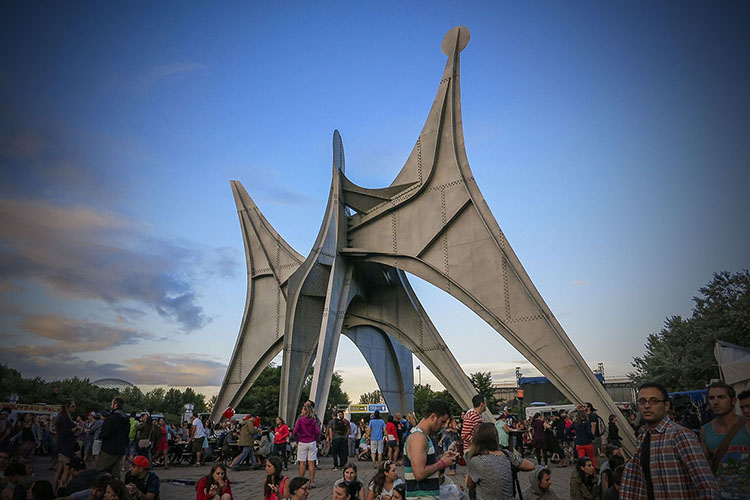 The highlight was the final headliner, Mumford & Sons, who put on a great show and got over 45 000 people standing up to sing and dance in the field as they played. 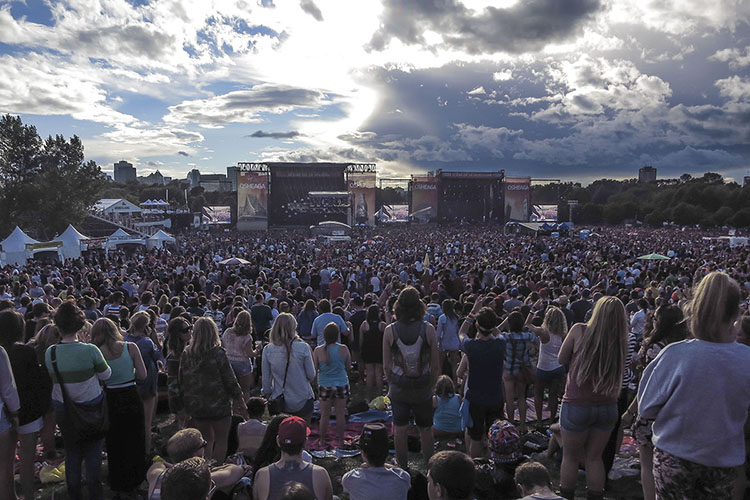 Of course, any time you have a crowd this size (apparently the festival saw over 135 000 people over the weekend) on an island with only one exit, you can imagine the mass chaos to get out. As everyone piled into the doors of the subway at the end of the night and we stood silently at a standstill, someone began singing Oasis’ “Wonderwall”, and eventually mass amounts of people joined in. Pretty cute. 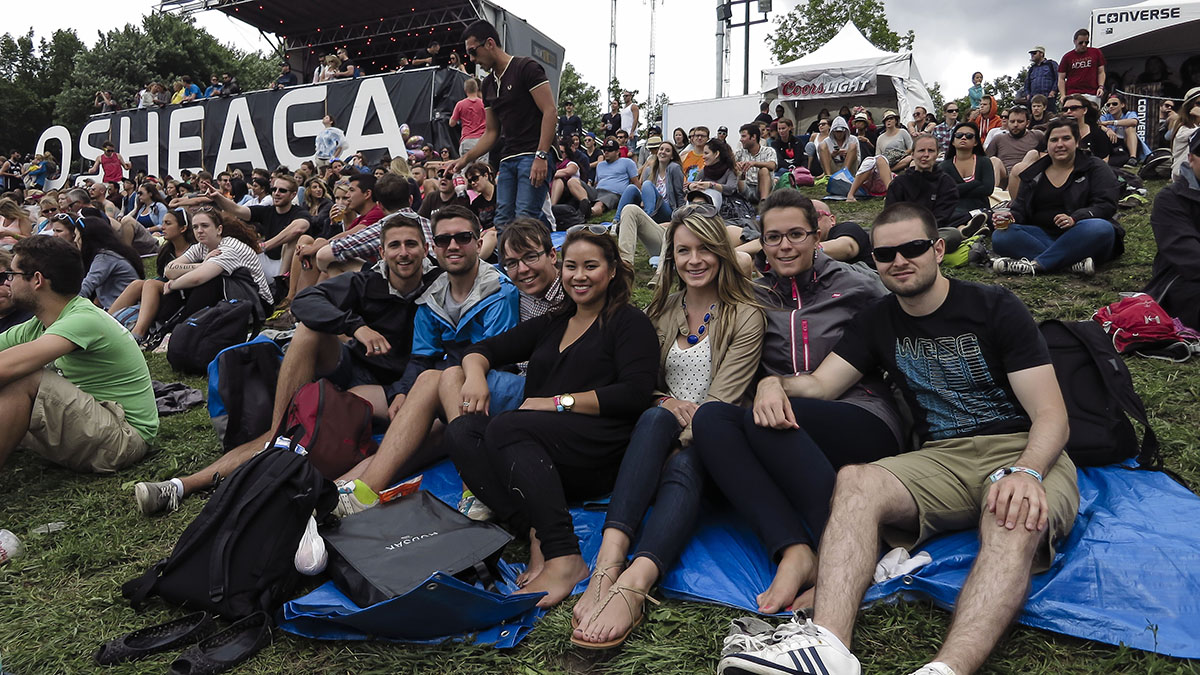 It somehow just worked out that every time we tried some classic Montreal foods, it was post 2 AM. Only at these hours can we apparently enjoy famous Montreal smoked meat and the plethora of poutine varieties from your classic cheese curd & gravy, to hotdog or even perogie variety. 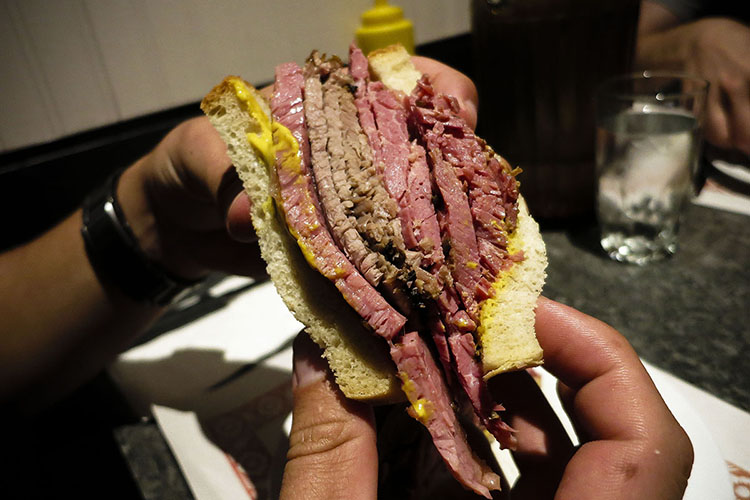 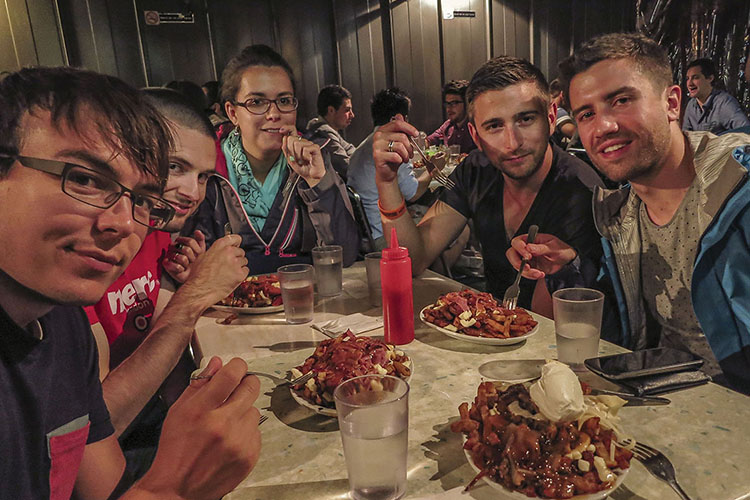 One of the main gems we discovered completely by chance was a sushi restaurant where we went only because it looked busy, full of locals, and we were starting to get h-angry. However, we soon found it to be an all-you-can-eat sushi restaurant, and somehow the entire menu of 100 delicious items was open for our ordering for only $14. I honestly thought it was all a fluke and we’d end up with a giant bill to pay after our multiple rounds of ordering exorbitant amounts of food (sushi, ramen noodles, ginger beef, and tempura by the bowlfuls)… however, it turned out to be just as good as it sounds.

I’m almost sad I went this many years in my life without knowing this exists. 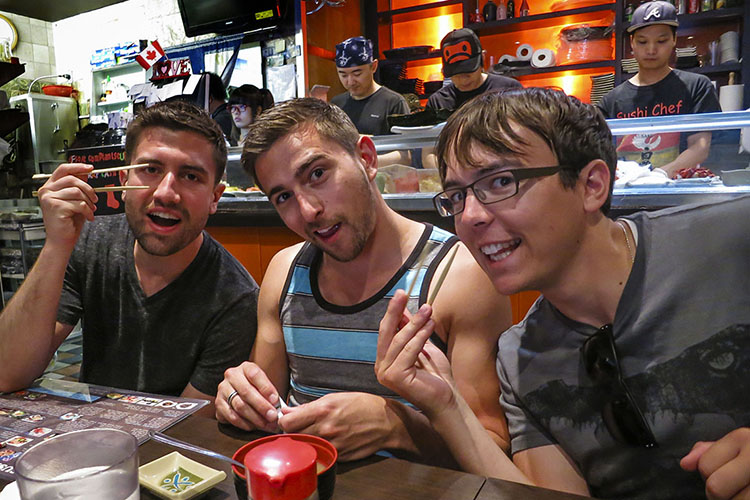 Somehow, despite its flatness, Montreal’s island has a random little pop-up mountain in the middle that goes by Mount Royal. We climbed this on our last day there, and enjoyed some pretty views of the city (as well the happenstance filming of a low budget rap music video…) 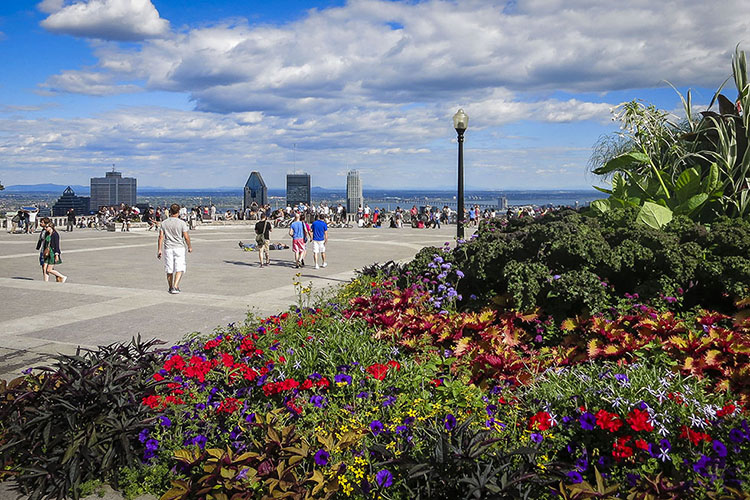 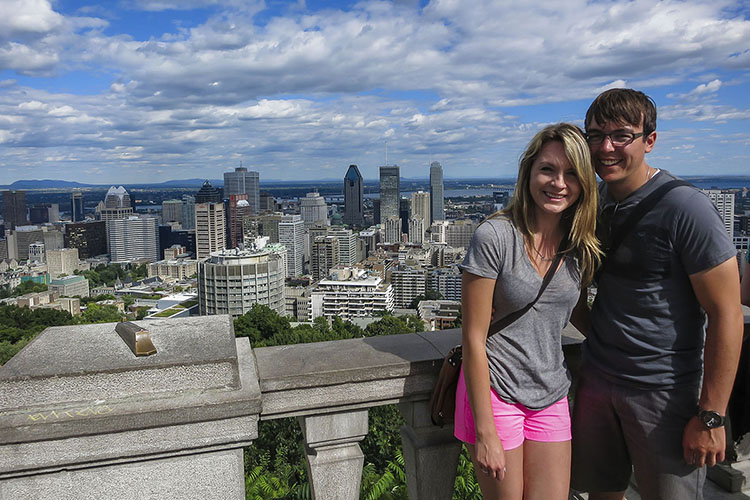 In the end, Montreal was a lot of fun. It’s a lively city, which makes it an enjoyable place to get away for the weekend. Not so easy for us in Alberta, but for many Ontario-ians I’ve spoken to recently, Montreal is a favorite vacation destination for those wanting a get-away close to home.

PS – The delicious spread our friends spoiled Shane and I with on our arrival in Montreal: 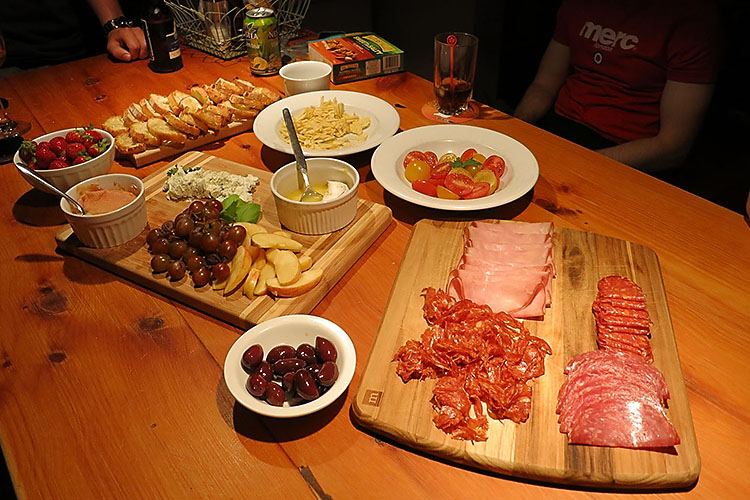