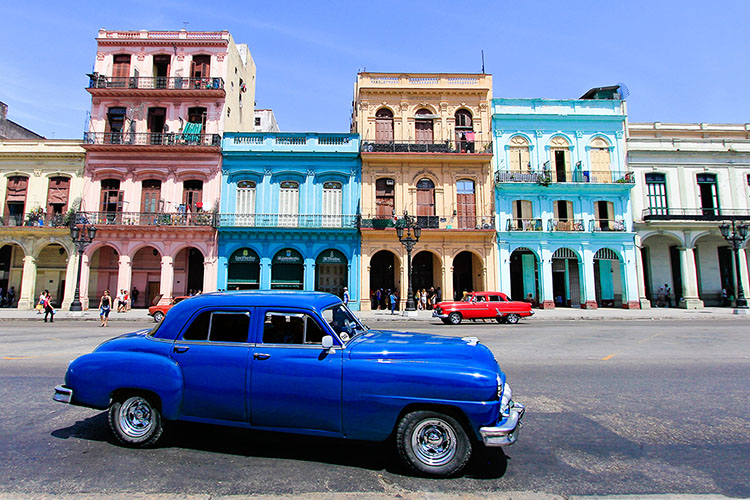 After a few relaxing days in the resort, we looked forward to getting out and seeing some of the “real” Cuba. We were both excited to see Old Havana and its antique American cars, colorful buildings, and lively atmosphere. 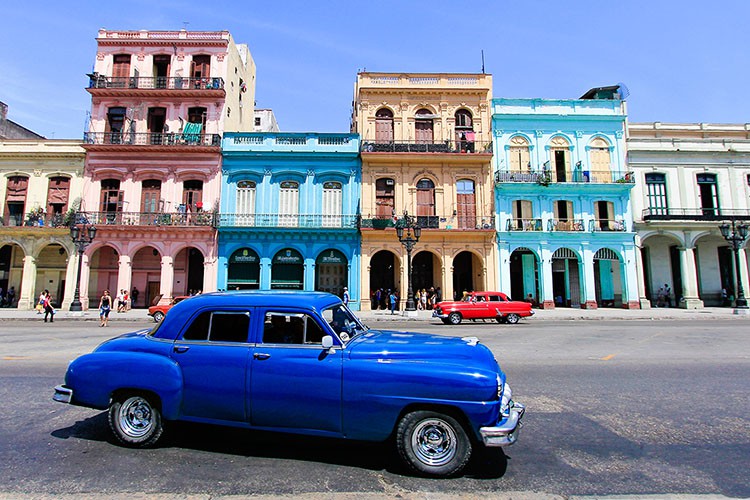 Entering Havana, you feel immediately thrown back in time. Vintage American cars dominate the European-style streets. The city is like a car museum, full of vehicles manufactured before the 1960s, after which the US declared a trade embargo forbiding newer imports. 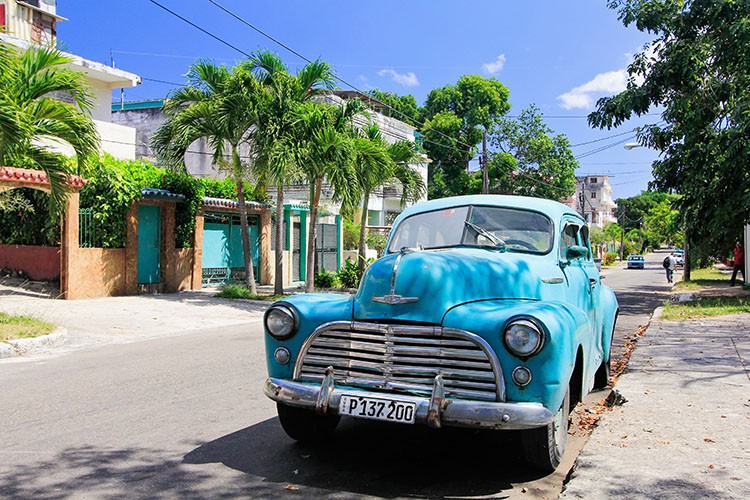 Since then, Cubans have found ways to keep these cars running and repair them as needed. Since they cannot get parts from the US, some of the cars are remade with diesel engines from places like Japan or Russia.

Hailing our first taxi in Havana we were picked up in this funky convertible Chevrolet. We learned from the driver that the car has been in his family since 1951 and passed down through three generations. There was something enjoyable about cruising top-down along Havana’s sea drive in the sunshine. 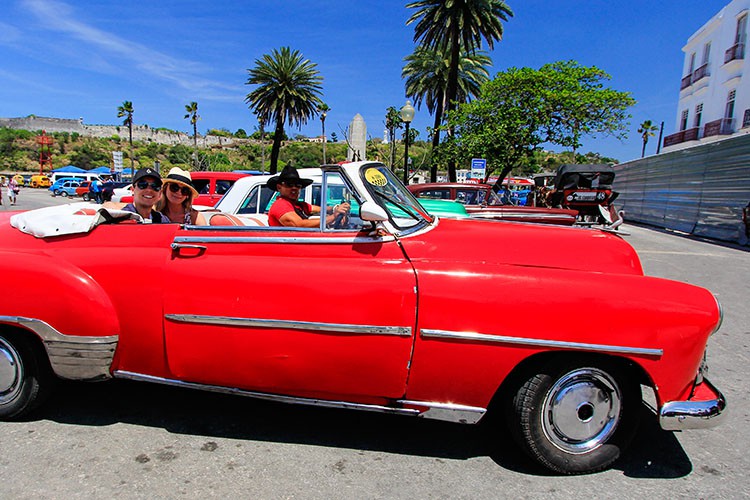 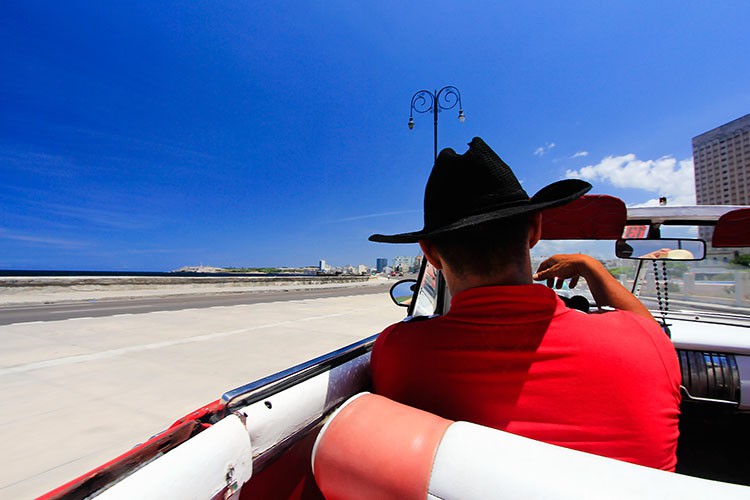 Before the Communist revolution, Havana was the Las Vegas of the south and the vacation destination for the whole Caribbean. The city was full of luxury hotels, nightclubs, and casinos and attracted celebrities from all over the world. Its beauty at the time was said to rival that of Paris. 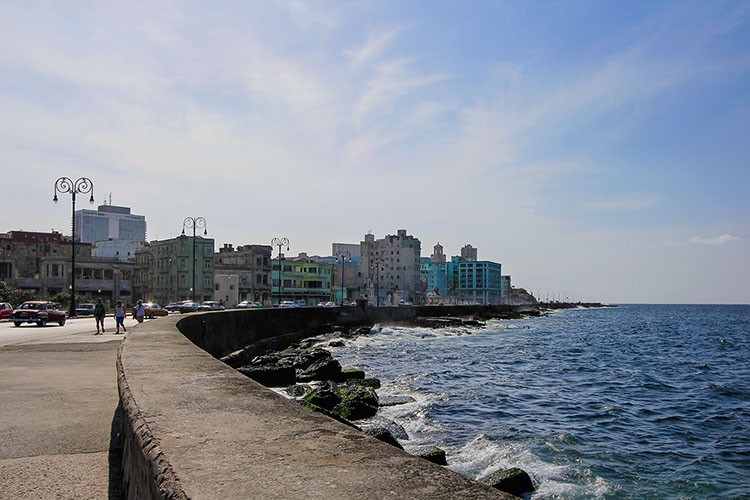 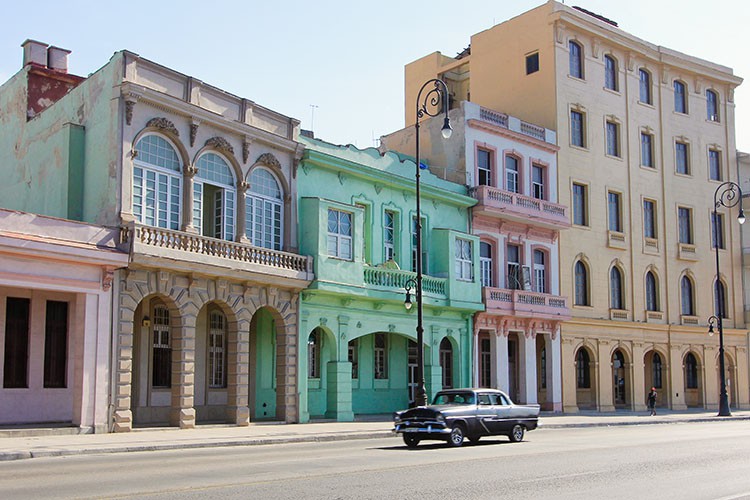 The Malecón is the 8-km sea drive along Havana’s coast that was once a part of this entertainment infrastructure. Unfortunately, much like Havana’s above described reputation, the Malecón is now struggling to keep up its original image. Today it battles massive waves of salt-water that crash over the sea wall’s edge. This leaves many buildings along the drive decrepit and crumbling apart. 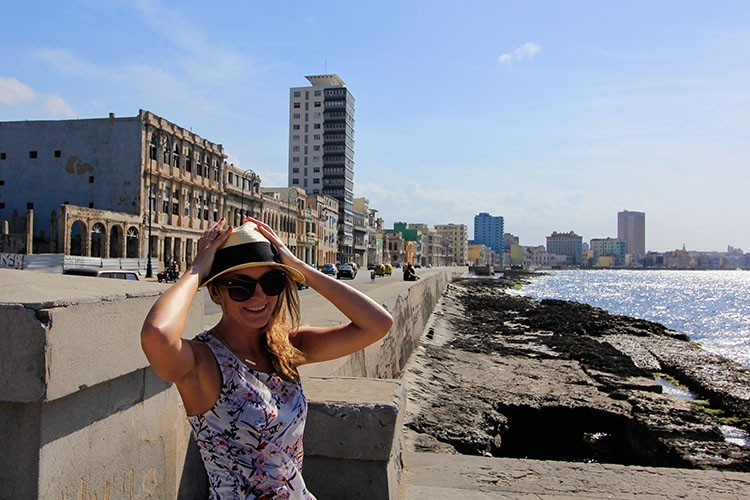 Visible from the Malecón is the Fortaleza de San Carlos de la Cabana, an almost kilometer long fortress built in the 1700s to protect the city from invasion:

After Fidel Castro overthrew the American-backed government and enacted Communism, the lively reputation of Havana changed. All private properties became state owned and the US halted trade. This hit the country hard and complicating matters, the collapse of the Soviet Union meant Cuba lost much aid money and ended up with strict rationing on food and consumer goods.

This became apparent to us while we struggled to find a supermarket, which were few and far between. Finally stumbling upon one, we waited in line to enter and had to drop our backpacks off at the front. We then wandered through aisles of the same items, no variety or choice, and in limited supply. On the way out, our bags were checked to ensure we took only what we had purchased. 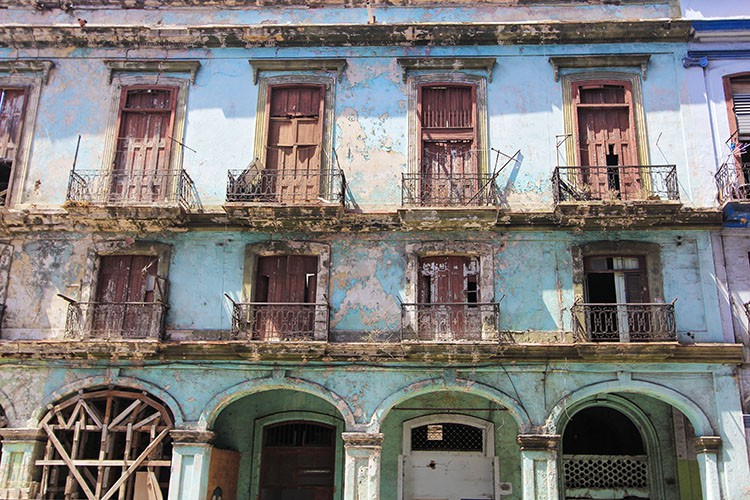 We soon learned that most of the Havana population lives in poverty, with shortages of simple items like soap and cooking oil. Most people make $10 USD per month, with a “maximum wage” (rather than a minimum) of $20 USD. This quickly made us feel ashamed of our gluttony at the resort in Varadero. Foods that we were eating daily, like cheese, can only be accessed by many Cubans on a black market.

Unfortunately the effects of poverty don’t stop there. The initially colorful buildings in Old Havana crumble and fade as you leave the main streets. The city almost feels like a war-torn or hurricane-swept town that has fallen in disrepair. Vines have overgrown the scaffolding as evidence of years of stagnant construction. 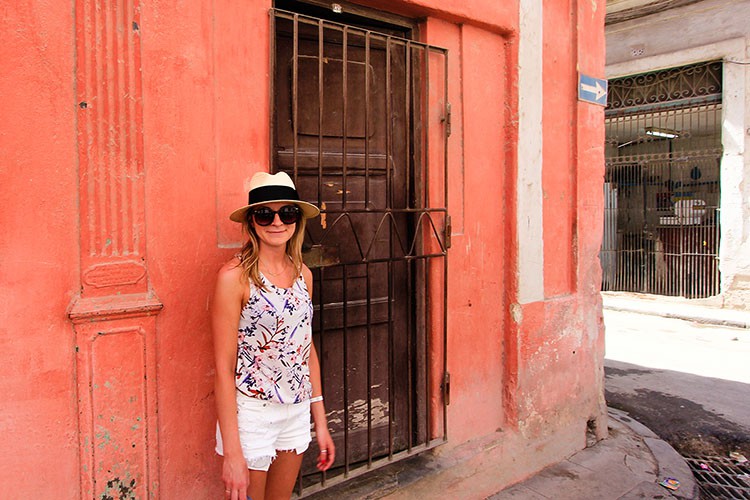 Havana is full of revolutionary graffiti and icons of Che Guevera. Him and Fidel Castro were responsible for bringing revolution to Cuba and creating the western hemisphere’s first Communist state. 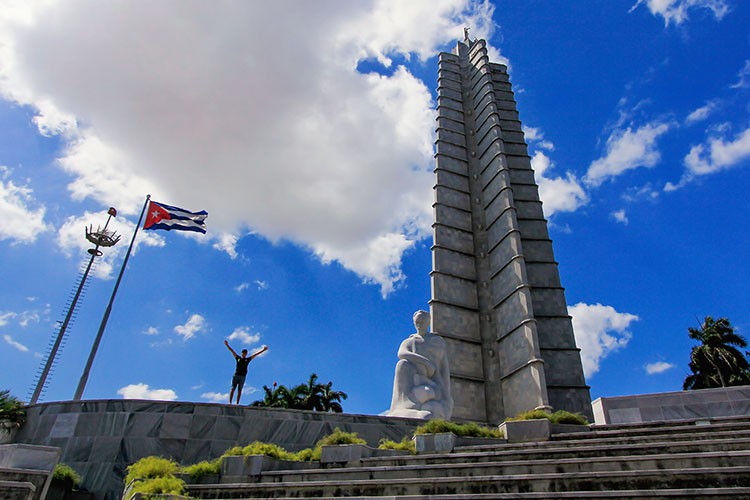 One of the main landmarks representing these characters is the Plaza de la Revolucion, a massive concrete square that houses government buildings and hosts political rallies. 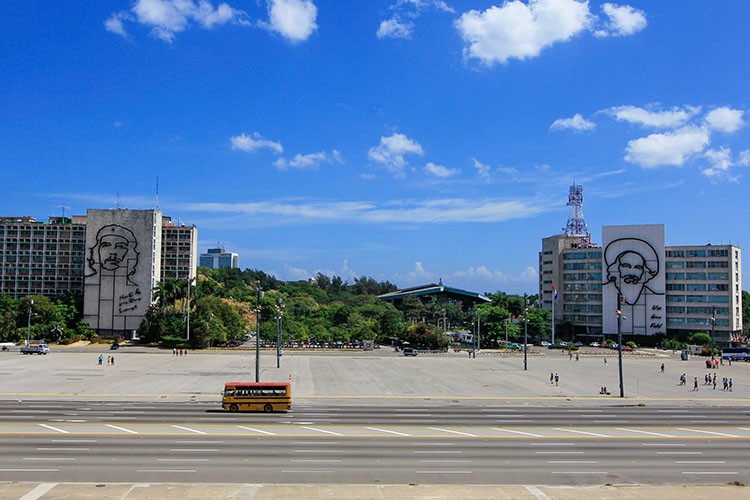 Surrounding the square are two giant steel face sketches of Che Guevere and Fidel Castro (or maybe – according to Shane – Jesus/Moses, it was hard to tell…). The words below read “Hasta la Victoria Siempre (Always Toward Victory)” and “Vas Bien Fidel (You’re going well, Fidel)”. Just a nice little reminder for the people. 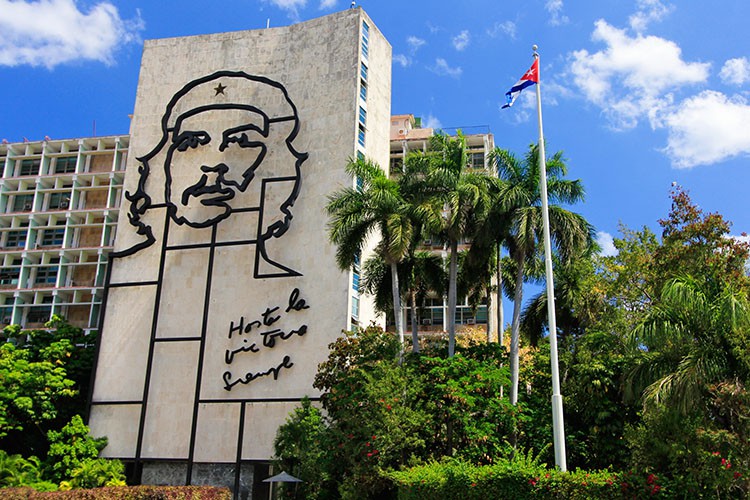 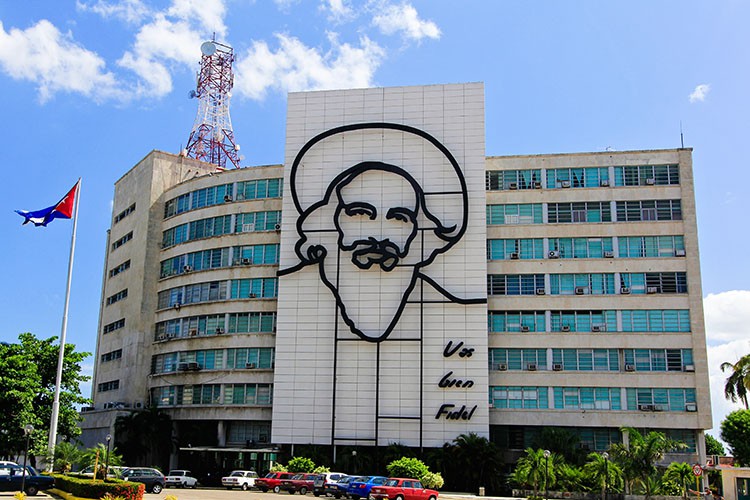 All-in-all, Havana is not the conventional beauty of a city that we perhaps expected, or that it might have once been. However, we can’t argue that it is not authentic and not without its charms of stylish cars and lively crowds. The wear of decades of Communism are apparent, but the people remain positive and resilient. Overall, Havana is a city that can’t be missed, and one open to your own interpretation…