After reading multiple things about Lima I don’t think either of us truly knew what to expect. We knew it was somewhere between safe and dangerous, beautiful and ugly, run-down and restored. Opinions varied. So we went into it with an open mind and were surprised with how much we enjoyed our stay. 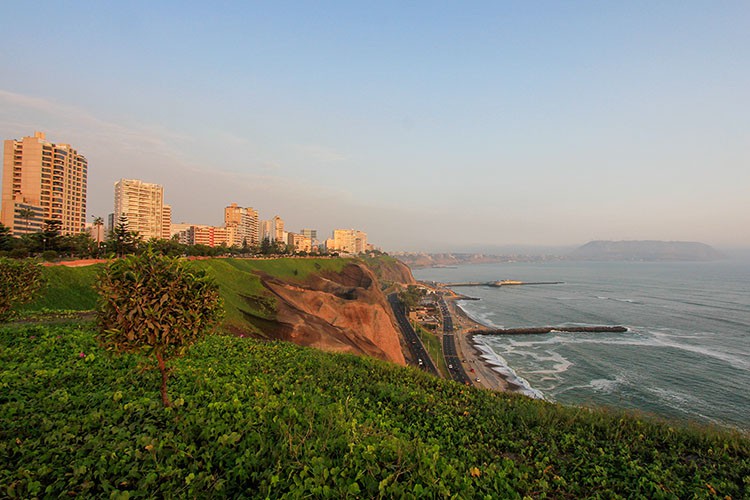 The city, once wealthy and rich, has since brought much poverty. People flocked to Lima from the highlands with the hopes of wealth and a better life, but instead found a city unable to support such influx. Thus there are miles of slums outside Lima and poverty remains a major issue. This leads to some of the safety concerns for tourists, as theft and pickpocketing are common. So, we kept our awareness up and went exploring, amazed by the beautiful sites among the chaos of this city.

At the time of writing this, the most warned about aspect of travel in Peru is regarding the arrival from the airport in Lima. Unofficial taxis are known for theft and much worse. There are stories of drivers stopping at a red light and having someone break your window and grab the bag off your lap. Or if he opens the trunk, they make a run with your luggage. Even worse is that you are taken away from your destination and robbed or kidnapped.

Thankfully the government has been trying to fix this, and official taxis can be purchased within the airport arrivals area before you even step outside into the chaos. Tourist Police monitor the main highway into Lima. And as visitors, we tried to do our part by keeping our bags down at our feet, out of sight, and avoiding flashing anything fancy. 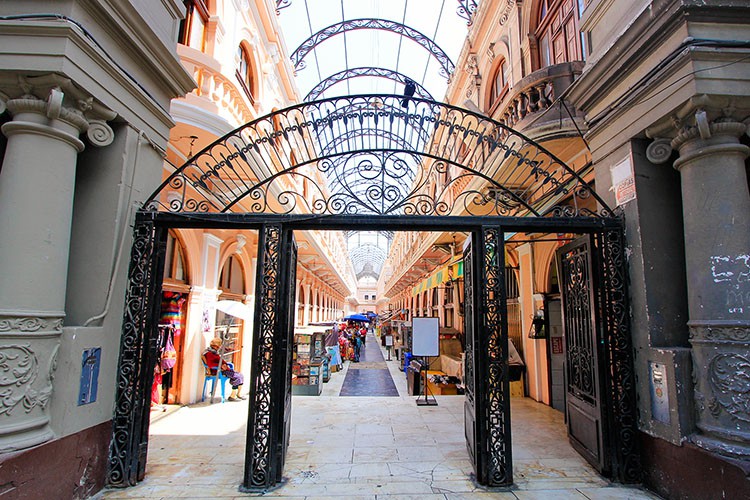 What was more noticeable to us on our drive was how insane traffic in Lima is. Lanes and red lights are suggestions, and pedestrians are an afterthought. Cars rush to push in between one another and use any lane or shoulder to get ahead. Honking becomes standard background noise.

As a result, Lima has the highest number of traffic accidents per person in the Americas. Traffic is out of hand mostly due to corrupted police, who can be bought out when giving tickets.

The government’s newest solution to this problem: hiring women traffic cops. Apparently “women are harder to bribe”. So now, in combination with lights turning red, a lady cop comes out onto the road with her whistle and attempts to control the rebellious traffic trying to go through.

The historical center of Lima is fairly stunning. It dates back to the 1500s when the Spanish needed a capital city in South America where they could center their wealth. The riches from the Spanish colonies flooded the city with wealth and spurred massive growth and impressive buildings leading it to be called the “City of Kings”. 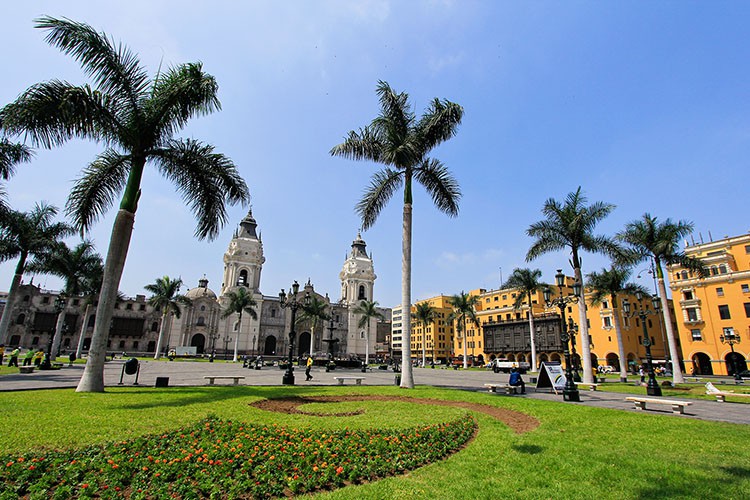 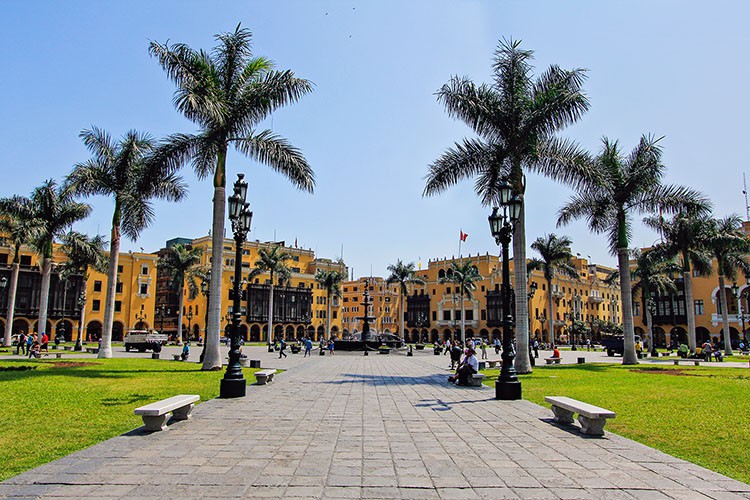 The historical center has two main squares, Plaza Major (the yellow one) and Plaza St Martin (with the statue in the center). 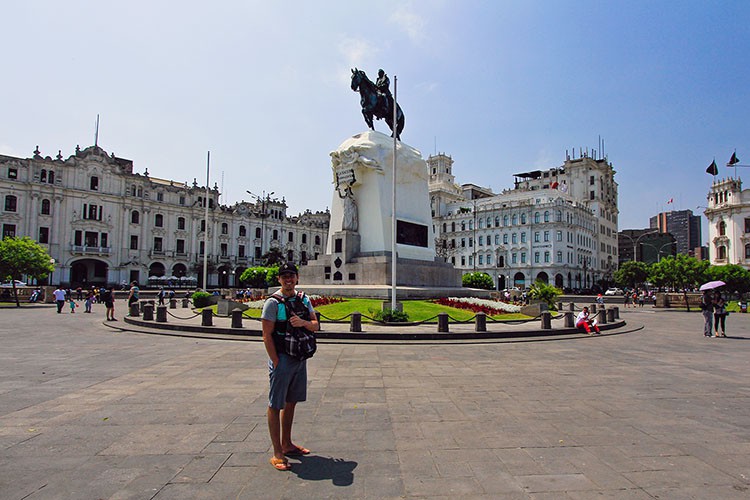 We toured the Monastery of San Francisco which houses century-old catacombs with thousands of tombs and bones. Bodies would be buried below the church and covered in lime juice and sand to prevent decay. We saw the open boneyards which stretch up to 15m deep full of skulls and leg bones. This one church of San Francisco holds 25 000 bodies.

Leaving the church there was a serious e-bird-gency outside: 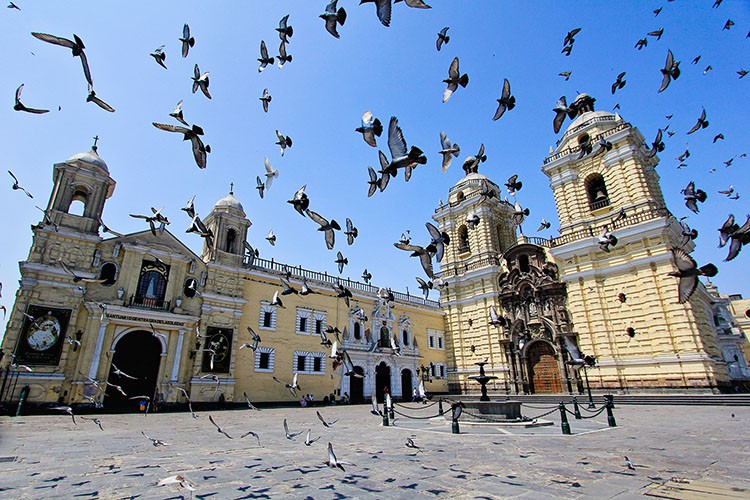 Miraflores is one of the fancier and wealthier districts in Lima, and therefore a recommended place to stay as it’s quite safe. The neighbourhood is very nice, sitting on a cliff overlooking the ocean with a sea wall walkway. 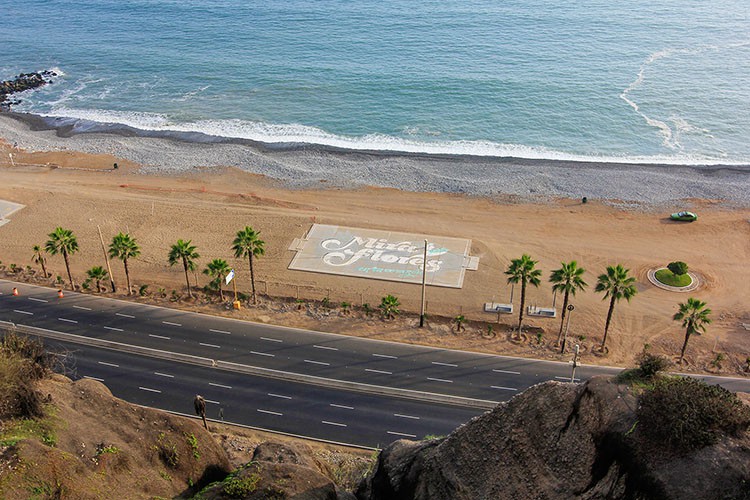 We spent a whole evening strolling this “Malecon” through the various parks and enjoying the viewpoints. There is even an outdoor mall built right into the cliff side. I would be more tempted to go shopping at the mall if it meant I got to have beers on a balcony with views like this… 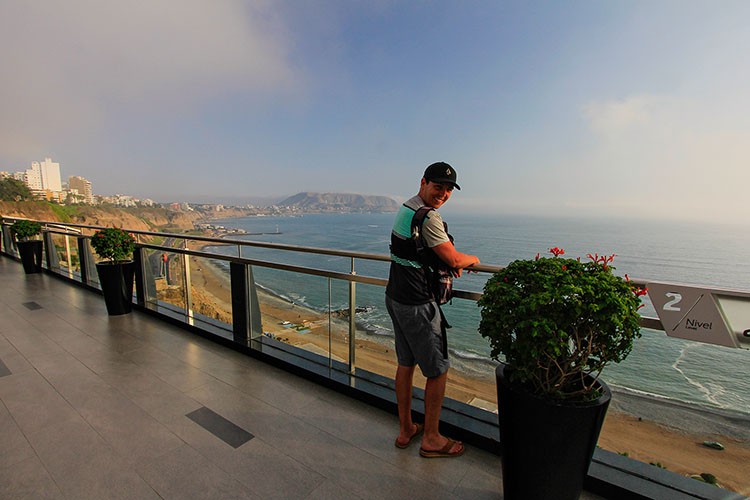 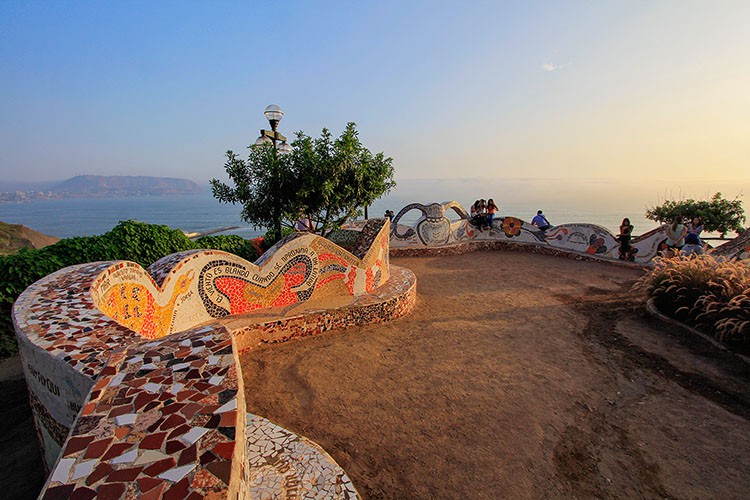 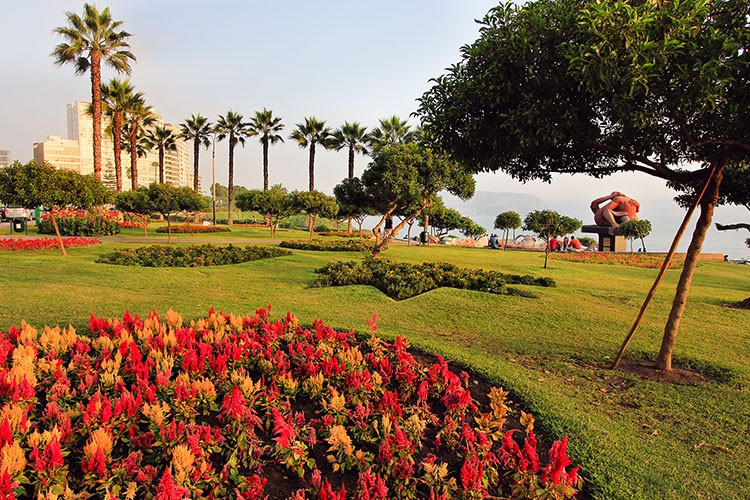 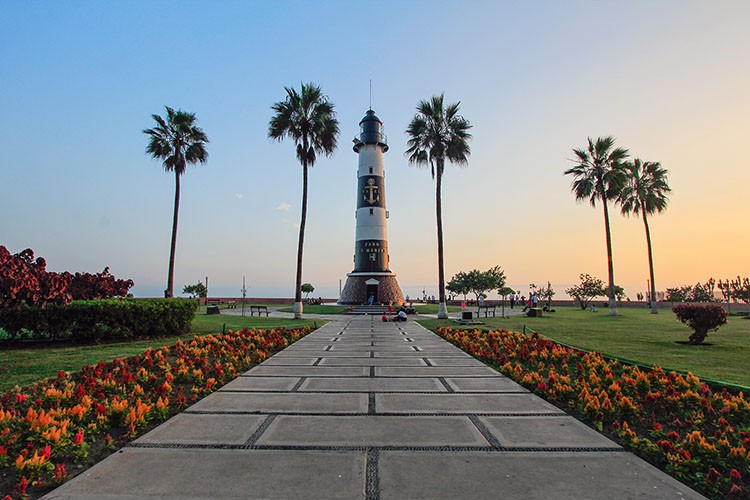 This area was bustling with people working out, strolling, and even people paragliding. It was cool to see them sail above the cliffs catching every gust of wind. 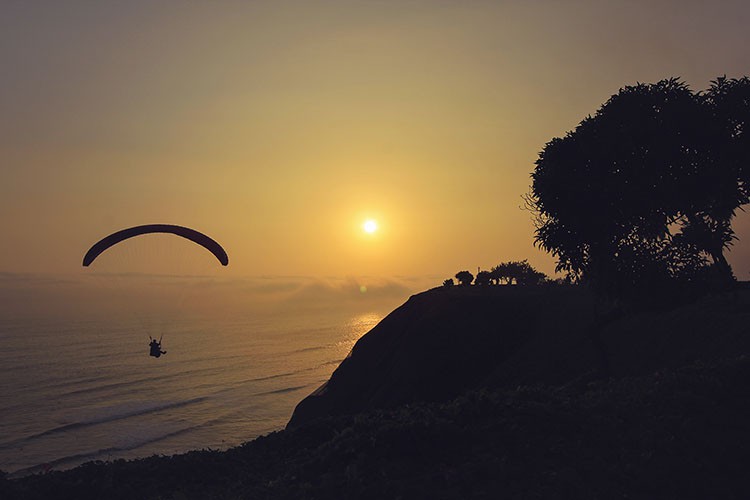 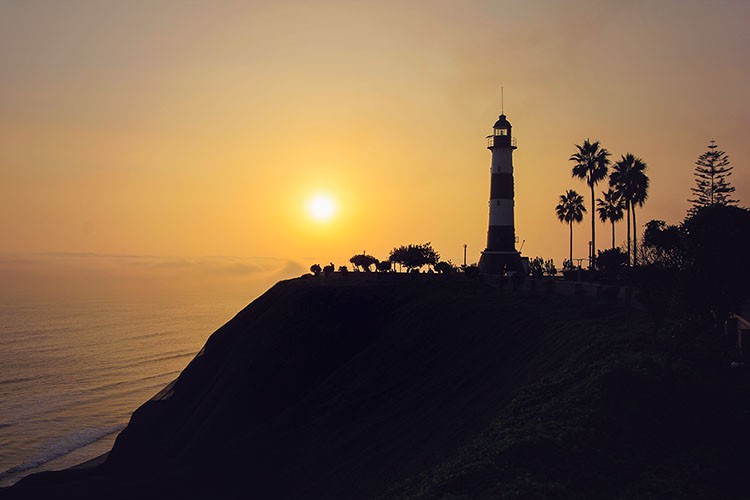 Lima is known worldwide for its amazing food, and ceviche is one of the signature dishes in Peru. The dish consists of fresh fish that is “cooked” in lemon juice and served cold like a salad with onions, potatoes, corn, chilies, or whatever else they want to add for flair. It is made in the morning with fresh fish caught that day, and once it runs out there is no more until the next day. Therefore, the best time to eat it is in the mid-afternoon. 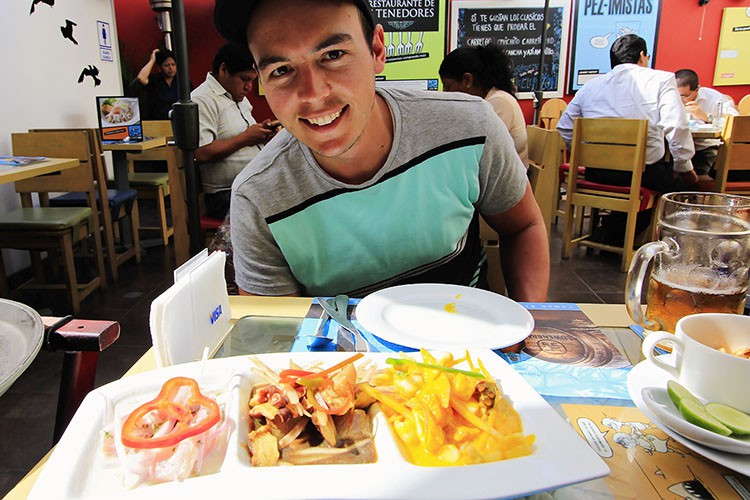 We managed to find a small cevicheria near our hotel and proceeded to have a small feast (the dish above is 3 different types of ceviche: traditional on the left, Japanese in the center, and spicy on the right). We both loved it so much we wanted more. I think we both found a new favourite!

We booked a taxi to Miraflores at the airport. There are multiple legitimate cab services in the arrivals department that you can book before you leave the secure area. The cost is more expensive ($40-50) but for us it was worth knowing we would reach your destination safely. These cabs are very nice, and are unmarked with tinted windows to avoid you being seen.

There is also the option of booking online before hand or arranging transportation through your hotel.

We stayed at the Tierra Viva Miraflores Larco Hotel and would highly recommend it. The hotel was clean, modern, and included free breakfast. The employees were always willing to help and they had a cab service that was very affordable and reliable. The location was amazing and the price was quite reasonable.