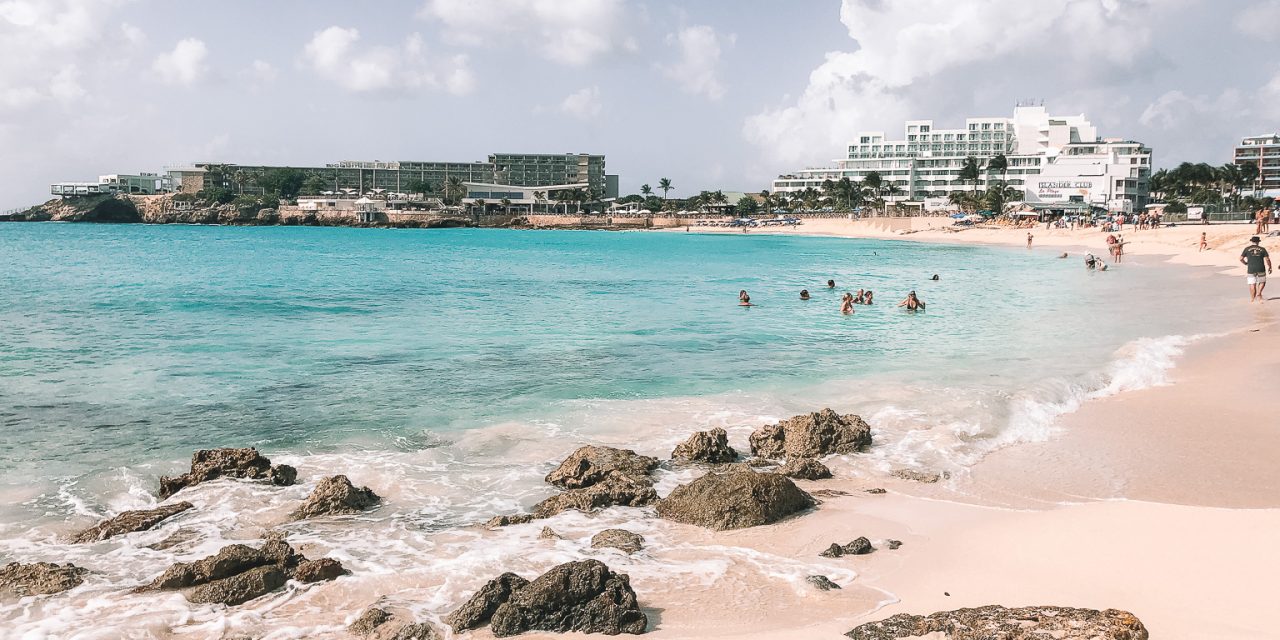 We could not have left Boston at a better time. As a “bomb cyclone” was hitting the Northeastern states, I boarded a plane headed to the Lesser Antilles.

I had never heard of a bomb cyclone prior to moving to the Northeastern states. I have lots to learn about my new maritime ecosystem! A true bomb cyclone is defined as a quickly strengthening storm with a rapid pressure drop. Which in my experience = a several day period of wind, rain and unexpectedly low temperatures.

Therefore, I was happy to be headed towards the Caribbean. Our first stop was St. Martin/Sint Maarten: the smallest piece of land to be divided into two countries. With an open border between the two, you can enjoy either French or Dutch culture depending which side you choose to visit. 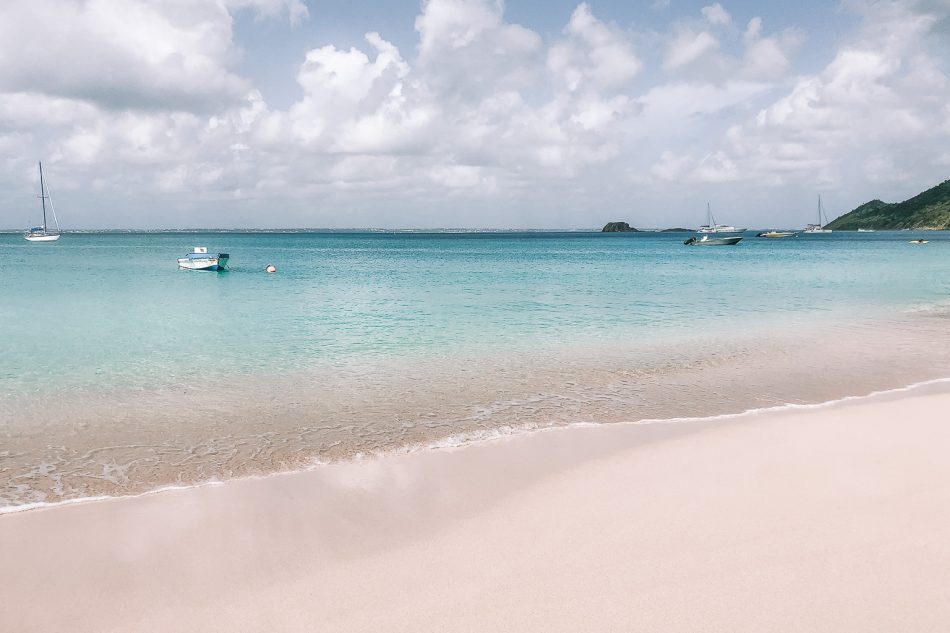 Am I in Europe or the Caribbean?!

Despite being part of their collective countries, the island is also home to over 120 different nationalities with rich African culture. And this was perhaps the most striking observation of our visit: the blend of Caribbean and European. Much of the island has a laid back colourful vibe oozing with life, but stepping into a restaurant you’ll be greeted in French, with wines from Boudreaux, and menus of Foie Gras and bouillabaisse.

The juxtaposition was disorienting, yet intriguing. We enjoyed delicious French cuisine one night, while another we ate barbecued Creole food on a picnic bench in the sand. Our hotel served lobster for dinner prepared among traditional French dishes, of which we learned much about from the local Creole fisherman. It was a lovely harmony of cultures, and we appreciated every moment.

Unfortunately in 2017, St. Martin was among several Caribbean islands hit by Hurricane Irma – the worst natural disaster in the island’s history. “Irmageddon” caused widespread destruction, with over 4 billion dollars in damage leaving 60% of the buildings completely uninhabitable.

Despite the island undergoing a miraculous amount of repairs in the short time since the hurricane, the devastation is still noticeable. Much of the island is actively undergoing repairs. Some homes have missing roofs or caved in floors. We showed up at a few restaurants to find them closed and even dilapidated. I wouldn’t let this dissuade you from visiting the island in the least, but just to adjust your expectations and to check with your hotel prior to trying out a restaurant you found online.

This also meant information on Google Maps was at times out of date, based on pre-hurricane data. We were excited to try a small French bakery which Google directed us to at the top of a mountain on the island. We managed to get our bulky sedan up this one lane road to the top, only to find a dead end. No bakery. True sadness. 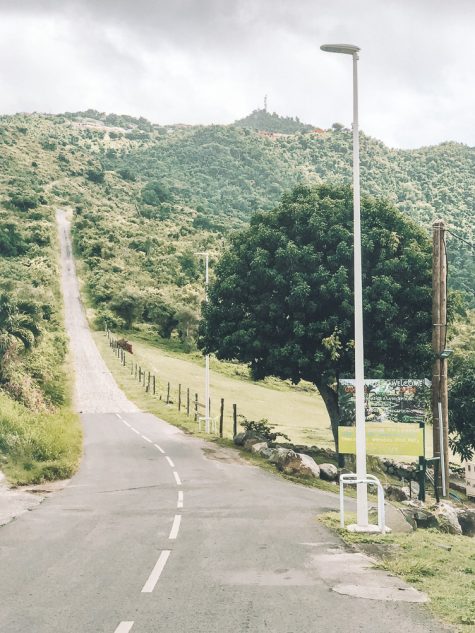 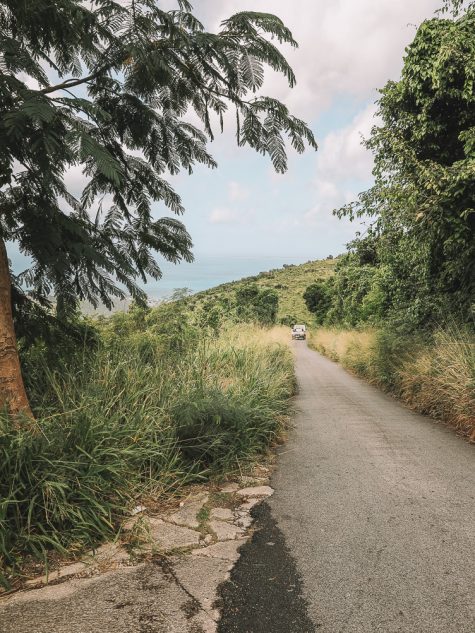 After a 30-point turn to face our car back down the hill, we decided we needed to start confirming the information we found online with the locals. And also that we should stop accepting car upgrades from rental companies eager to give us larger vehicles…

There are great options on both the Dutch and French portions of the island. We chose to stay on the quieter side of the island, away from the cruise ships, in St. Martin (the French side).

We stayed in a lovely hotel, Le temps des Cerises (LTC), a small boutique hotel located right on the water. Every one of the 10-or so beach cottage themed rooms has a beachfront view and balcony, which was a dream. 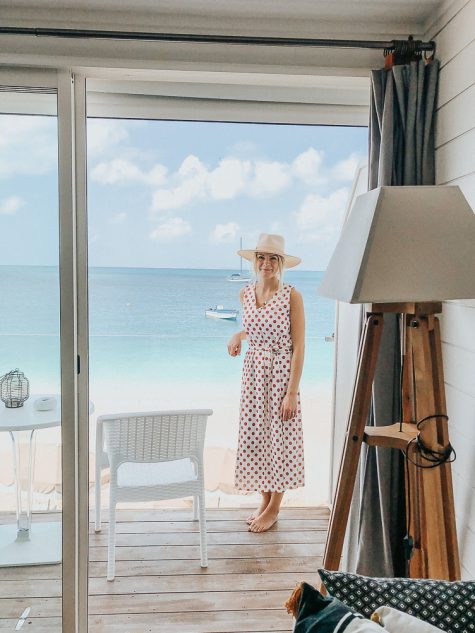 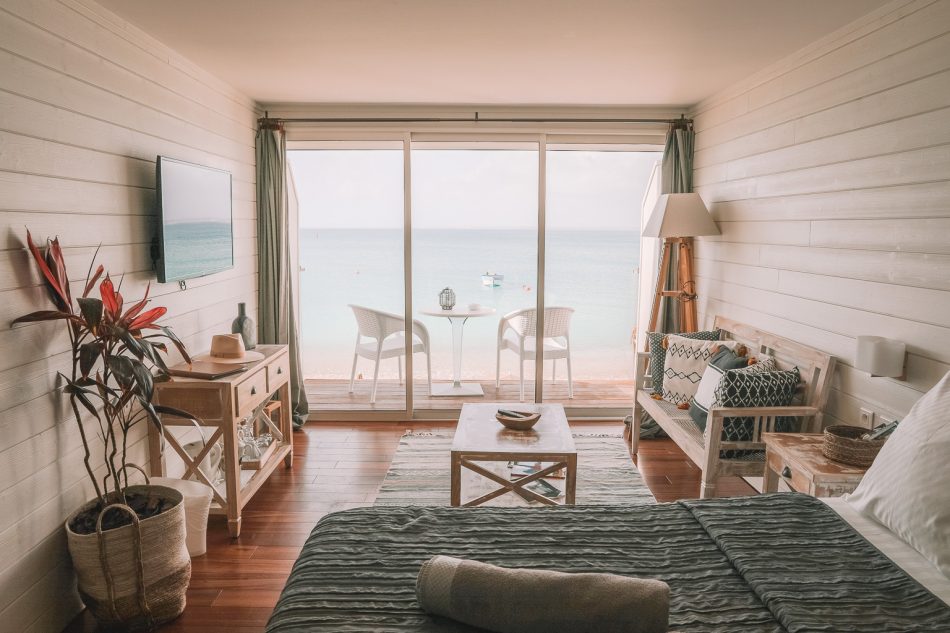 The hotel is located in Grand Case, the promenade known as the foodie haven of the French side. I’d say the term “promenade” is a little ambitious for the tiny, slightly disarrayed street which makes up Grand Case. However, we loved our time on this cozy and quiet side of the island, and appreciated being able to walk to several restaurants at night. 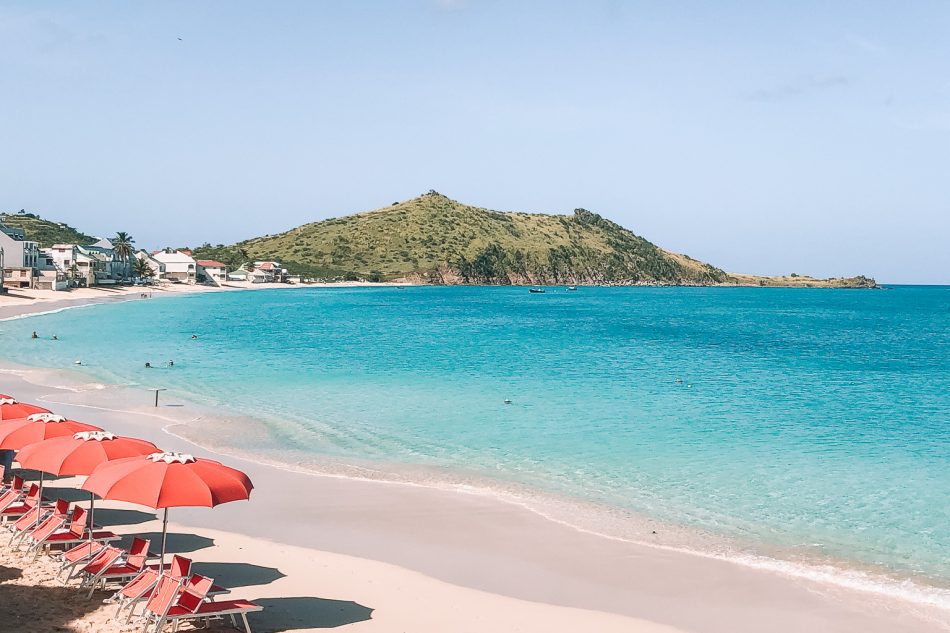 Maho Beach: Get Jet Blasted by an Airplane

Sint Maarten is famously known for Maho Beach, the small sand beach located unusually close to the runway of the island’s international airport. If you’re there at the right time, you can catch large airplanes on their final approach into the airport, passing immediately above your head. 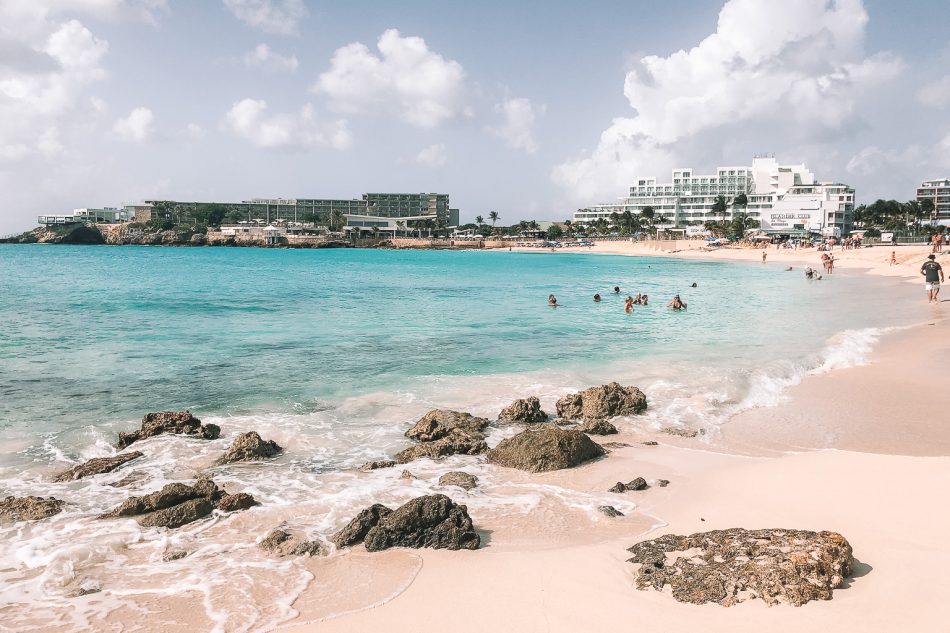 Even take off is a treat to observe, as the sound and power felt by the jet engines as the planes depart is a unique experience. This jet blast has been known to blow people away, sadly resulting in the death of an older woman in 2017. Thus, there are several signs warning visitors to keep a safe distance. However, we still saw people clinging onto the fence, hanging on for dear life as a jumbo jet took off. Bystanders on the beach were even pushed into the water. We stood a safer distance back, resulting in less dramatic photos, but you get the idea!

Is it just me, or do sunsets somehow always look more dramatic on an island? 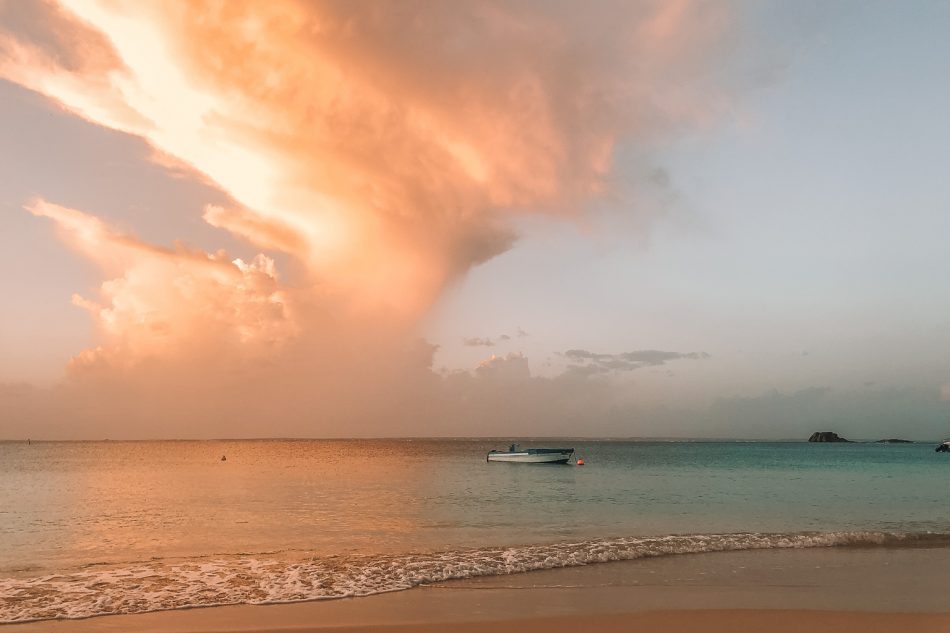 We booked an evening boat ride one evening to appreciate the sunset views from the water. It was just the two of us and our captain, accompanied by a plate of half a kilogram of cheese. Truly a gluttonous volume of cheese for two people. But we won’t pretend we didn’t thoroughly enjoy it.

But we did feel a little guilty when our captain explained how expensive goods are on the island, because food has to be imported from France or the USA. St. Martin’s dry climate and lack of water makes the island agriculturally inept, and thus it relies on outside commodities to stay afloat. According to him, without tourism – which employs over 85% of the population – the island wouldn’t exist at all! 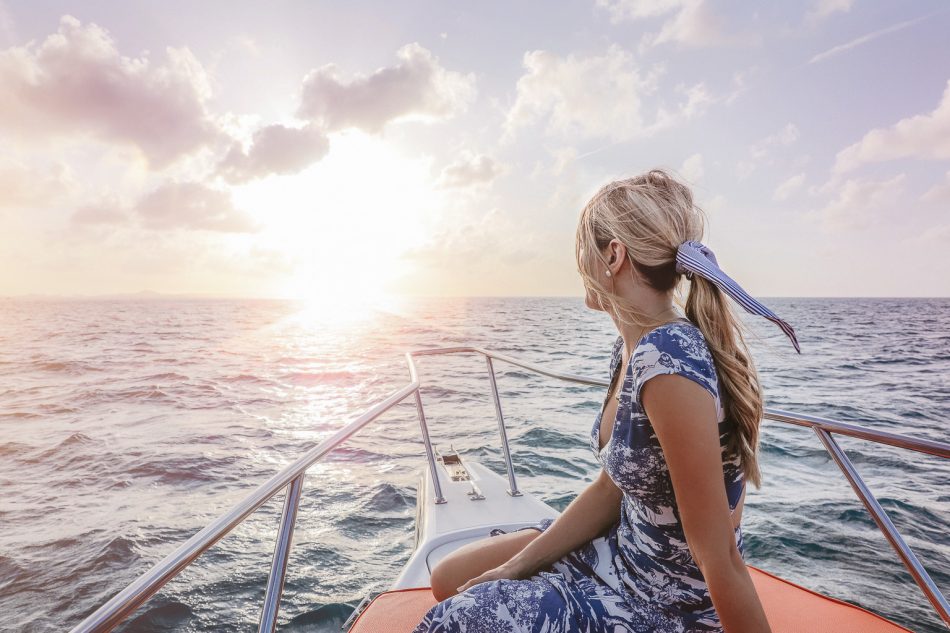 We had a lovely time learning about the island from a local, eating a generous serving of cheese and wine, all while watching the sun set over the hilly terrain of the island… 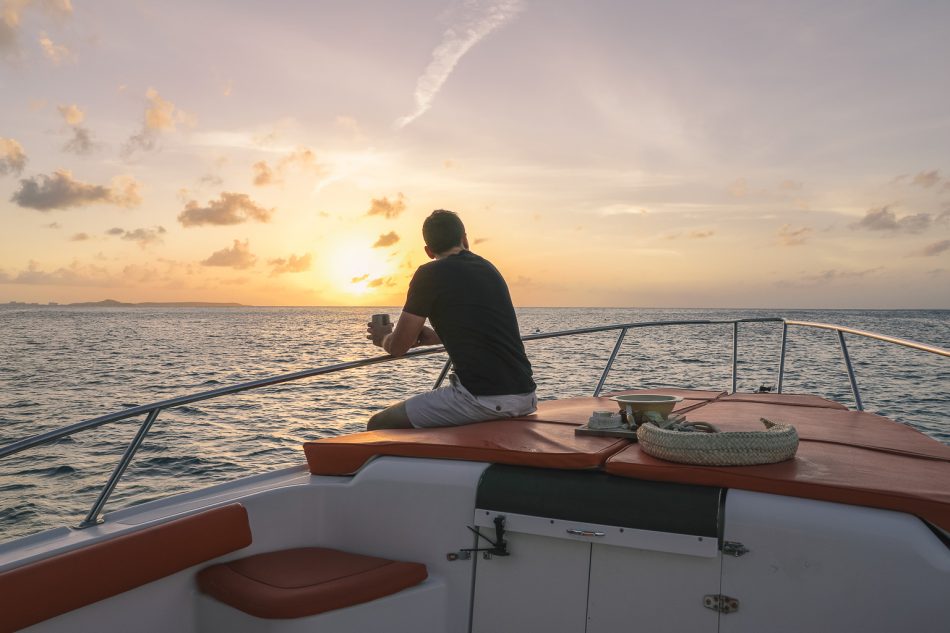