St. Barthelemy: A French Paradise in the Caribbean 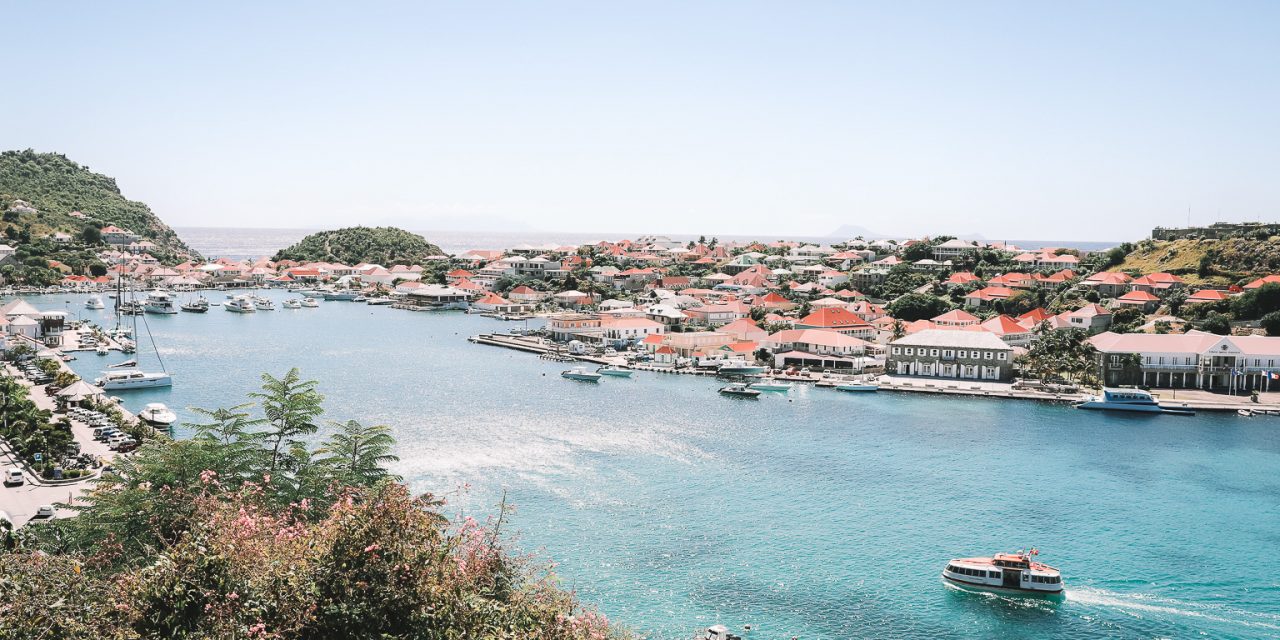 If you’ve ever been in North America dreaming of a vacation to Southern France, but wishing for a short flight in a similar time zone, then St Barthélemy is the place for you. At times, while visiting this French Caribbean island, I could be fooled into thinking I was strolling down a waterfront in Nice or Antibes.

St. Barthélemy or St. Barths – as the island is casually known – has French sophistication mixed with the white sandy beaches and turquoise waters of the Caribbean. 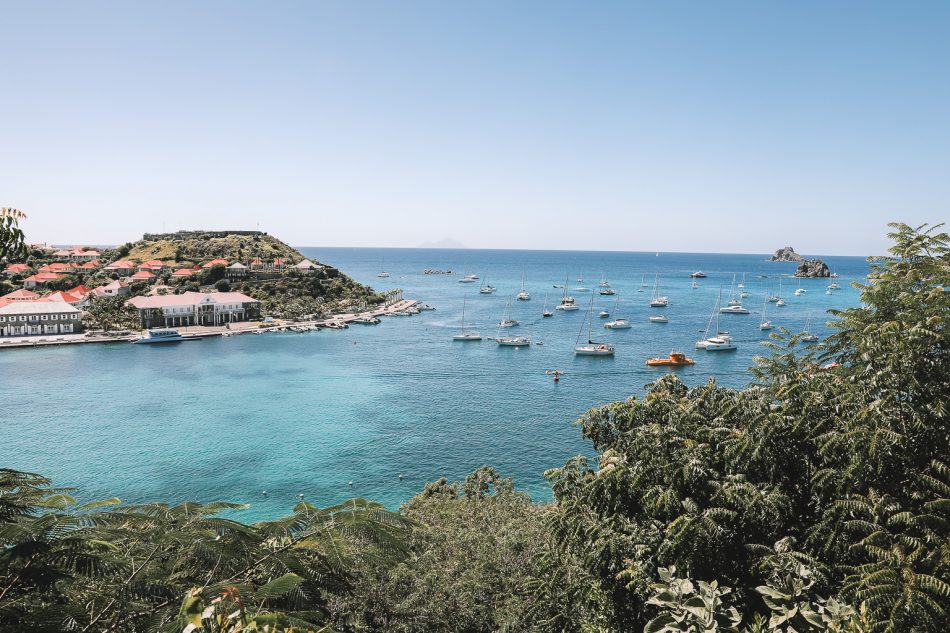 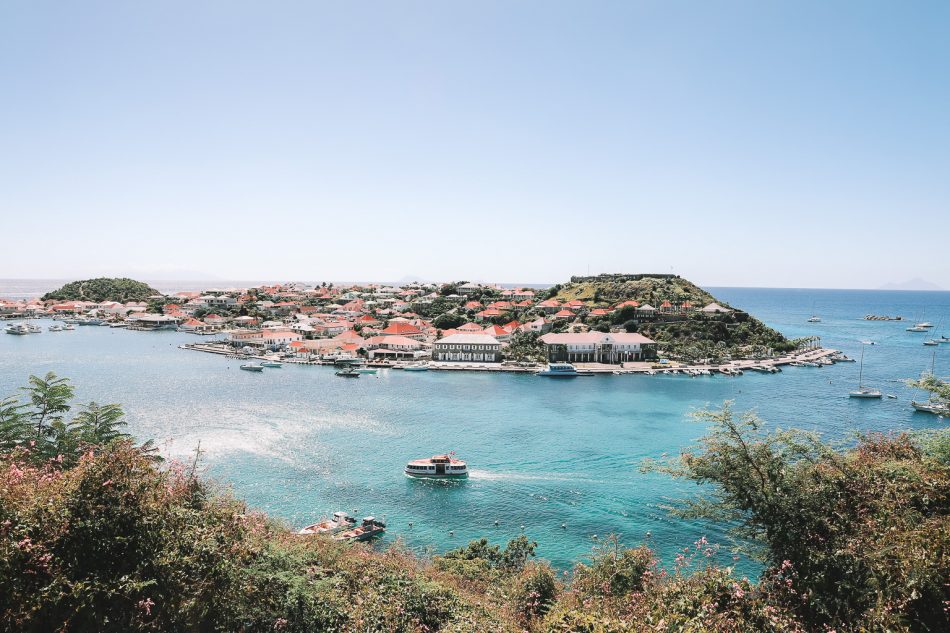 And it definitely has a reputation. As the Caribbean’s most expensive island, there is perhaps an expectation of some level of pretentiousness. While we definitely sensed that the island draws an elite crowd, we were also pleasantly surprised by the relaxed, laid back Caribbean lifestyle. The dress code is casual with many restauranteurs donning flip flops or going barefoot while dining in the sand – as if they weren’t paying 40 euros for their entree. 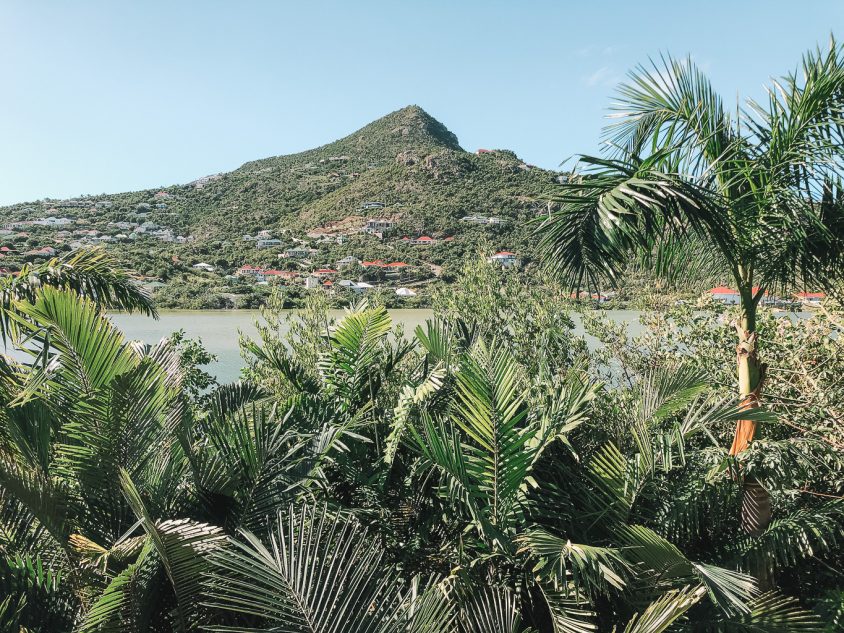 Despite it’s price, St. Barths is more accessible than expected. This is especially true during off or shoulder season when the prices for accommodation can drop substantially. Beaches are abundant, free, and all publicly accessible. There are also various restaurant options, from relaxed, low cost beach-side shacks to upscale world renowned restaurants. The island has something for everyone.

Are We in France?

This island, like other parts of the Caribbean, was discovered by Christopher Columbus, who named it after his young brother, Bartholomew. It is a collectivity of France, and thus all the residents are French citizens – they even vote in the French elections. Français is the primary language, and the currency is the Euro. It really does feel like you’ve been transported into Europe upon arriving to the island!

And unlike St. Martin, which has a large population of people of African descent along with the French, St. Barths residents are predominantly of European heritage. Many locals we spoke to had grown up in France and moved to St. Barths for work or for a change of pace. 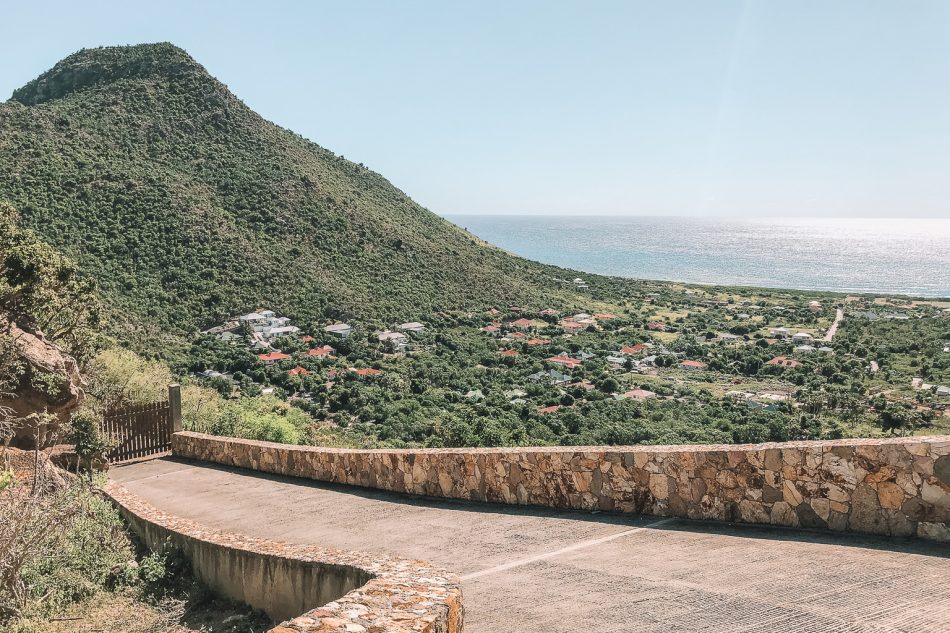 Gustavia is the island’s capital city, a visually charming city with its red roofed houses and boat-filled harbor. You can find plenty of expensive shops, restaurants, and nightlife in town. However, the only nearby beach is Shell Beach, which is lovely but small – not likely a place you’d settle for days. 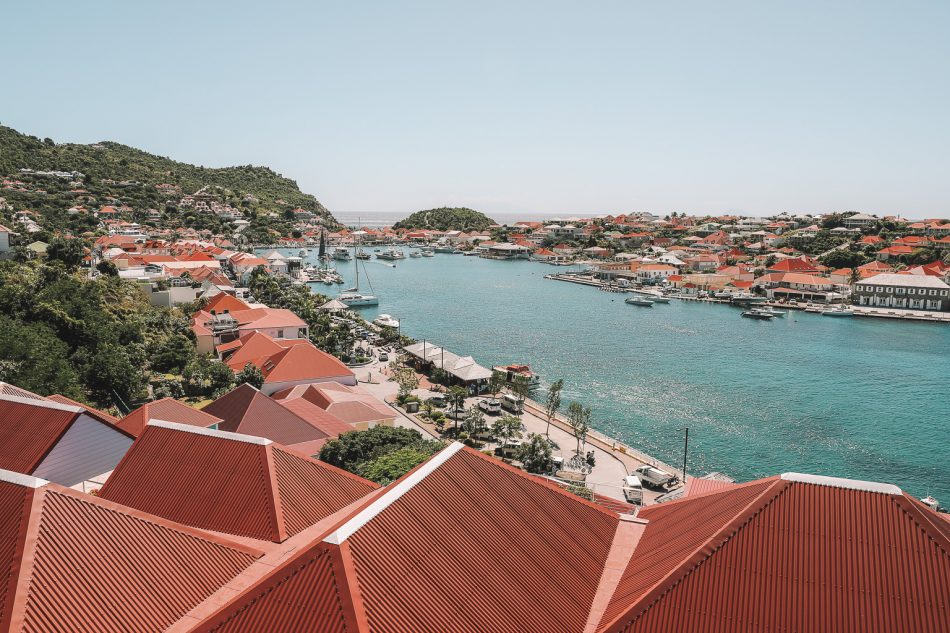 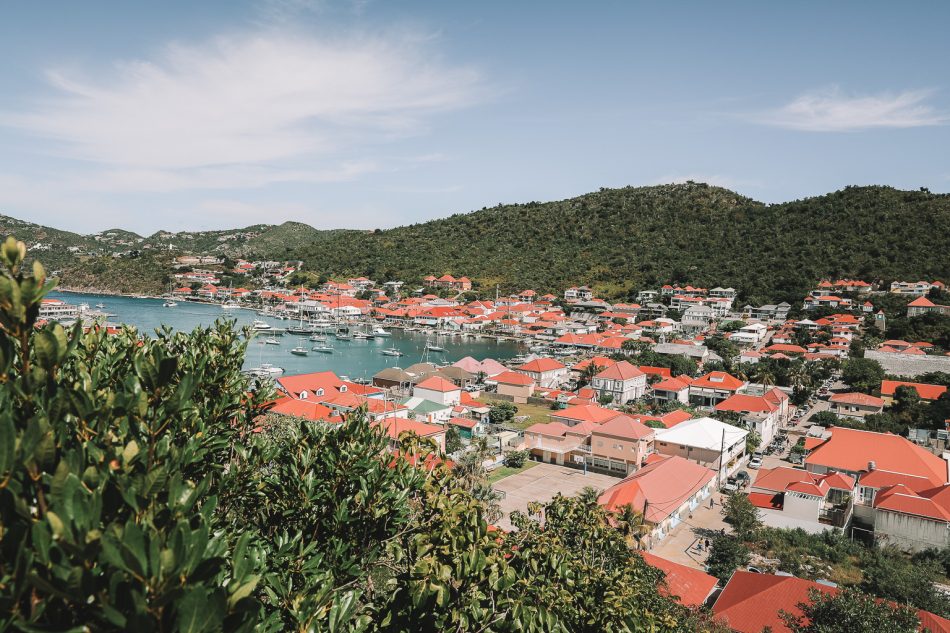 Therefore, we chose to stay further away in the Grand-Cul-de-Sac, at Le Barthélemy Hotel & Spa – which we absolutely loved. The hotel is beautiful, all the rooms face the water, the service is impeccable, and the food is great too. 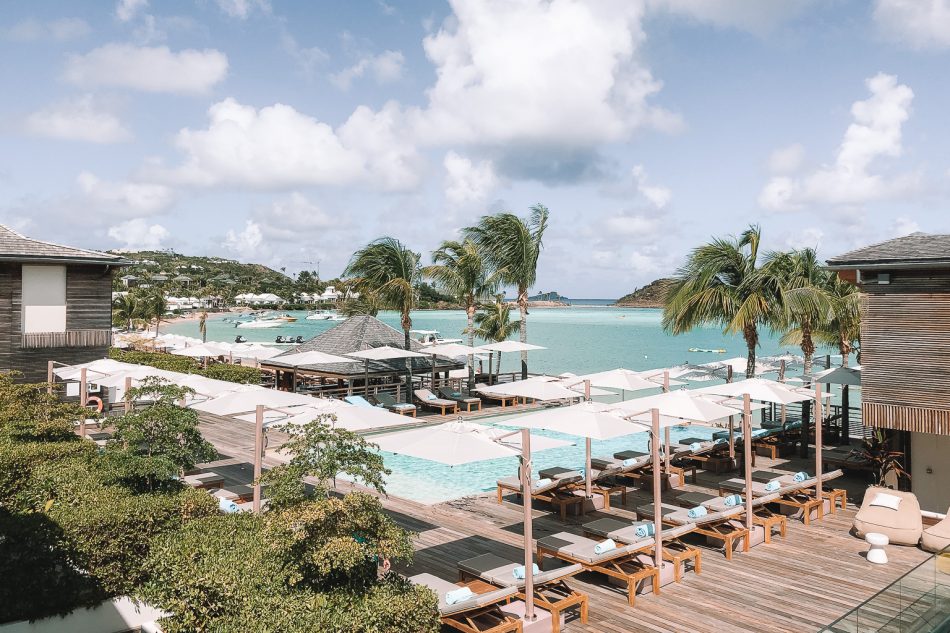 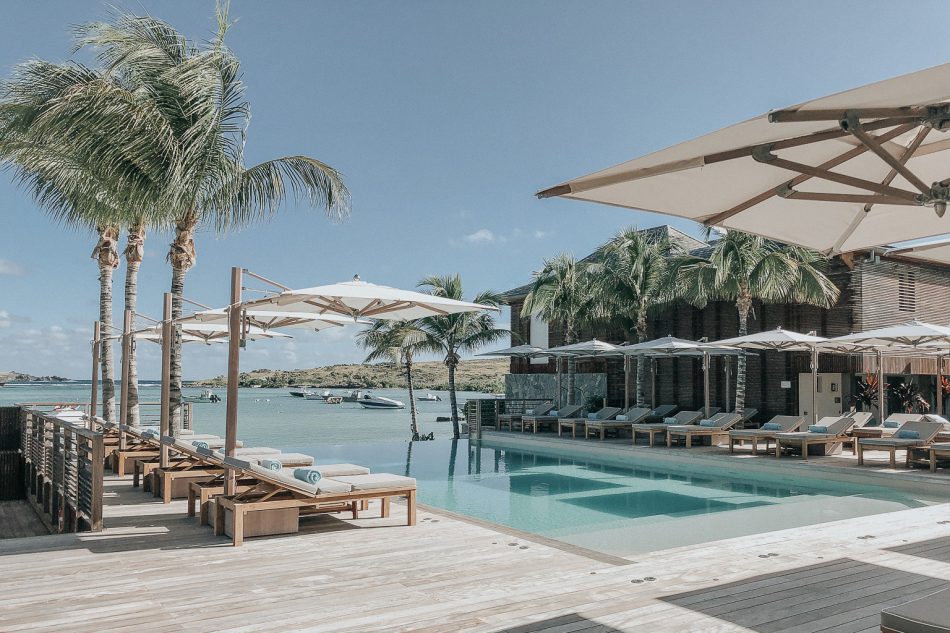 On top of that, the hotel’s beach happens to be right on a quiet bay full of turtles. We paddle boarded out our first day to find ourselves surrounded by six turtles, including one baby one. We spent our days enjoying the complimentary water sports (kayaking, canoeing, paddle boarding, etc.) or just lounging by the ocean or near the pool. 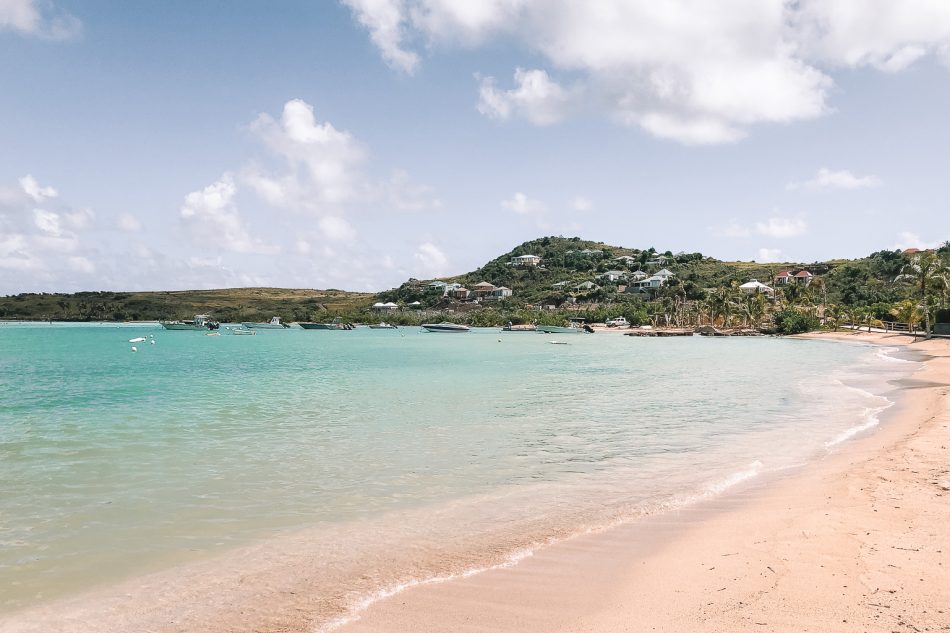 And when we weren’t doing that, we were using our stylish ride to explore the island…

Exploring St. Barths wouldn’t have been quite the same without this funky mobile. The “Mini Moke” was first produced in 1964 in England. It was intended to be used by the British army, but its low clearance and toy wheels made that impractical. 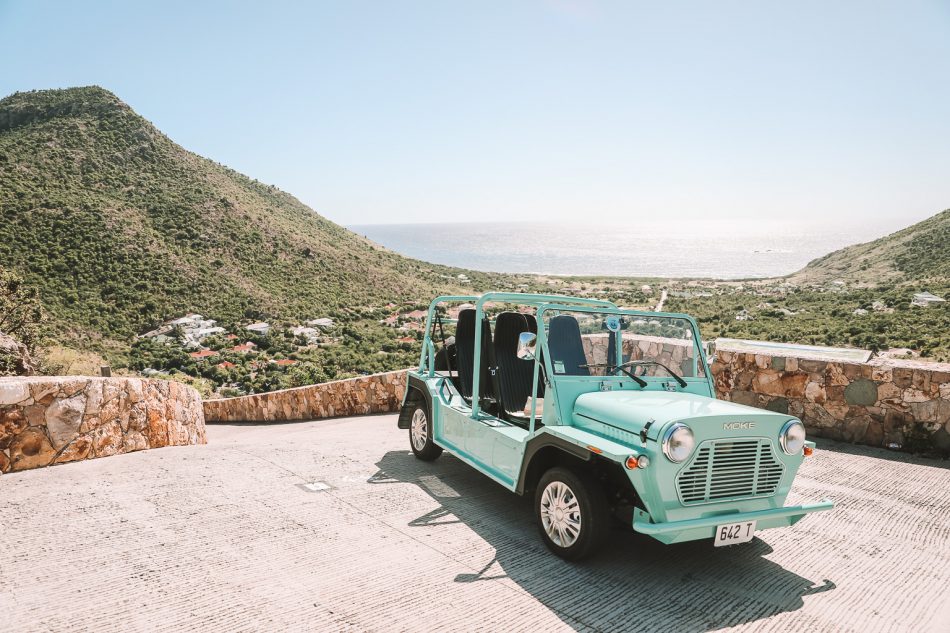 Instead, the Moke (meaning “donkey”) became a popular beach buggy. Its fun colours and open air concept make it the perfect mobile to cruise along the ocean with the wind in your hair! 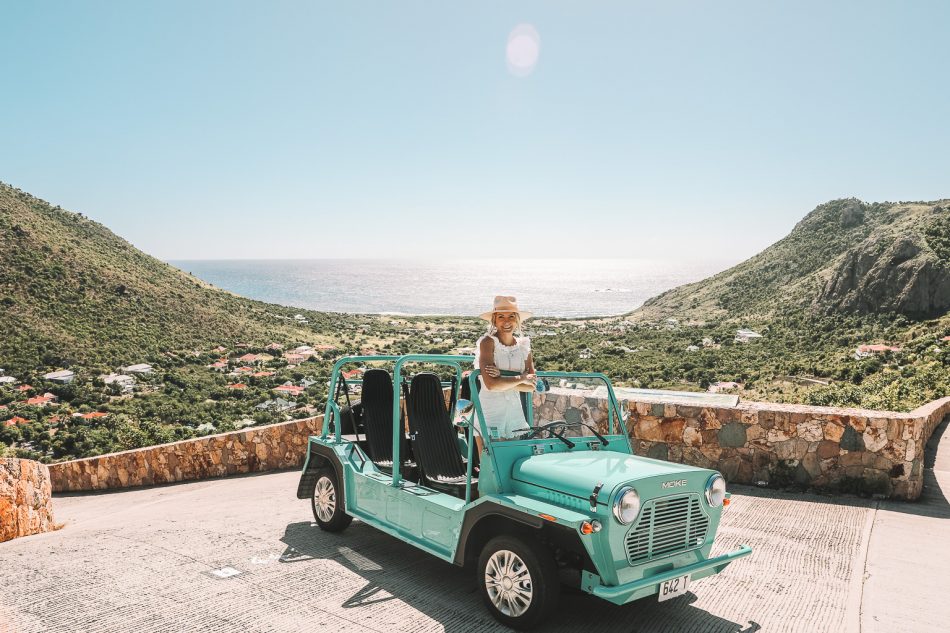 Given its age, it’s not the most powerful of cars. We found the car struggling up some of the hills of St. Barths as the semi-automatic transmission abruptly shifted gears mid-hill. However, with French dance music playing off the portable speaker nestled in our cup holder (no Bluetooth here!), we enjoyed every minute. 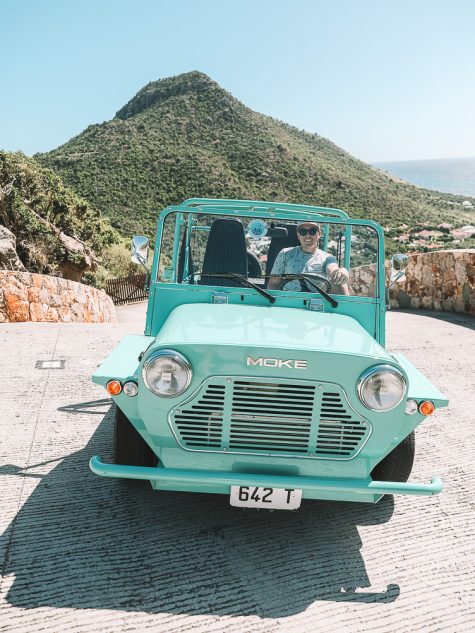 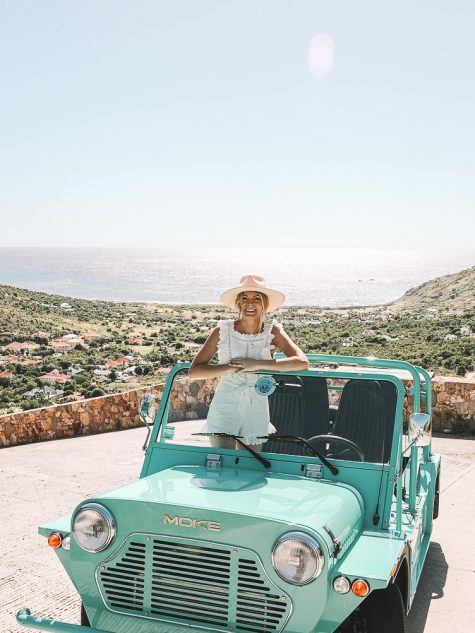 Beaches all to Yourself

One of the most amazing parts of visiting St. Barths is the numerous uncrowded beaches. The island has 22 beaches to be exact, and several of them feel almost uninhabited. This is especially true if you are willing to do a short walk or hike. 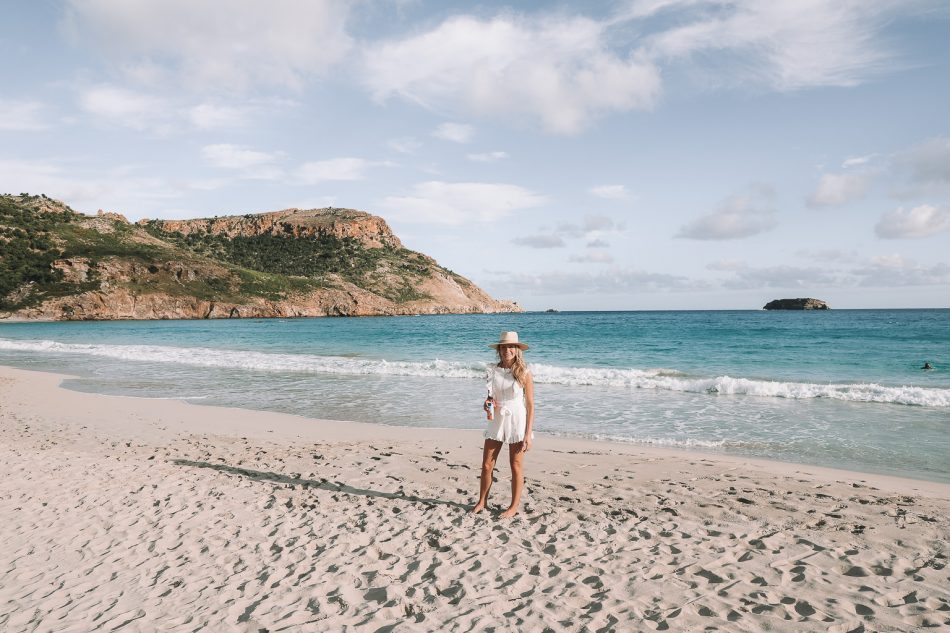 Le Colombier was one of our favourites, and is arguably the most secluded beach on the island. A short 20-30 minute hike takes you to this hidden bay, which we shared with only three other couples. 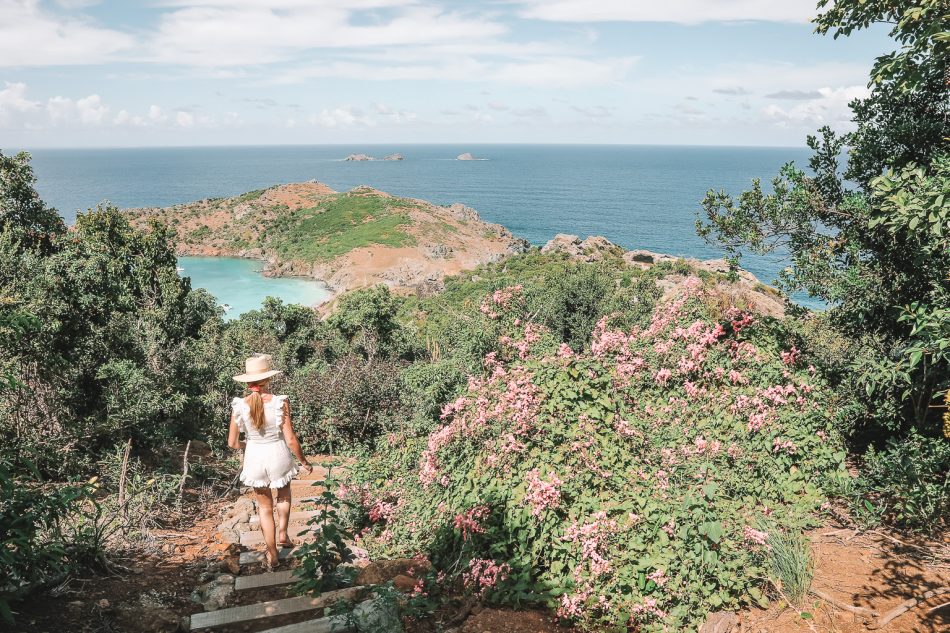 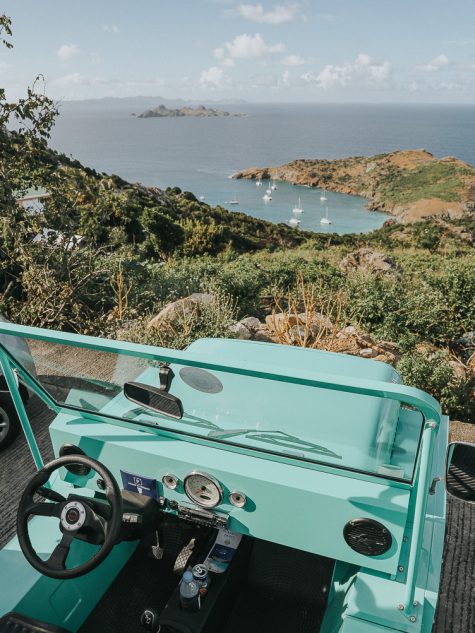 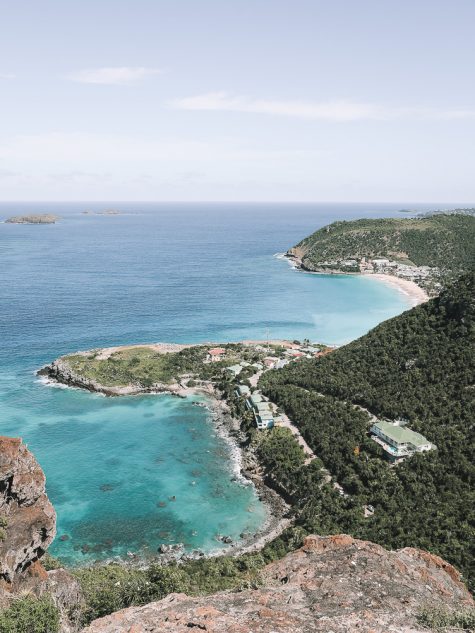 An even shorter 5 minute walk takes you to Saline Beach, which was minimally busier. The bigger waves on this beach make it a great spot for boogie boarding. And the best part? We were accompanied on our short walk to the beach by a turtle which was headed in the same direction. 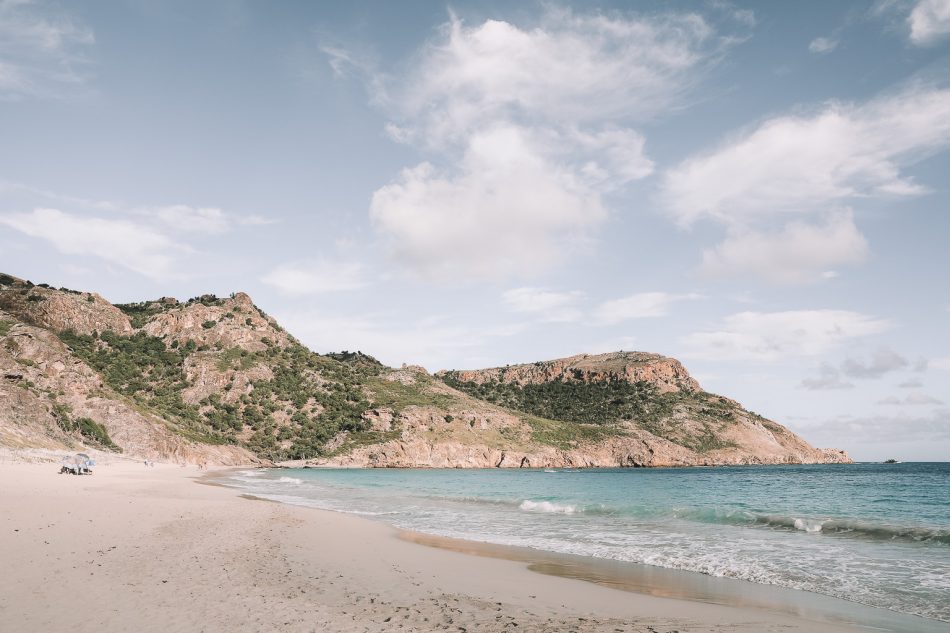 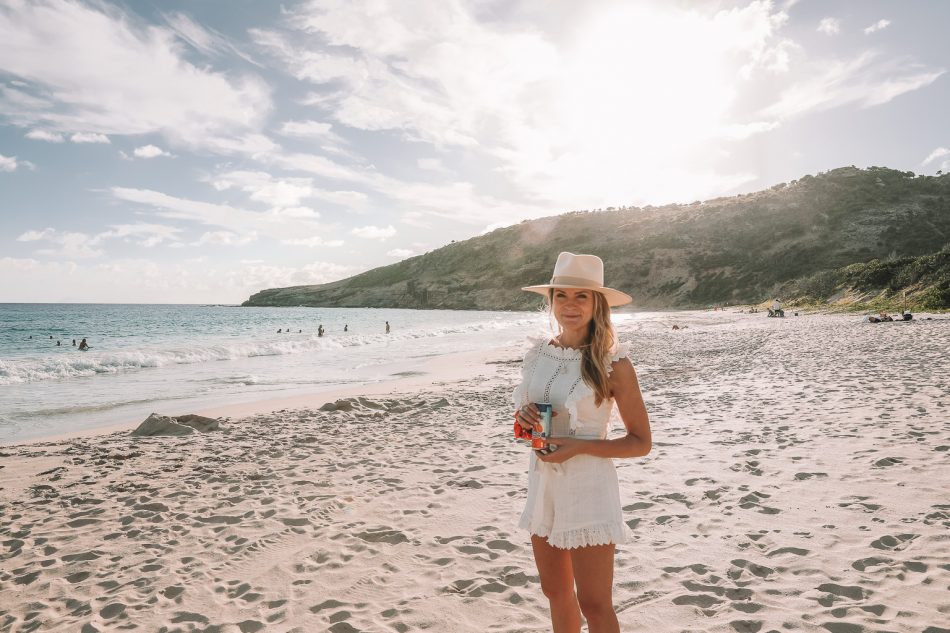 Just a note that most beaches in St. Barths are very natural, without shops or restaurants. Most are also in the open without any source of shade. This adds to St. Barths’ charm, but you might want to remember to pack drinks, snacks, and possibly an umbrella.

Getting There: Scariest Flight in the World?

Flying into St. Barths is a fun experience. The island is home to the world’s shortest runway, which begins immediately at the base of a small mountain and ends in the ocean. It is only accessible by small prop plane and an arrival into the island means nosediving right over the mountain in order to have enough room to land the short runway. 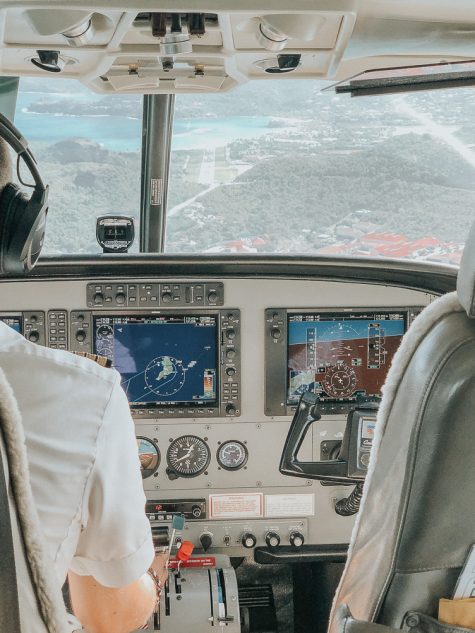 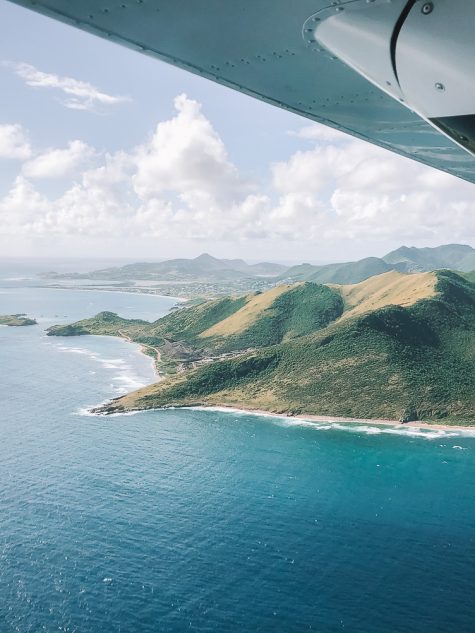 We really enjoyed the flight, as our small commuter plane seated only six people (in bench seats) and offered great views of the islands as we traveled between them. Apparently you can even sit right beside the pilot if the plane is full!

The St. Barths airport is also a dream. It’s tiny and easygoing. We were the only ones at the gate when we showed up to check in, and only two of 6 people in the airport lounge awaiting our departure. There wasn’t even a security check prior to entering the lounge! 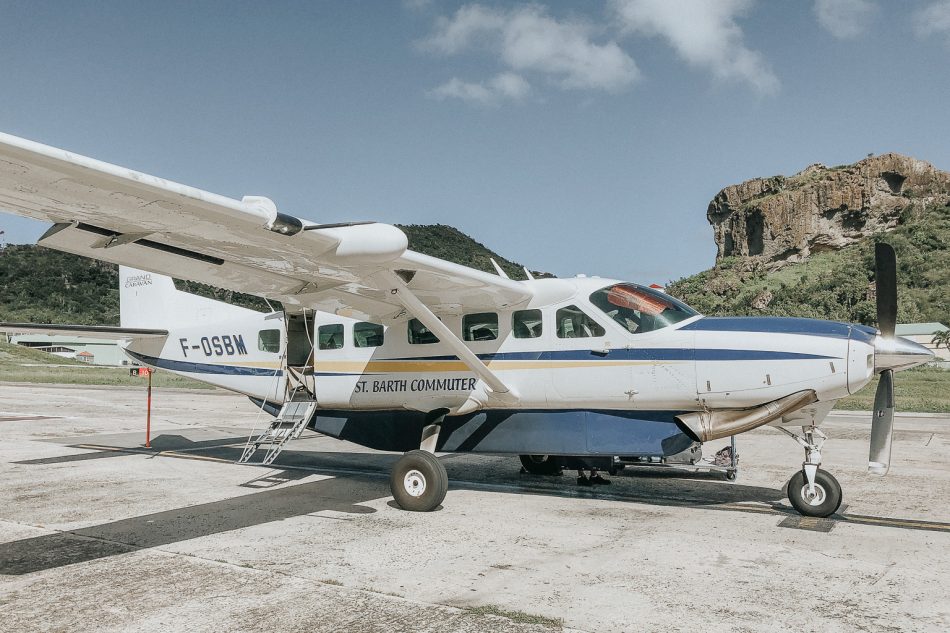 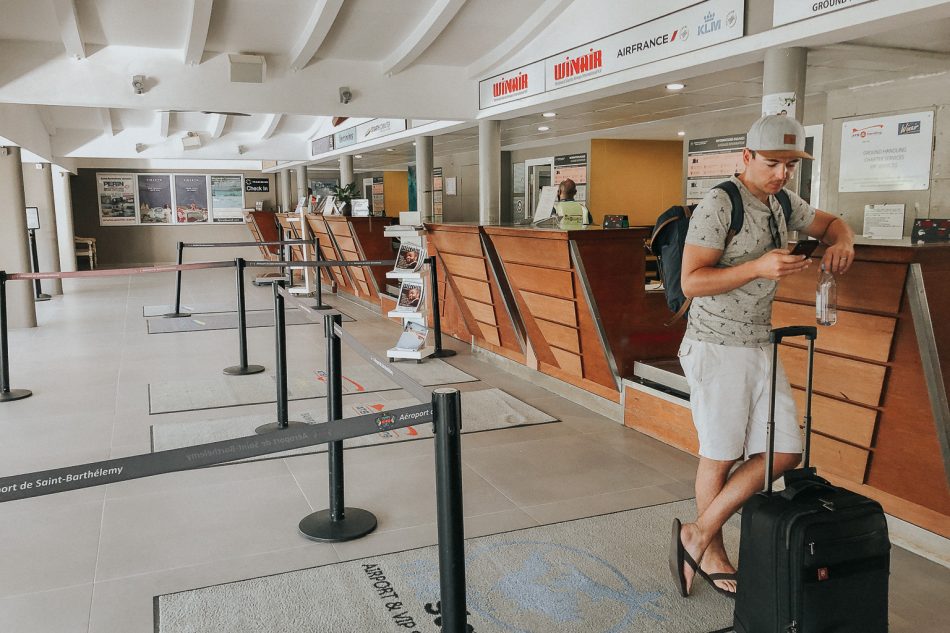 We were content with this leisurely attitude, as taking these small commuter airlines was our main way of getting between the islands of St. Martin, St. Barts, and Anguilla. Speaking of Anguilla, that is where we are off to next!