Rainy Day at the Grand Canyon 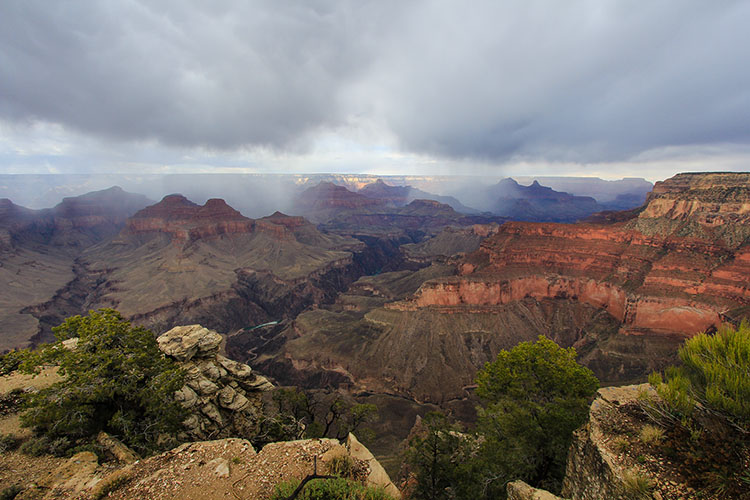 We basically had a personal tour of the Grand Canyon today! 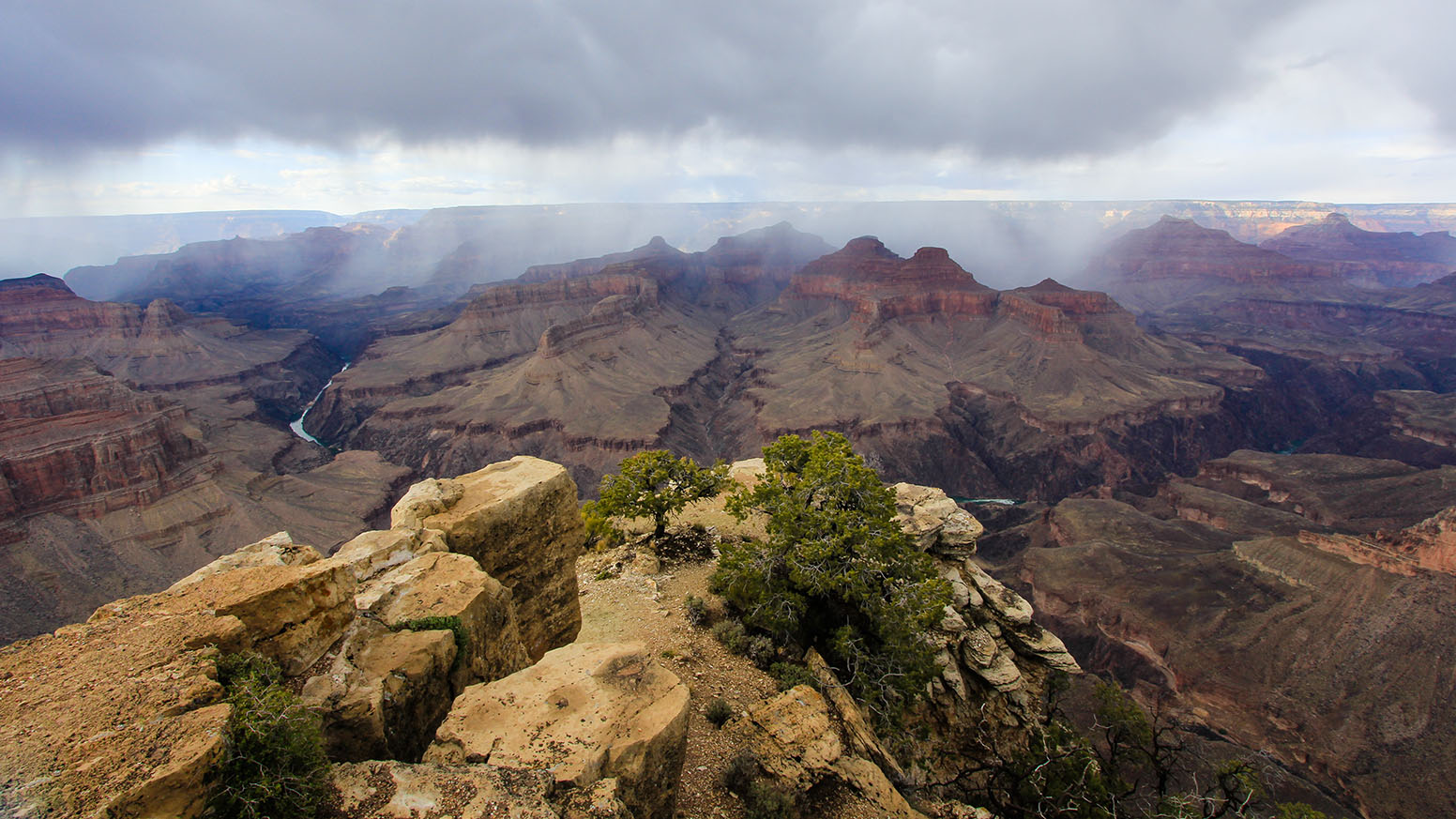 As we crossed from Utah into northern Arizona, things suddenly became green. Flat plateaus of sandstone gave way to lush forests of Kaibab trees. And as we entered the Grand Canyon National Park, Utah was starting to feel further and further away.

The tall trees were actually kind of nice… because it allowed us to be truly suprised the first time we left the car in the forest and walked a windy path to end up at the ledge of the Canyon. I don’t know what I was thinking, but I thought the canyon would be a single gorge with a river flowing through it, just incredibly deep. But when we finally saw the Grand Canyon it really was breathtaking. I didn’t expect it to be so vast! 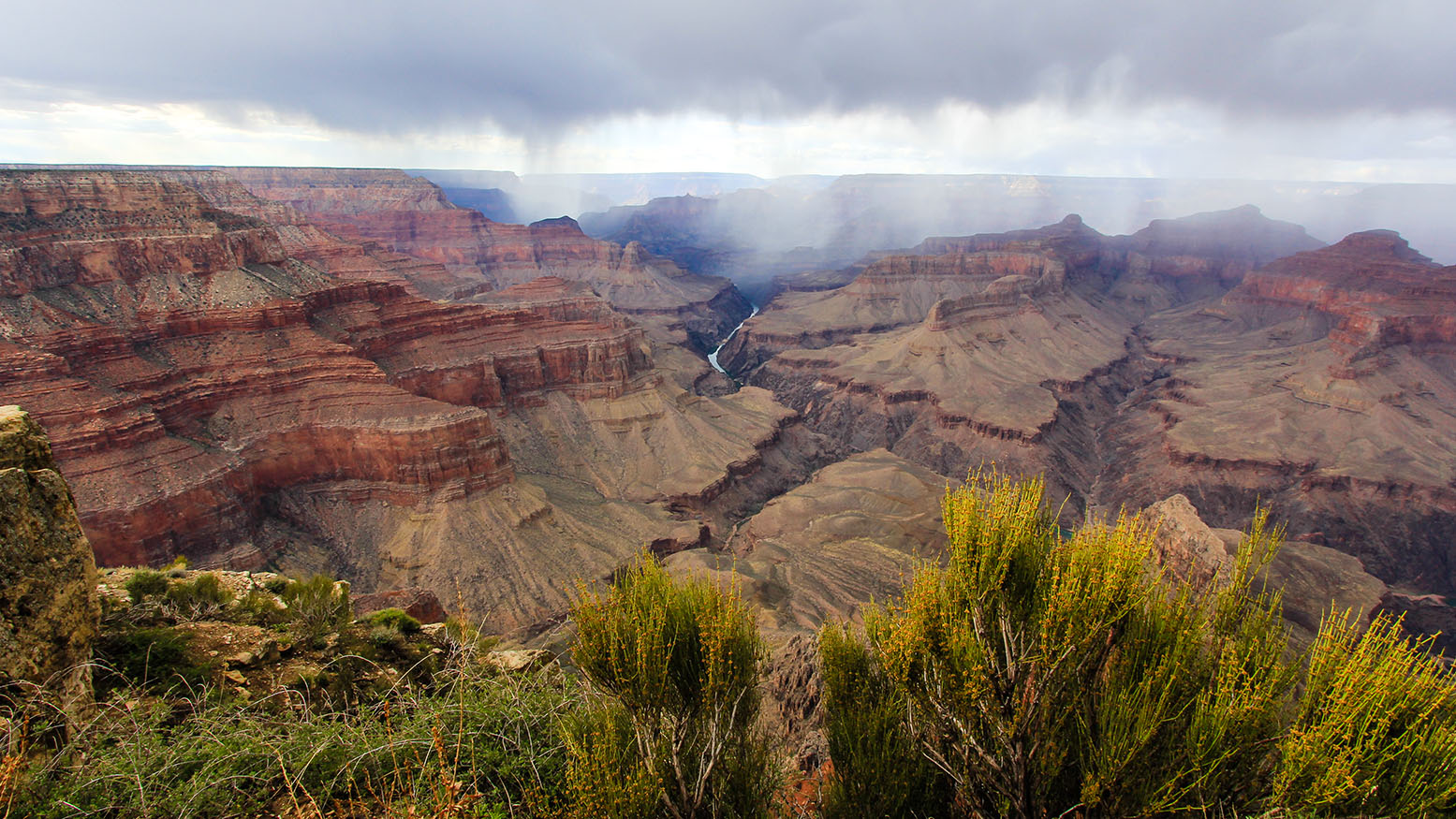 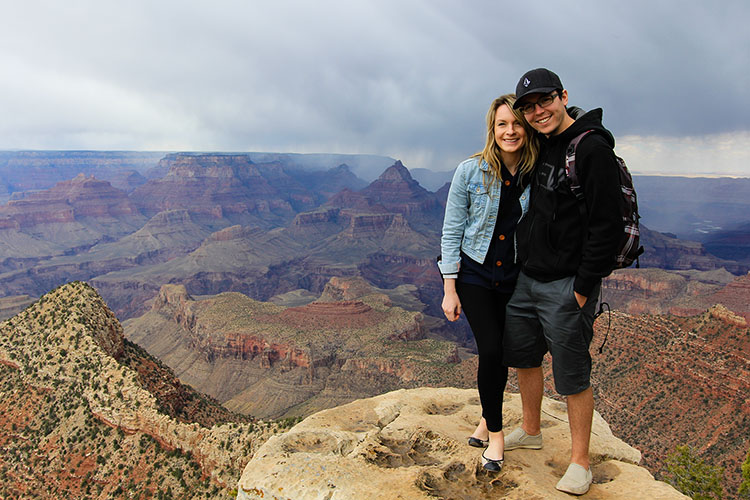 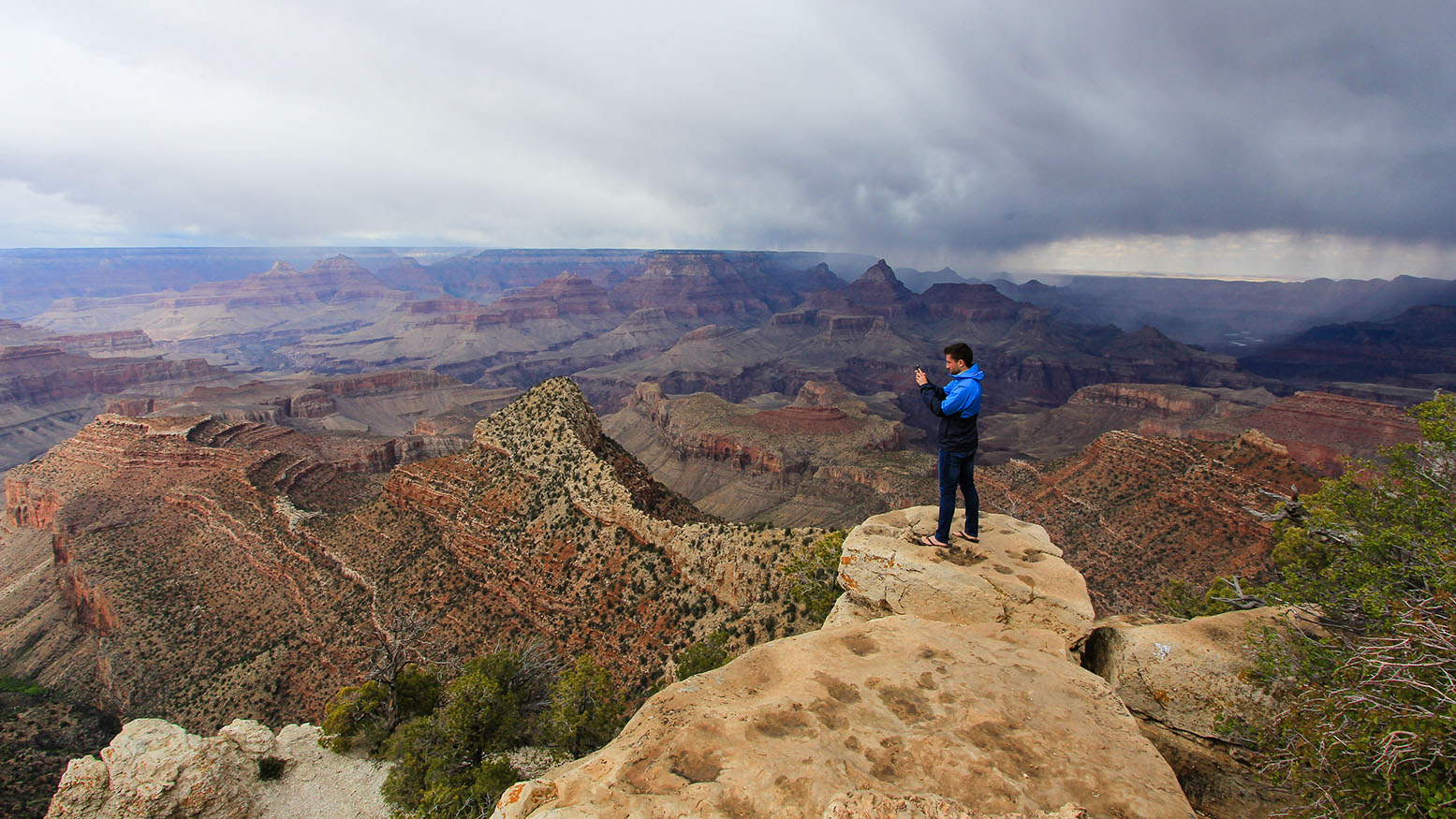 Unfortunately, the weather was a bit moody today with very angry clouds. After our first stop on the shuttle, there was a sudden downpour which started our Grand Canyon rainy day. Since clear skies were visible in the distance, we decided to take shelter within one of the park’s shuttles and ride the track up and down until the storm passed. But then half way along the route, the bus driver asks if everyone just wants to head back to the lodge… with a unanimous “yes” from all the passengers we’re left disappointed. We weren’t ready to go back! 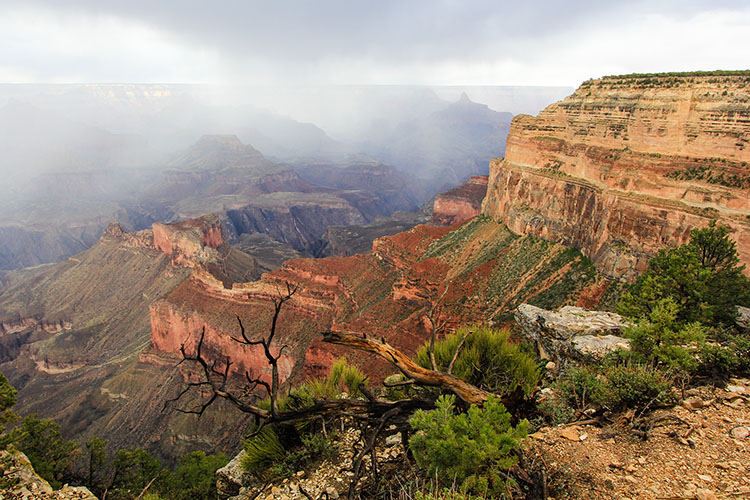 We head back and as everyone piles off, we stay on the bus and insist the driver go back on route. Magically, there are 3 other groups that stay on the bus with us, resistant on giving up. We look around and realize it’s only Germans and Canadians left, and I felt a little proud of our shared resilience :)

Our ride back was lead by driver Ms. Jax M (does she know when you say it fast it becomes Ms. Jackson?). She gave us a private commentary on the Canyon. At times she even paused on the roadside, let us all hop out to snap some photos and hop right back on before moving onto the next stop. It was like we had our own personal tour guide. What private service! 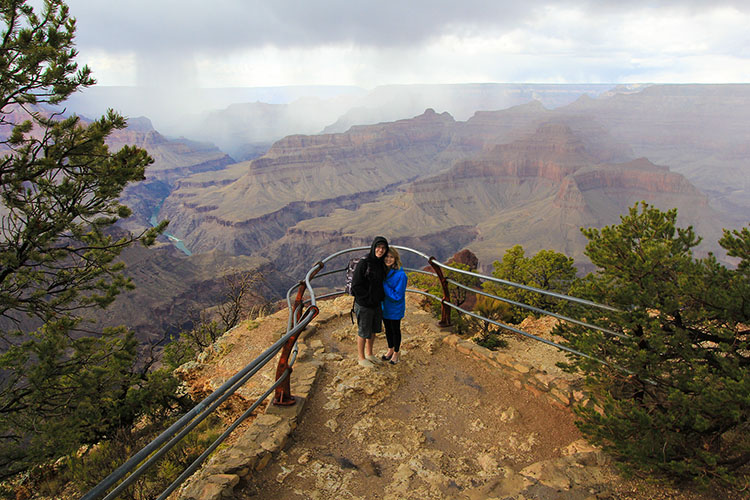 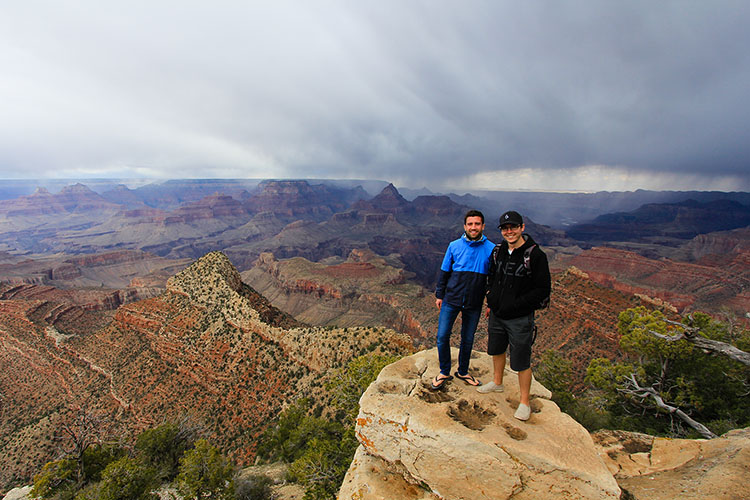 Finally we had to say goodbye as we got off for good (“I’m sorry Ms Jackson”) and enjoyed the now sunny weather over the canyon! Though evidence of the angry clouds remained in the background… 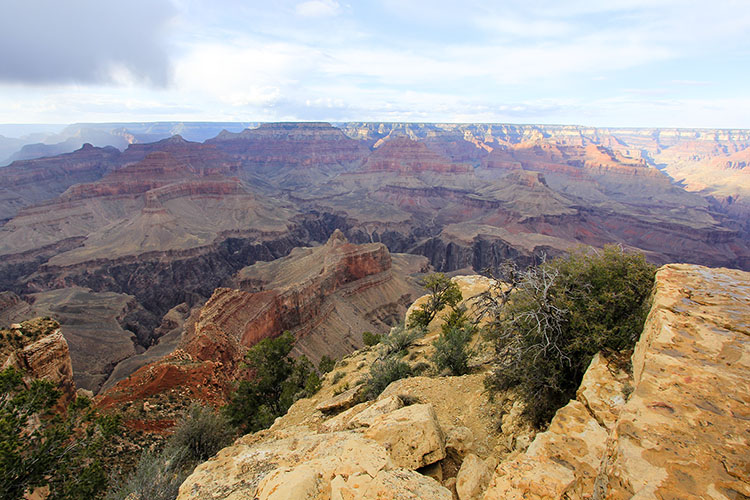 PS. The boys wanted to try Twinkies for the first time. What better time than to try them at the Powell Point lookout, now known as Twinkie Point. 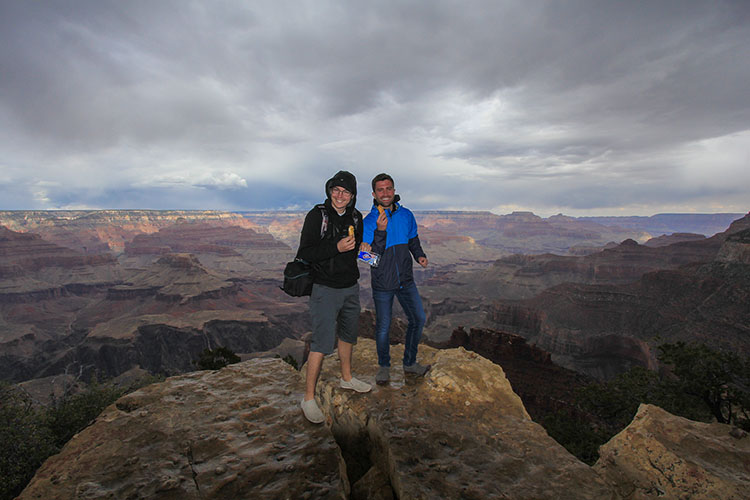 PS2. On our next return to the canyon, we all agreed we’d prefer to see the less-visited North Rim. We didn’t have the time or resources possible to do that this time (it is further off the beaten track with some viewpoints reached only via gravel roads), but we’d recommend it to those interested in seeing the canyon’s less busy/developed side.

There is an entrance fee of $25 to get into Grand Canyon National Park. Along the south rim of the park there are multiple viewpoints from which to look at the grandeur of the canyon. It is entirely possible to walk between these lookouts, but there is also a free shuttle that will take you from one to another. There are also hikes (single and multi-day) available that will take you down into the canyon if you’re feeling a little more adventurous!