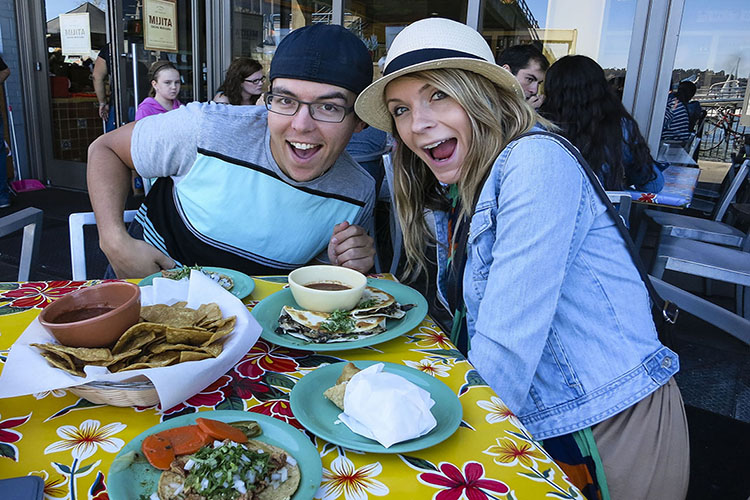 Summary of our first day of indulgences in San Francisco:

I think that makes us true Americans now.

However, I must say that goods aren’t quite as expensive as I expected. We’ve enjoyed quick lunches for $4, bought decent wine for $3.50 (doubtful, I know), and went out for an evening out where our shared tapas and wine cost us $43 total for the three of us. Not bad at all. 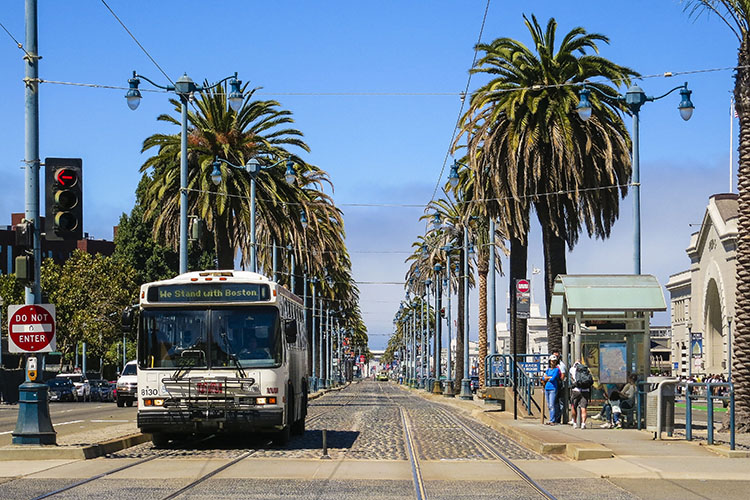 On the other hand, we’ve conquered a lot of San Fran in our time so far, including farmers market shopping at the Ferry Building and being overwhelmed by tourism at Fisherman’s Wharf. Here is a quick summary of what we learned in our San Francisco Travel Guide:

The cable cars here are the last moving historic monument in America. They run now mainly as a tourist attraction, but you can definitely use them to get around if you have all day to dedicate to transit. 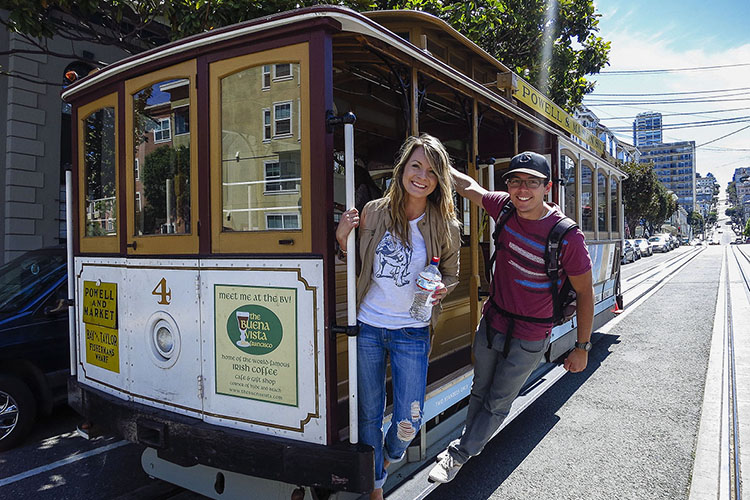 I had to pull an “Aunt Becky” and hop on for a ride (Full House reference for those of you that are lost and missed a critical part of childhood). There’s still something a little bit fun about dangling off the side of the car and hopping off whenever you need.

Shane and I just happened to watch a show on these cable cars before we came here in case you were interested in some fun facts. We learned there is a constant cable moving underground up the hill; the cable car just grabs onto it and cruises along. When it hits an intersection, it lets go and just floats across until it grabs on again on the other side (so the cables can criss-cross as needed). 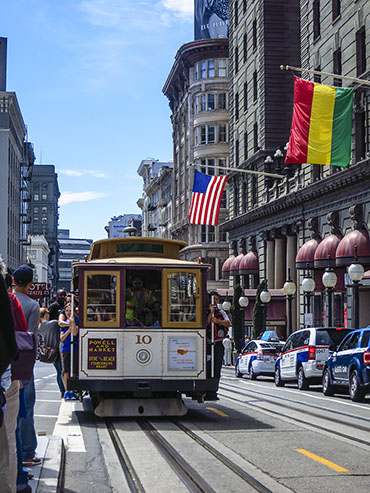 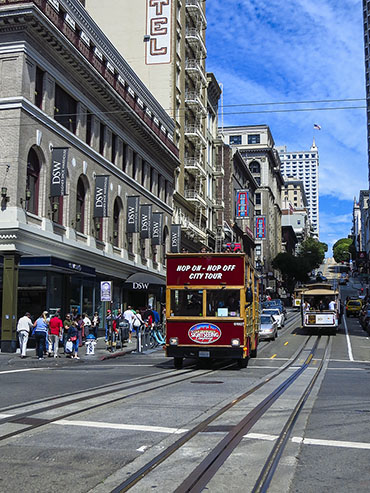 We relived our past wandering through Chinatown, which covers a decent section of the downtown area. 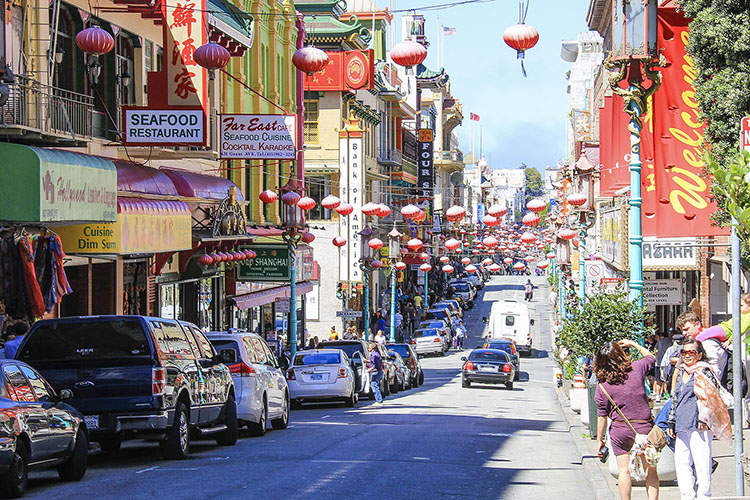 This also lead us to do very non-San Fran things like finding our favorite Japanese candies: Hi Chews! 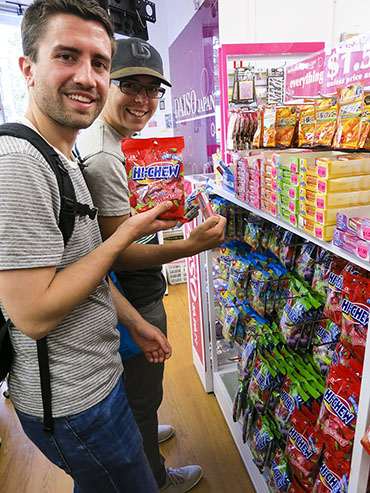 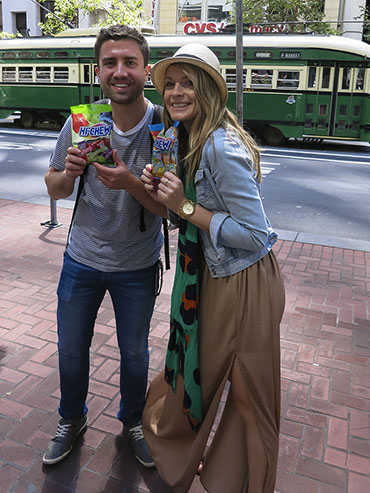 I’m starting to sound like a broken record commenting on all these apparently hilly cities I’ve been visiting, but I must say that San Fran beats all of the previous as of this moment. Some of the inclines seem fairly intense for a city, and I’m left uncertain of how these hills (cliffs?) are conquered by humans or cars. Thank goodness it doesn’t snow here. 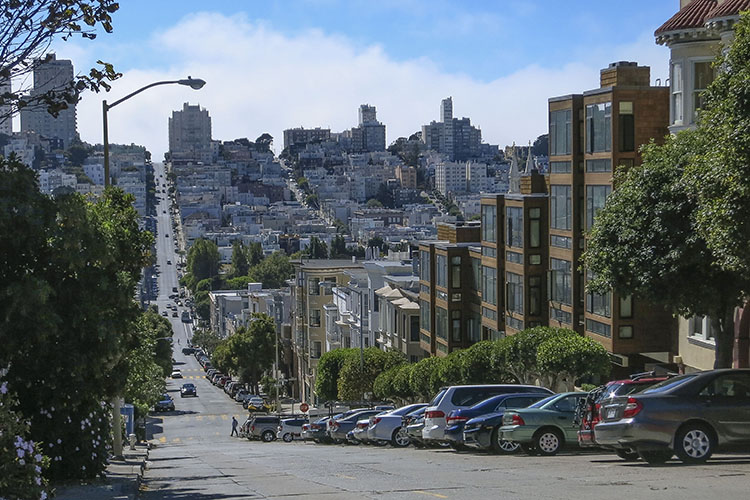 One of the silliest streets here is Lombard, that has a series of 8ish quick, sharp hair-pin turns. The pictures of it are terrible (I apologize) as unfortunately it has turned into a major tourist attraction and it wasn’t long before we all got super annoyed being there and ran away as quick as possible. 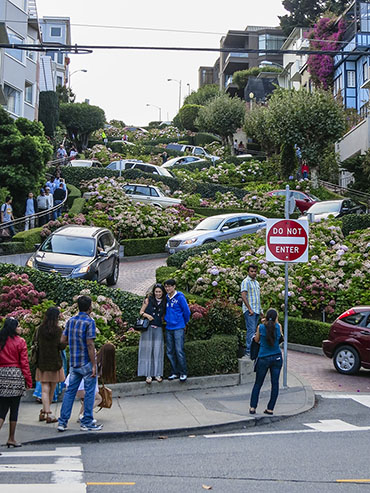 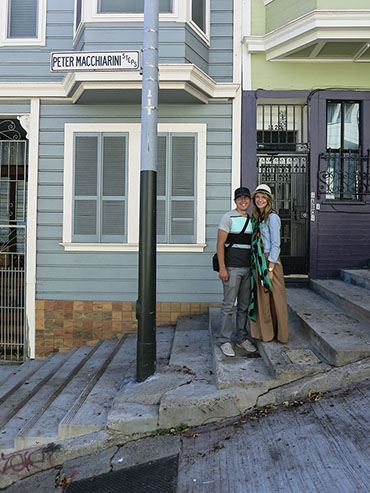 In case you didn’t realize this on previous trips by our travel trio, Shane and Andrew have a fascination with burgers. Thus, they always try the popular burger chains wherever we go. This has resulted in the usual consumption of large amounts of burgers, including one on the “late night munchies” menu at Jack in the Box in the middle of the night where the burger came with a grilled cheese sandwich as the top bun. It looked as terrible as that sounds. Not to mention a minimum of 4 trips to In N’ Out Burger so far… 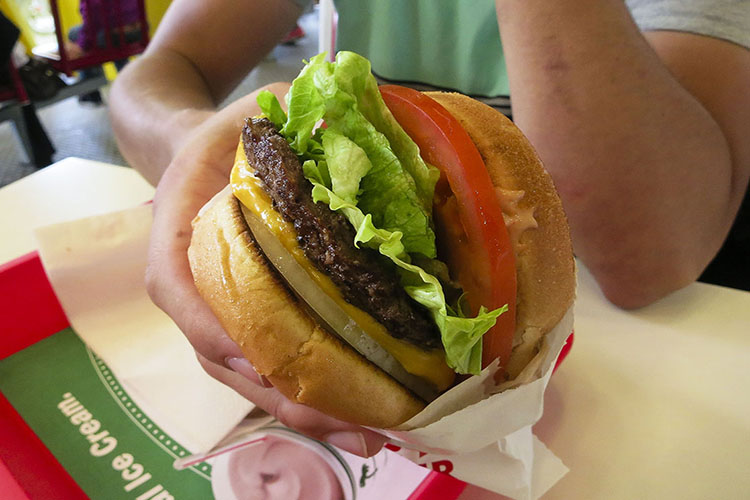 More on my side of things, Mexican restaurants here are a plenty, and tacquerias are an easy stop for some tasty tacos, quesadilles, enchilladas or more!

As un-classy as we can be at times, we still enjoyed a fun Saturday night at a popular and tasty wine bar called Amelie. 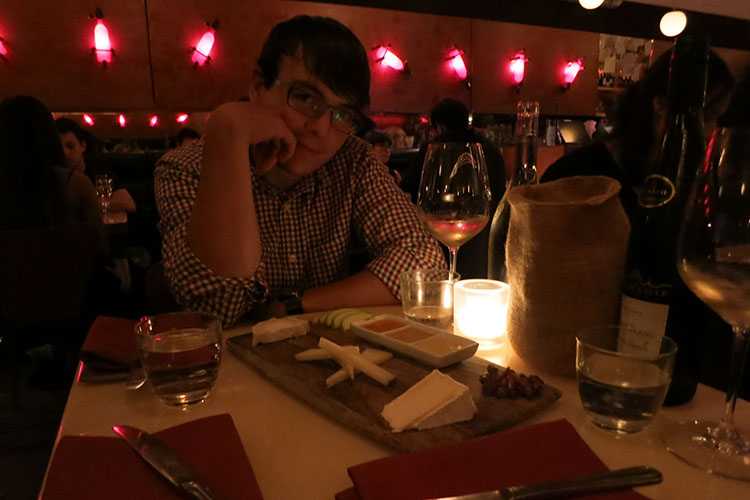 As a small side-note, license plates here are funny. You don’t have to have an official one for the first 6 months of driving a new car, which is interesting because then you end up seeing all these plate-less cars or ones with advertisements on them instead. Does that mean your speeding tickets for the first few months are “on the house”? That would be great… 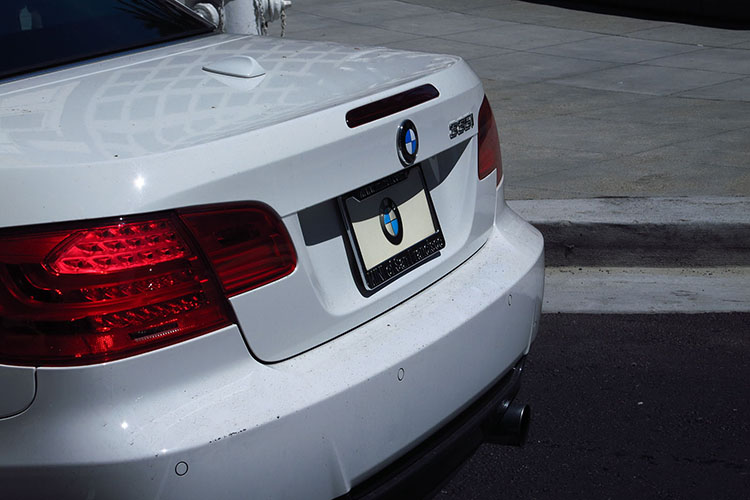 More importantly, you can put emoticons on your plates: 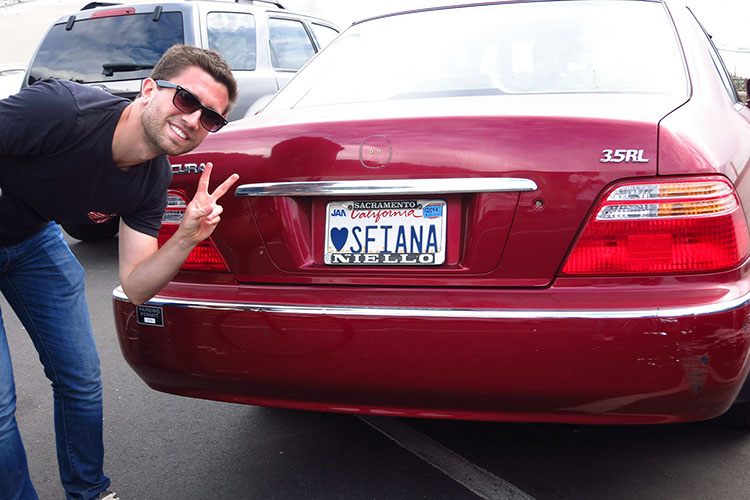 We were warned about San Fran weather before coming here:

It definitely has been more pleasant than that, with mostly sunny days and warm weather. However, evenings do get chilly quickly as the misty fog rolls in. To show you how moody the weather can be, here are some pictures we took of the Golden Gate bridge only an hour apart. One moment you’re shrouded by fog, and the next moment you’re bathed and burning in sunlight. 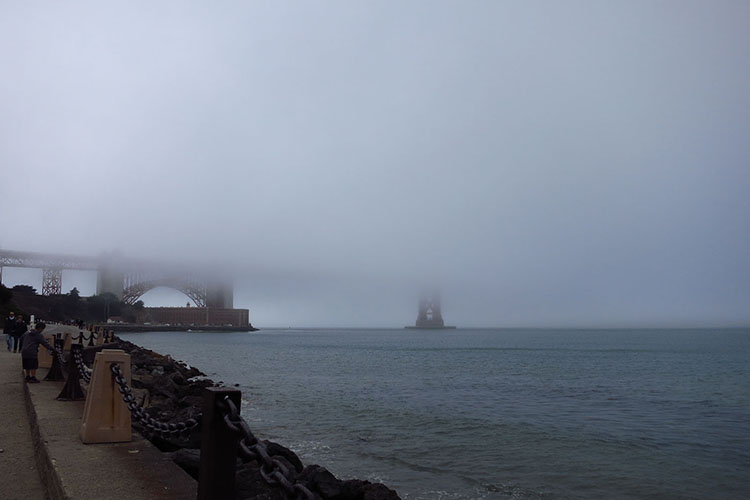 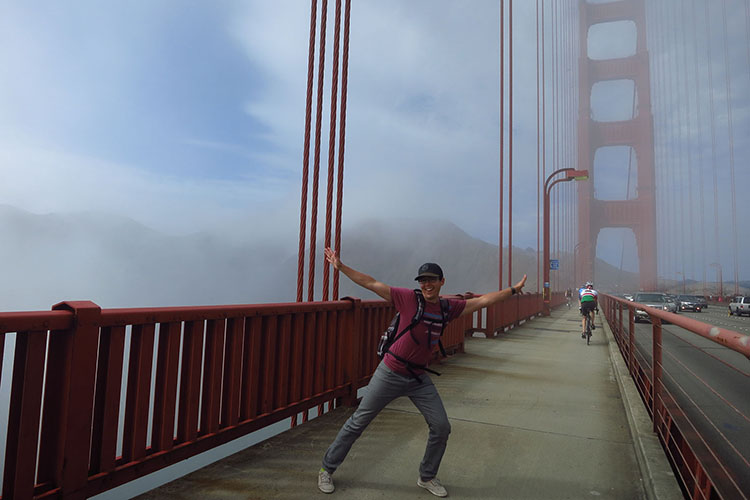 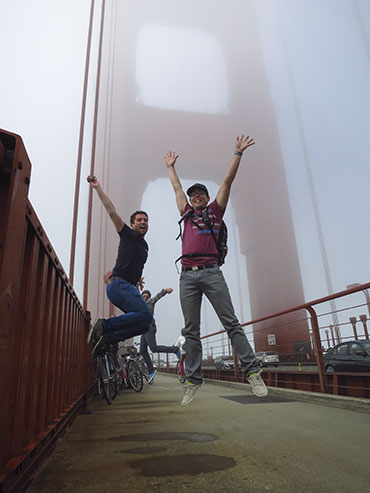 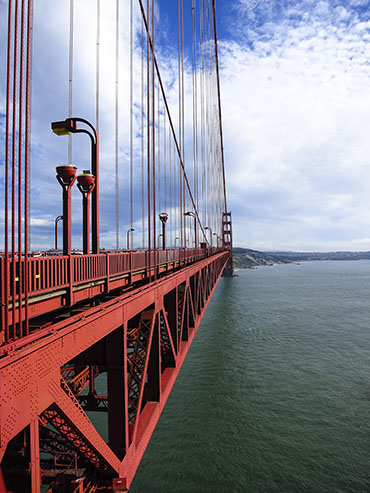 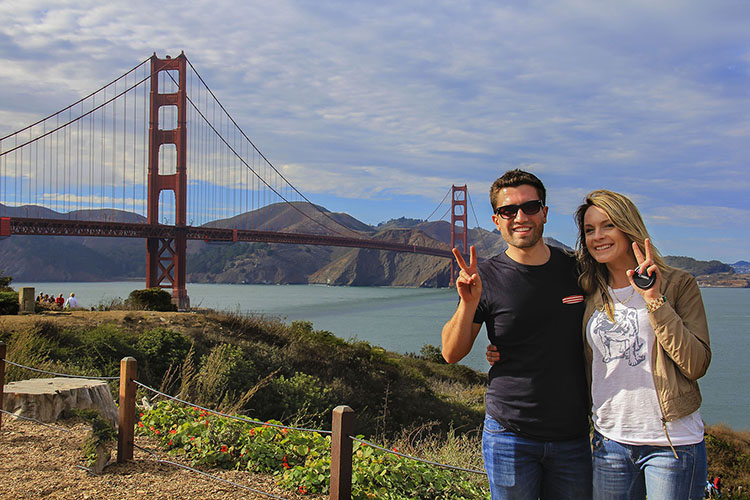 I must say there was something almost magical about the sky clearing and the massive bridge coming into view as we rode across it on our bikes. Suddenly the sky was blue, the sun was bright, and the enormous red columns loomed overtop of us. It was the first time we saw the bridge, and we were right on it! I think we all almost crashed our bikes together as we stopped in awe to watch our world come in and out of the fog.

Almost better than that was the bonus random man in the jump shot above. What a gem.

Off for some more adventures again tomorrow!