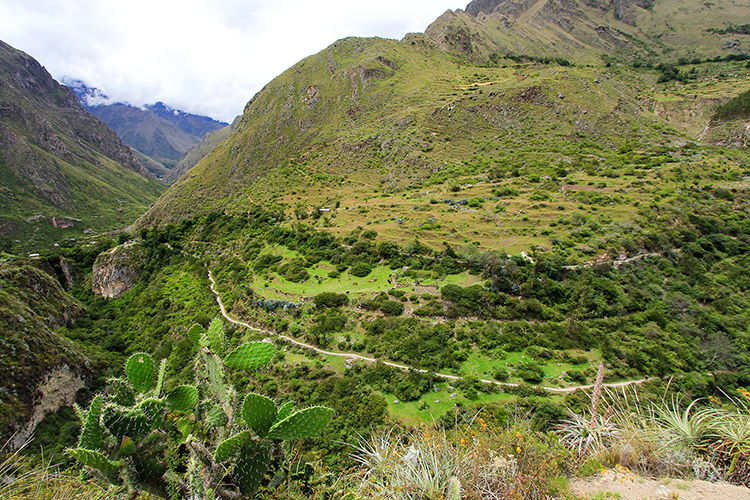 Welcome to our 4-day summary of hiking the Inca Trail to Machu Picchu!

Today the Inca trail is the most hyped trek in South America and known as one of the best hikes in the world. It is a 4-day, 45 kilometer hike through the Andes. It goes through various environments: from forested mountain terrain, to tropical jungle, to a cloud forest at elevations of 4200m. Intermixed are numerous Incan ruins and tunnels. The trail is known as stunningly beautiful, but also decently challenging.

Historically, the trail was really only one part of a vast system of roads the Incans built back in 1500. This trail lead from their capital city, Cusco, to Machu Picchu. When the Spaniards entered Peru and tried to rid it of Incan religion and culture, it is believed the Incans destroyed the road leading to Machu Picchu to keep them from finding it. Thankfully they succeeded!

Therefore, the trail and its surrounding ruins are some of the few Incan sites left in Peru. This is what made the discovery of the Inca trail and Machu Picchu so exciting!

Since this was the first day of the hike, let me set the stage. The hike starts at kilometre 82, where the driving road ends. As the amount of people that can hike Machu Picchu is limited (200 hikers per day, a limit set by the government in attempt to preserve the site), there is an intense gate here checking everyone’s tickets and passports to ensure you registered correctly 6 months ago. 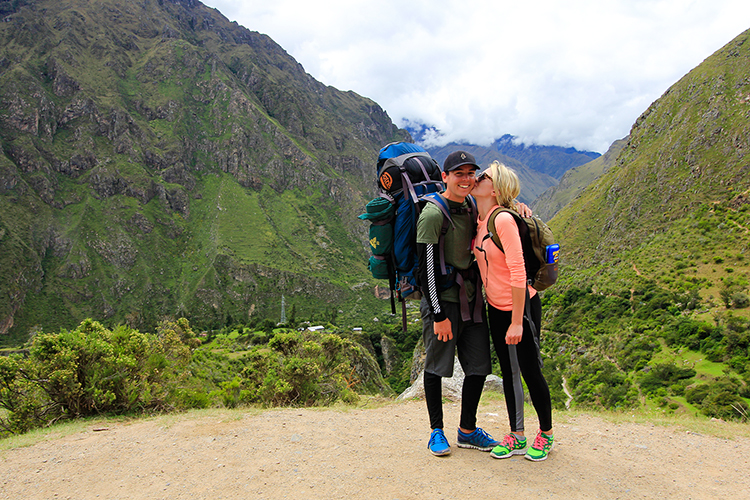 Once you cross the bridge, the Inca Trail has begun! 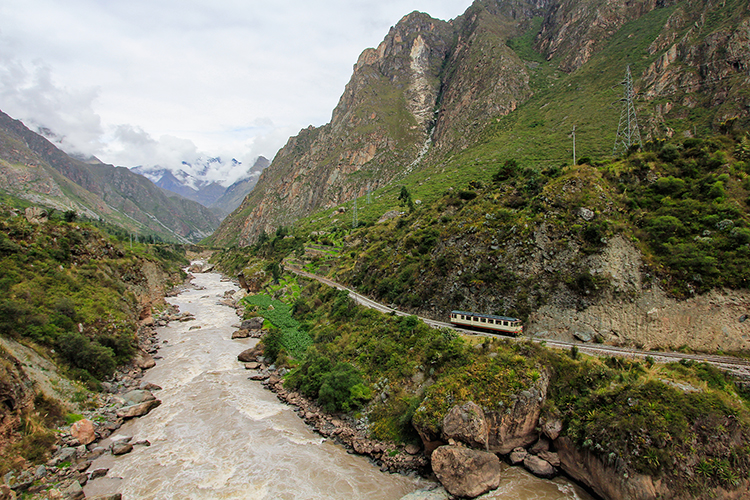 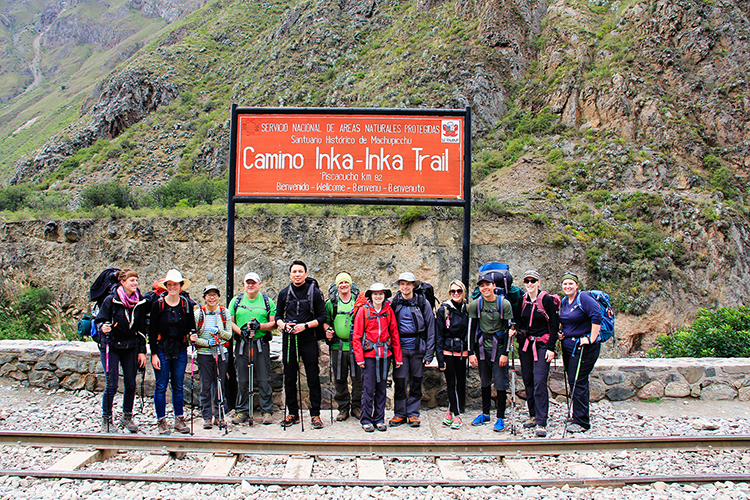 In our group, I’ll tell you just about a few highlights: A) Two Americans from Texas who brought enough gear for a 2-week trek out in the middle of nowhere: food rations, pots & pans, GPS, a projector to watch TV in their tent, and enough marijuana to keep them high most of the time;  B) Our oldest couple, friends in their 60’s who I let talk me into renting hiking poles on day one (#LifelongRegrets) and who brought oxygen for concerns over the altitude; and  C) Two pale Canadians who I don’t think hiked a day in their lives until this trip because they required multiple rescues and took 3 times the recommended length for every leg of the hike.

But as we slowly met other groups on the trek we realized we were quite lucky with ours. Other groups had the “Spice Girls”, two young British girls who sang the entire trek in shrill voices, as well as the “Whistle Man”, who brought an emergency whistle but decided to use it at his leisure multiple times a day. We wasted many hours of our trek conjuring up ideas on how we could rid of his whistle and throw it off the cliffside. 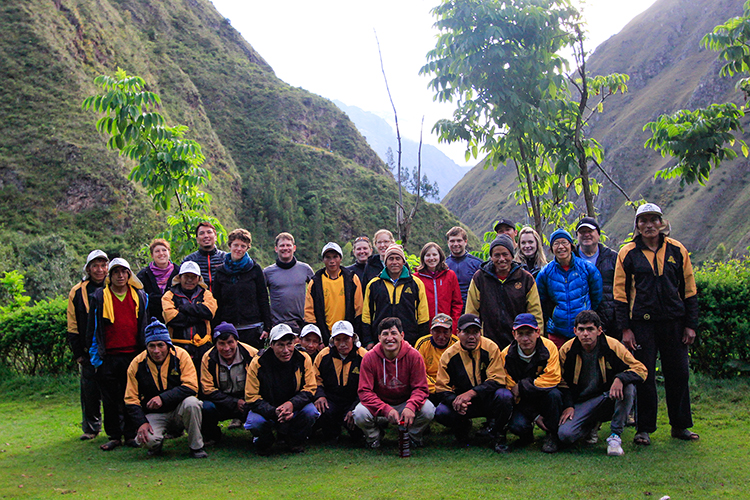 Other than that, we were with porters to carry all the stuff needed. These porters are men aged mostly from 40-60 who carry huge loads on their backs through the whole trail (ie. food, tents, cookware, etc). In recent years the government has become more strict about regulating their profession, so there are numerous checkpoints along the way checking their weight to ensure they are not carrying more than 20 kg. We felt bad enough about all their heavy labor, so we carried our own things.

The trail these days is so commonly used that facilities have really changed. People on the trail used to camp wherever they wanted. Now the government regulates specific campsites where tour groups can stay. This also means they have basic amenities like bathrooms (squatter toilets where you still have to bring your own toilet paper and soap) and sometimes terraces to set up camp. It was much better developed than I expected. Because parts of the trail also go through farmland, there are points to buy drinks and snacks until the third day when you get too far from civilization to find even that. 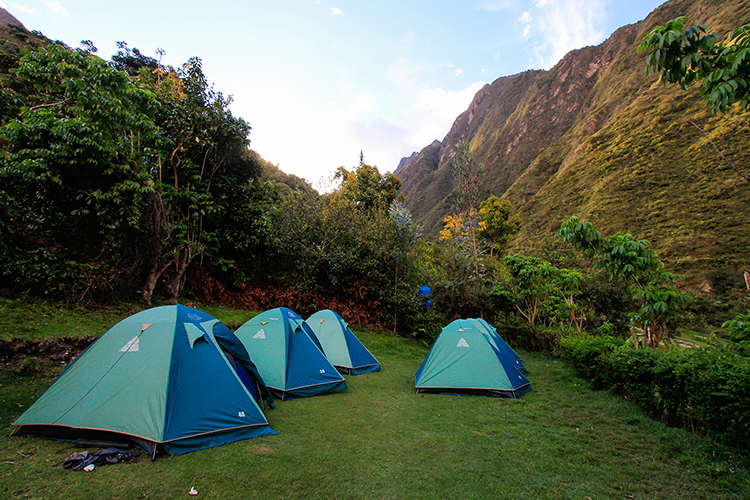 Now that you know the general stuff, our first day started quite easily with not much incline and mostly a smooth gentle rolling path. We even stumbled onto some of our first Incan ruins: 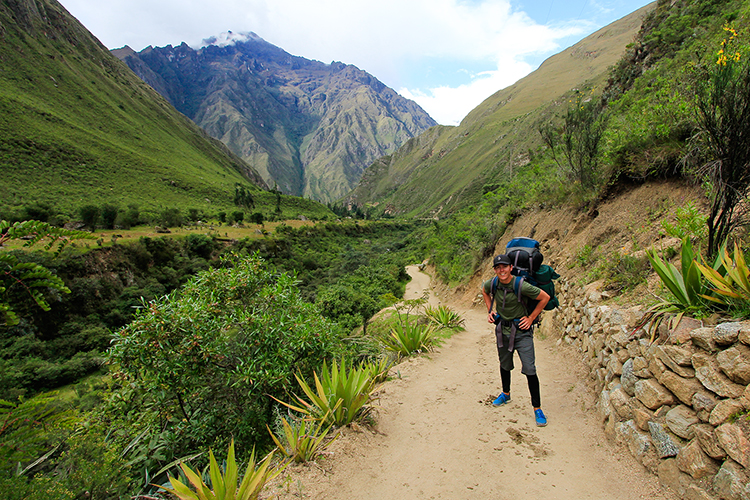 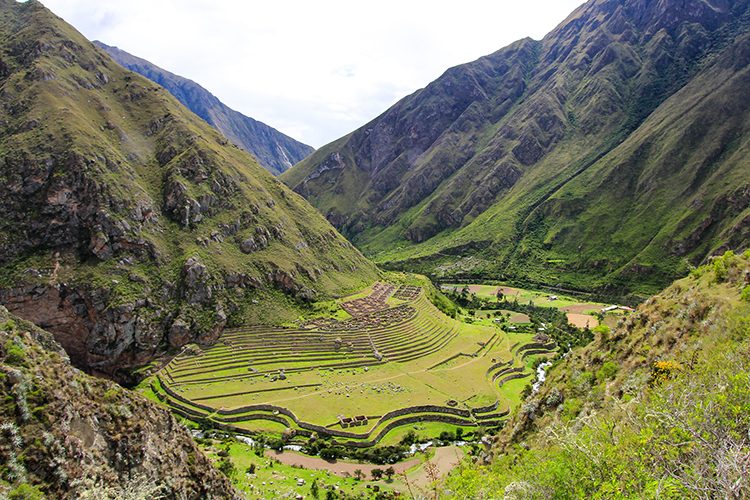 Our campground on first day was among one of these areas of farmland. This meant we slept together with the roosters, horses, dogs, and cats that all seem to live in harmony here. They weaved between our tents, and the rooster was sure to inform us in the morning when it was time to get up… 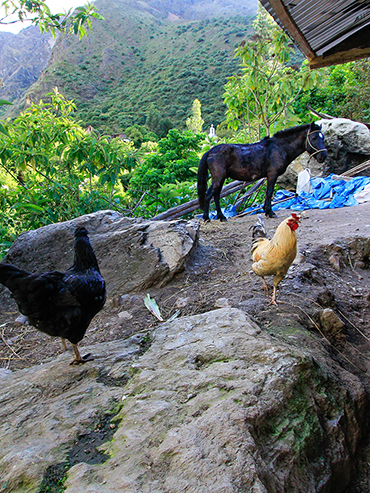 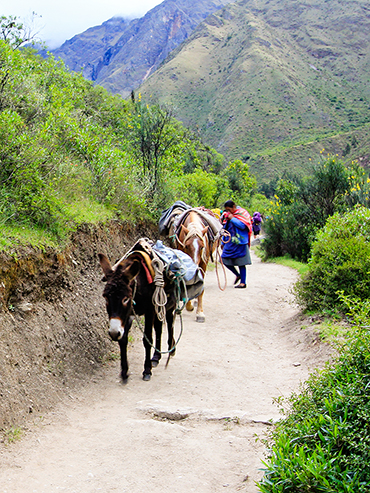 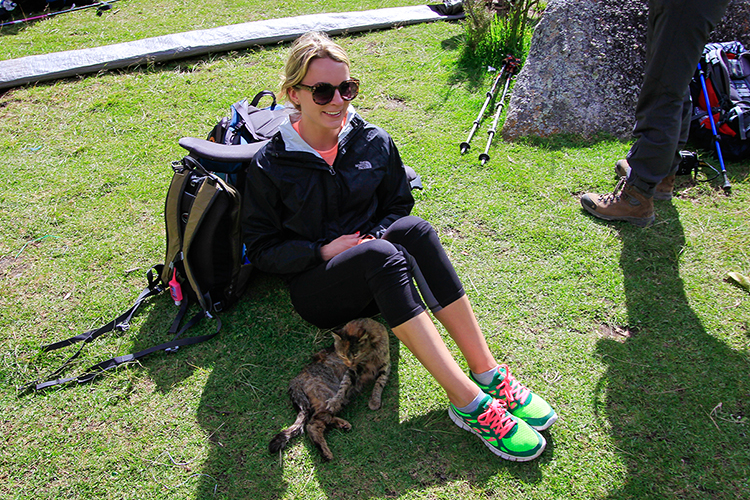 Day 2 has the reputation for being the hardest day. While yesterday felt like a walk in the park, today required mostly uphill trekking for about 5 hours. It was a fairly tiring day, climbing stairs and steep inclines. Heavy backpacks didn’t help either! Not to mention when you start the day with a donkey barrier: 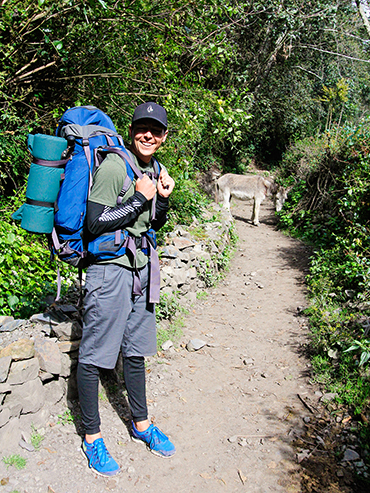 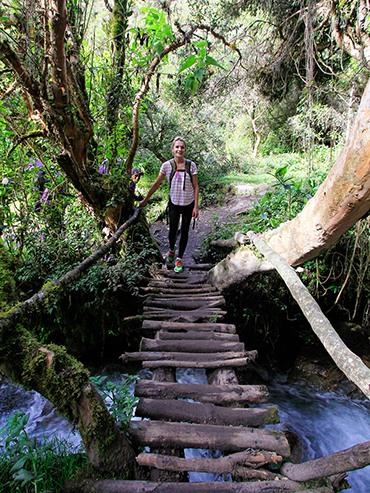 The Inca Trail goes over 3 seperate mountain passes in the 4 days, and so today we went over the highest: “Dead Woman’s Pass” at an elevation of 4200m. Some people struggled with the altitude, but having come from higher areas in Bolivia, neither of us noticed a thing.

However, on reaching the top of the pass, the cholitas took advantage of me being pooped, as I got suckered into buying a Kit-Kat bar that I later realized was $5 (while a stay in a hostel is about $10). 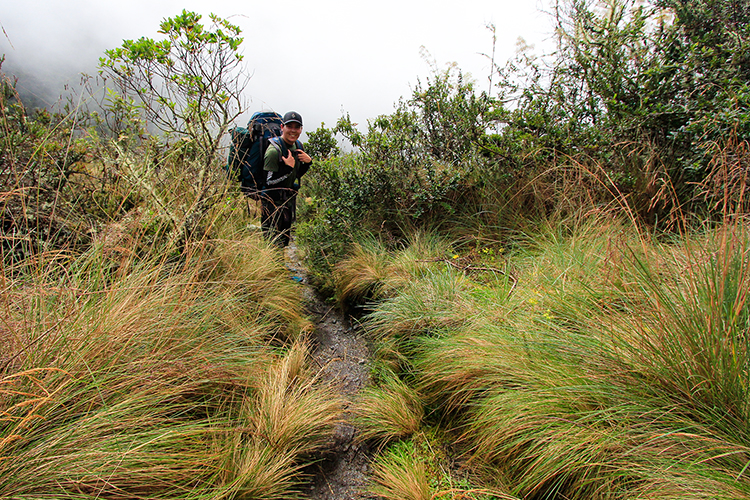 Thankfully our guides let everyone take their own pace on this day, as hiking uphill is variably challenging depending on your fitness level. While Shane and I got to camp fairly early (around 2 PM), some groups took until almost 6 PM. 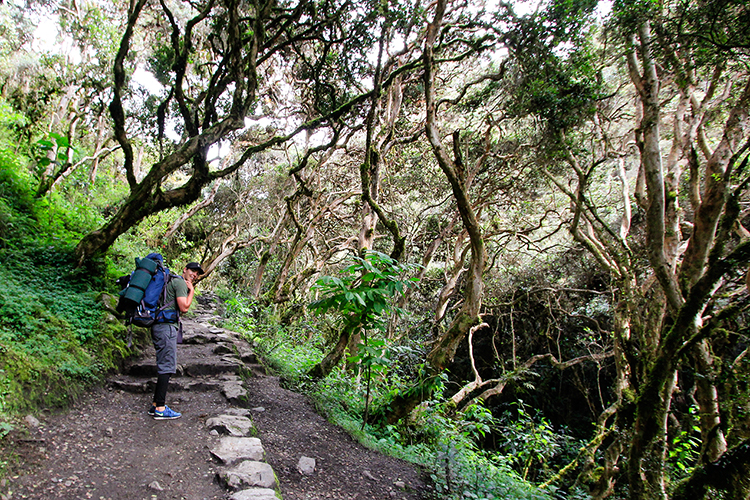 Our campground at the end of the night had quite the story around it. Rumor had it that it was built atop an ancient graveyard, and therefore many of the guides believe it to be haunted. There are various stories about seeing a woman’s ghost at night or dwarves in the bathroom. Some of the trekkers felt they wanted to take part, sharing stories of their own sights and sounds the next morning.

By the way, talking about death on the trail, we learned from our guides that the quoted deaths are usually due to underlying medical conditions, particularly heart attacks. It is very rare for a trekker to fall off the trail and get injured.

Day 3 was a fairly simple day. We hadn’t mentioned this yet, but unfortunately the last campsite for our trek was washed out in a landslide during the rainy season. Sadly this meant plans had to change.

Instead of staying at the washed-out campsite and hiking only 1 hour to Machu Picchu on Day 4 for the sunrise, it meant we had to camp way back. This meant a much shorter hike than usual on Day 3 as we didn’t have as far to go. The negative side was that since we were further from Machu Picchu, it meant our final day hike started at 2:45 AM. Gross.

Though this caused some contention among our group, our campsite on Day 3 ended up being quite beautiful. It was on top of one of the mountain passes, which gave us the feeling of camping in the clouds. 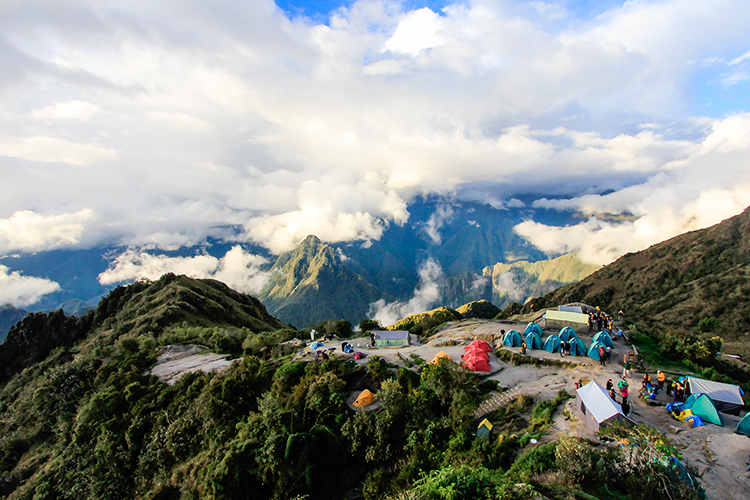 From this spot, we were able to watch the sunset over Machu Picchu mountain, knowing Machu Picchu city was just around the bend and we were almost there! 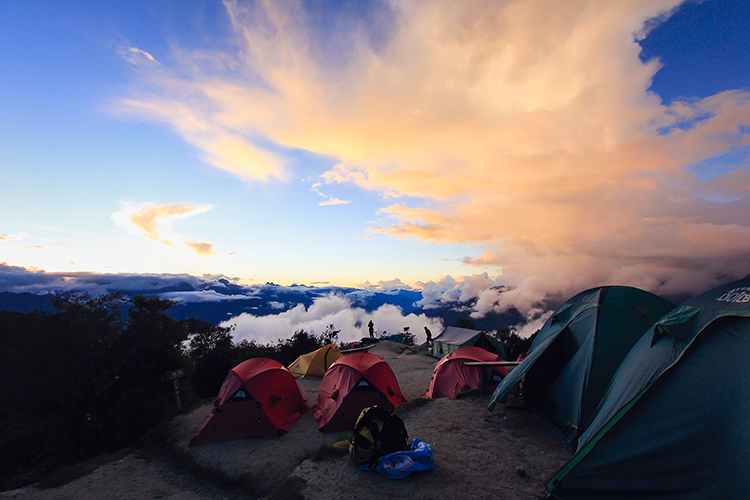 Day 3 was also special in that it was the first time we felt truly on our own. There were no more shopkeepers around, and we could only rely on water via boiling river water or using a water purification system. Bathrooms for the most part turned into nature. 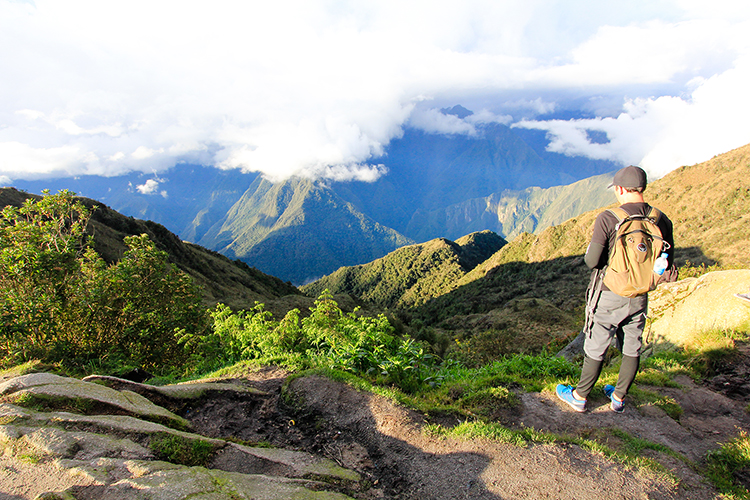 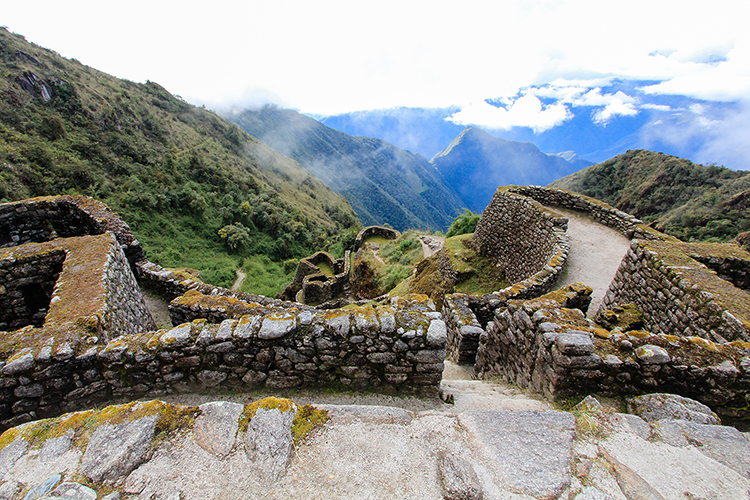 This day was also the first day we hiked on the original Inca Trail stones, as proven by archeologists. This path was impressive: with stones piled atop one another on mountain sides going 20 meters down at some parts. The path was also outlined by numerous wild orchids, making it quite a pretty site to see. Not to mention more impressive Incan ruins! 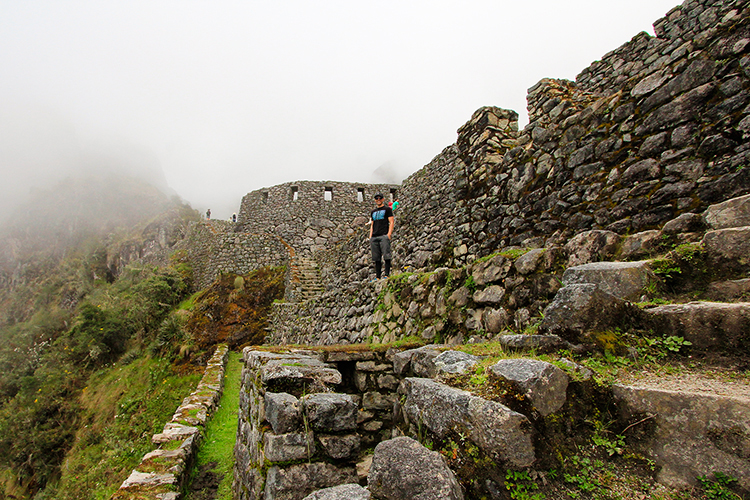 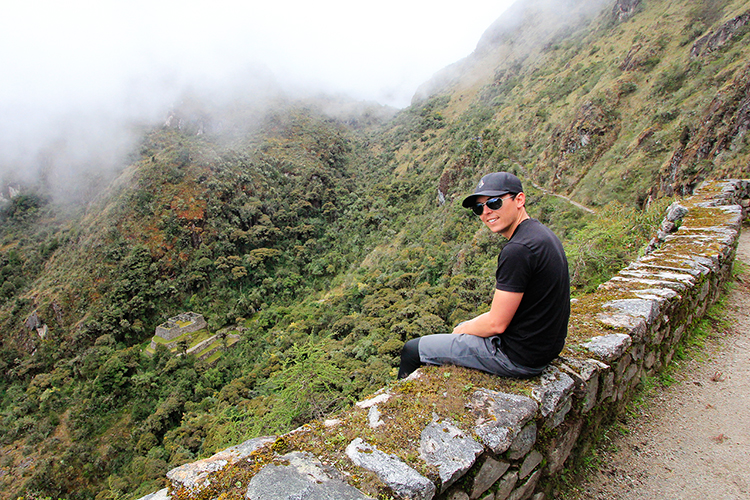 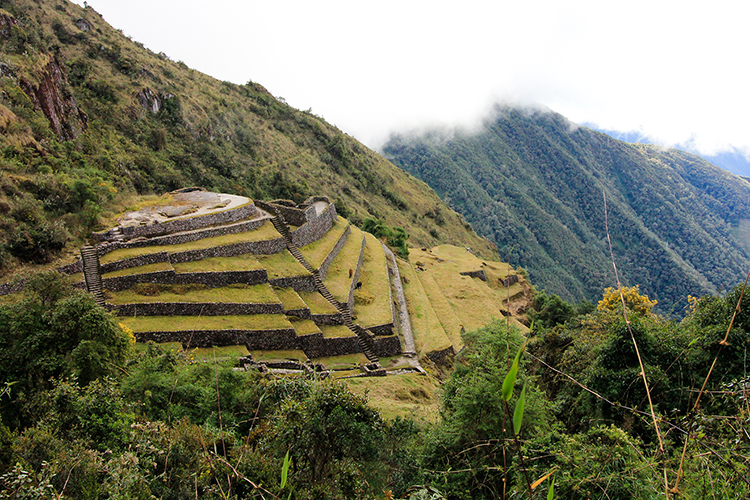 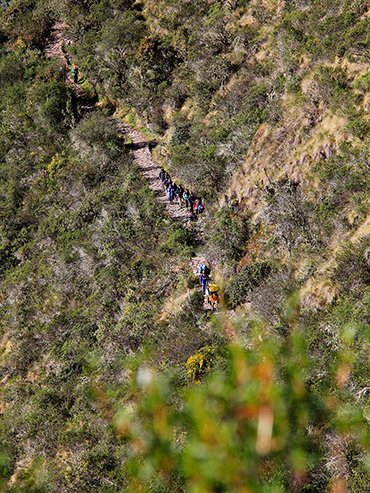 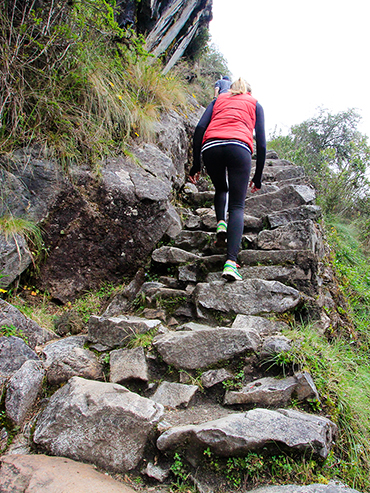 By the way, since I haven’t yet, I’d like to share that the food was fantastic! Despite camping conditions, our cook managed to create 3-course meals at every break with snacks in between. We had everything from fish to chicken to pasta to stirfry. We had appetizers like delicious guacamole, ceviche, and empanadas. Deserts included cakes, jello and chocolate. And on our coldest night we even had some rum to warm our souls: Macchu Tea, a concoction of rum, tea and lemon.

We thought with all the exercise we would lose some weight, but I’m pretty sure we came out with an extra pound or two!

As mentioned earlier, Day 4 started at the terrible hour of 2:45 AM. Ie: it was like we never went to sleep at all. What made it even more challenging is that we awoke to trekking not only the dark, but also in the pouring rain. Our little trail of headlamp lights wound down the steep Incan steps with only the sound of the rain and our plastic ponchos swishing about.

Several hours later, as the sun started to rise, Shane and I forged ahead of the group. After 4-days of climbing and sore legs, we took our final steep ascent to the Sun Gate where we got our first rewarding view of Machu Picchu. Somehow, the clouds and rain disappeared leaving only blue skies and sunshine for us to celebrate the end of our long journey…

But, that’ll have to wait till tomorrow… it’s bedtime for us now!

We booked our tour through PeruTreks. There are many different companies offering varying levels of service. PeruTreks is the most affordable and offers a fairly basic service. We were definitely happy with the quality of the equipment and the food however. The extra services you do not get are the “luxuries” such as included porters, hiking gear, and fancier outhouse toilets. We would recommend PeruTreks but I’m sure that no matter who you go with you will enjoy your time. Likely you will be most affected by the group of people you are with and the company has no control over this.

PeruTreks offers Inca Trail tours on Monday, Wednesday, and Friday departures only so you are more limited in this way also. They offer discounts for students.