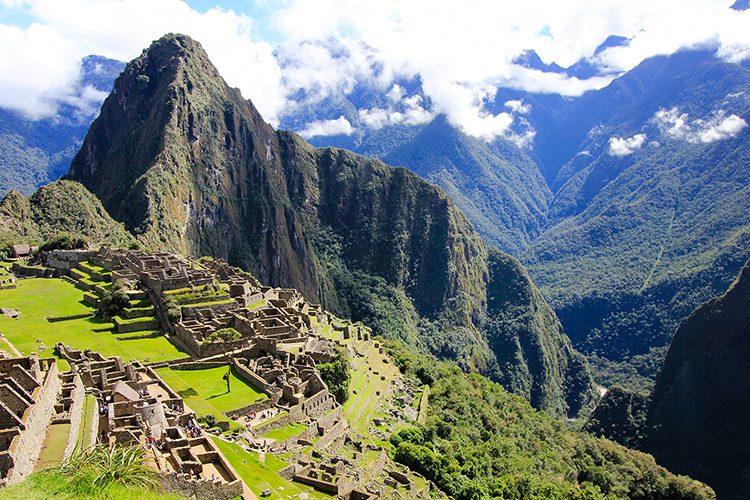 As we mentioned yesterday, we crested over the Sun Gate (on the summer solstice the sun lines up perfectly through this gate into the window of the Sun Temple at Machu Picchu) and our first view of the city of Machu Picchu came into sight in the distance: 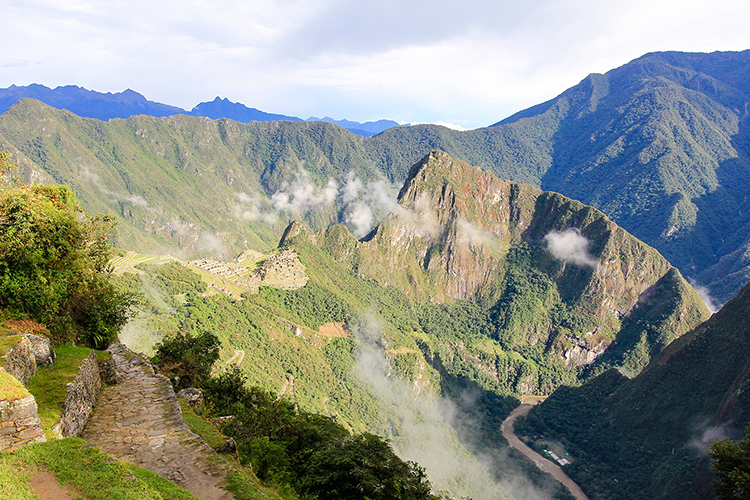 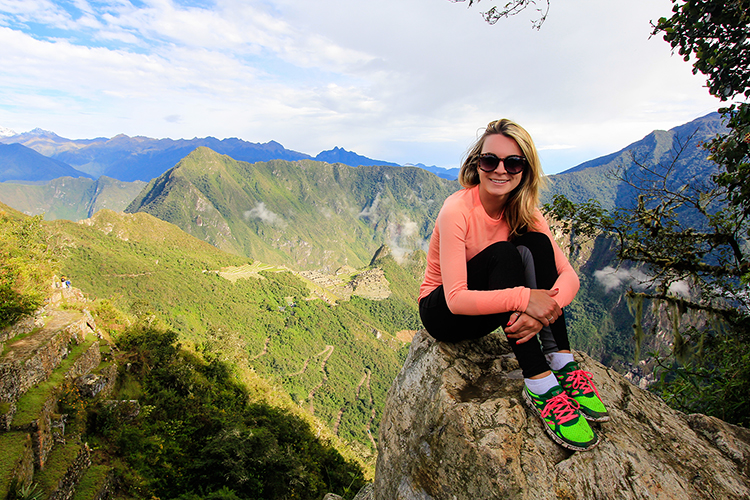 It was a beautiful and rewarding view, as our 4-day hike suddenly seemed so worth it. And how the sky cleared from its usual misty fog, I do not know… but I’m glad it did!

The unfortunate thing with huge tourist attractions is that by the time we got to the city, it was overflowing with visitors. It seemed almost overwhelming after our multiple days of solitude. And it’s funny how entitled you become after completing the trek, as suddenly it seemed frustrating to push our way through people who took a short bus ride up when we felt like we earned our time there.

Oh well, that’s a necessary evil when visiting world renowned attractions… there’s a reason so many are there to see it! 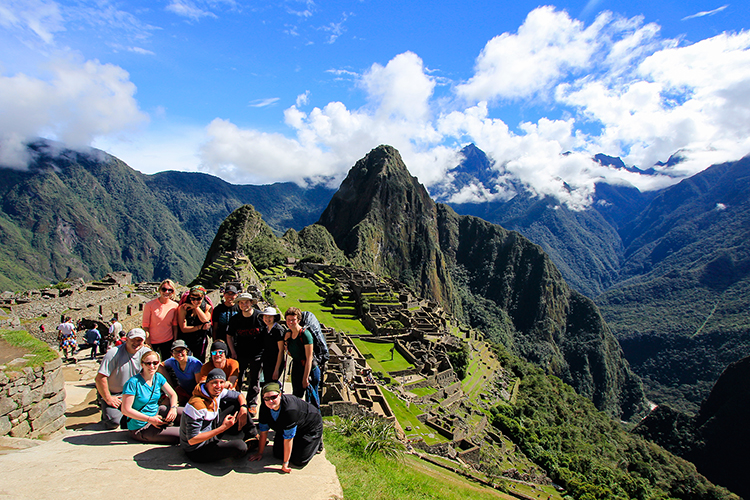 The Story Behind Machu Picchu

The history behind Machu Picchu is quite puzzling. Though it was part of the vast empire of the Incas, and believed to be a place only for the most special of people, much of Incan history and culture was destroyed when the Spanish arrived in Peru (forcing conversion to Catholicism). This means much about the Incas remains unknown.

This was very evident to us throughout the tour, as most of what we were told was speculation or part of a number of different theories. Maybe this was a temple, maybe this was for astronomy, maybe… The mystery behind the whole thing makes it quite fascinating!

How Was it Found?

Machu Picchu was actually known to a select few prior to it’s “discovery” in 1911 . In fact, families were even living on the site despite it being overgrown with bushes and trees.

Things changed when the city was brought to the world’s attention by Hiram Bingham. Though this American explorer was far from the first person to discover Machu Picchu, he had the backing and financial support of National Geographic to bring it to the world’s attention. There is lots of drama around this story as views on him and his “discovery” are mixed. 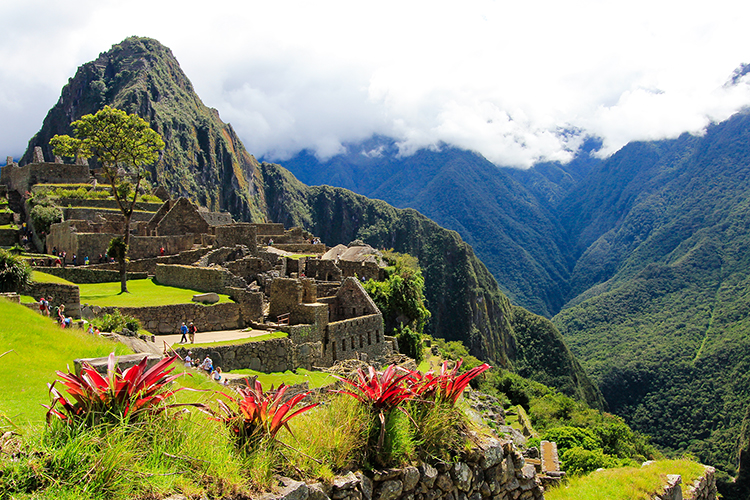 Either way, after his story went international, Machu Picchu opened its doors to become a worldwide attraction.

So What’s the Big Deal?

Hiram Bingham initially claimed Machu Picchu as the “Lost City of the Incas”. However, this is now felt to be untrue. A Lost City is still thought to be out there somewhere in the Andes. 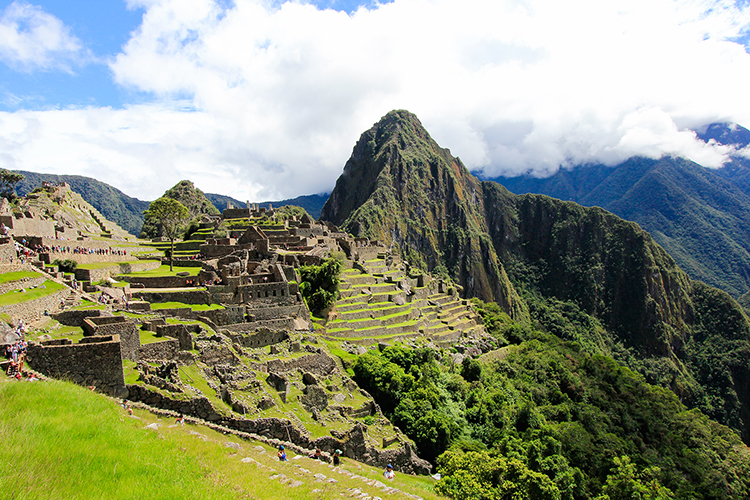 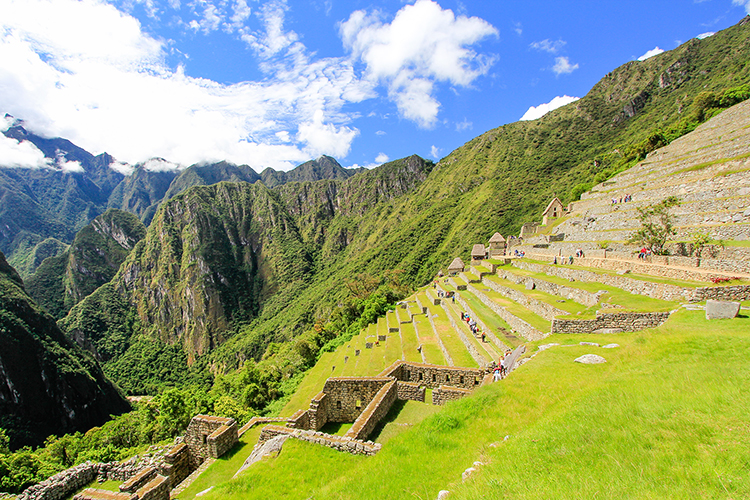 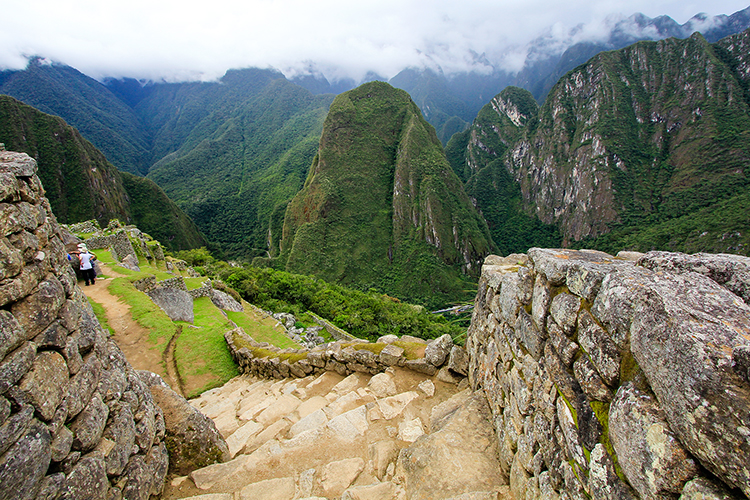 In today’s time there have been several discoveries of new trails in the Andes and even one claim of a city even larger and more magnificent than Machu Picchu. Unfortunately, the Peruvian government has halted any further attempts to seek these out in fear of them being destroyed by further tourism. Though I understand the concern, it seems a shame to miss out on potentially learning more about this mysterious culture!

As the Incas fled into the jungle after the Spanish arrival (and tried to destroy much of the Inca trail in the process, as I mentioned yesterday), there is bound to be some further Incan developments further into the Andes. 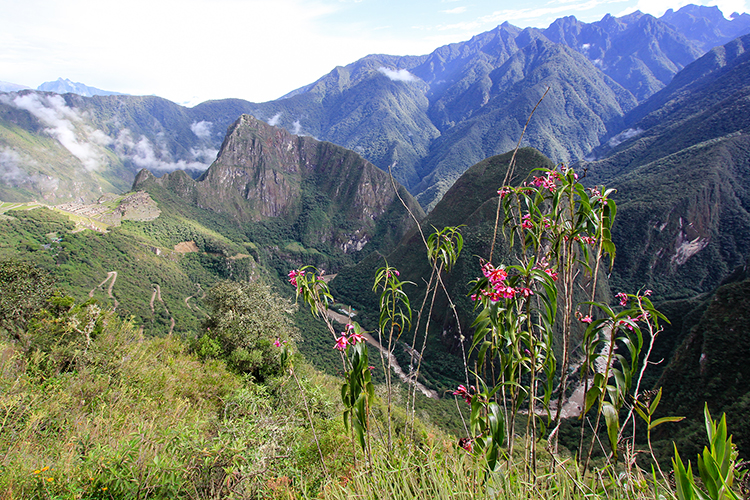 A Feat of Engineering

Part of the big deal surrounding Machu Picchu is how it was built. The Incas mastered the technique of polishing large stones until they perfectly fit next to one another. No mortar was used to keep the stones together, yet they fit so snuggly that not a sheet of paper can slide between them. And they happen to be more earthquake resistant too!

Walking through Machu Picchu, at least 9 different walls are visible. The smooth, symmetrical bricks were used for important buildings like temples. We got more distracted by these Flintstone walls we found: 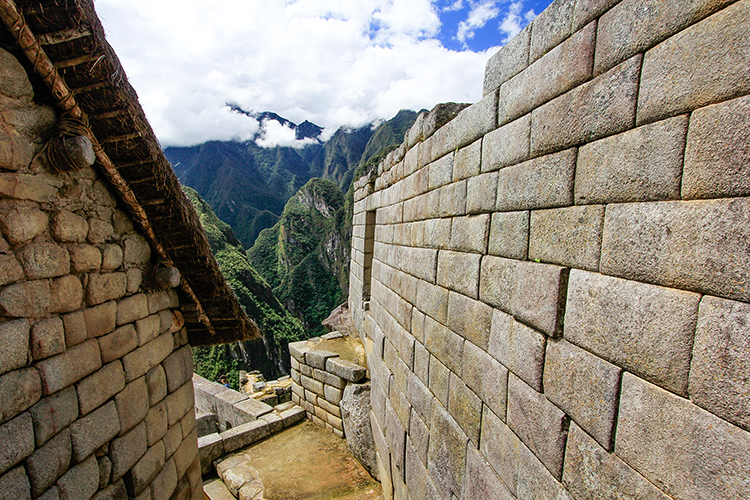 In case you haven’t noticed the giant mountain behind Machu Picchu, this is Wayna Picchu (“Young Mountain”). It is often featured as one of the word’s most dangerous treks, due to its steep trail perched precariously cliffside, so we signed up to do it! 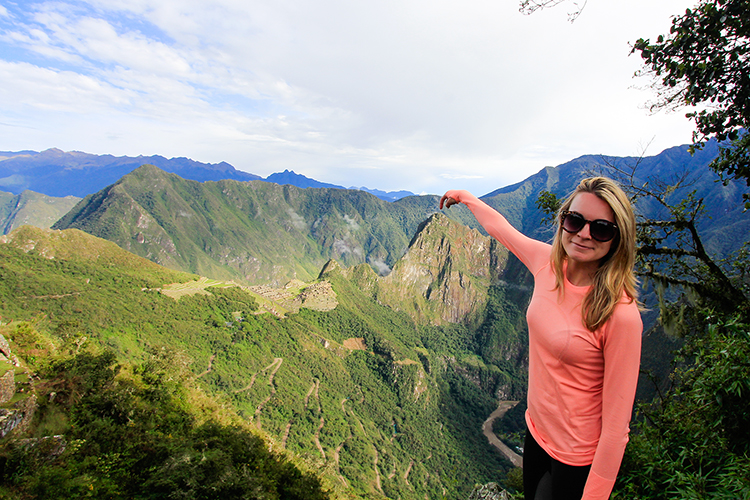 We returned the following day to Machu Picchu city shrouded in clouds and on the verge of rain… how lucky we were to have that beautiful sunny day before!

The hike was adventurous (though didn’t feel anywhere near as dangerous as all the hype) with steep stairs and narrow tunnels. 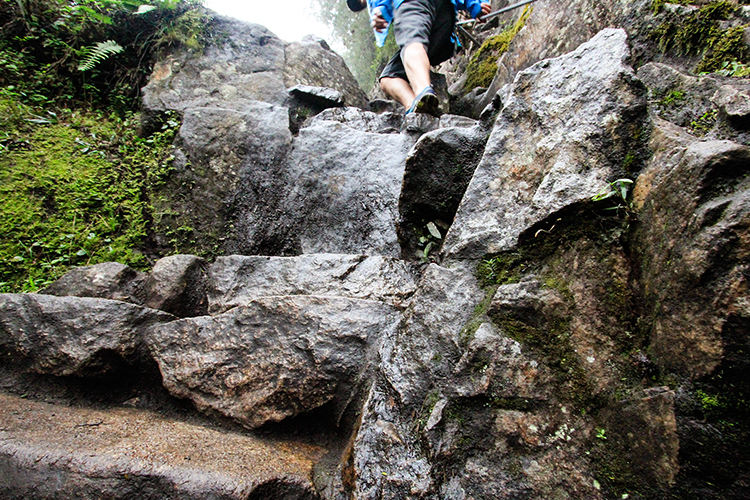 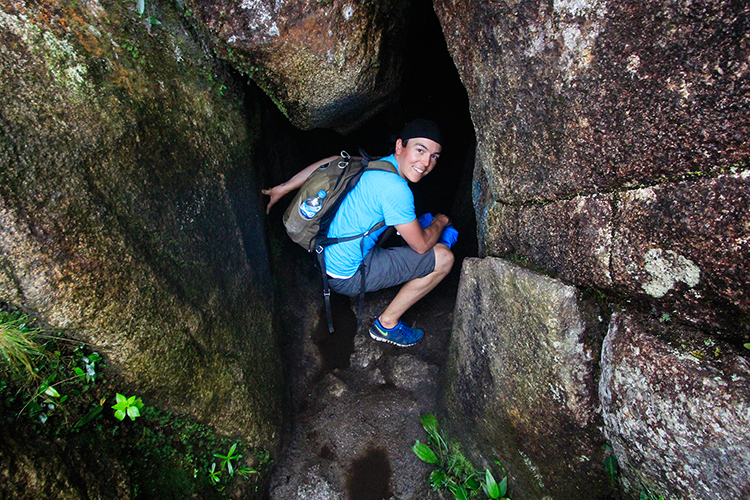 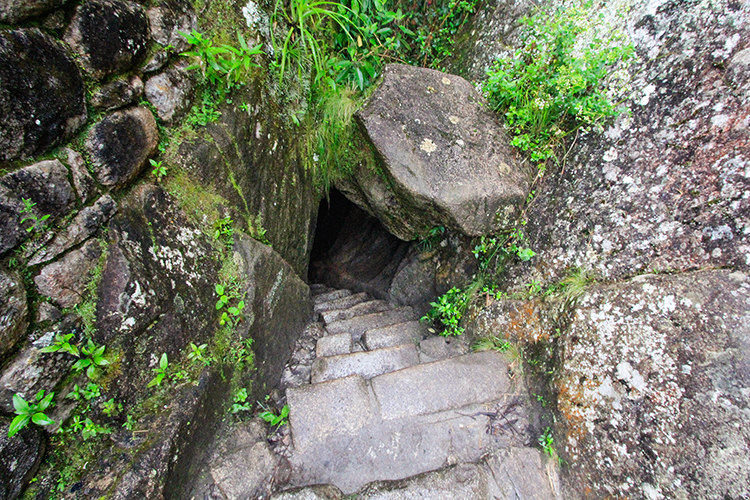 What was slightly less exciting was reaching the top and staring into the cloudy abyss, our views of Machu Picchu and Huayna Picchu hidden: 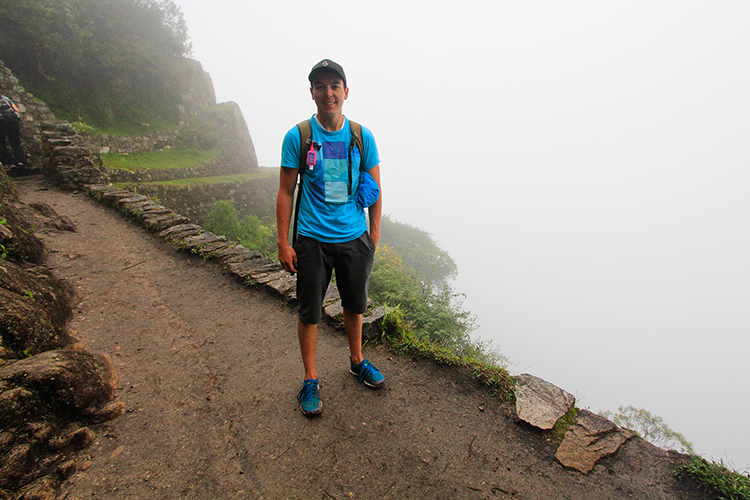 As our descent began, the rain started to pour and the whole mountain turned into a giant waterfall. Us and the other climbers headed down, clinging to the mountainside, our shoes soaked in the torrential downhill river that had now formed. By the time we reached our hotel, we were soaked from head to toe and begged for a room to shower in. They gave us someone else’s used room… a little weird, but we took it for a quick change of clothes.

In summary, our time on the Inca Trail was really a once-in-a-lifetime experience. Though the overall set-up of the hike is not our style, as we prefer to go at our own pace and at times found this frustrating, we really can’t imagine seeing Machu Picchu without doing the Inca Trail.

Though there are numerous other hikes offered today to reach Machu Picchu city, it seems a shame to miss out on the Incan ruins and seeing the beautifully created original Inca Trail. Every site along the way leads to an overall better appreciation of Machu Picchu once you arrive there. 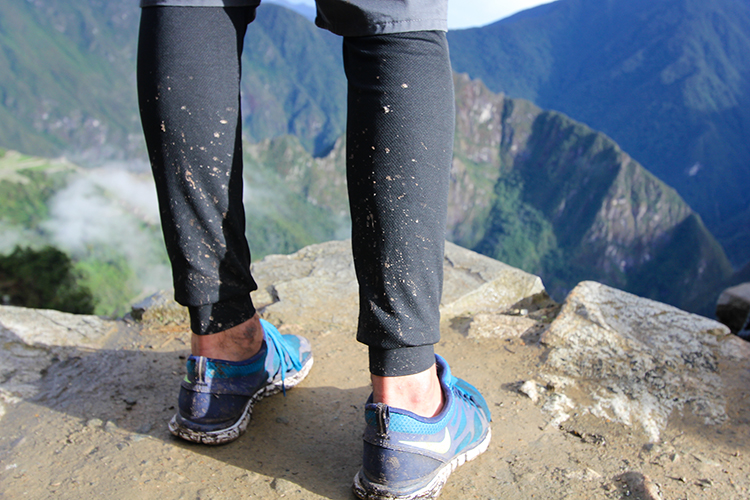 In order to hike Wayna Picchu you need a special ticket that allows entrance into Machu Picchu as well as Wayna Picchu. There are two times that you are allowed entry into Wayna Picchu: 7:00am-8:00am or 9:00am-10:00am. This ticket can be purchased from tour operators in Peru or online in advance from the Ministry of Culture website (recommended). There are multiple trails on the mountain so the length of hike varies depending on what you do. The area must be vacated by 2:00pm, and is also subject to close depending on weather conditions.