La Paz: City in the Sky

Rarely is your first sight of a city one you’ll always remember. With our first look at La Paz, my jaw dropped and Shane and I simultaneously said “wow”. Our breath was taken away.

Driving to La Paz takes you through the flat sprawling city of El Alto, an extension of La Paz that was recently named its own municipality. We kept waiting for the city to morph into La Paz inconspicuously, like most huge capital cities do with their numerous surrounding boroughs. Instead, the flat plains suddenly gave way to a huge and dramatic valley that is home to La Paz, it’s buildings filling every possible opening in the valley and even spilling over the edges. It’s a sight to remember! 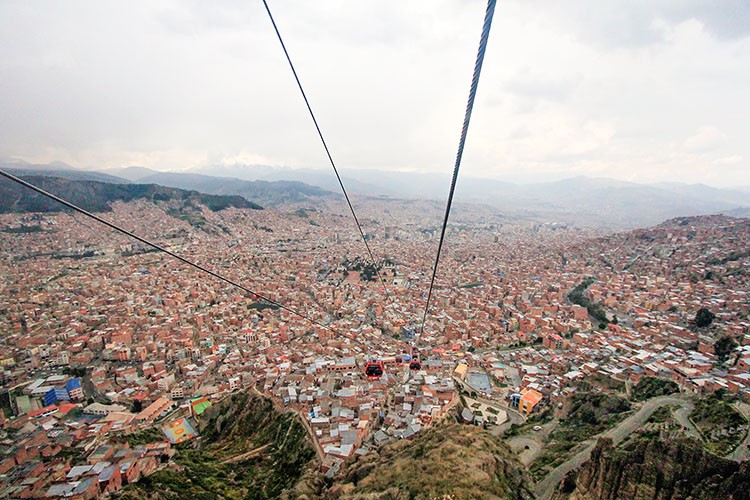 City in the Sky

Our travels up until now have been slowly taking us to higher elevations, now reaching the world’s highest capital city of La Paz (at an elevation above 4000m). 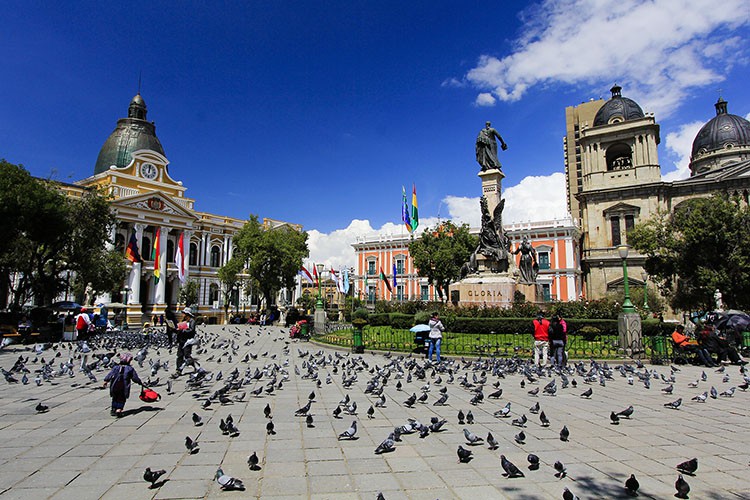 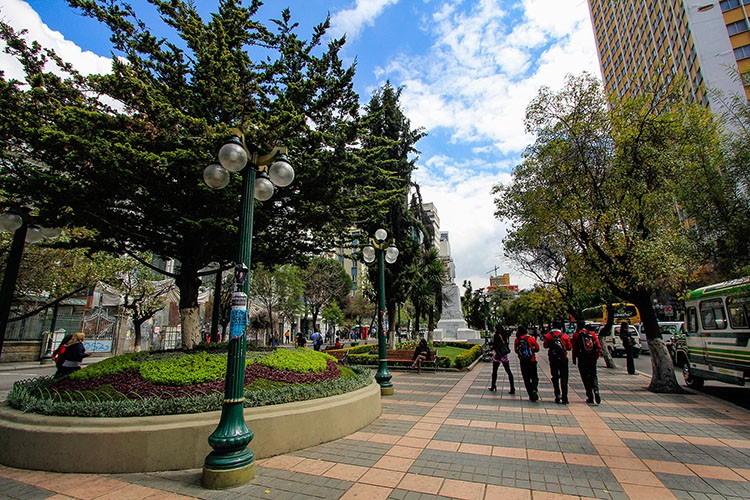 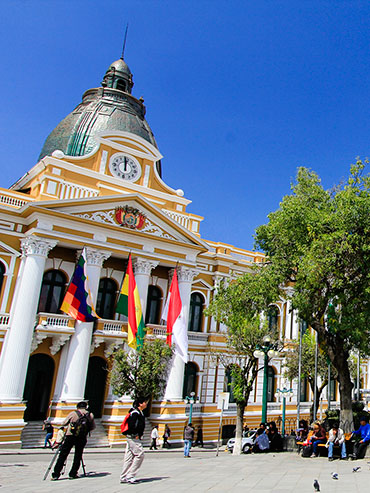 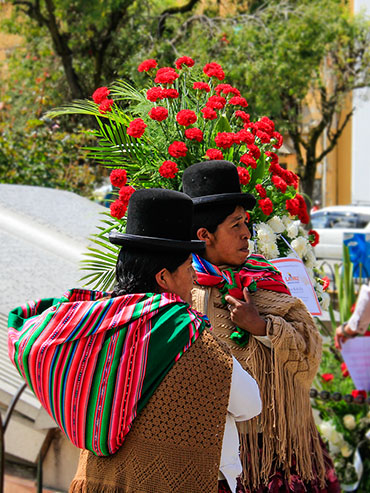 Coming here we read numerous stories about travellers being hit with incapacitating altitude sickness, or barely being able to walk up La Paz’s hills without huffing and puffing. We were prepared for the worst, but thankfully haven’t noticed much other than the air feeling “thin” with a deep breath in. It’s hard to describe until you have experienced it.

We have however, noticed the sun. Being so much closer to the sun we are at risk of being burned despite the cooler temperatures. Sounds silly since 4km is not that much closer, but my forehead burned the first day we were out. No wonder we watch people here slather on sunscreen regularly.

In order to battle the altitude, we have noticed oxygen tanks everywhere for visitor use. Aboard our bus to Bolivia, on our boat in Copacabana, and even within our accommodations there is always an oxygen tank available. 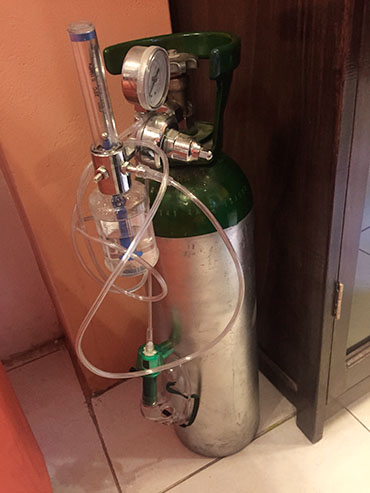 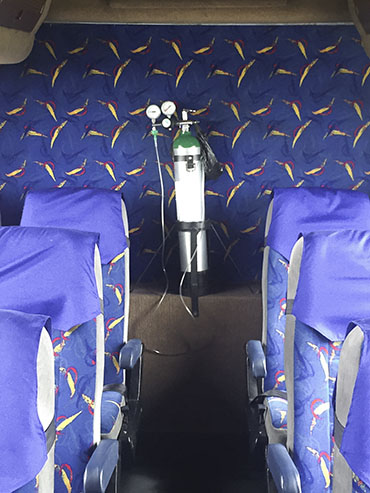 The other popular way to deal with altitude here is coca tea, a tea made out of coca leaves found only in South America (partly because it is illegal in other parts of the world, as its leaves are the base ingredient of cocaine). Coca’s stimulant properties increase your blood pressure and it is therefore believed to alleviate altitude symptoms, but this hasn’t been well studied. Though we are frequently offered it in tea form as tourists, locals here are often found with a wad of it stuffed in their cheek like chewing tobacco.

Beyond just the altitude symptoms, there are some other negative effects of such high elevations. People living on the altiplano are much shorter than their sea level counterparts. Their hair and skin is darker to protect from the sun. The high altitudes also mean vegetation struggles. Other than around Lake Titicaca, whose humidity provides lush greenery to the surrounding area, most of the landscape is quite barren limiting food choices. 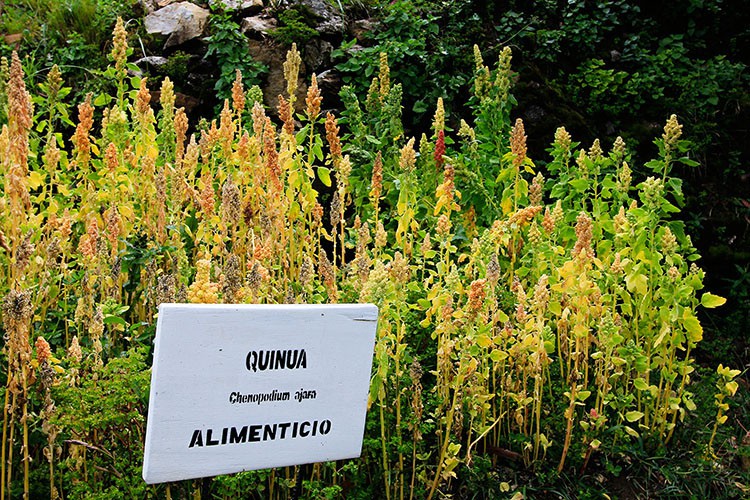 That being said, there are foods like quinoa that can only grow above elevations of 3000m. The people take advantage of this and thus many foods are made of quinoa here: drinks, soups, breads and chocolate cakes. So on trend without even realizing it.

The Valley of La Paz

Back home it is common for the wealthier populations to live up in the hills, enjoying their nice views of the surrounding areas. Here it has been the opposite: the affluent live in the lowest part of the city while the slums fill the surrounding hills. Why is that? 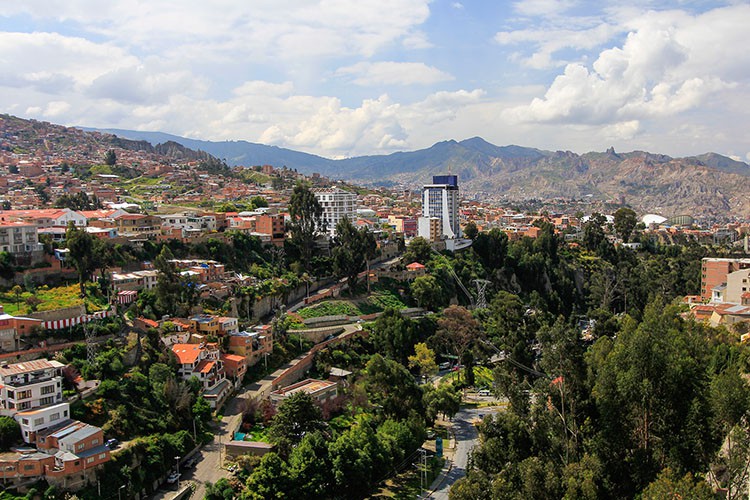 It’s because of the elevation of the Andes: the lower you go, the warmer the weather. La Paz is a perfect example of this: a city squeezed into the valley where the rich hotels and fancy homes sit at the base of the canyon along the river, while makeshift brick homes cling precariously onto the valley walls. 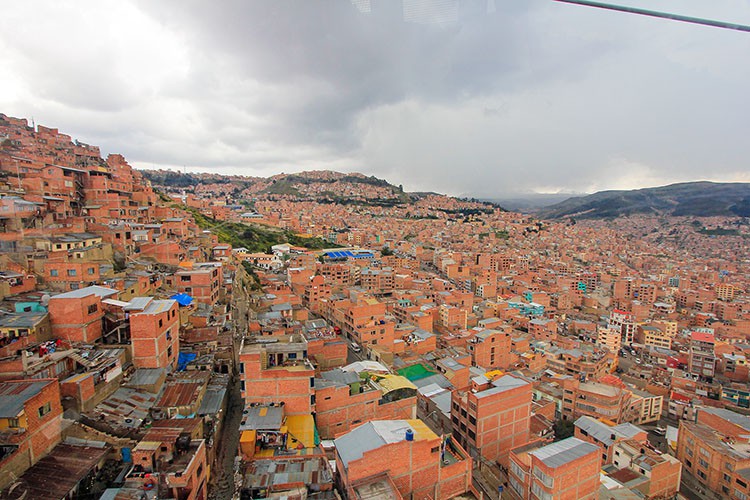 Travel is a nightmare within the canyon since there is only one main road through town. To combat this problem, the city came up with a brilliant solution: it has started to build several lines of cable cars (made in Austria) to bring people from the core, up out of the valley, and into the outlying areas. We rode on one of their first lines, less than a year old, and were able to appreciate the sprawl of the city with the Andes in the background.

One of the other challenges of living in a city within a valley is that one rainstorm means that sidewalks become small torrential rivers:

There are some main supermarkets in La Paz, but most of the shopping appears to be done in the streets. No matter how narrow the street or sidewalk, numerous roadside shanties are set up selling anything from vegetables, snacks, to toilet seats and lightbulbs: 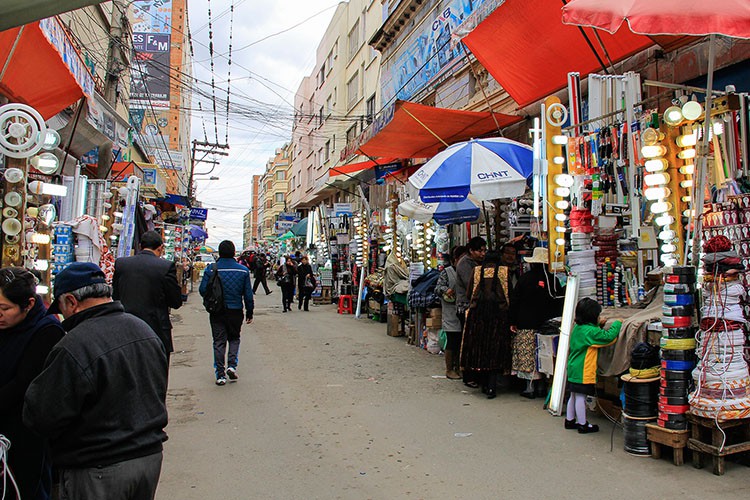 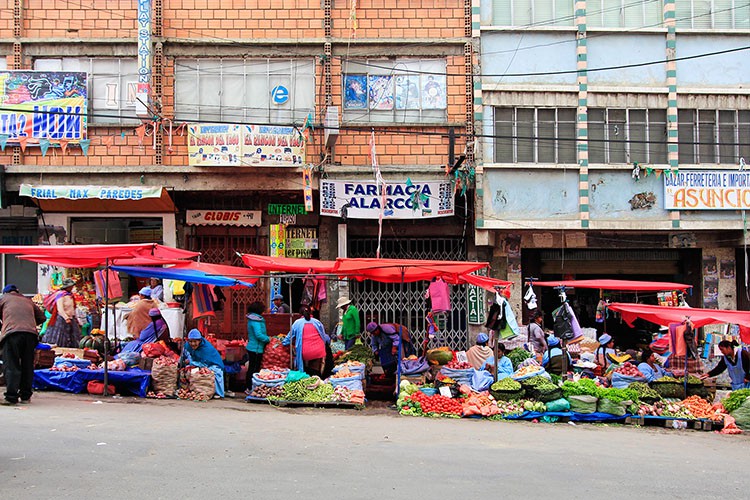 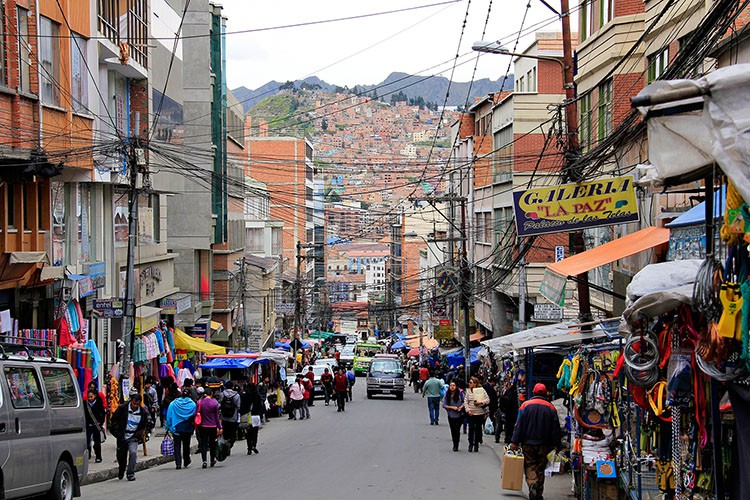 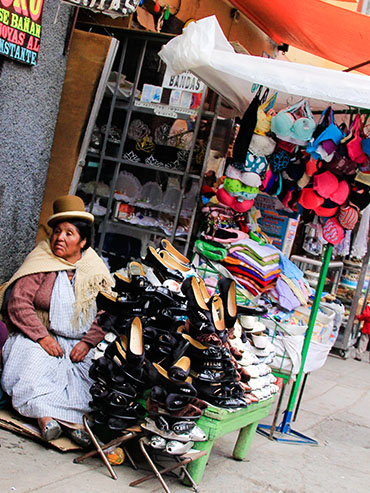 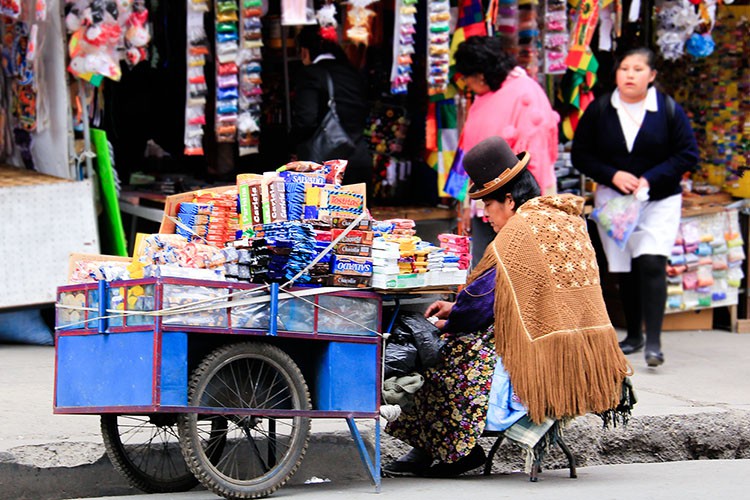 One of the more notable markets in La Paz is the so-called Witches Market. These vendors sell herbs, folk remedies and other items that affect the spirit world. One such item is the llama fetus. These are buried under new construction as a sacrifice to their goddess Pachamama in hopes of keeping workers safe from accidents and bringing good luck to the business. Witch doctors can be seen wandering through the market as well with their dark hats and pouches full of magical trinkets, offering fortune-telling services. 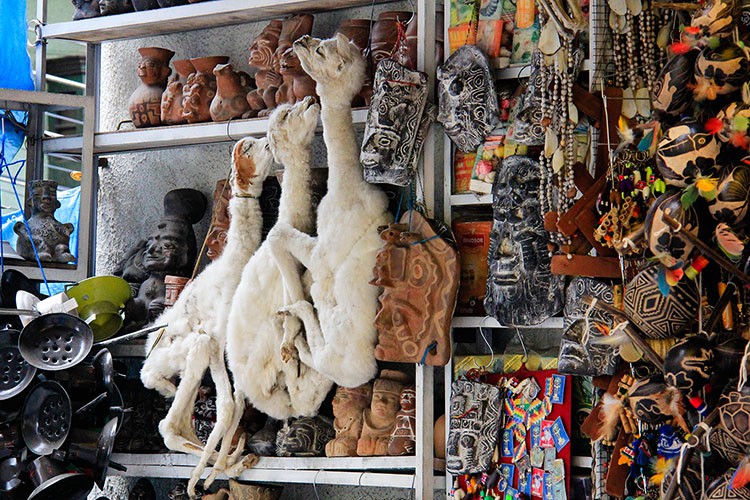 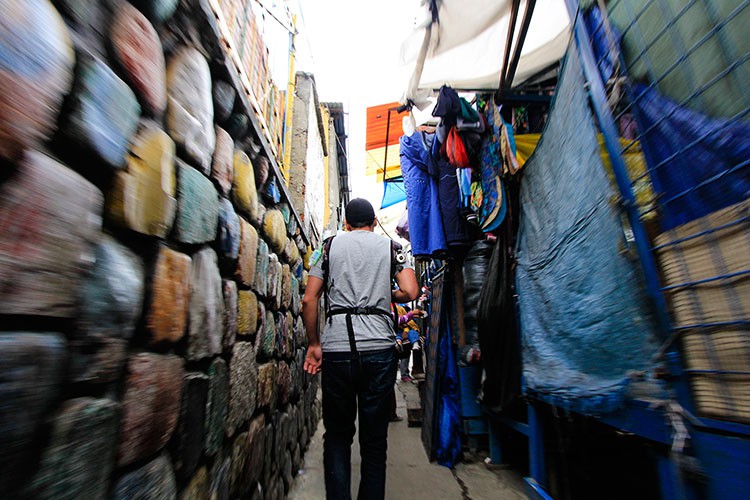 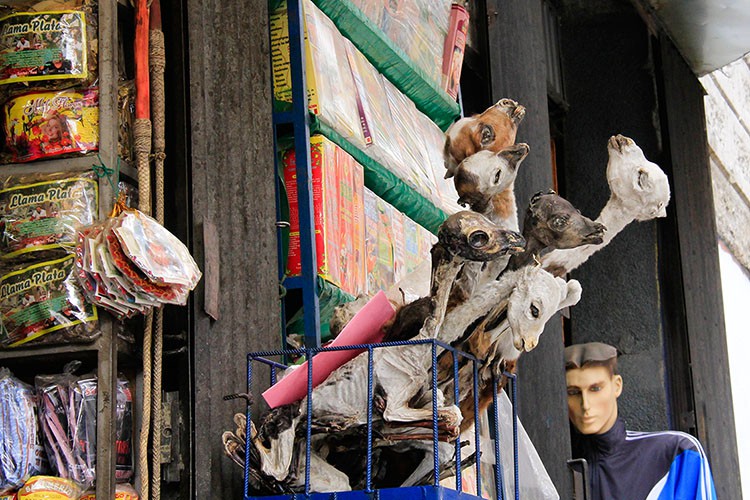 In other areas of La Paz the shopping streets turn quite a bit more colorful and fancier. They seem to have a little something for everyone! 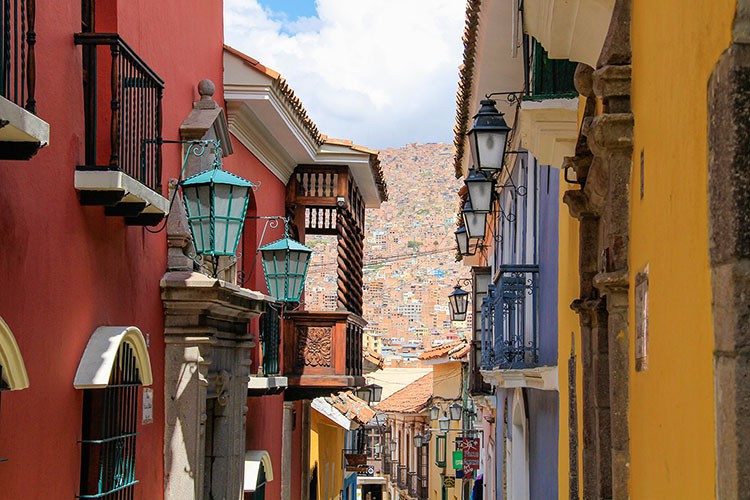 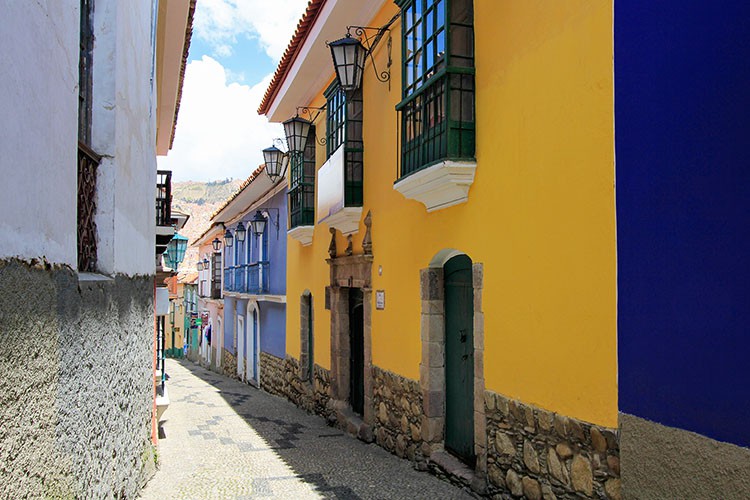 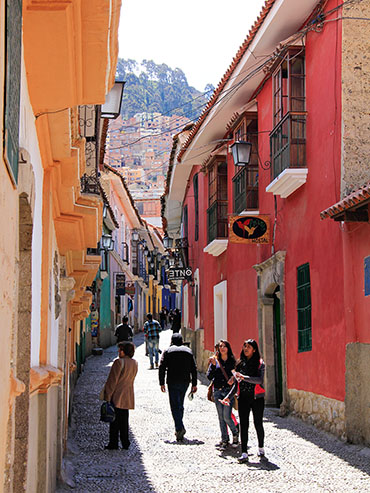 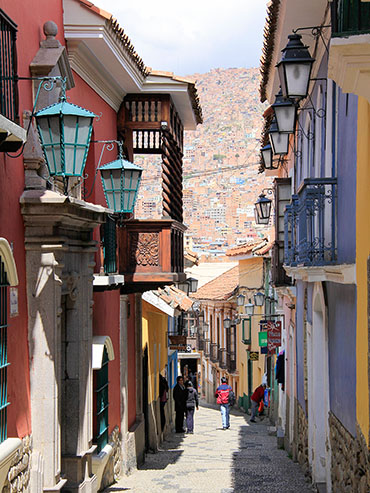 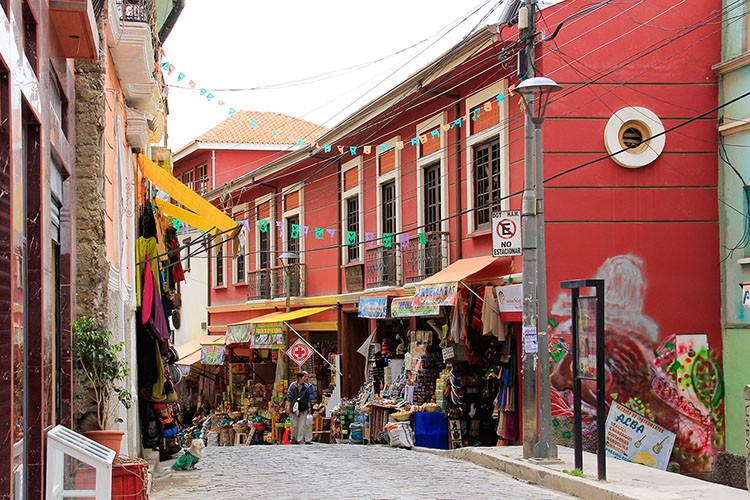 Overall we both really liked La Paz. We never felt unsafe, and instead found that despite being a large metropolis it maintained its heart and soul. We also loved that we could pick any street and get lost exploring. We would highly recommend a visit to La Paz for anyone traveling in Bolivia!