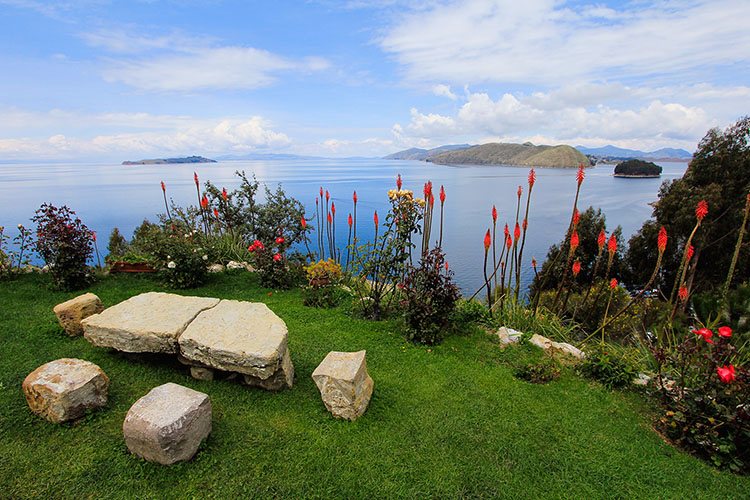 The largest lake in South America is Lake Titicaca, which straddles the border between Peru and Bolivia. As a scenic spot in Peru/Bolivia, we decided it would be worth a visit and booked a catamaran ride to take us around the lake. 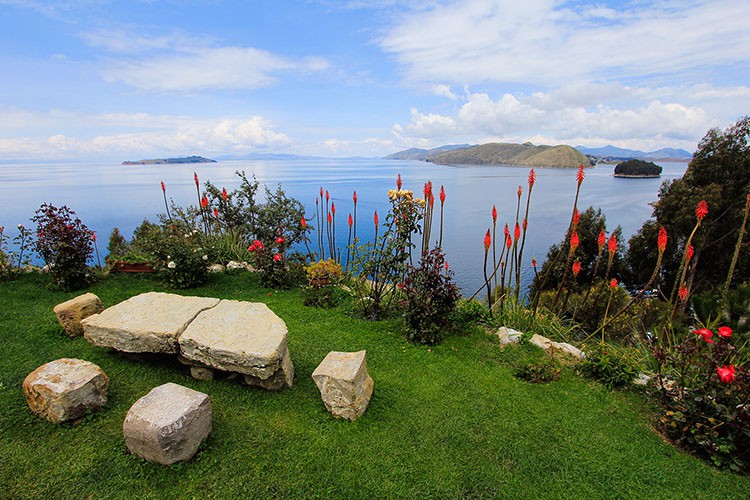 The most popular and touristy area to visit the lake from is in Peru, so we decided to see it from the Bolivian side instead. This required saying so long to Peru and crossing the border into Bolivia. Don’t worry though, Peru is just on pause… we’ll be back there in about 10 days.

The adventure started prior to reaching the border, when we were handed these flimsy sheets of paper that I think someone scanned and printed that morning for us to fill out for border control. It was the most detailed sheet of paper I have ever filled out, asking for my mother’s maiden name, my daily itinerary in Bolivia, and most importantly if I’ve had any contact with Ebola. 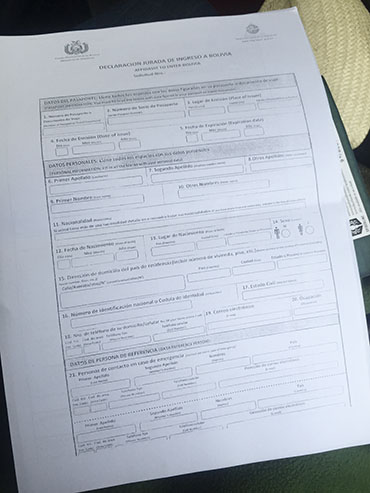 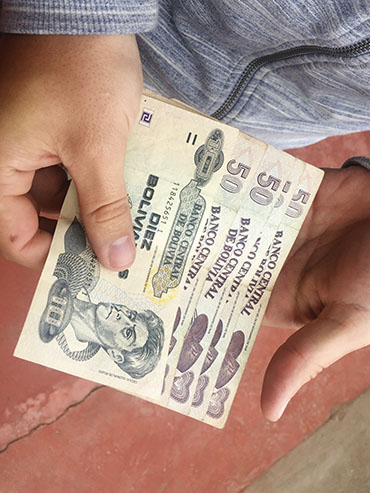 Had we mentioned that this has been something we’ve frequently been asked about during our travels this month? Whether we’ve had contact with anyone from Africa, if we’ve been to Africa, and if we’ve even thought about Africa. Then we’d be in trouble.

We also made sure to convert our money into Bolivianos, or BOBs (how cute is that) for short.

As we reached the border, our bus dropped us off about 100m away and left us to walk across alone. Through the arch we went, saying hello to Bolivia (with a Bolivian lady saying hello back as you can see). Not many guards or security in sight. PS – Excuse the poor quality iPhone photos. 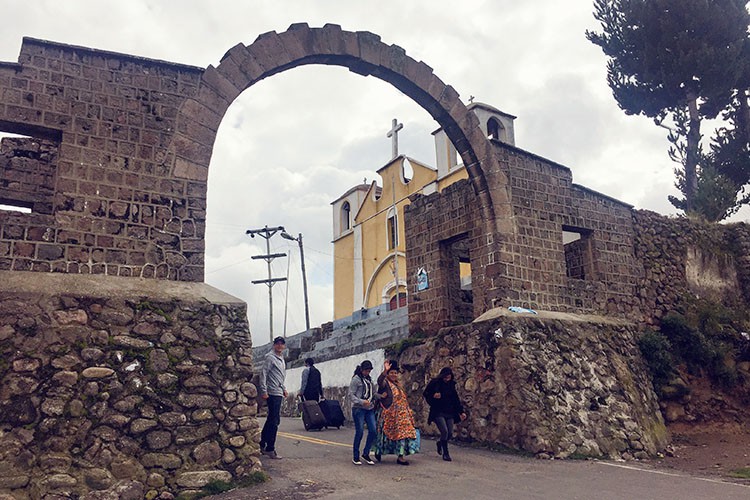 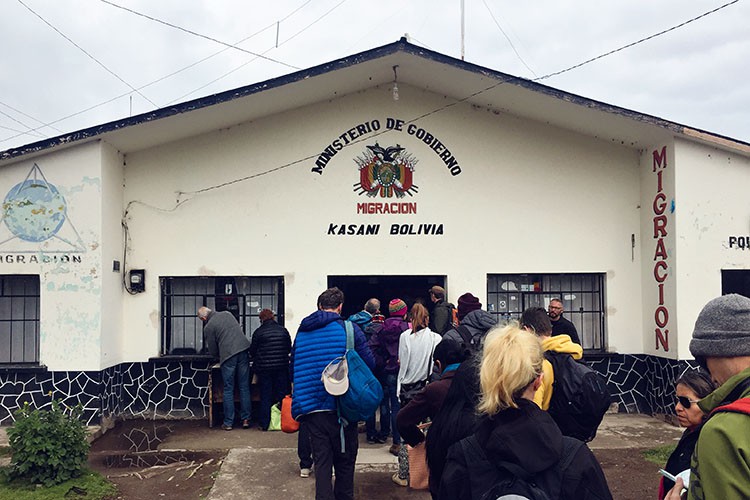 A small building just past the border was where we lined up for a good length of time, had our passports stamped and were quickly set free. We knew we were in a fancy country when my phone informed me that I was now not in 3G or 4G territory, but 3.5G! 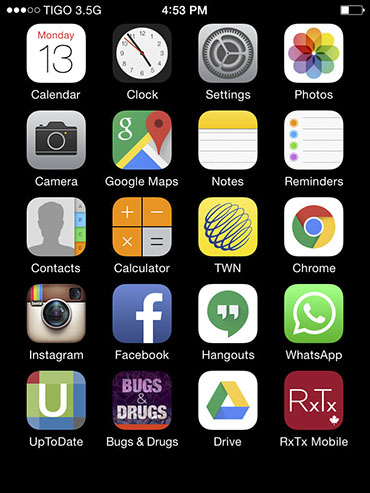 Bolivia is officially known as the “Plurinational State of Bolivia” because it has over 37 national languages and 60% of its population is derived from various indigenous groups. It is also the highest and most remote country of South America. Not to mention one of the poorest, with a population of mainly low-income agriculturalists and miners. 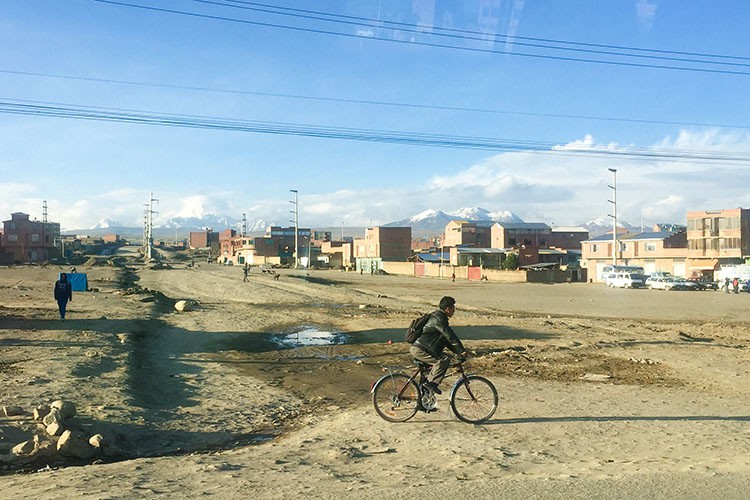 Our first impression was a positive one, as the country’s isolation has resulted in rich culture and strong national pride. It’s always fun to enter into a new country and feel like you “get it” right off the bat. Also, as they are attempting to grow their tourist industry, people are welcoming and seem genuinely happy to have us here. 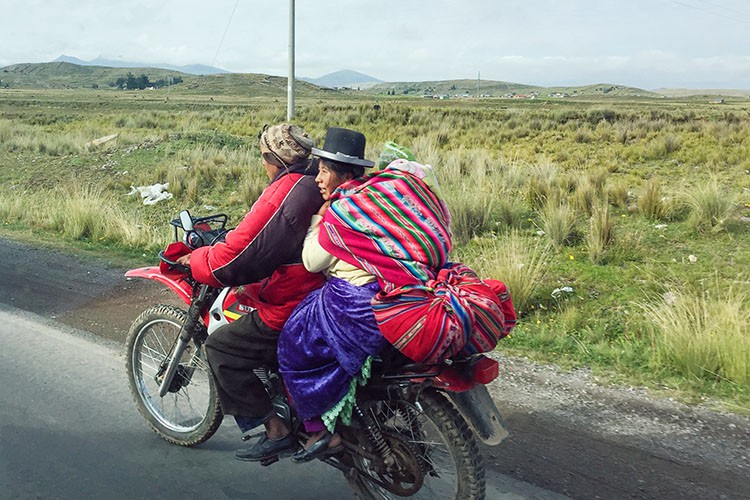 Our first stop in Bolivia was the lakeside town of Copacabana (this is the original “Copacabana” town, but not to be confused with the famous Copacabana beach in Rio de Janiero). The beaches here are home to numerous boats and catamarans ready to take the adventurous out on the waters of Lake Titicaca. 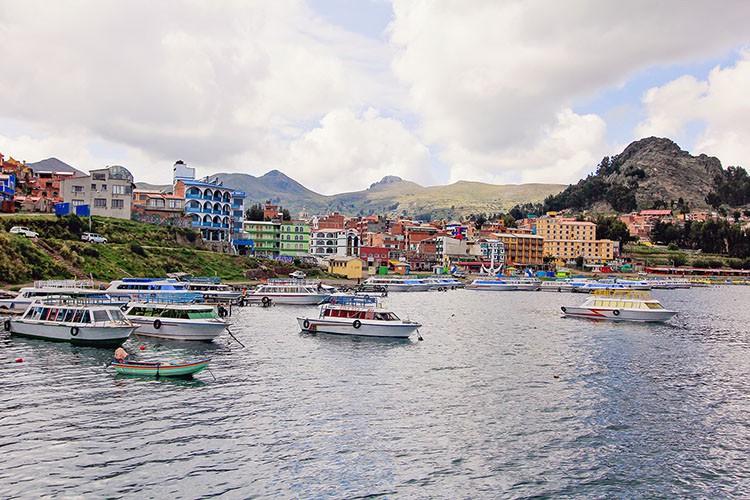 At the center of the town is the Basilica of Our Lady of Copacabana. The main reason I mention it is because outside the Basilica is a little stand of plastic flowers, confetti and champagne. Every day, people bring their newly purchased cars to the church in order to have it blessed for safe travels. A priest comes out once daily and sprinkles holy water on each car. The cars are decorated with flowers and even little assorted hats, and then champagne bottles pop and spray all over each car (or maybe Coca Cola or beer if that’s your preferred style). 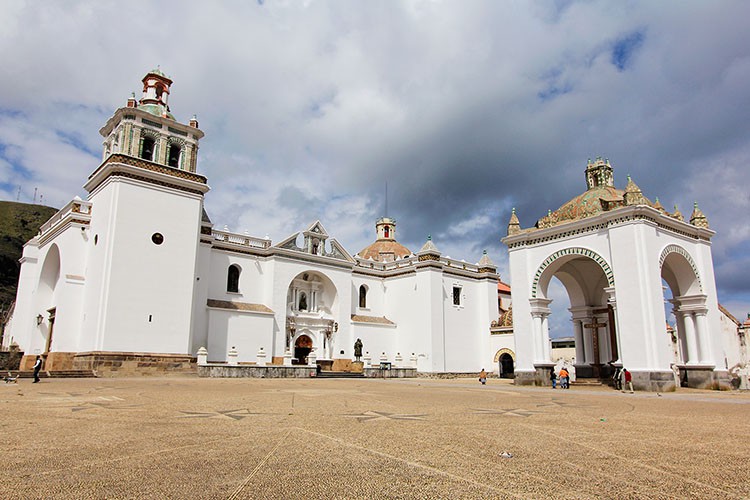 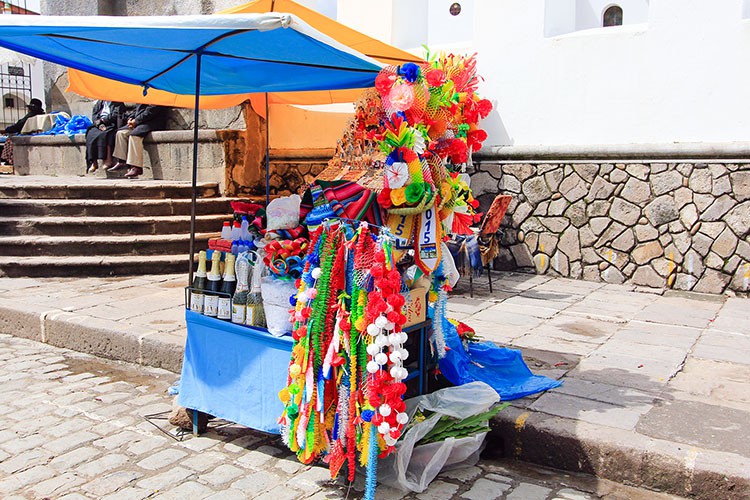 After revelling in this cute tradition, we headed down to the waterfront in search of our boat. 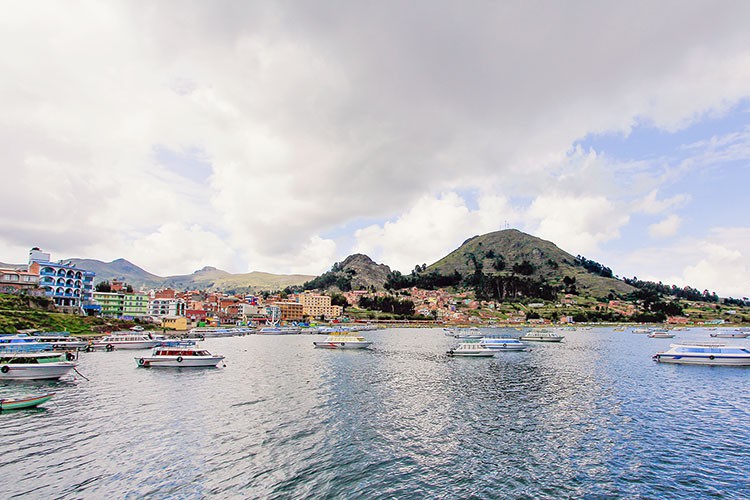 As mentioned above, Lake Titicaca is the largest lake in South America and it also happens to be the highest navigable lake in the world at an elevation nearing 4000 meters.

We spent the day cruising the lake in a catamaran with island stops along the way and meals on the boat. Though we mainly rode on a modern vessel, Lake Titicaca is actually one of the last bodies of water that still has reed boats. These boats are put together with Totora reeds found around the lake and were used by early civilizations for fishing and travel. Lake Titicaca even has entire floating villages made of these reeds! 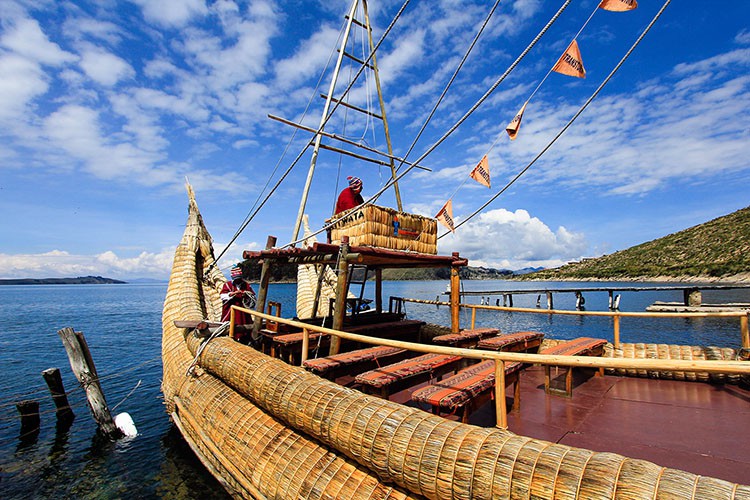 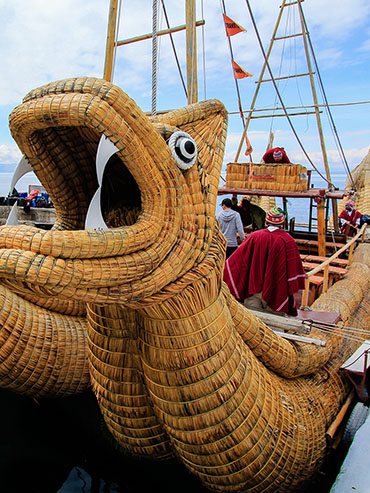 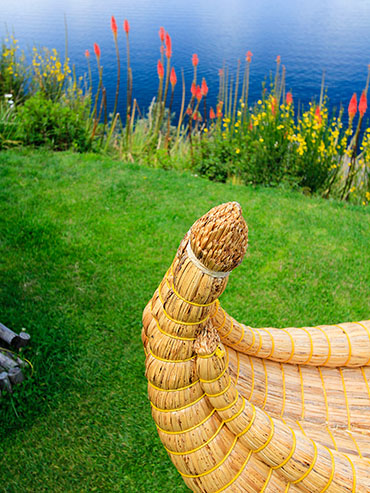 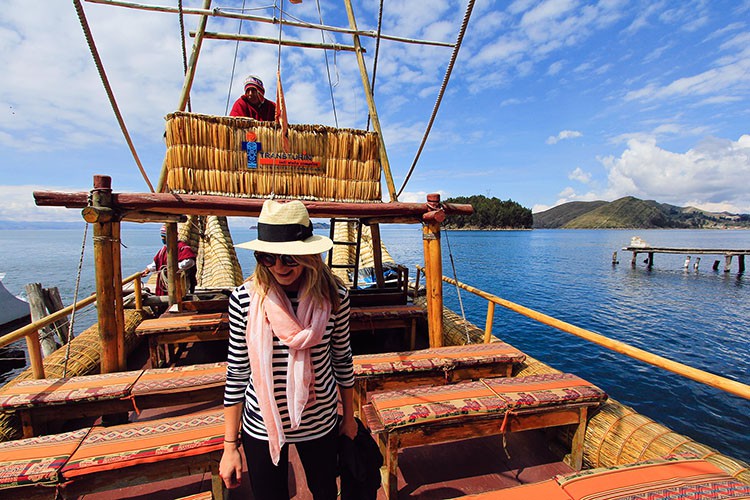 We were lucky to hop on one of these few remaining reed boats for a short ride. While enjoying the scenery, we ended up being challenged to a row-off with our fellow passengers. Which also required some fancy new outfits modelled below: 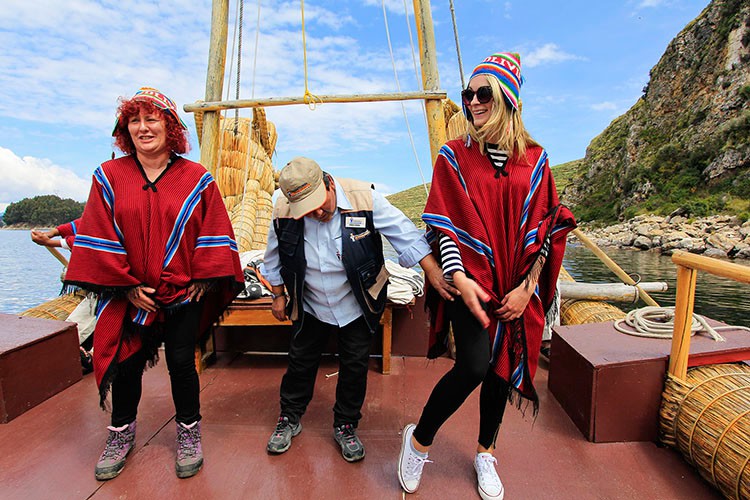 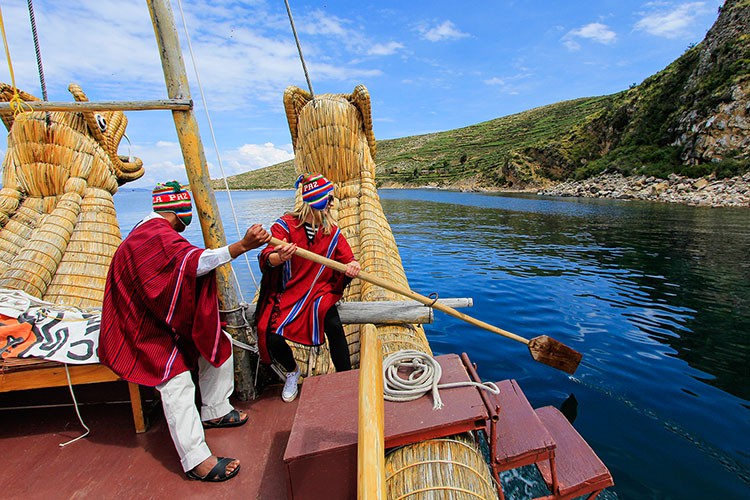 Shane probably did the best, almost falling off the boat when he dug his oar too deep into the water: 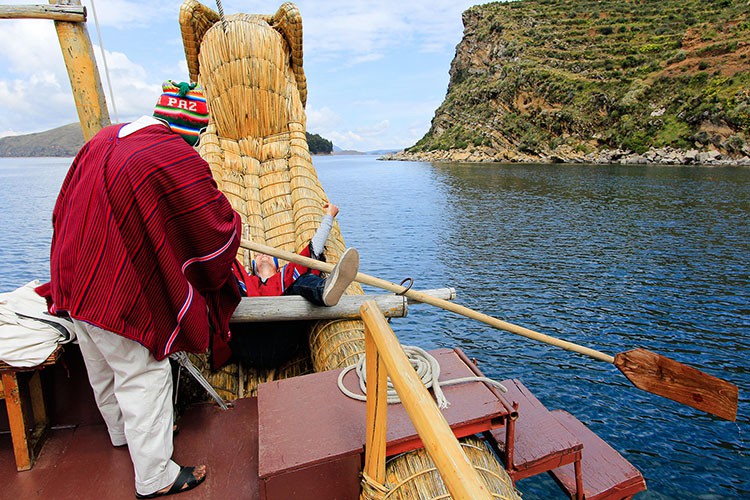 The Island of the Sun

There are 41 islands in Lake Titicaca, the most well known one being the Isla del Sol (Island of the Sun) as it believed to be the birthplace of the Inca Civilization. Which is very appropriate for us to learn about considering we are only a week away from taking the Inca Trail to Machu Picchu. 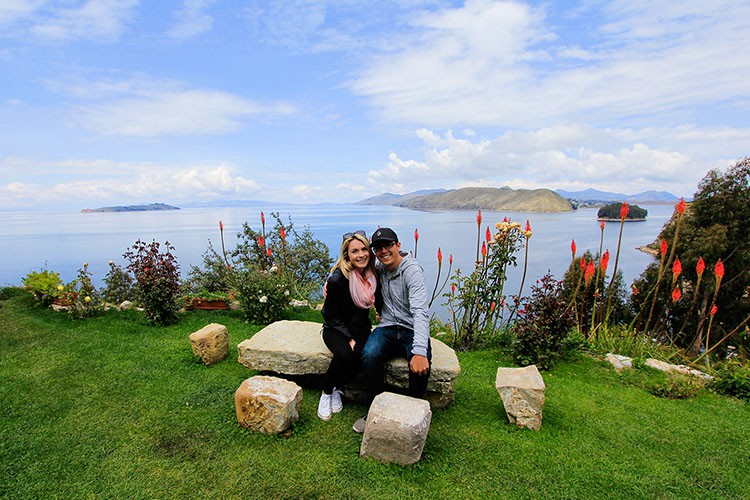 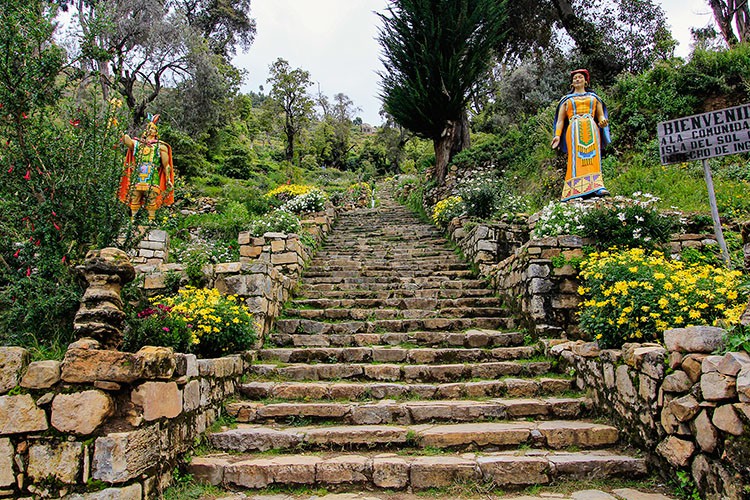 The whole island is quite rocky, and therefore has no roads or cars. The only way of getting around is by hiking, and other than a few hotels for tourists to stay in, it is mostly inhabited by indigenous tribes. 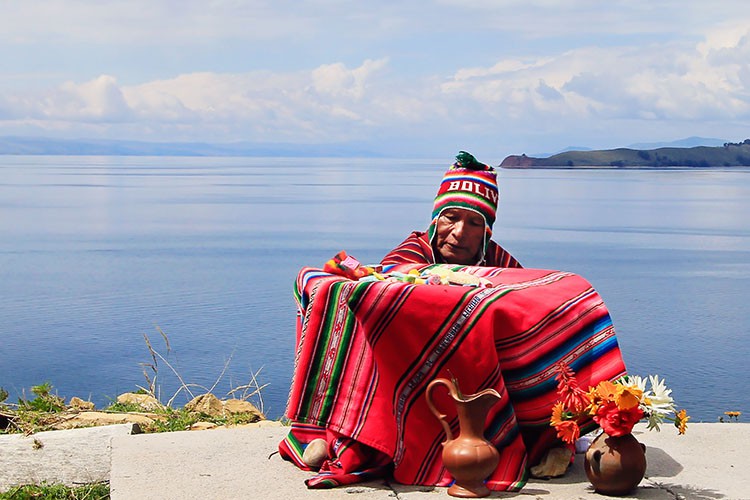 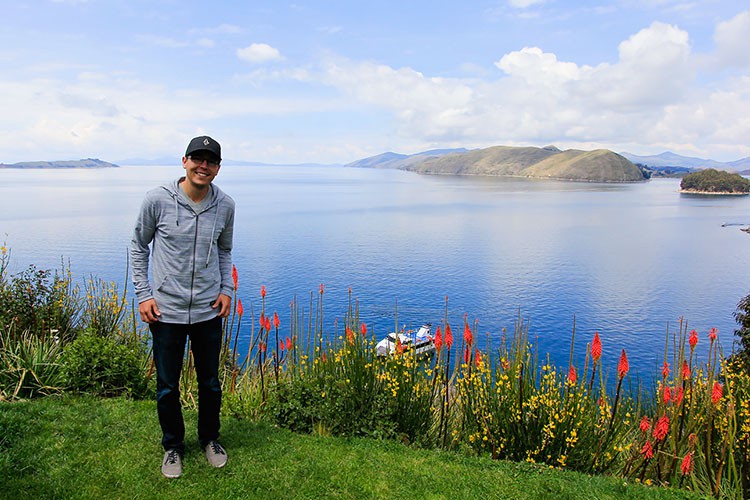 While on the island we had our first up-close-and-personal introduction to Llamas and Alpacas. Llamas are the less hairy ones, with pointy ears and tails. We also learned we have been pronouncing llama incorrectly for years, as “ll” together makes a “y” sound: “yeah-mah”. 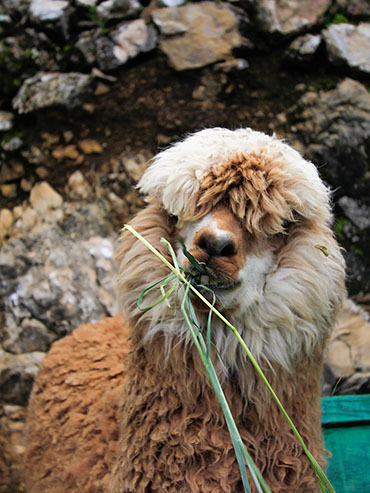 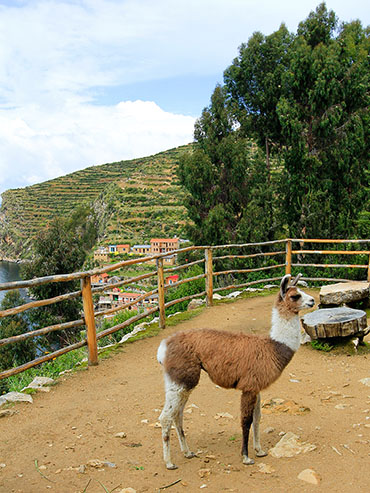 Overall, the lake was a lovely way to spend the day. Though we just cruised along and enjoyed the sites, the lake is really a tribute to history. It houses over a 100 Incan ruins, with more and more artifacts being found regularly. Just recently, a whole ancient temple was discovered under the lake. Who knows what else they’ll find in the upcoming years! 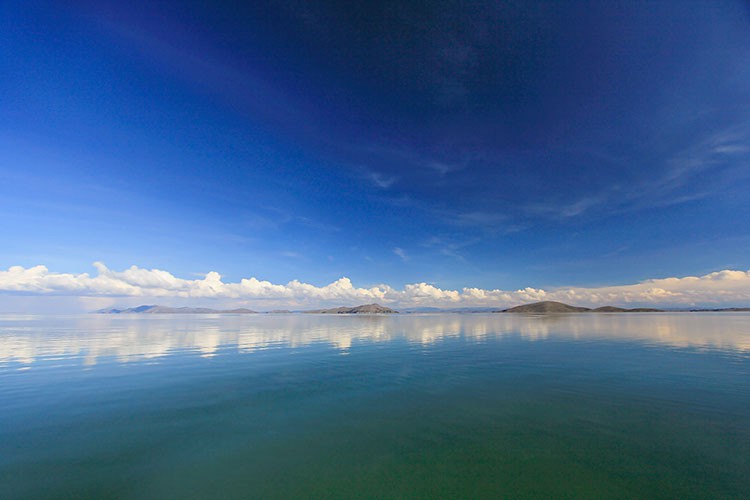