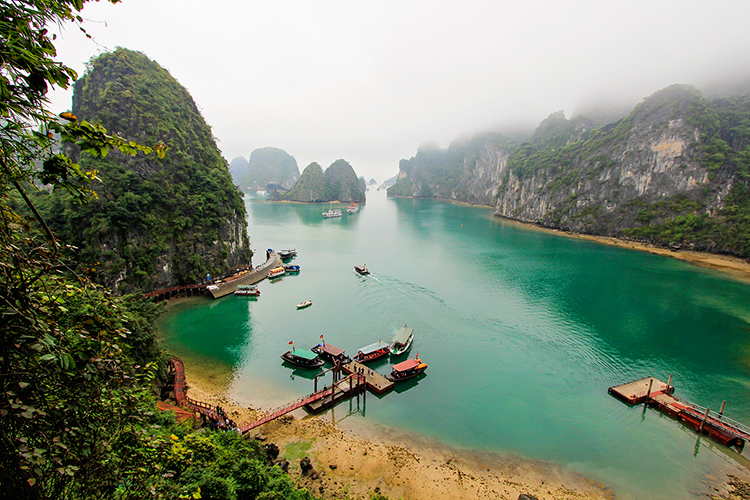 Halong Bay is now one of the 7 natural wonders of the world, and any trip to Vietnam would likely be incomplete without a visit.

The bay is comprised of just under 1000 islands, made of large limestone pillars that erupt from the ocean in great numbers. Because they are so steep, this area is mostly uninhabited by humans leaving it untouched and flourishing with wildlife.

As the bay is now a UNESCO world heritage site, it is well protected and visitation is regulated to a very specific path. This means there is no off the beaten track way of seeing it, resulting in the massive hoards of visitors you see at other big tourist sites (like our recent trip to Machu Picchu). 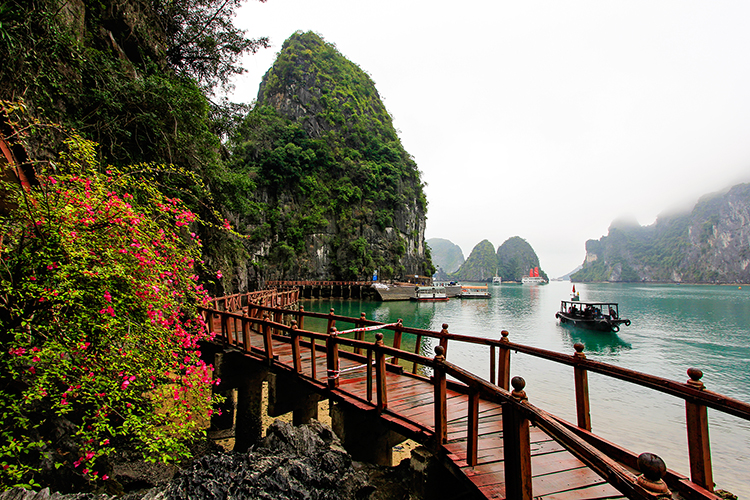 The best way of seeing the bay is to climb aboard a boat. Unfortunately all the boats follow a set itinerary, meaning you set sail with what feels like a hundred other boats, following one another through the same activities. Not our favorite way of seeing things, but there isn’t much choice in Halong Bay! 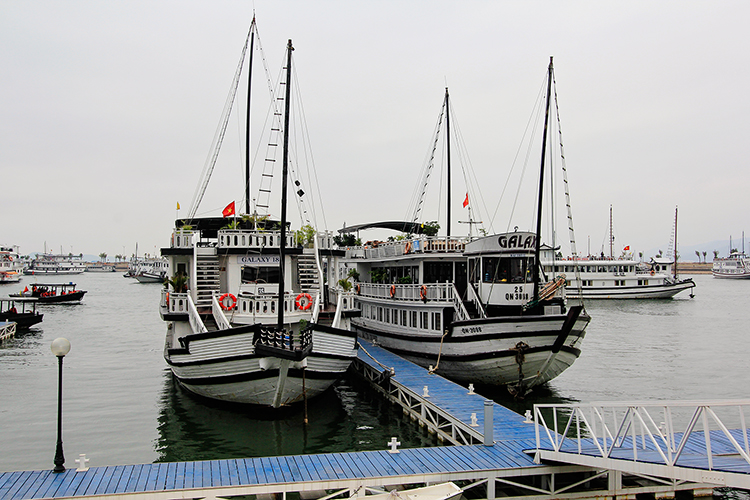 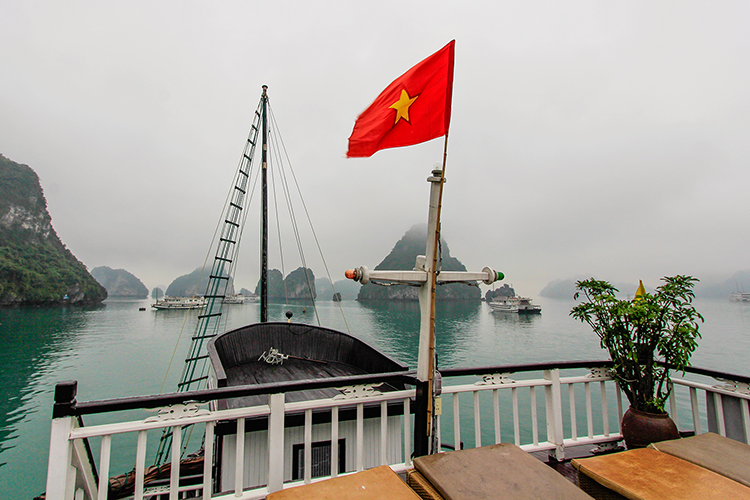 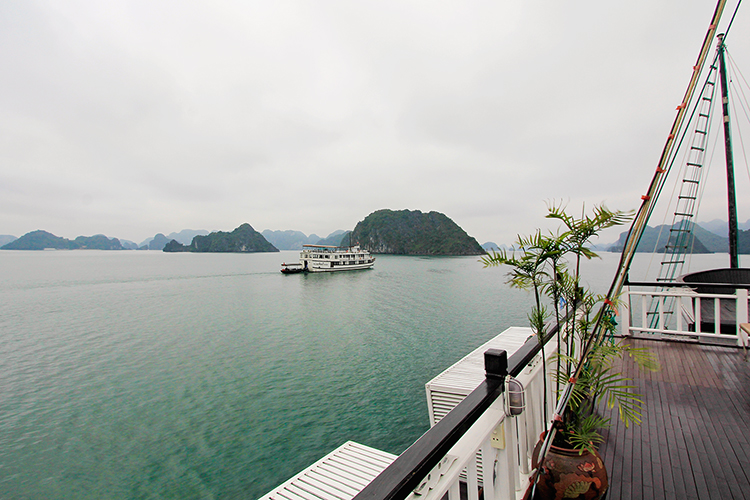 We climbed aboard the boat and met our 13 other sail mates (mostly couples or solo travelers). Our tour guide asked all the members on the boat to introduce themselves and say where we’re from. Despite everyone on the boat introducing themselves individually, the guide decided to introduce our group of 8 on his own, calling us the “Sandra Group” from Canada. Apparently we don’t have individual names, so we were now known as the Sandra Group for the remainder of the trip… 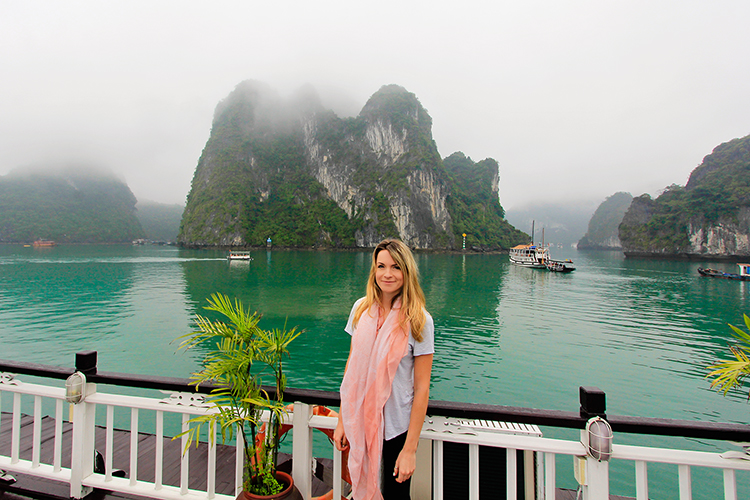 One of the nicest activities while on the boat was stopping to kayak around the limestone rocks. We kayaked in groups of two, maneuvering ourselves between the rock pillars and under several caves, eventually ending in a serene little lagoon where you could trick yourself you weren’t among 100s of other people. We embraced the calm, and then cruised back – racing each other along the way. 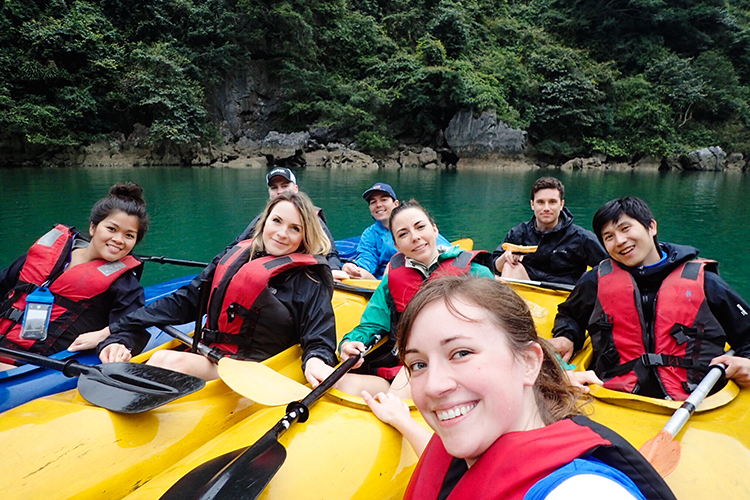 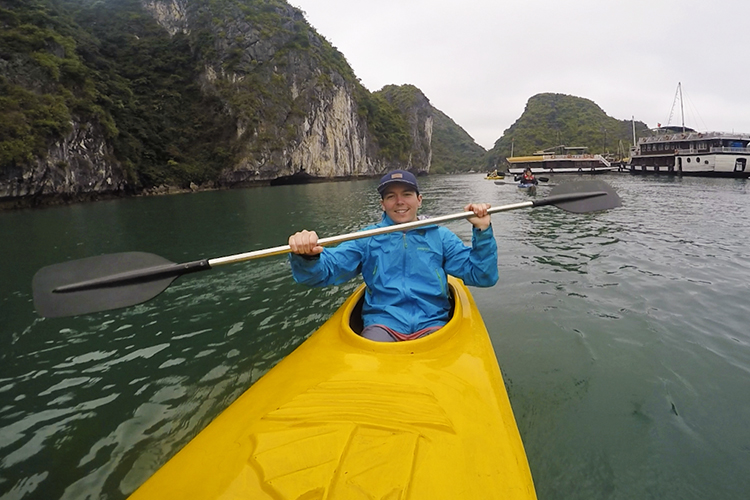 We spent our drinking the night away, playing cards, and reliving all our transgressions from the jar. We also took a go at squid fishing off the boat in the dark, but only managed to capture several jellyfish instead.

The accommodations were pretty good for what you’d expect from a boat. The rooms were tiny and almost completely occupied by the double-sized beds forced into them. 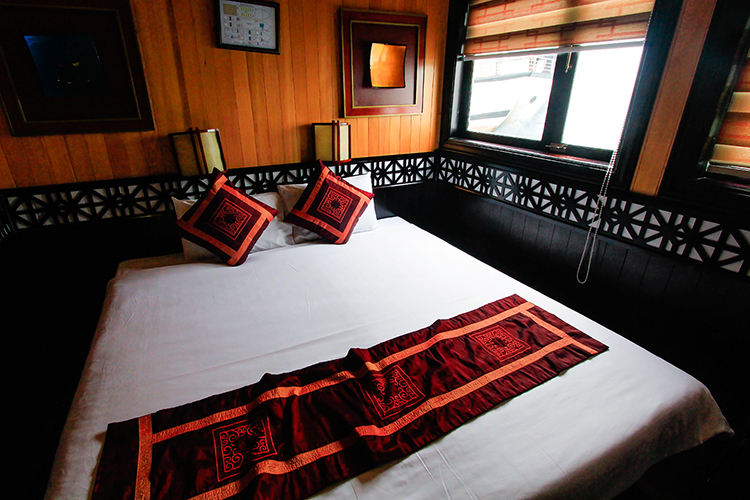 They felt especially small when we crammed all 8 of us into Scott & Carmen’s room for a secret late night drinking party – the result of us becoming the boat “troublemakers” when we brought our own alcohol and were rudely told we would have to pay a service charge for every drink we ingested, which we weren’t told until late into the night when we were several drinks in.

After a surprisingly comfy sleep aboard the boat, we awoke to a foggy and misty morning, giving the whole bay a kind of mystical feel: 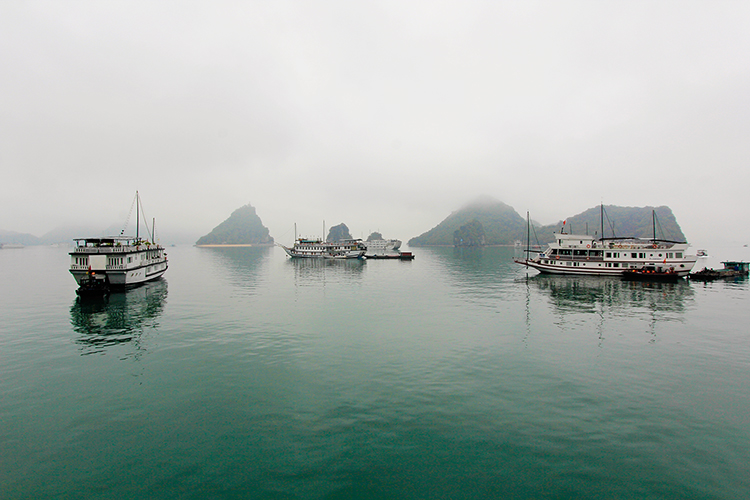 We started the day off with a leisurely walk to a viewpoint overlooking the bay, which was a nice was to get an overview of the area. 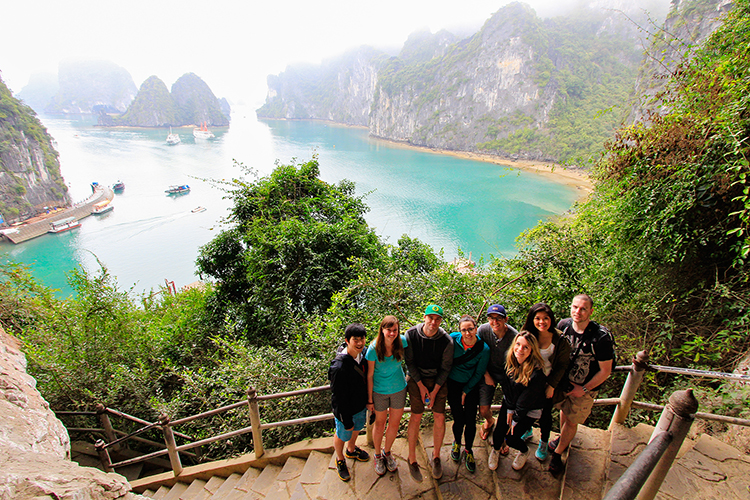 The walk also took us through some massive caves found within the limestone rock. 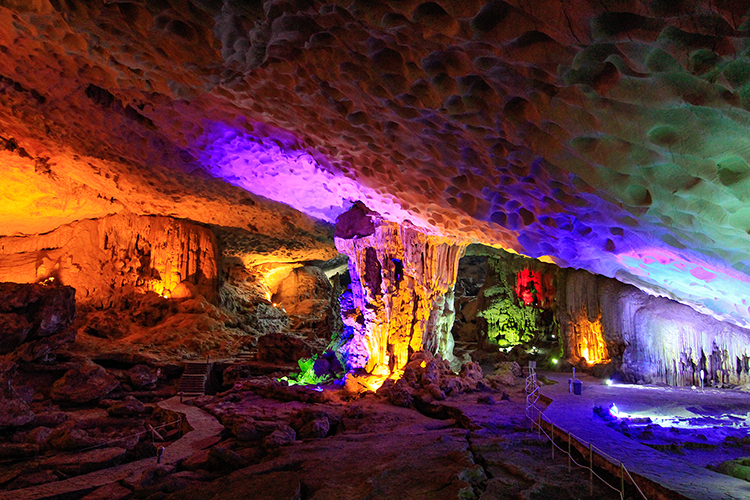 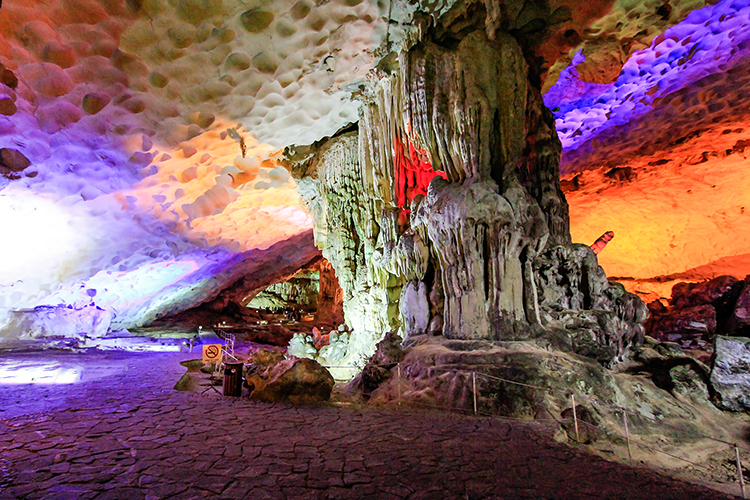 After lunch, our tour of the bay was done. Though beautiful in scenery, the set tourist itinerary took away a little from the visit. If we visit again, we’d probably see one of the lesser known bays in the area, such as Lan Ha Bay to the south or Bai Tu Long Bay to the north. But you can’t go without seeing the beauty of Halong Bay at least once!