Hiking in some places around the souther Utah/northern Arizona border can be quite difficult! Not only did we fail at getting tickets for The Wave lottery two days in a row (only 10 permits per day with over 70 applications) but we only succeeded in getting a permit to hike The Subway Slot Canyon by somewhat inappropriately double booking days. It’s not easy I must say, and as much as advanced planning would have helped, some stuff just comes down to luck.

Either way, we finally secured some hiking permits for the day after we talked to the park ranger, who warned us of a 10h gruelling hike to get to the “Subway” formation. This is an area of the canyon where water carved out a tunnel through the rock leaving a cylindrical subway-like cave. 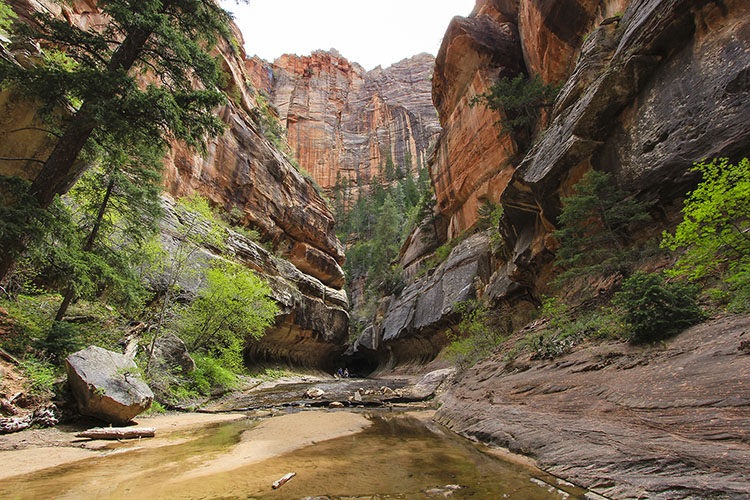 The walk took us along a riverbed which had been impacted by flash floods repeatedly. These are one of the concerns for hiking in this area, as any rainfall results in quick accumulation leading to powerful waterfalls off the canyon cliffs. These push huge boulders, logs and debris… and you can imagine how it would be to get caught in one of these!

But today was a clear day, and we instead crawled up these massive boulders, hopping from one to another to crisscross around the river. Prime territory for spiders by the way, but thankfully I completed the hike without ever spotting a tarantula (despite them being a Zion feature creature). However, we did stumble upon a sleeping snake along the way!

As we neared the end, we would stumble upon cascading waterfalls that felt like a staircase leading us to the final highlight.

And in 3 hours there we were, reaching the best part of our hiking experience: the subway formation. 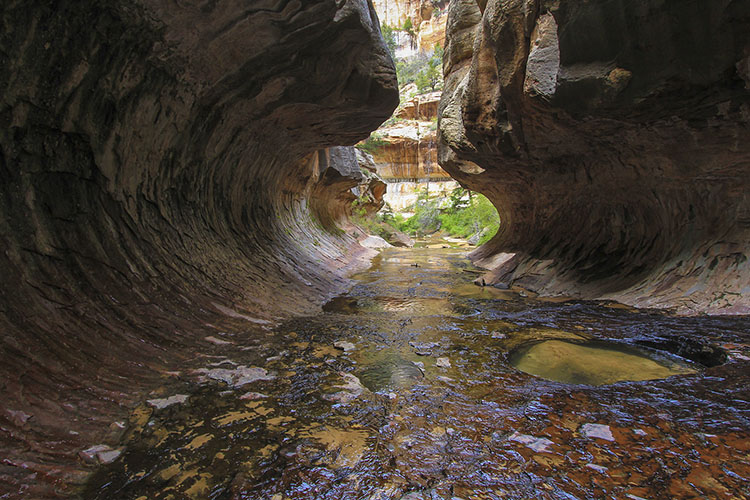 The hike isn’t really strenuous, but requires some agility in maneuvering around the rocks and boulders. We all experienced a fall at some point, myself having one as I was trying to get from one boulder to another, one leg on each one with a rock below. I slipped and fell head first into the rock below, stopping myself just short of impact. The boys laughed at my break dance move, with my two legs splayed up in the air on both boulders, my hands on the rock below with my ear to the rock. 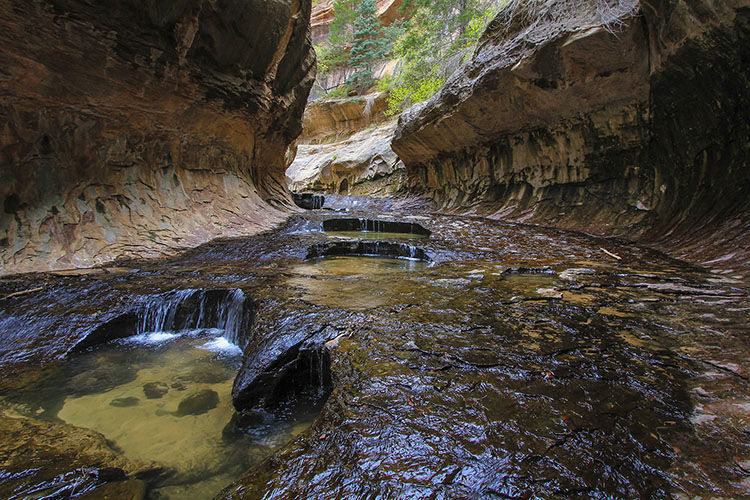 Tomorrow we’re heading out of this area and heading into Arizona!

The Subway Slot Canyon Bottom-Up hike is a great option for those who don’t want to rappel and swim in order to complete the Top-Down approach, but who still want to see the amazing subway formation. The hike can be fairly leisurely, but you are walking along a riverbed, so expect to climb large boulders and get your feet wet walking upstream or crossing the river. The hike is not paved or marked, but if you stay along the river it is hard to get lost. Though initially the trek isn’t too exciting, near the second half waterfalls come into view and the canyon becomes more narrow before the final highlight of the Subway. Keep in mind that all backcountry hikes require a permit, so plan to get one in advance using the park’s lottery service.